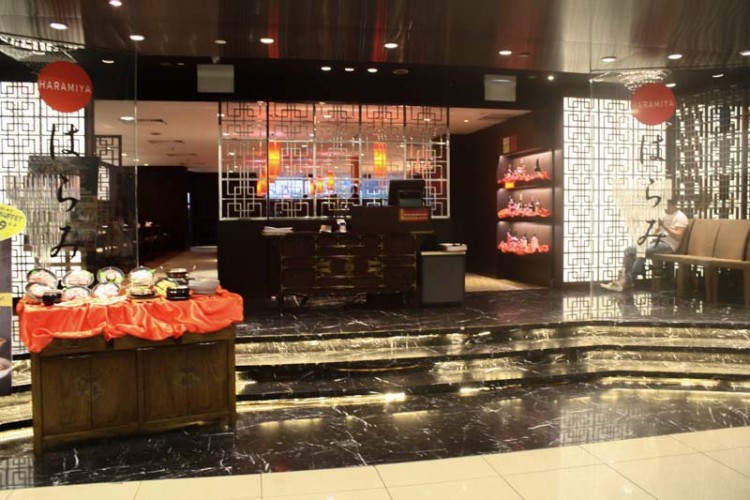 Sitting at a quiet corner in The Central, Clark Quay, Haramiya still manages to draw in a crowd from its wafting aroma of grilled delicacies. Although touted as a Japanese buffet, Haramiya carried elements of Korean cuisine into the mix as well, including kimchi, toppoki (spicy rice cakes) and sweet potato fries (*raves internally). 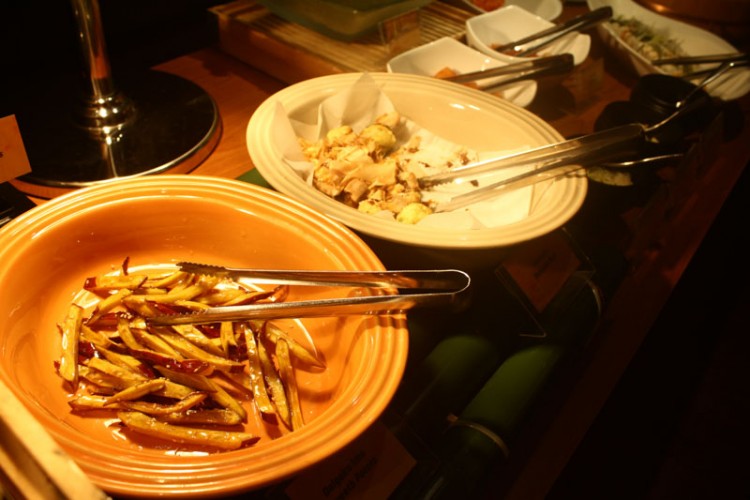 From $27.99++ onwards, Haramiya offers a Hotpot BBQ buffet and could qualify as one of the more value-for-money options for yakiniku buffet here in Singapore, with different concept styles of Japanese cooking all rolled under one roof.

Yakiniku, meaning Japanese BBQ, carries its origins from Korea, and it is thus commonplace to find Korean style dishes in the Japanese cuisine as well. 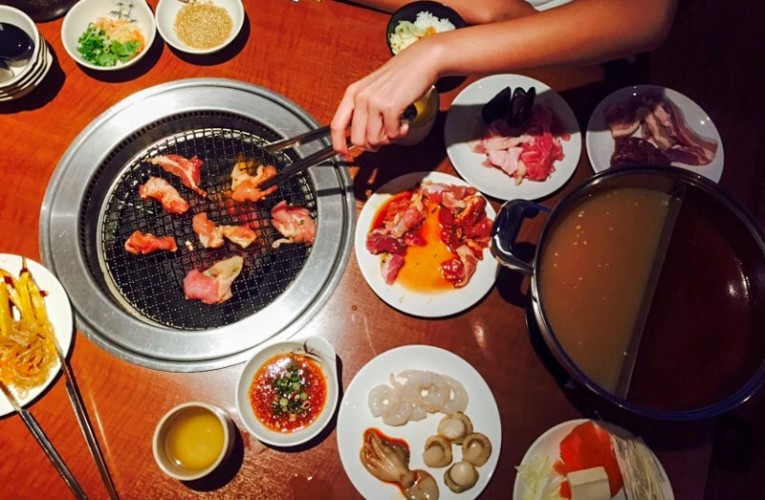 Haramiya’s Yakiniku section reminded us much of the Korean BBQ Singaporeans so love, and with its buffet style concept, guests can alternate between the flavours of both Japanese Shabu Shabu hotpot and their Yakiniku open grill right at your own table. Great way to get the best of both worlds. 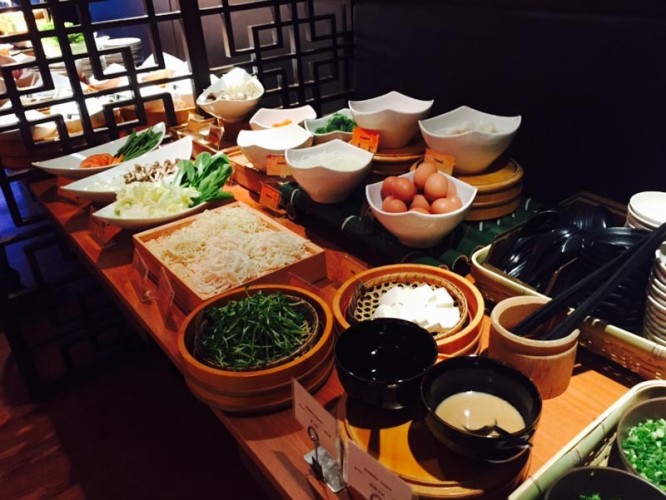 For the Shabu Shabu section, customers can choose between the jjigae, tonkotsu and sukiyaki soup bases for their double-soup steamboat pot. I felt the jjigae base tasted more like its well-known popular korean spicy ramen counterpart, slightly MSG laden, but really tasty nonetheless (probably because of the MSG).

It went well with all of the meat that available (pork, chicken, mussels), and most of the vegetables soaked up the flavourful essence of the soup to entail for a delectable experience. Their tonkotsu (pork bone) soup was pretty creamy and thick, which I liked pretty much. 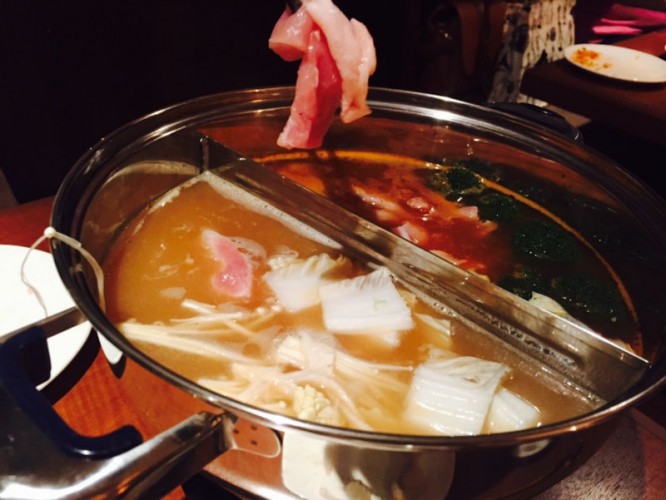 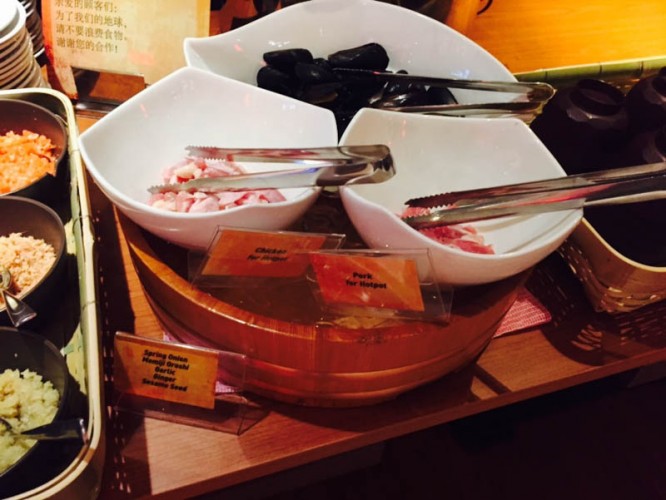 Their meat selection felt quite unsubstantial initially, with just a decent number of slices placed in a huge bowl. Patrons can just pick however much they want first to add into their hotpot, but judging by the amounts they leave in the bowl, the most you can take would be a few slices of each at a time.

It doesn’t really encourage consumption in large quantities, but would prompt you to keep walking back to the bar for refills. I’ll let you decide if that’s a good thing or not.

Fortunately, the service staff were very prompt and attentive, efficiently refilling the meat selection as fast as it was being depleted (even though the topped up amount was still pretty low). I guess you would need that extra exercise anyway, and maybe, just maybe, you can fit just a little more onto your plate. 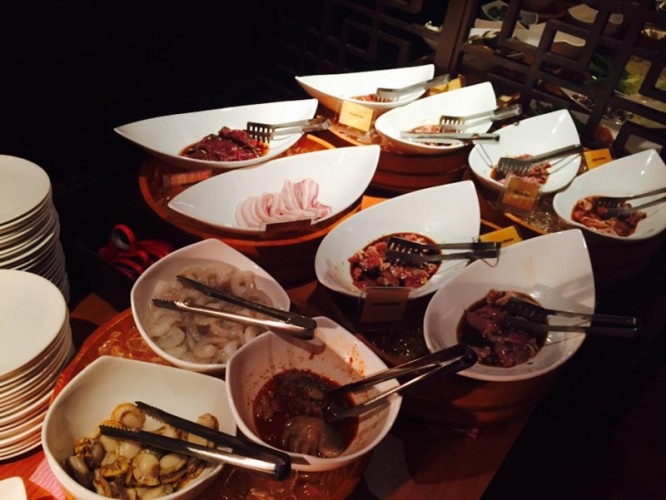 Offering a wide selection of different marinated cuts and types of meat, the Yakiniku section of Haramiya proves to be the star of the show. Honestly, to me, they all tasted pretty much similar after being grilled on the BBQ stove, but props to Haramiya for making their meat so tasty.

Most of the meats were easily palatable, and the marinade was well-integrated into the chicken, pork and beef alike. There were choices for lean or fatty cuts (say yes to pork belly), and also different types of marinade. This probably sounds like a sales pitch but do try all of them; they are all delicious.

Their seafood selection included fresh prawns, scallops and marinated octopus (which was extremely fascinating to watch it being cooked).

Overall, Haramiya proved to be quite a good choice for a Japanese buffet, with both Yakiniku BBQ and Shabu Shabu free flow under one roof. Considering they both fetch quite high prices in restaurants on their own, $27.99++ is actually quite a steal, given the choice of quality meats over at Haramiya.

Not to mention they provide one of the most amazing sweet potato fries that you have just got to try. The only drawback is that you have to keep on walking back to the buffet line to get more meat from that minuscule bowl, and after a while, you just don’t really feel like eating anymore. I mean, depending on your individual determination.