When you find a stall at a void deck coffee shop that’s been around for over a decade, you know you can expect quality food. Hualong Fish Head Steamboat had a humble beginning in 2003, and has since grown into a neighbourhood favourite for Ang Mo Kio residents. 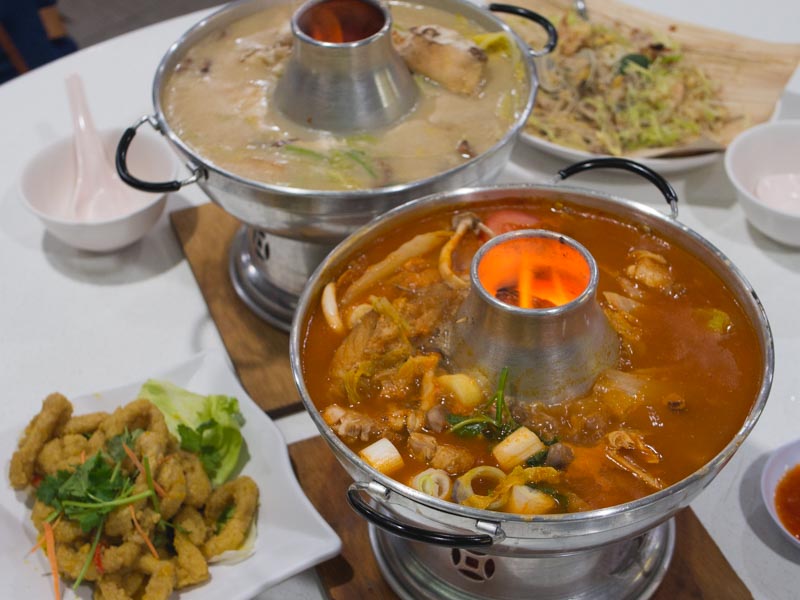 Located at Ang Mo Kio Avenue 3, Hualong’s signature dish is, you guessed it, the Charcoal Fish Head Steamboat (S$28.80 for small, S$38.80 for medium, S$48.80 for big). You can choose between the red grouper and pomfret fish, both good choices for their firm, yet delicate meat. You can also choose between two soup bases; one of which is something I’ve never tried before, the tomato-flavoured fish head soup. Any ketchup fans here? 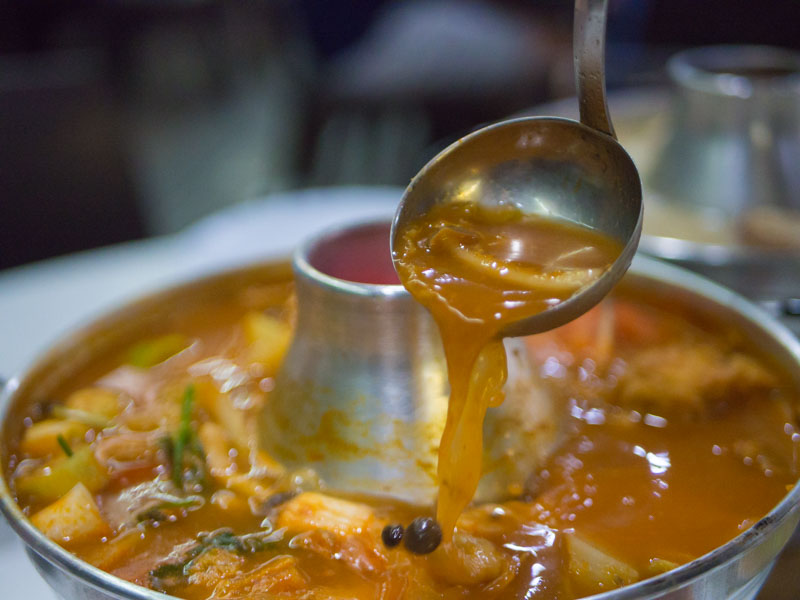 The steaming, tomato-red soup was subtly sweet with a zesty taste. Yes, it did taste a little like ketchup, but it wasn’t overpowering. I wanted to order this with the pomfret but they ran out that day, so I had the angkoli (red snapper) fish instead. 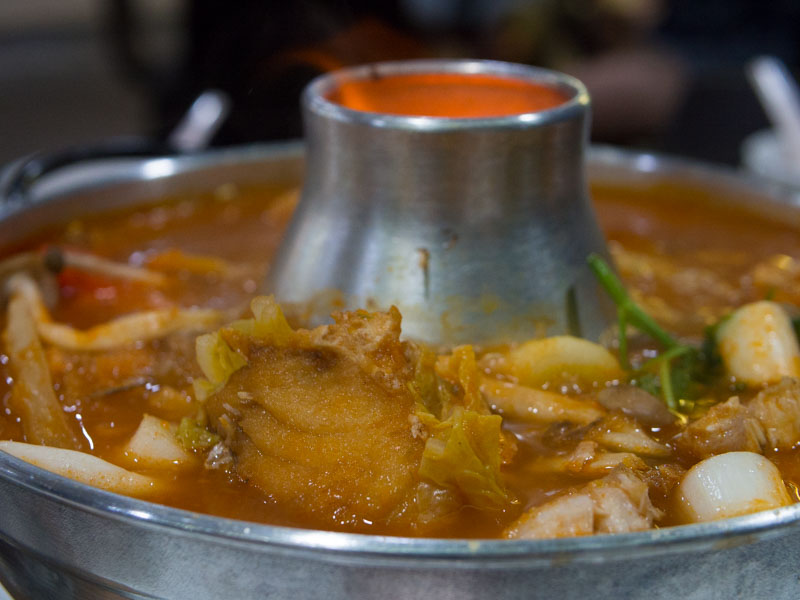 The fish was fried first before being tossed into the soup for cooking. I liked how it was slightly crispy on the outside and tender on the inside. Although, I did feel that the taste of the tomato slightly overwhelmed the fish. 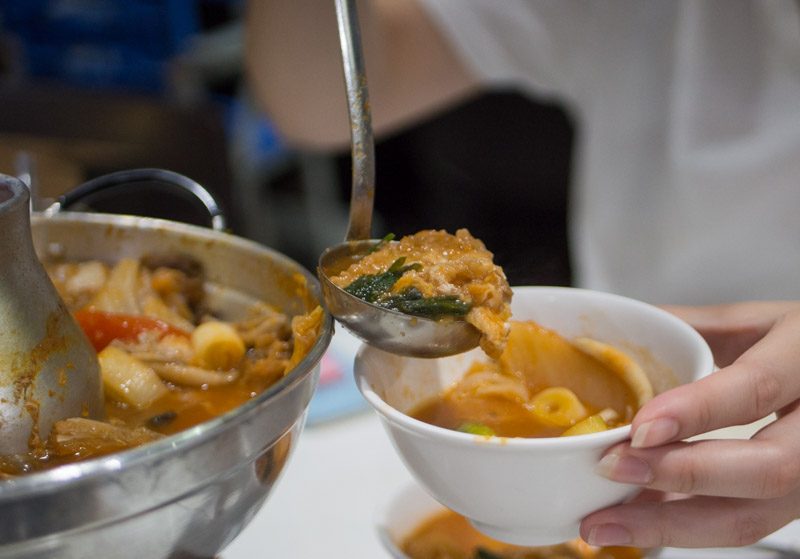 The vegetables benefited greatly from absorbing the soup, as it gave the abundance of cabbages a tangy taste. There were big slices of tomatoes in the soup as well. I don’t think I’ve ever liked eating vegetables that much.

I was also pleased to find pieces of yam in the steamboat. They were all smushed due to the boiling temperature of the broth, but I liked it that way. So I tried the tomato-flavoured soup, what now? Well, of course, I had to get the original too! The soup of the original Charcoal Fish Head Steamboat was extremely refreshing, and I could taste the sweetness of the red grouper that’s infused in it. It is prepared for hours over the heat of charcoal, giving it a smoky aroma when served. A whiff of that made me want to gulp down the entire pot. 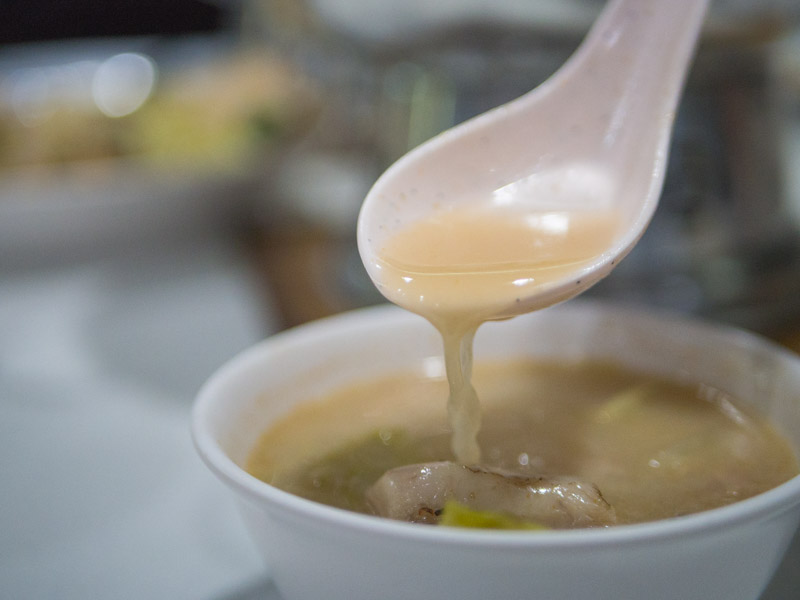 The broth is free of MSG, and is prepared using a variety of ingredients, including anchovies, yellow beans, and rock sugar. It’s a secret recipe of theirs, so if you’re thinking of recreating the same taste at home, you probably can’t. The red grouper meat is tougher, but that was just to my liking. It was wonderfully cooked with the skin providing a little texture, which gave a more intricate mouthfeel. There was absolutely no ‘fishy’ smell or taste to it either.

This version of the steamboat comes with cabbages and yam too. They complemented the dish well, and I especially enjoyed eating a mouthful of cabbage, yam, and fish all at once. Besides the signature fish head steamboat, Hualong serves delicious zi char dishes as well. 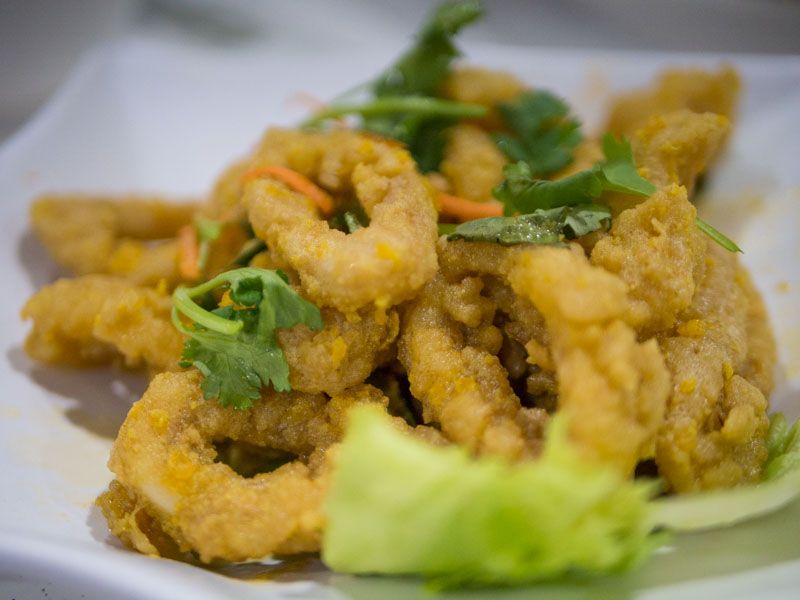 The Crispy Salted Egg-yolk Calamari (S$15 for small, S$20 for medium, S$25 for big) was heavenly. Not too salty, not too greasy; the calamari had a thin batter that oozed with flavour. The salted egg yolk craze may have died down a little now, but this is a dish not to be missed. Another dish they consider a signature is the Wok-fried White Beehoon (S$6.50 for small, S$9 for medium, S$12 or S$18 for big). This one was really incredible, and I possibly liked it even more than the fish head steamboat.

The dish was lacking a little in wok hei, but it was still very flavourful. It came with prawns, slices of pork, and clams, and the vermicelli was stir-fried to perfection without too much oil. This was Chinese food done right.

With a generous portion of fish in the soup and a delectable variety of zi char dishes on the menu, Hualong is a fantastic place to bring your friends and family for a nice meal. The tomato-based soup was delightful and I personally prefer that to the normal soup base. Just remember to order the bigger pot if you’re sharing with a large group!

The place is usually packed to the brim during the weekends, so I do recommend you call in for reservations.