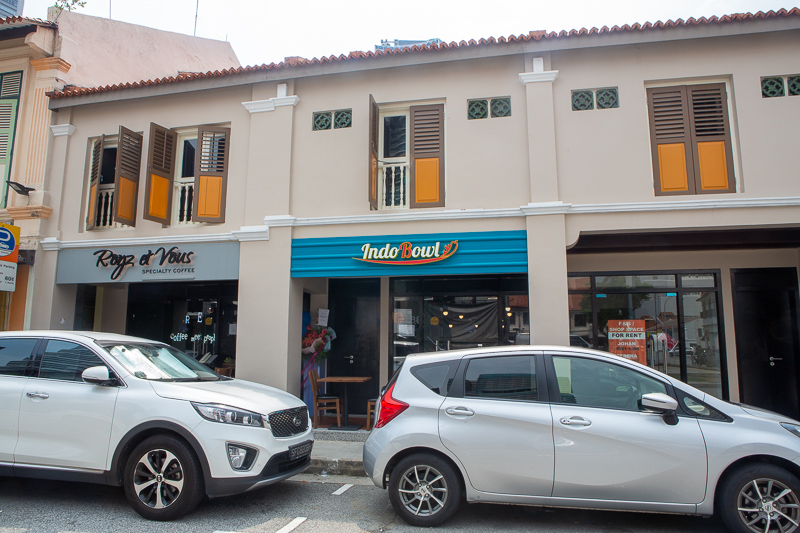 Haven’t had enough of your Indomie instant noodles at home? Well, here’s a new dining spot for you.

IndoBowl is Singapore’s first halal Indomie cafe located at Bugis that opened in October 2019. The cafe serves up delicious Indomie dishes, along with delectable sides. Kampong Glam is Singapore’s oldest urban quarter and used to be a thriving port town. It is now home to an eclectic blend of Malay and Arab history and culture, accompanied by a hipster lifestyle scene. 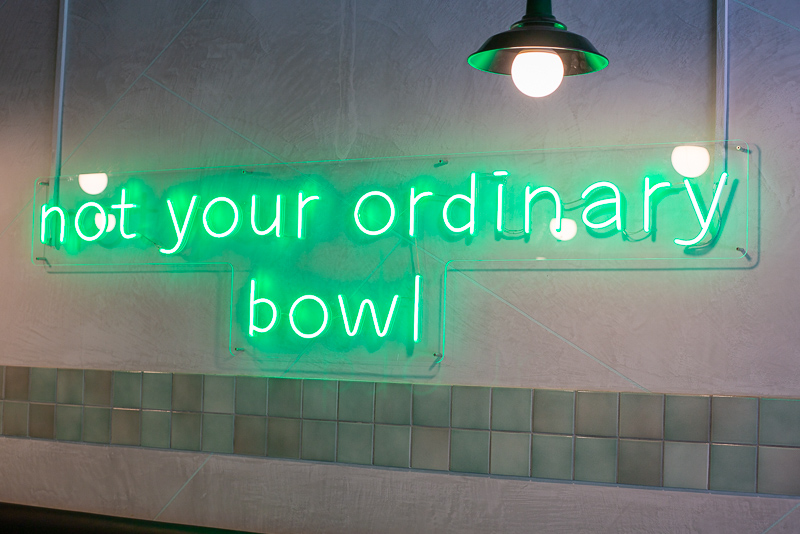 We noticed the lovely green neon sign stating “not your ordinary bowl” and several other turquoise elements like the display pieces, chairs and marble tiles on the walls—seems like there’s a green theme going on here. Probably the biggest hit at the cafe since its opening is the IndoMie Mumbo Jumbo (S$49.90). This gigantic platter is more than enough for three to four people and consists of approximately four to five packets of Indomie. Alongside the noodles are a variety of meats like ribeye, lamb chop, lamb bakar (barbecued lamb) and beef satay.

Most of the meats were quite tender, save for the lamb bakar which was relatively hard to chew on. My favourite meat would probably have to be the ribeye as it had a nice smoky fragrance and was quite tender.

If you’re coming with a large group, I’d definitely suggest getting this indulgent platter to share! 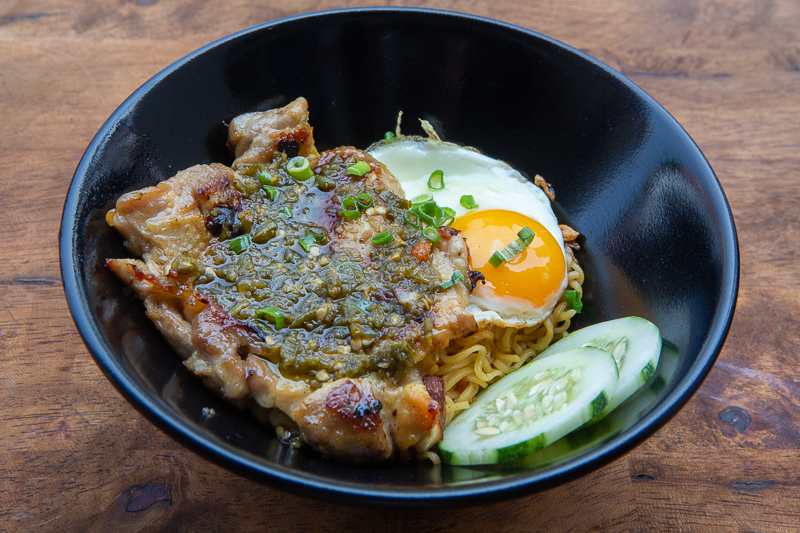 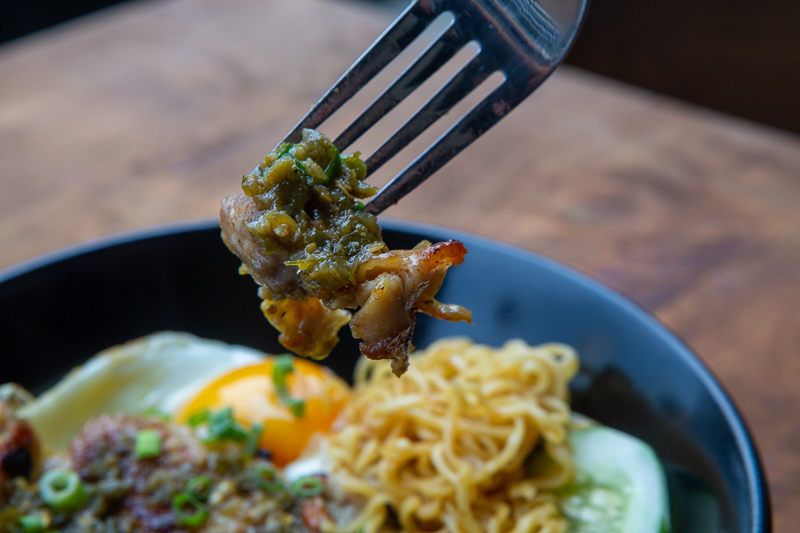 The Indomie noodles were bouncy and accompanied by an egg, chicken and cucumber slices. The chicken was charred to perfection—the skin was crispy yet the meat was still juicy and tender inside.

The sambal really packed a punch and I felt that it was on the spicer end for me. Those of you with a higher spice tolerance will probably be able to appreciate the dish better. 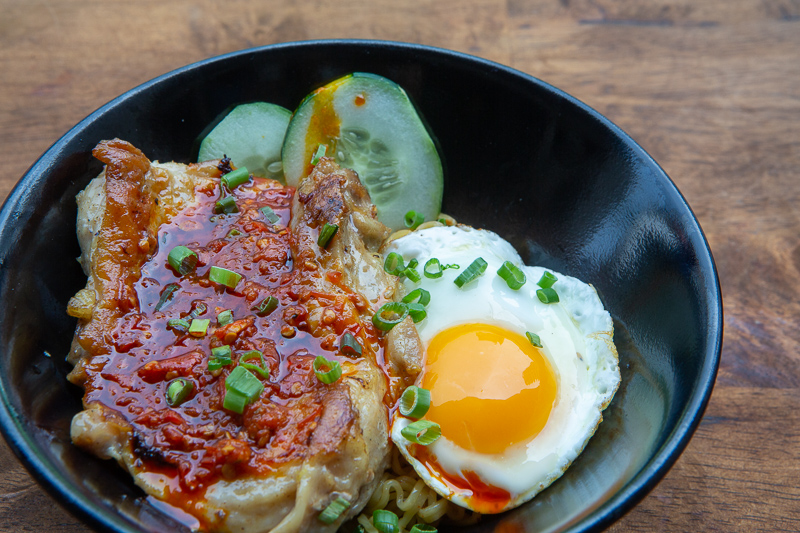 The Indomie Ayam Bakar (S$9.90) comes with sambal balado sauce that holds a bold, spicy flavour and a striking red colour that scared me a little in the beginning. The sauce is known to be native to the Padang (Minang) cuisine in West Sumatra. As much as I tried to appreciate the sambal, it was really quite spicy for me. This dish also came with a slice of chicken and had springy Indomie that I savoured with much delight. 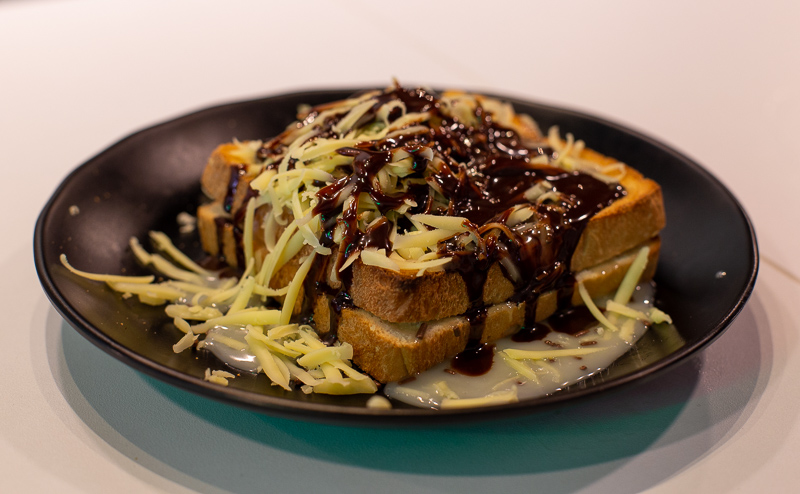 For dessert, we decided to get the cafe’s house favourite Ropang Coklat Keju (S$3.90). It directly translates to “peanut butter chocolate”, but this dessert is essentially baked bread topped off with condensed milk, mozzarella cheese and drizzled with melted Hershey’s chocolate. The bread was light and fluffy and the toppings were extremely indulgent. As a chocolate fan, I really enjoyed this dessert. However, this decadent dessert might be too sinful for some. So I’d say, ingest the calories at your own risk!

I felt that the dishes at IndoBowl were evidently on the pricier side and weren’t as worth it as I had envisioned it to be. The dishes are basically just instant noodles, accompanied by meats and fried egg.

However, I have to say that the service at the restaurant was exceptional, which was honestly the best part of my visit there.