There was a bit of commotion when IZY FOOK opened its doors. This new mod-Sin establishment is the collaborative work of 987FM DJ Sonia Chew, the owners of Roast Paraside, and Izy Dining & Bar. Club Street is home to plenty of restaurants and bars, but given that it’s a saturated territory, it does sometimes see a change of hands from one business to another. Such is the nature of the F&B industry in Singapore. The shadow of Izy Dining & Bar still lingers; the layout remains intact with the long bar flanking your right as you enter. The sit-down dining area is right at the back and is a cosy nook that you wouldn’t expect to find, should you simply be passing by. Central to this dining area is a painting—it could be a poster, since I didn’t inspect the art closely—that includes a mishmash of Japanese-influenced pop art and Western motifs.

The cuisine here is apparently labelled as mod-Sin, but I felt like the ghost of Izy Dining & Bar was still very much in the building. The evening started with Beef Tartare (S$12), served with crispy yam chips. I don’t often order beef tartar; I’m more a beef carpaccio girl. This one had a kick of horseradish, which got me hook, line and sinker.

The NZ beef was slightly chewy yet smooth, balanced well with cilantro and balsamic. I definitely preferred it over the next appetiser that arrived. On paper, the Club Street Clams (S$13) that were slathered with dry shrimp sambal and peppered with panko crumbs seem divine. Be sure to spritz enough lime for that extra zest! Cooked on a josper grill, the clams carried plenty of heat, although there was a disconnect between the clams and the dry shrimp sambal. The sambal had too much authority on the palate, which masked the clams’ natural taste. The Crispy Tofu (S$11) wasn’t what I’d anticipated. Looking like a maki sushi roll, its enveloped in yaki nori before being drenched in batter, and deep-fried. Chilli bean sauce was dribbled sparingly across the tofu slices. It brought about familiarity, much like the fried tofu we enjoy in our local dishes, but therein lay the problem. It was disappointingly lacklustre in terms of flavour, and the chilli bean sauce was its only saviour.

Although it packed a spicy kick, there was only so much it could do to save the bland, but crisp tofu. I would suggest that the batter be seasoned prior to taking a plunge into the fryer. The pedestrian Bok Choy (S$10) was a let-down from the moment I popped a leaf into my mouth. The goma dressing (a sesame-based sauce) was akin to a Thousand Island dressing and the greens themselves were without an ounce of seasoning.

There was no excitement nor any motivation for me to finish this plate, resulting in me having to convince my dining partner to help me finish it. I simply couldn’t wrap my head behind the intention of this seemingly disjointed dish. I did, however, enjoy the Apollo Roasted Spring Chicken (S$15 for half, S$28 for whole) and its soy marinade. The ginger and scallion dressing really brightened the roasted poultry, and I was so glad that there was ample juiciness, even in the thickest, fleshiest parts.

The surprise was that it was marinated in orange juice and rum overnight as well, which gave it a nice sweet finish. The show-stopper arrived—Char Siu (S$10 for small, S$20 for medium, S$40 for large, S$75 for XXL)— and I was really setting my expectations high. I’ve read beaming commendations for this dish, so it had to be exceptional. Alas, there was something off about the Roast Pork. It wasn’t that it tasted unsavoury, but it lacked the toothsome fattiness that I have come to associate with the dish. The flavours were all present, but the succulence was nowhere to be found.

As for the Char Siu, it fared much better. The distinguishable gleam of honey glaze was as tantalising to look at as it was to eat, and it was quite apparent which one I favoured more by the amount of Roast Pork I failed to touch. Fans of uncommon steak cuts will truly relish in the 2GR Wagyu Oyster Blade (S$70 for 250g, S$135 for 500g), with grilled green onion vinaigrette. The steak was done medium-rare and sliced into bite-sized pieces for easy dipping. The chew on each morsel was gratifying.

It almost didn’t need the grilled green onion vinaigrette; it was delicious simply on its own. More meat, anyone? The Wagyu Truffle Don (S$34) is almost textbook, in that it’s become pretty commonplace as a speciality don in places that serve them. The rendition here is piled on with an abundance of truffle flakes, so you know you’re getting the real thing. 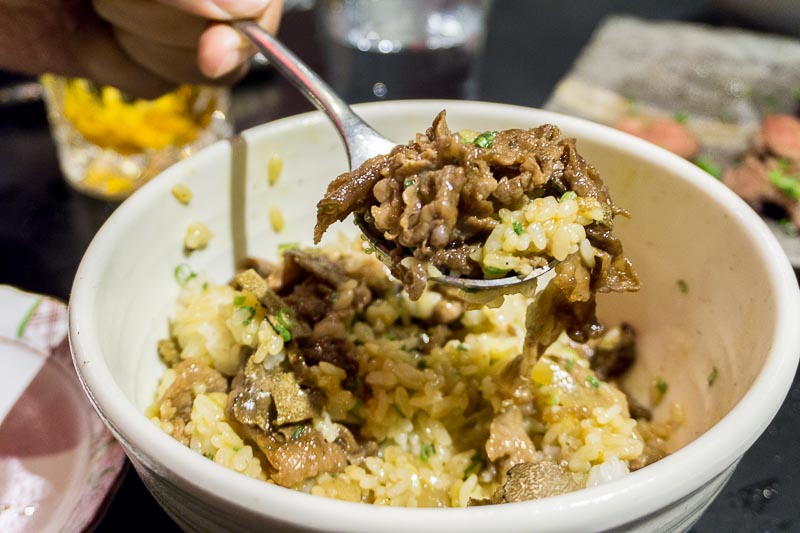 Break the yolk, and stir all the components in together to get get a hearty bowl that’s well worth dropping a few extra dollars on. The beef was tender and the fragrant truffle made the dish an opulent choice.

Perhaps if you’re in the area, wanting to treat yourself to a fancy one-bowl meal, this would be an ideal option. Another talking point of IZY FOOK is their Superior Prawn Mee Pok (S$19). It’s already received plenty of praises with copious amounts of minced pork and lap cheong (Chinese sausage). I was already struggling to eat another bite of food by this point, but I mustered sufficient willpower to get in a few spoonfuls of this. The egg noodles were aptly springy and had a firm bite, while the savouriness of the pork and lap cheong surely lent some depth and heartiness to this comforting bowl.

My only wish was that I was still hungry enough to finish it all, but sadly, I’d reached my satiety limit and could only manage a few bites. The Houjicha Catalana (S$10) is a peculiar dessert. On the menu, it’s described as an ice cream, when in reality it’s closer in texture to a crème brûlée (complete with a burnt sugar top). Nonetheless, it was the perfect way to end the meal as it wasn’t too cloying or decadent.

The portion was just right, and it rounded off the meal on a suitably sweet note.

My lasting impression of IZY FOOK isn’t a great one; it feels like it needs more refinement in its dishes if it were to win over new diners and have them stick around as regulars. Although, perhaps, it could be my taste preference that the menu doesn’t strike joy in me, but I still believe there’s much room for improvement.

Try it if you still insist; we Singaporeans absolutely love to be the first to try out new food places and give our enthusiastic feedback, don’t we?