When you’re passionate about something, you tend to think about it all the time. Today I’d like to share with you some of the thought processes that went into the new Kuro ‘Getsuga’ knife I’ve developed specifically for the home chef who wants to do more. 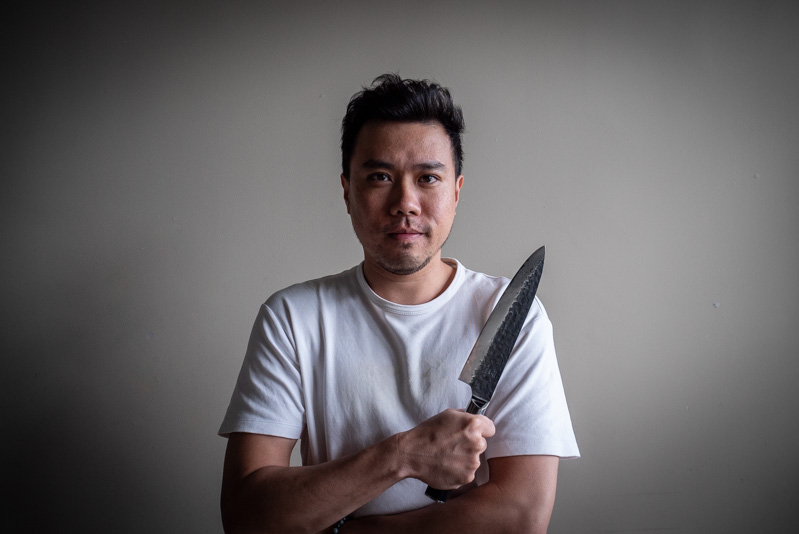 As you know, food is a big thing in my life – it is practically my life. While I often talk about places to eat, one of the undeniably best places to eat in the world is right at home. Being a home chef, this was a huge inspiration for me to create a knife that not just celebrates the culinary arts but also has a place in each home’s kitchen. 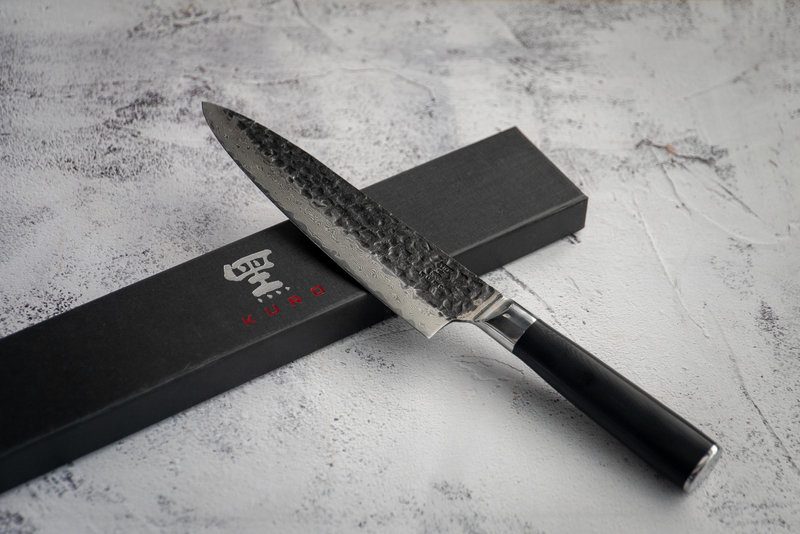 I’m a simple fuss-free chef, and I thought about how I just wanted one excellent knife in my kitchen, rather than a plethora of utensils. My kitchen is rather limited in space too and having the least number of tools while being able to cook gourmet meals was a priority, However, I didn’t want to fork out five hundred dollars for a Japanese knife neither did I want a 10 dollar knife from the supermarket. This is where the gap in the market was. 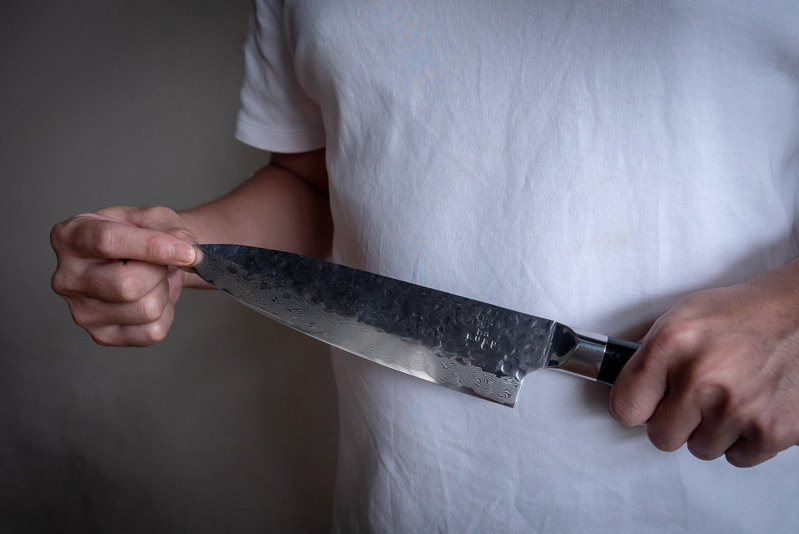 I chose to create a Japanese Gyuto knife for its versatility, using AUS-10 steel core from Japan that is known for its durability, sharpness retention and ease to whet. This made sure that all Kuro knives could constantly stay sharp for precision cuts. Definitely, there were better steel options but that also meant that the pricing would be higher; I wanted an affordable chef knife anyone can access.

The knife is designed to be at a shorter 8″ (about 20.3cm) length as compared to the usual Gyutos, as this length is more versatile and can fit every home kitchen’s chopping board while being easy to wield. I didn’t want a boring knife, and so I’ve also put a lot of thought into the blade’s design. The blade features a heat-treated, hammered finish to its spine, and has been folded 62 times for the Damascus wave at its edge. The hammered design provided some grip for more tedious chops in addition to looking very stylish in the kitchen – a signature knife look I’ve tried to create with Kuro.

Attached to the blade is a black G10 round handle, made of layers of glass cloth and epoxy resin. I found that this material improved the balance of the knife while providing a comfortable weighted hold. Compared to traditional wood handles which felt off-balanced and lightweight, the handle has been carefully weighted to match the blade for equilibrium. Also, G10 is waterproof so there’s no worry about your knife’s wood handle decaying.

As a result, the Kuro knife is a bit heavier than usual and suits those who prefer a sturdier blade. 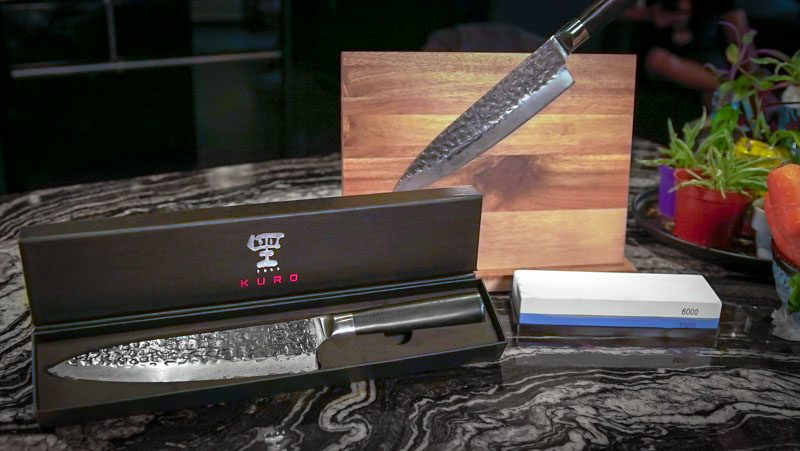 In addition to the knife, I have also prepared combi whetstones of 1000 / 6000 grit and a magnetic board stand for the perfect pairing of elegance and functionality. 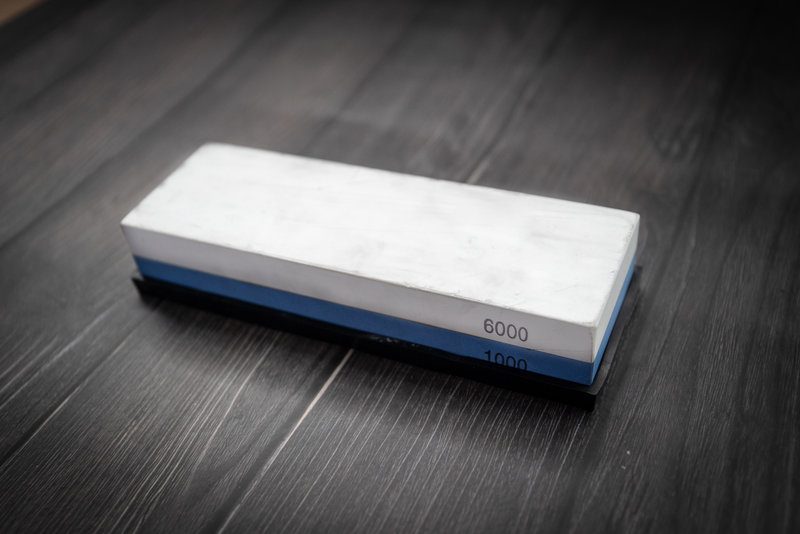 The 1000 grit side is great for getting your knife to a sharpness, while the 6000 grit will finish off your knife with a razor edge. I picked these two combinations for the whetstone as it is a perfect balance, again to cut down on having too many other tools. 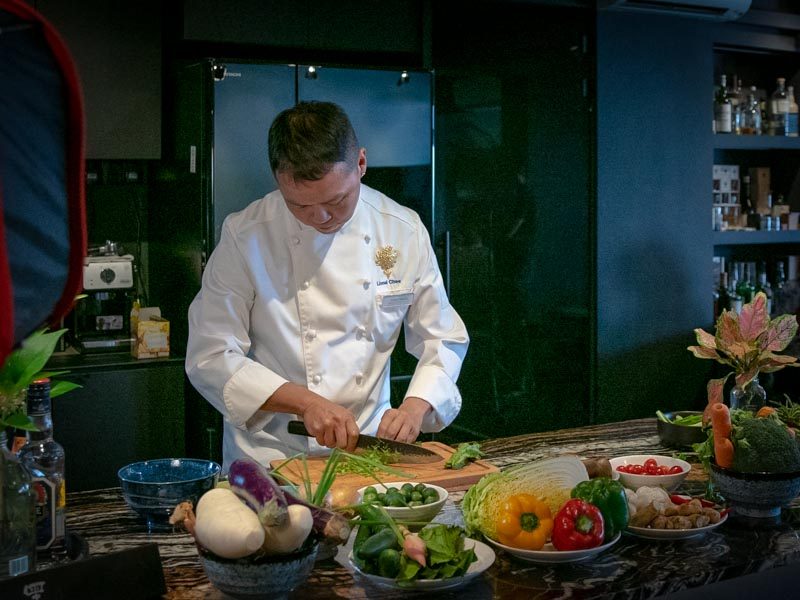 It’s important to put this knife to the test and I’ve let multiple professional chefs use the Kuro knife with great results too.

“This 8 inch knife is weighted and is efficient in cutting big things like whole chicken. The blade of the knife is thick and sturdy which also enable one to cut food in fine thin slices. The length of the handle is just nice and it’s comfortable to hold. Aesthetically it looks beautiful as they weld the knife with a nice wavy pattern. Definitely a knife to use and to gift!” 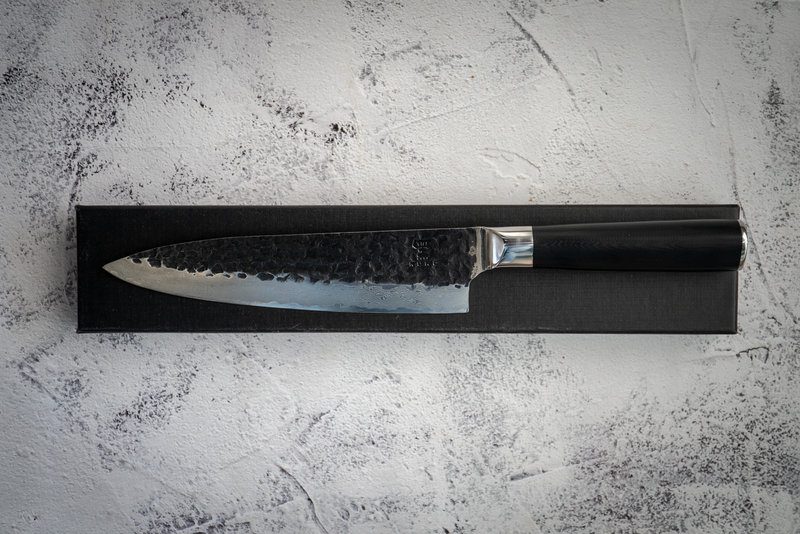 This particular first knife model is called the Getsuga 月牙, which roughly translates from Japanese as ‘Moon Fang’. It’s named as such due to the knife’s blade spine resembling the surface of the moon.

I’ve produced a very small batch of 150 knives that will be released for sale on kurokitchen.com.