One of my biggest woes about finding good food is that most of them are too far away for me to constantly visit them even though I want to.

It’s honestly such a hassle for a North-Easter like myself to travel such a great distance just to enjoy good food. 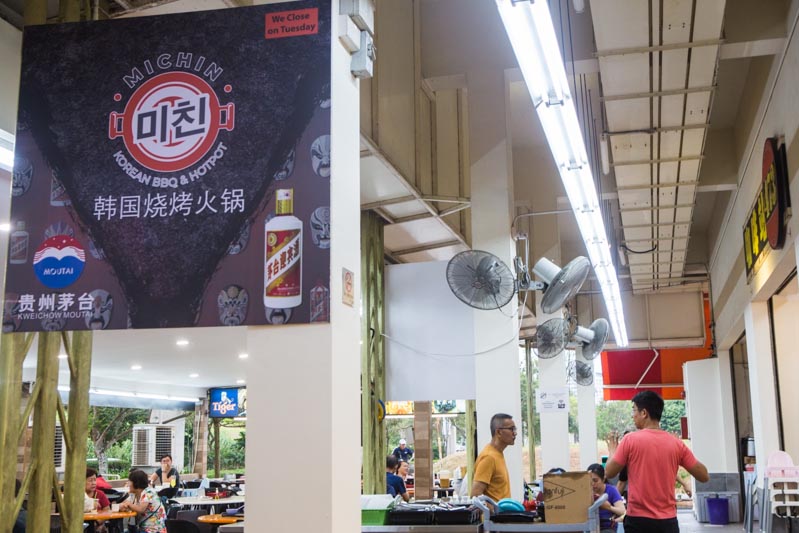 However, Michin Korean BBQ & Hotpot might just take me out of my misery.

Located in the outskirts of Sengkang, 473 Coffee Stop is actually home to this restaurant-grade stall. As soon as we arrived at the coffeeshop, we could see the big stall sign with a counter near it. 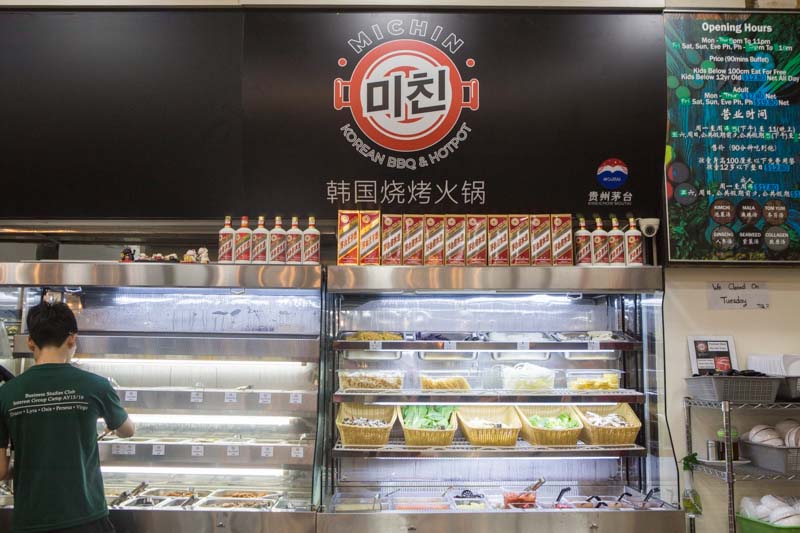 It’s not hard to miss the brightly-lit large self-service display resting at the back of the coffeeshop. After letting the staff know the number of people dining, they led us to our table. We had to choose a soup base before heading to the display to take whatever we wanted.

Since it’s a timed buffet, as soon as our soup arrived at our table, the clock started to tick. The buffet dining duration has a maximum limit of 90 minutes, so we had to make sure to eat to our hearts’ content. 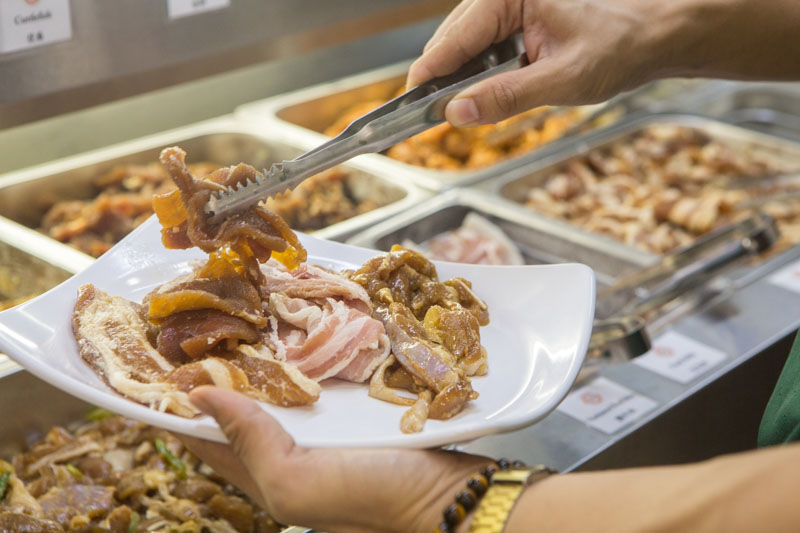 There was a wide range of marinated meats such as Black Pepper Chicken, Shoyu Pork Belly, Garlic Beef Slice, and Garlic Pork Collar to name a few. Unfortunately, on the day that we were there, they didn’t have the Spanish Iberico Pork Shabu Shabu, so we only photographed and tasted the Australian Wagyu Shabu Shabu Slice. 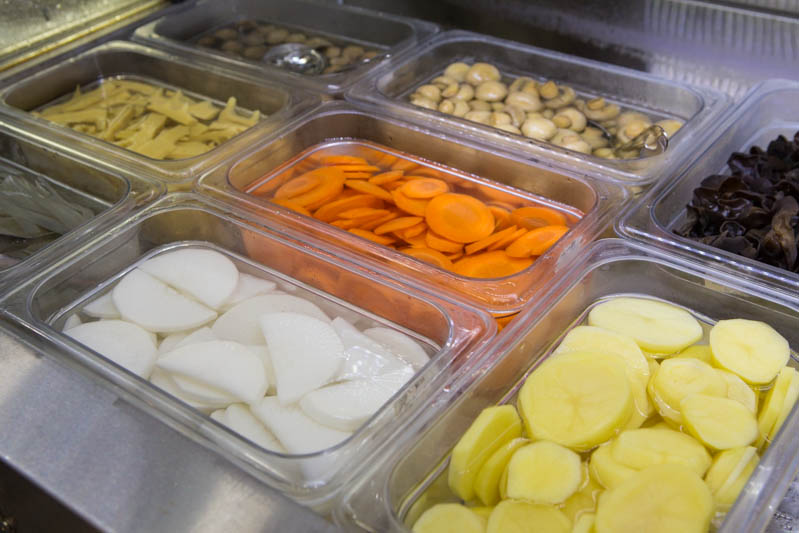 They also have over 30 vegetables and sides which you can choose from for the hotpot. Although it’s a buffet-style meal and we could take as much as we want, we only took what we could finish because food wastage incurs extra charges. They have a total of six soup bases to pick from—Kimchi, Mala, Tom Yum, Ginseng, Seaweed and Collagen. An additional pot comes at S$5++ so if you want to try more than one soup base, it’s best to come in a larger group.

Don’t worry if the soup runs low as all soup bases are refillable throughout the meal.

We decided to go with their signature Ginseng Soup for our hotpot, which is a hot favourite amongst the customers. The extraction of the ginseng flavour is usually a long and tedious process. However, Michin Korean BBQ & Hotpot sous vide the ginseng in rice wine at exactly 63ºC for 10 hours, so that it’s not so bitter as well as to shorten the process. 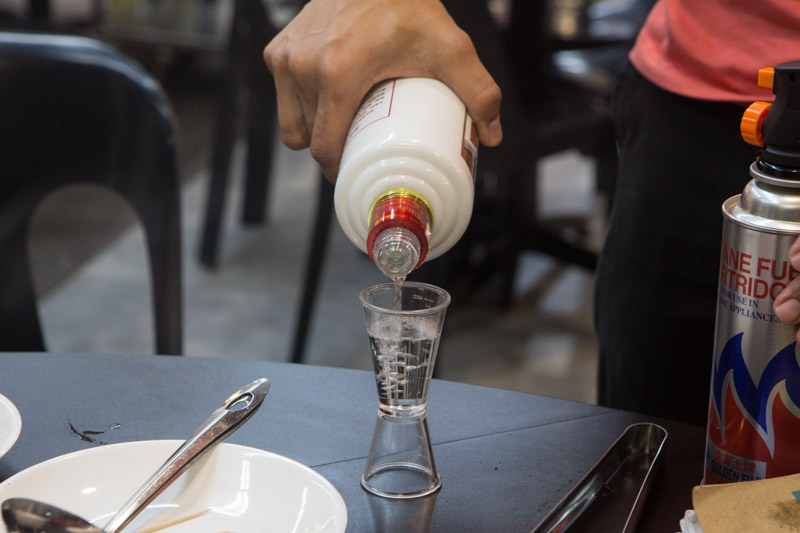 We added a shot of Maotai (S$4) to kickstart the showstopping experience. As the soup started to boil, Benson, the founder of Michin Korean BBQ & Hotpot, prepared the Maotai shot and a blowtorch. 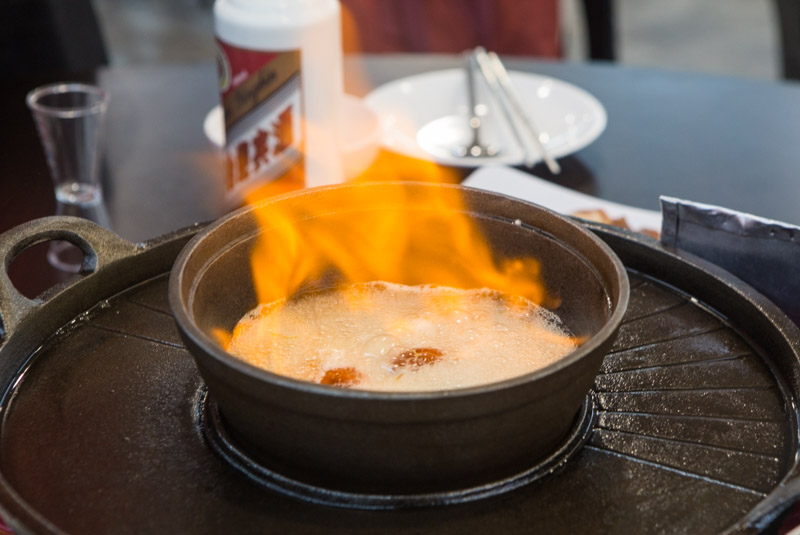 It didn’t take long for the soup to be boiled and as soon as it did, they added in the shot of Maotai and immediately flambéed it. The Maotai shot certainly enhanced the flavour of the ginseng! 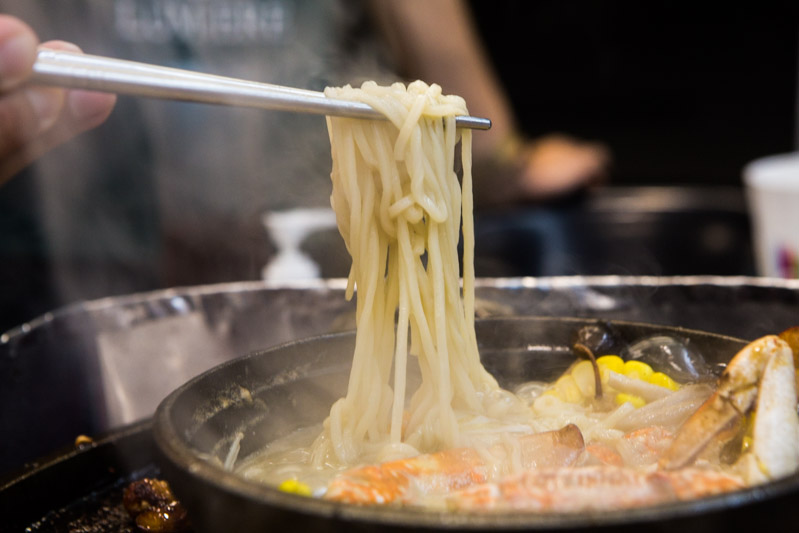 It only took a couple of seconds for the fire to die down and once it did, we threw in the ingredients that we took from the self-service display.

Sadly, we made the mistake of leaving our noodles in the pot for too long and it became soggy. On the bright side though, it soaked up the ginseng essence from the Ginseng Soup, adding a herbal hint to the noodles.

Meat lovers, you’ll like the next part. After tasting the hotpot, we moved on to our favourite part of the meal—the barbecuing. 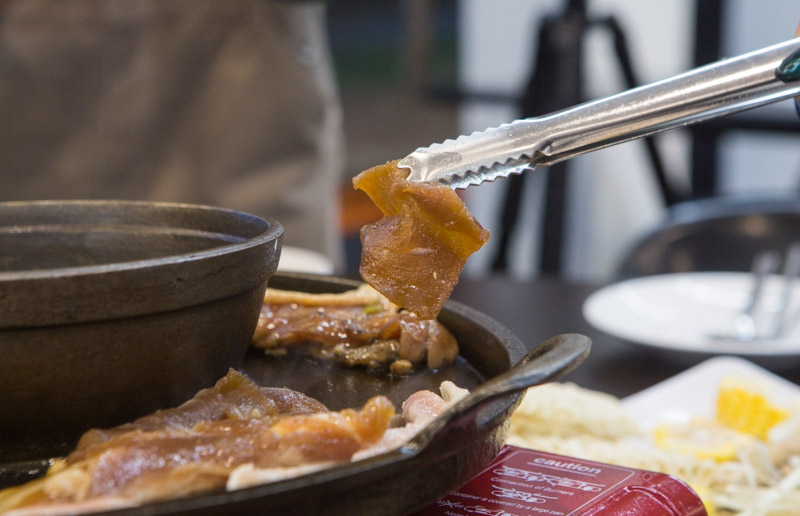 After oiling the pan with the palm oil that’s provided at every table, we started grilling the marinated meats.

The founder, Benson, briefly mentioned to us that he modified the marinade to suit local tastebuds. Marinated meats at most Korean barbecue restaurants are mostly bulgogi-flavoured which has a more saccharine taste. The main ingredients to make a good bulgogi sauce is brown sugar and Asian pears or red apples, so usually it’s sweeter. 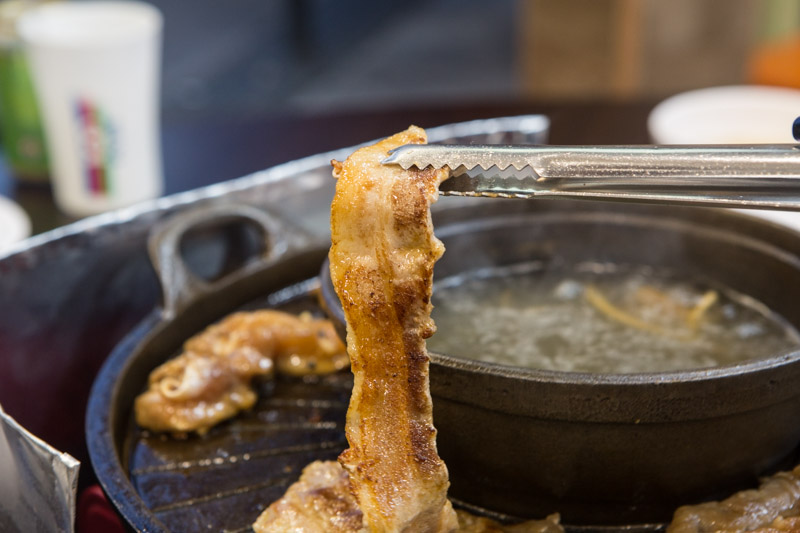 However, the meats marinated by Michin Korean BBQ & Hotpot are mainly doused in garlic, shoyu, or a black pepper marinade. Laying the meats on the grill, we browned the meats until we obtained a nice char. The smoky smell coupled with the peppery marinade made a meat lover like myself even hungrier than I already was. When we were done with the meats, it was time to move on to the wide selection of their fresh seafood that includes some Lobster Balls, Baby Clams, Black Mussels, and Squid Tubes among others.

The more premium ingredients such as Baby Lobsters and Flower Crab will be available on Fridays to Sundays, the eve of public holidays, as well as on public holidays.

So even though you’re paying slightly more for the ‘peak’ days, you’re receiving better quality ingredients so be rest assured that they will not shortchange you. 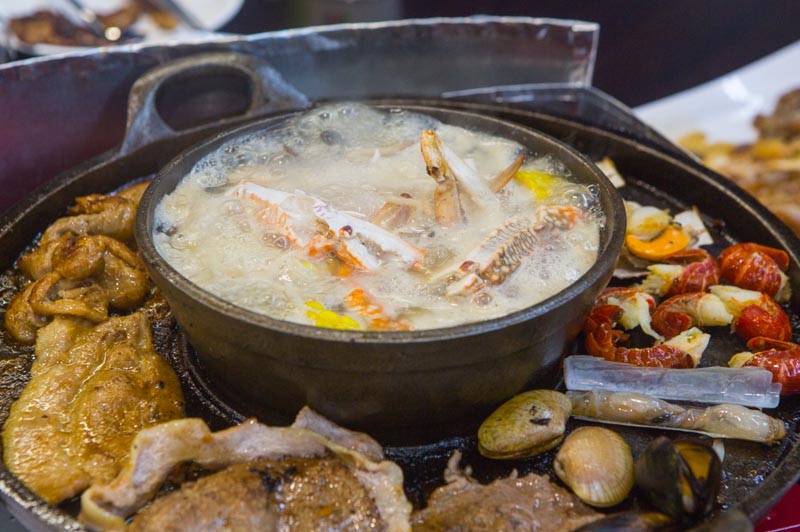 There were two ways we could cook the seafood: one is to simply throw it into the soup, and another is to cook it on the grill.

Cooking the seafood in the soup is faster and lets it soak up the ginseng flavour from the soup. On the other hand, cooking it on the grill infuses the seafood with more depth of flavour. 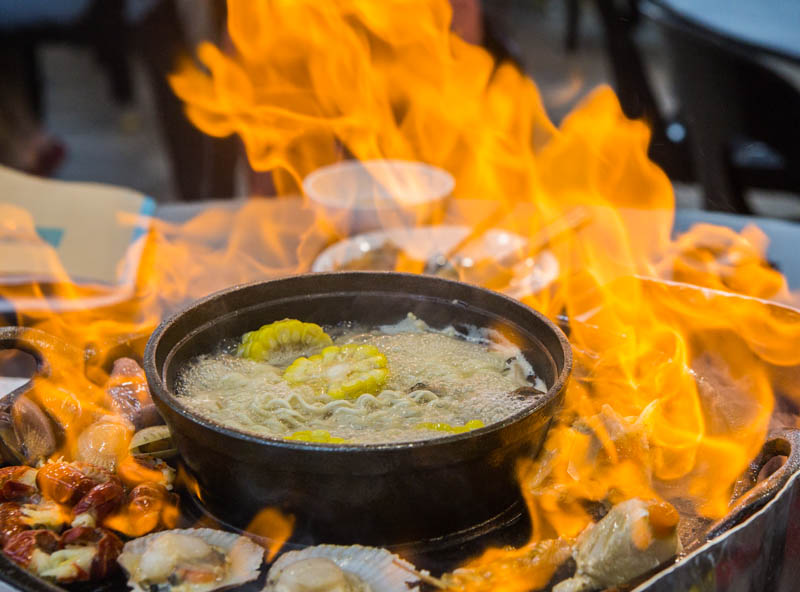 After we’ve put whatever we wanted onto our grill, we added a Maotai (S$4) shot to flambé our selection again. This will let both the seafood and the meats develop a more robust flavour from the liquor. Each bite had a hint of the alcohol from the Maotai shot without overpowering the original taste of the meat.

Personally, I preferred the meats to the seafood as I prefer heavier, more savoury dishes. However, some of my friends were more inclined towards the seafood as they felt that it was able to retain the flavours from the Ginseng Soup better.

Either way, this will be a dining experience that both meat and seafood lovers can indulge in together. If you have more than eight people in your group, you’ll get to enjoy two hotpots and choose two different soup bases. However, if you’re there with less than eight people, you’ll only have the option of one soup base.

Since it’s in the neighbourhood, it means you can pop down for dinner to satisfy your cravings anytime. It’s also a good alternative to relax with your friends while having a good conversation over good food.

Overall, this is a very casual eatery where you don’t have to go through the hassle of booking in advance or dress up too much for. I appreciated the self-service concept because it leaves out the pressure of what orders to give the staff. It also avoids wastage especially if you don’t eat certain food off the platter.

Previous article9 Matcha Spots In Singapore That Green Tea Fans Will Love Very “Matcha”
Next articleSip On Premium Wines From S$8.50/Glass At The Fullerton Hotel Singapore You Can Now Make Your Own Ondeh Ondeh Snowskin Mooncakes With...