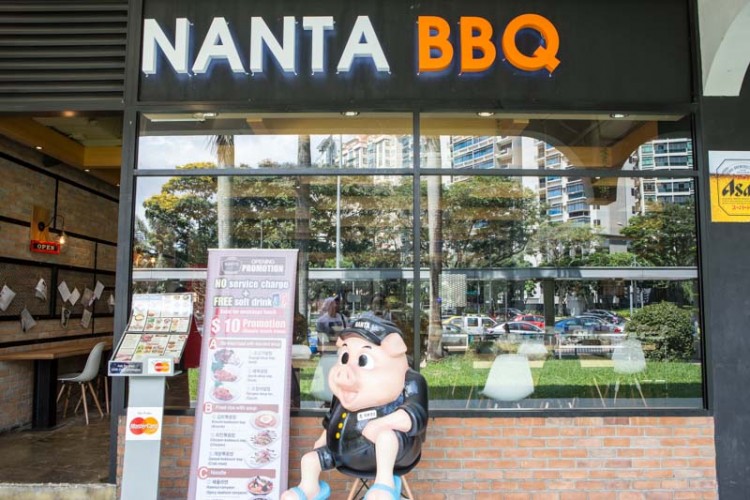 Newly opened grill house Nanta Barbeque (not to be confused with the world-acclaimed musical from South Korea) at the foot of Goldhill Centre joins the trending rise of Korean BBQ outlets in Singapore. Within weeks of its inauguration, we were tasked to sample some of Nanta’s prided stews and barbeque platters. Chic white chalk illustrations of Nanta’s philosophy populate the brick walls of the restaurant that overlooks Velocity through a glass enclosure. Judging from the throng of Korean-heavy lunch patrons one sunny Thursday, it appears either that Nanta’s current $10 lunch opening promotion is irresistibly good, or that its food is simply and heartwarmingly authentic. After a taste of the restaurant’s charming complimentary water that is purified by mineral rocks, we got down to first trying Nanta’s prime offering: 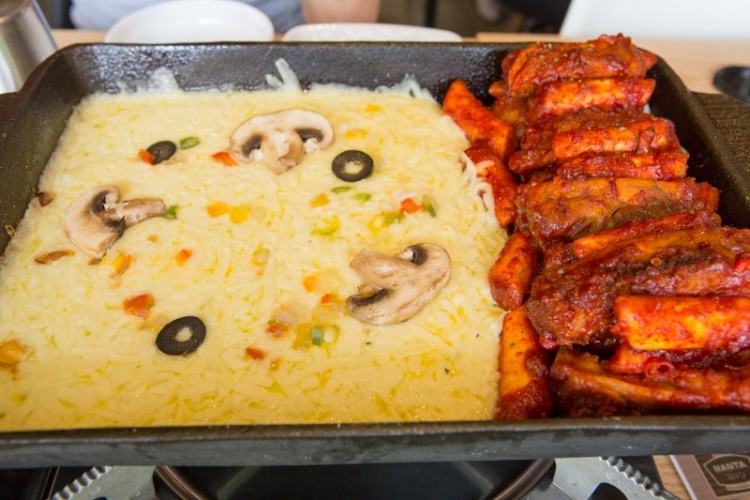 Cheese Deng-galbi ($50++). This cheese and spare pork ribs barbeque package is apparently one of the hottest delicacies in South Korea today. For the consummate tug-of-war-esque experience, we were each given a disposable plastic glove to grab the pork rib and stack cheese rolls over the bubbling mozzarella.

Sad to say, these gloves aren’t in any way heat-proof, but as a promotional incentive, Nanta is willing to bestow a self-serving $200 cash voucher to the person with the longest cheese tug. While terms and conditions weren’t yet revealed, we saw our attendant achieve at least an 80cm cheese extension. The novelty of melted mozzarella cheese and lingeringly spicy pork ribs with rice cakes is hardly this dish’s only selling point, for I thought its wholesome flavour that also steals elements from olives and mushrooms in the mozzarella bed rivaled even the best pizzas I’d ever tried, making it the undisputed champion of the spread of dishes we had for the day. If spice fails to go with your stomach preference, the ribs also come in non-spicy BBQ seasoning.

Due to the heat coming from the bottom of the pan, the cheese separates into a soft melted upper layer which is twirled around the pork ribs and eaten, and a delicious bottom crisp layer that you can scrap off and eat. A scissor would have made it a lot easier to consume the hard cheese layer below though. Galbi-tang ($25++). It takes awhile (perhaps with more gulps of the tasty mineral water) to rid the tongue of that signature Korean spice from the pork ribs. Case in point, this light-bodied beef rib soup with ginseng was found to initially be a little flat, but later grew to exude the flavourful beef essence it was always meant to give. I also liked that the meat was fairly tender and rich in oil. Springy glass noodles are dormant within the herbal soup, but be wary of accidental spillage. 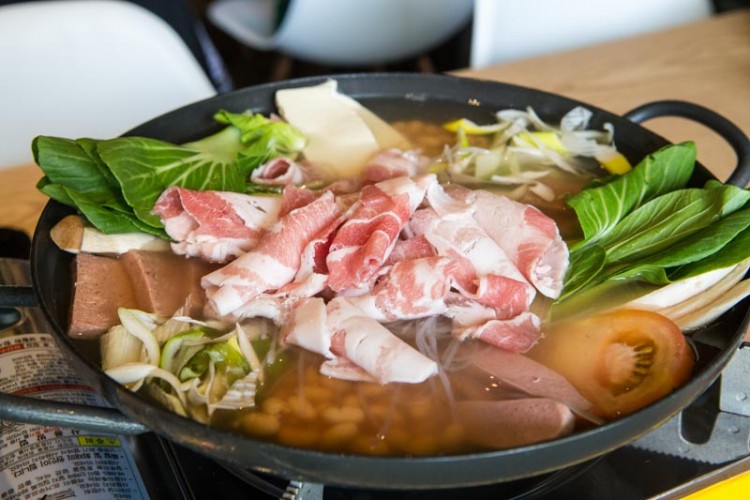 Kimchi-jjigae ($12++). The kimchi stew is true to its name and abounding with the very warming piquancy of the Korean staple. Chewy slices of beef, sausage, spam, mushrooms, and vegetables that are served with the brew also contribute to its cause for an authentic taste. The pot was a bit shallow though, and the soup ran out a bit too fast for my liking. 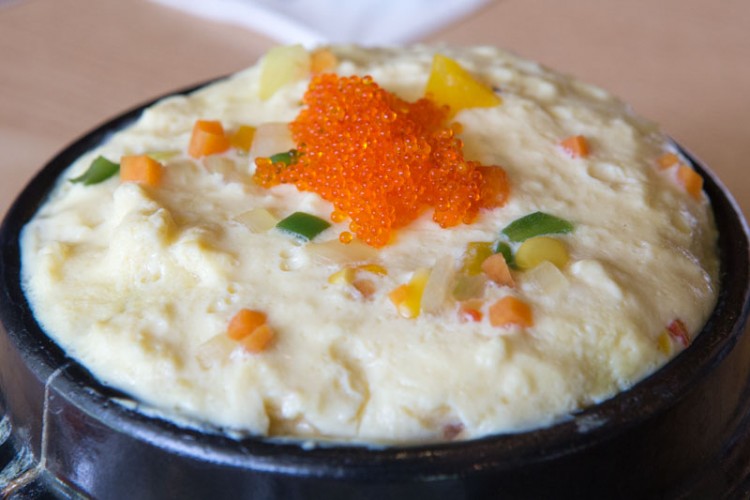 Gyeran-jjim ($6++). A serving of steamed eggs always work for me, but it is essential to eat it hot and get the most of the appetizing froth. In this case, a supplementary dash of tobiko roe is the icing on the cake. I am skeptical of the sweetness brought about by the mixed diced carrots and capsicum that form the base of the steamy concoction, but find comfort in the considerable softness of the gyeran-jjim. Cheese Soonsal Bul-dak ($46++) with Kimchi Fried Rice and Fish Roe ($12++). Our last dish was the other cheesy barbeque item that sees spicy chicken instead of pork ribs that accompany the mozzarella bed. Broccoli, mushrooms, and olives are baked in the same cheese platter. 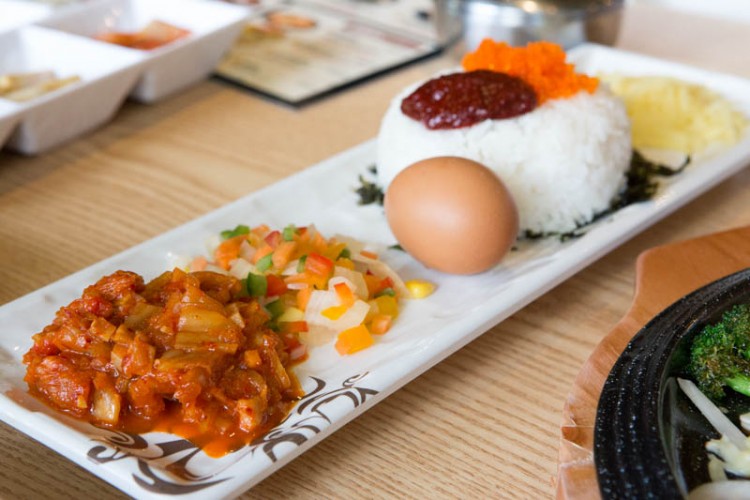 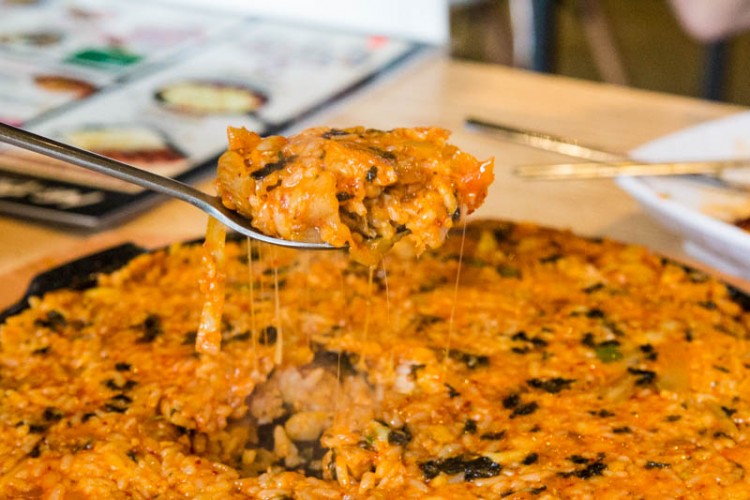 At a $12 upgrade with the kimchi rice, the leftover Cheese Sonsal or Cheese Deng-galbi can be combined with the rice into a barbecued rice dish at your request. So following the chef’s recommendation, we saw our spicy chicken cheese mix undergo an elaborate blend with the assorted rice addition. The result was a scrumptious spicy rice paste laced with melted cheese and raw eggs with a crisp finish. If you desire something unique, this $12 top-up will do you good. Nanta BBQ puts a lot of heart into its cooking, as evidenced by an already steady stream of customers. I expect the restaurant to flourish in the Novena district despite there being several other Korean options. New trendy Korean dishes brought in like the Cheese Deng-galbi are sure to give patrons something to yearn for, which sets this restaurant apart from others.