Nemesis Bar, Duxton Hill: “If the Lasagna could speak, it would’ve charmed the socks off the whole room”

Launched by the folks behind Junior the Pocket Bar, Nemesis Bar—a place well-suited for sophisticated wit and bathroom banter alike—is set to bring a wild streak to the quaint cobblestone streets of Duxton Hill.

As usual, my poor navigational skills led me to walk past the bar twice. So, folks, do note that the only signage they have is one of their name “splattered” on the main door. That aside, the first thing one will be greeted with is how their quaint interior is surrounded by commissioned artworks by Feral Sg, and is definitely something to talk about. I mean, look at it; truly capturing the essence of Nemesis’ wild and playful yet subversive nature.

Starting off with cocktails from the Nolo Aperitivo portion of the menu, the first thing you’ll notice is that the majority of stuff on the menu has a little bit of Spanish influence and is created in a versatile manner where one can have their vegetables and fruits the way nature intended—in cocktails. The Sunset Drip (S$19) tasted like how I would imagine taking a walk down to the beach during the golden hour with the rays of the sun kissing my skin. Gin and sunset lovers, this drink is made for you. The blend of grand bitters, spiced orange, and mint was very complementary to the alcohol of choice; giving it a warm yet fruity taste and it also looks like the sunset.

The Iaso (S$19) is one drink that hits the spot. Named after the Greek goddess of recuperation from illness, the concoction of gentiane, fennel, apple, orange, and honey with gin totally encapsulates the earthy mustiness of root herbs and the sweetness of the fruits making it taste like a refreshing medicinal remedy.

If you’re looking for something stronger, you can never go wrong with having a swing at their House Cocktails (S$23), Martinis (S$25), or the usual beers and wine. On to a little bit of grub after the thirst-quenchers, I had the Olives (S$12). Here’s the twist; it isn’t just an ordinary bowl of olives. What you get is a bowl of beer-battered green olives with a side of goat cheese. The thing about green olives is that it proves to be bitter and salty with some tanginess, so pairing it with goat cheese—a cheese with similar taste profile—only made the dish saltier. Ultimately, I think that’s what they were going for; the dish to be different from the norm with a touch of zestiness. 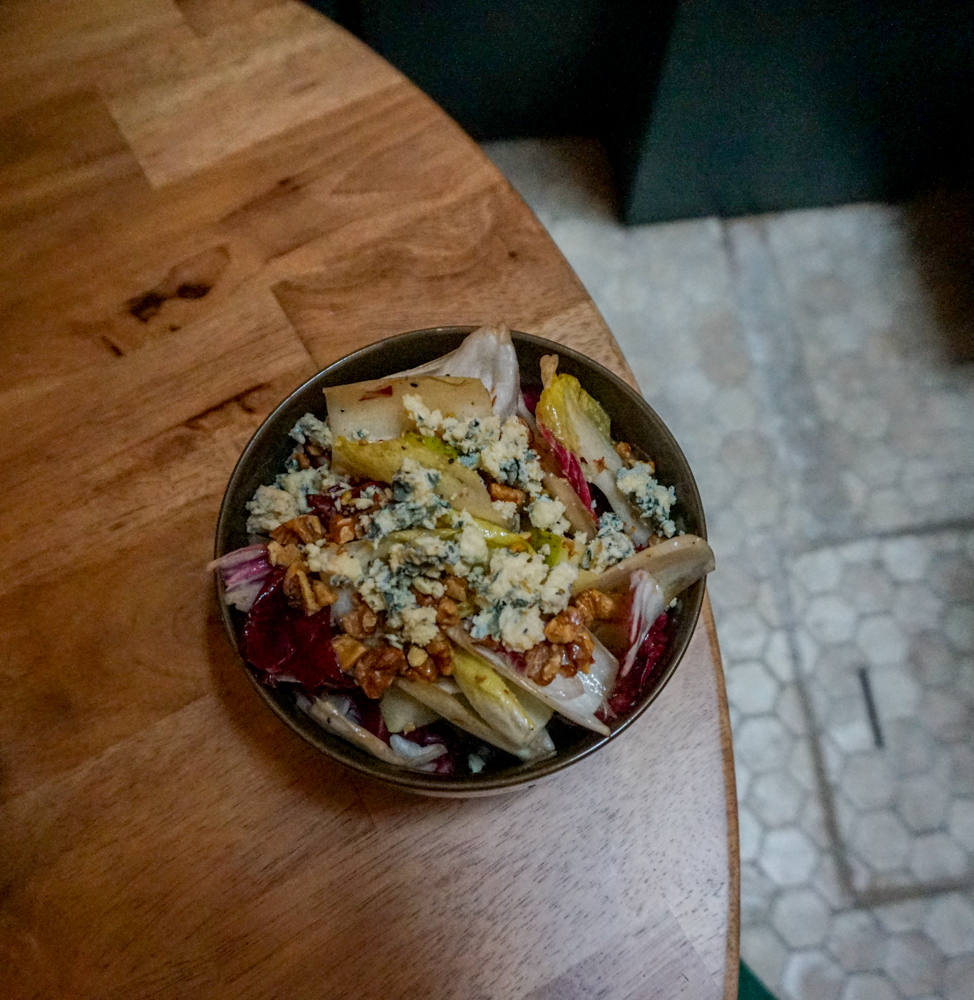 I took one glance at the bowl of salad and went, “Okay, this is interesting”. The Bitter Leaf (S$12) consists of radicchio, endives, and pear slices topped with bits of blue cheese and chopped walnuts. We all know blue cheese can be a temperamental child to work with and true enough its robust flavours ended up overpowering the dish, hiding the bitterness of the two leaves and walnuts, and sweetness from the pear. It was a bit disappointing because the salad bowl had so much potential and was aptly named! Saving the best antipasti for last, the Lasagna (S$14) stole the night. I mean, quite literally, if it could speak, it would’ve charmed the socks off the whole room. The dish consists of house-made bolognese sauce layered between sheets of lasagna which is then crumbed and fried. You’ve got to give them credit for this one. The outer shell was crumbed to perfection and crunchy while the lasagna maintained its moistness. Never have I tried anything like this before and now, I wish all lasagnas came fried. The pizzas in Nemesis come in two choices: red or white—the red has a traditional tomato base while the white has a béchamel base. While you can’t go wrong with a classic Pepperoni Pizza (S$18), the Potato Pizza (S$18) was the one that stood out. I know what you’re thinking, “Carbs on carbs—does that even work?”. Yes, it shockingly does. The pizza is actually creamy potato salad baked with smooth béchamel atop a hand-kneaded sourdough base and finished with a brown butter crust. The additional topping of the onions and touch of vinegar gave the pizza an added zing.

But what started out as a winning dish slowly depleted as the pizza was indeed a little bit on the soggy side and I was unable to get a taste of the brown butter crust as the slice I had was burnt. If you are looking for a place that is out of the box with their crazy and wacky creations, Nemesis bar is the right place for you. While retaining their elusive appeal, they have managed to introduce me to a couple of creations I never thought would actually work or exist until I’ve had a go at it.

A quick chat with Tim, the head bartender, also revealed that Nemesis bar is here to remind folks of the element of fun and creativity in bars; which they managed to do. As the folks at Nemesis would say, “Check your egos at the door, open your minds, and say ‘Aah’”.

Previous articleNew in town: Singapore Chocolate, Sentosa — “Head on over for a little bit of Vitamin C(hocolate)”
Next articleDing Tele, Kovan: “Singapore’s Sheng Jian Bao experts have lost their lustre”