Innards, offal, various odd cuts or whatever you may know them as were once eaten for practicality’s sake, and less so for gastronomical reasons. However, with rockstar chefs preaching the gospel of nose-to-tail dining, cuts and innards are now exotic.

Not everyone is quite as keen to get into (no pun intended) eating offal, and these dishes still find themselves with more of a cult-like following. Steeped in culture and history, these dishes deserve more attention than galaxy cakes and raclette over everything.

Before the glut of “good” food we have today, taking undesirable nitty-gritty bits and turning them into dishes that are not only palatable but delicious was the norm. Here, we’ve compiled a short list of dishes and sides of innards and offal, along with the stalls and restaurants that are some our personal favourites. 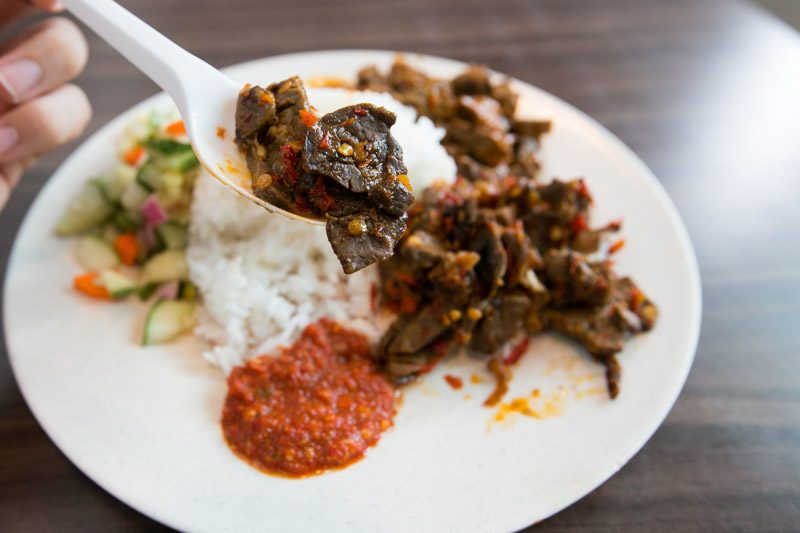 Paru goreng balado is quite simply one of my favourite dishes when patronising nasi padang stalls. Chopped up beef lung fried in sambal balado, which is a mixture of fragrant kaffir lime leaves, lemongrass and of course chilli and other ingredients. 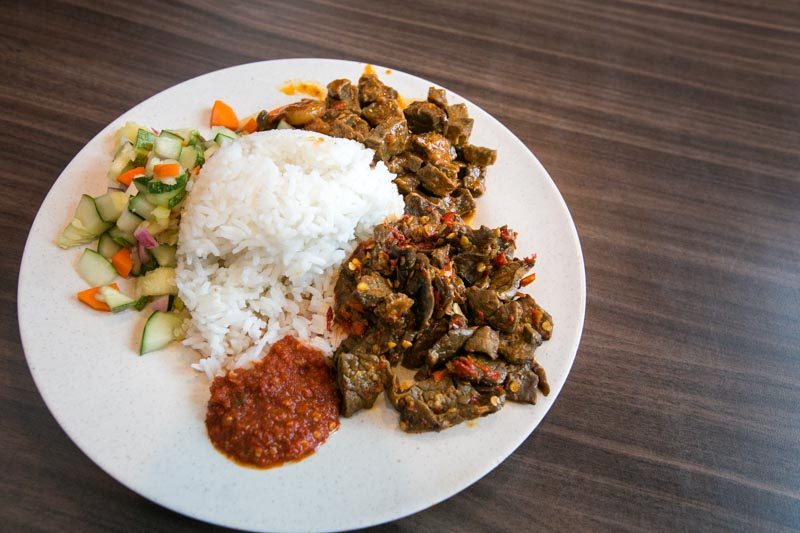 Paru can be fried till crisp on the outside and slightly chewy on the inside or, just tender through and through. Beef lung is more textural than anything, without any sort of pungent flavour on its own, so the flavour of the sambal balado is more often than not the highlight of the dish. 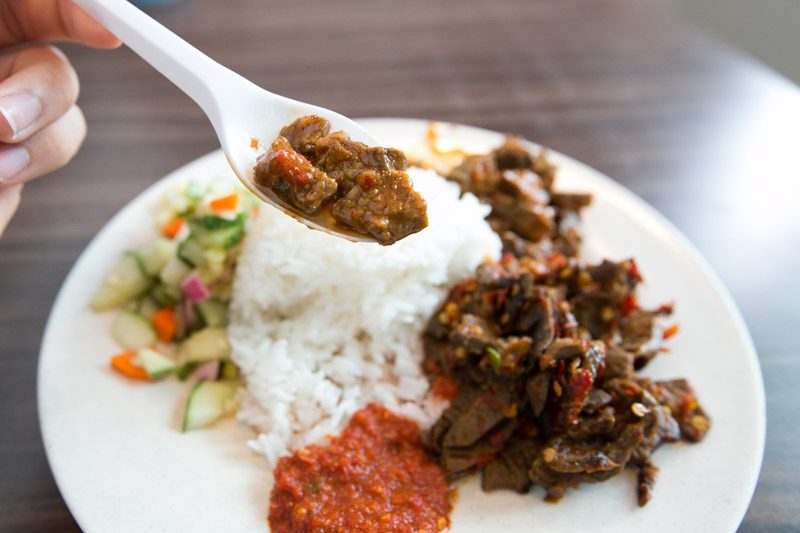 Keeping with the Malay culture, sambal goreng pengantin is a dish typically seen during festive celebrations and weddings. Cubes of beef liver and lung make up the bulk of the dish. But once again, the magic is in the rempah (spice paste). 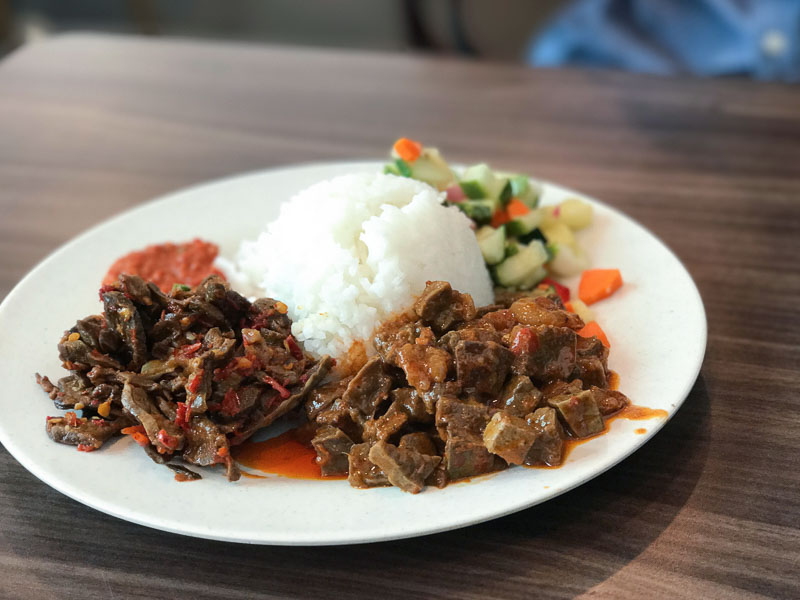 A blend of lemongrass, galangal, chilli, coconut milk amongst other aromatic ingredients that come together in a silky creamy paste that marries (pun intended) the whole dish together. Every cube of lung and liver is still distinguishable, the liver tender and more earthy in flavour compared to lung which is slightly chewier.

With prawns, beancurd, tempeh (fermented soybean cake) and long beans as part of the dish, it remains a shining beacon for cooking with innards as the dish remains a mainstay at big occasions. Though I wish it’d show up regularly at more nasi padang stalls. 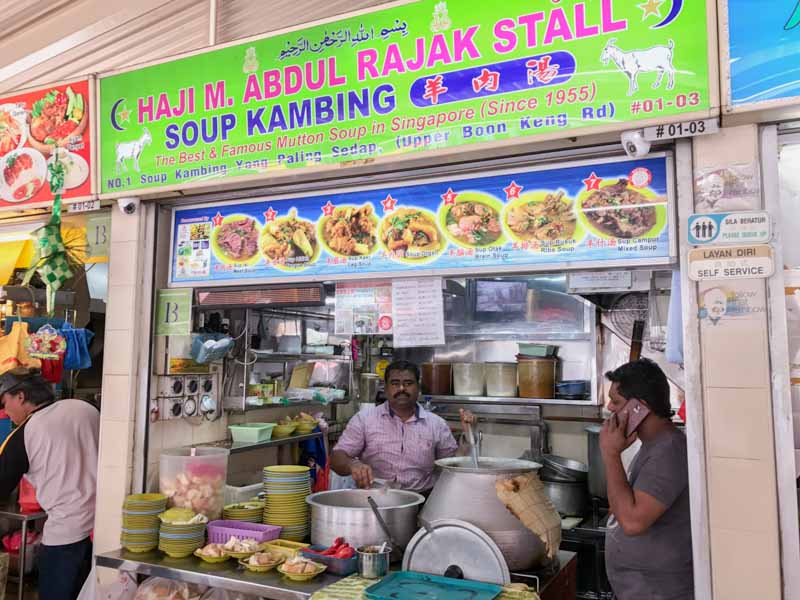 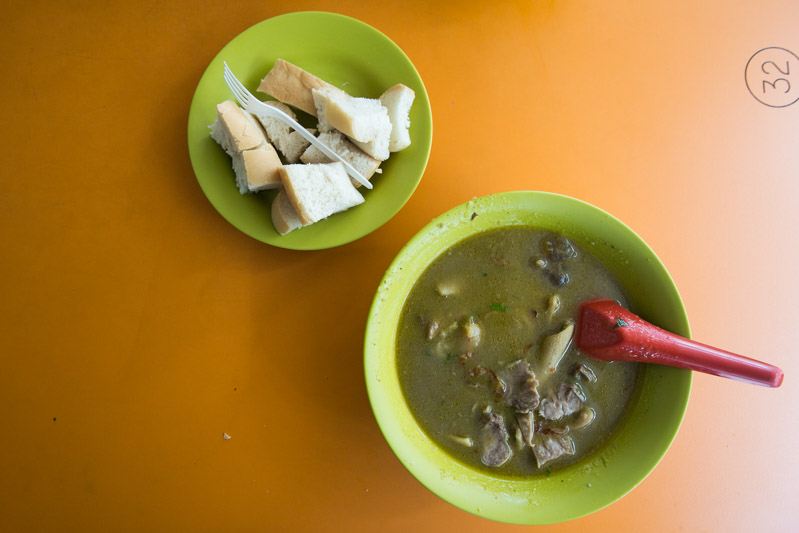 Soup kambing, or mutton soup is a salty and rustic bowl of soul comforting goodness. Piping hot and with a greenish tinge, because of the corriander, it’s often served with a side of white bread to ensure every drop of goodness goes down the hatch.

But every Singaporean has heard of soup kambing, however, what if I told you organ soup kambing ($8) exists? One touted by older folks to be excellent for the libido. Cue the scrunched up faces, and groans of repulsion. 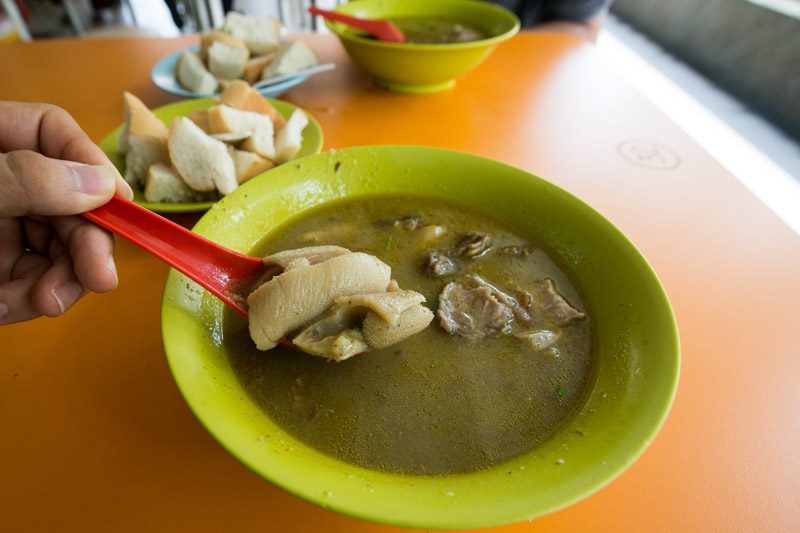 Cooked in the same broth, behold the version chock full with an assortment of goat innards. More often than not, the most common goodies you’ll scoop up are the pieces of tripe (stomach lining), which isn’t anything more than textural.

Coming across pieces of an unidentifiable organ, which could have been a goat’s penis had I decided to scoop out every piece and arrange it, the sensible thing was to ask the owner of the stall what it was. However, his answer “It’s just an organ” left me a little disappointed if I were to be a critical ass. While the mystery organ definitely has the distinct gamey flavour, so does mutton in its entirety.

I fully expect readers to recoil in horror at the thought of eating goat brain, or any other brain for that matter. The sight of brain can be quite unsettling. Fortunately I’ve kept the squeamish in mind, choosing to feature a dish that masks the identity of the offal extremely well — curried goat brain ($3).

Chopped up and cooked with a plethora of spices and egg, this Indian dish won’t send anyone running in terror. However, like so many other varieties of offal there isn’t a distinct taste to brain.  It’s best described as very light cream, with texture like the silkiest tofu you’ll ever have.

Perhaps the internet and more palates will be open to sliced pig brain fried in a cast-iron skillet someday. But, for now the spiced variety at Azmi Restaurant shall do.

Pig organ soup ($3.50-$4) is hardly unique to Singapore. Throughout the rest of South-East Asia, other countries serve up their own renditions of this organ medley. In many of these other versions, cubes of blood cake are added to the broth, giving it a stronger, earthier flavour. Some variations even add blood itself into the broth.

However, with the ban on blood cakes in Singapore over health concerns, what we have is a much cleaner tasting soup. With preserved mustard greens an integral part of our local variation, the pickled flavour makes the soup lighter on the palate.

Pig organ soup is fairly common, however, Koh Brother Pig’s Organ Soup makes an intestine casing stuffed with glutinous rice and chestnuts ($2). A side dish that isn’t commonly found at other purveyors of pig organ soup. Kway chap ($5/pax) is pig intestine slow braised in soy sauce, with pork belly, egg and preserved vegetables. Accompanied by what seem like extra large slices of kway teow (flat rice noodles), this dish of innards is a dish best enjoyed with a group.

Well prepared intestine shouldn’t remind you of the purpose it served before ending up in your mouth. Allowing you to enjoy tender pieces of intestine that soak up the robust flavour of the sauce they spent hours simmering in. 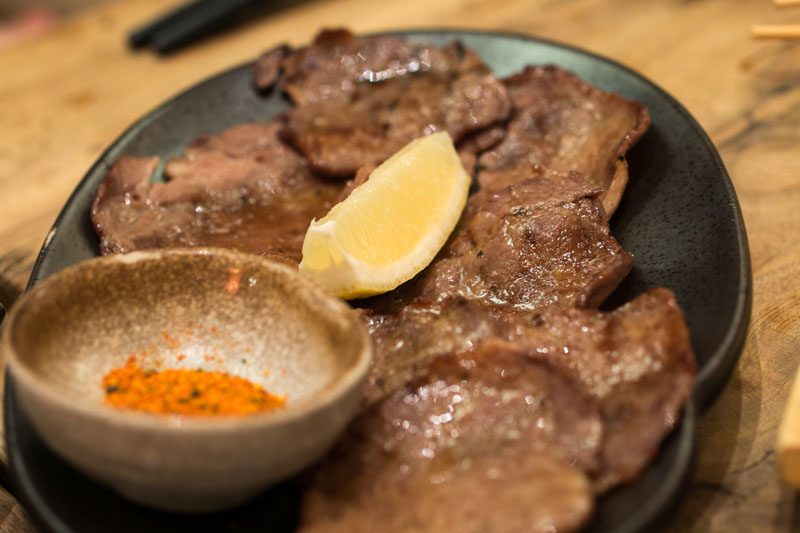 The mere sight of offal has the ability to make most go weak in the knees for all the wrong reasons. Rarely the most appealing looking of ingredients, at the hands and imagination of the right people, cheap cuts like beef tongue ($14) can become dishes worthy of excessive salivating.

Grey, and probably in contention for grizzly looking dishes. Chicken gizzard ($1) is a (side) dish best served cold. The snap and chew of the chunks of gizzard break the monotony of eating chicken rice. Not that there’s anything wrong with a solid plate of chicken rice but, live a little and mix it up.

Eat your heart out when eating chicken heart ($4.30) — they’re often found skewered at Brazilian churrasco (barbecue) style and Japanese izakaya and yakitori joints. Being bite-sized, the skewer is the perfect delivery system for this offal to mouths.

Pumping blood till the chicken’s demise, chicken heart is slightly chewy in a pleasant bouncy way while being mildly metallic. Nothing that will have you hacking up your guts.

Trust the Japanese to be leading the way when it comes to eating raw food. Offal sashimi style though? That’s pushing the limits if you ask me. Surprisingly chicken liver sashimi ($15), with ginger, garlic, onion and sesame oil to complement it, you can enjoy the creaminess of the chicken liver, sans the fear of any overbearing offal flavour.

Treated like the carnival freaks of food, often nothing more than a novelty dish, eaten only when dared to. Hopefully this’ll bring them out of the shadowy recesses. If you ask me, food like this is cheaper, tastier and more filling than exorbitantly priced avocado and toast with a side of paper thin parma ham.