The area around Paya Lebar MRT used to be almost barren. Before 2014, there was only the SingPost Centre and City Plaza in the vicinity, which did not offer many food options to people working and living in the area.

Luckily, this problem was soon solved with the opening of ONEKM Mall (now called KINEX), and the completion of Paya Lebar Square. SingPost Centre also underwent a rejuvenation, making the Paya Lebar area a metropolis in the East.

But despite already having malls on every front of the MRT, the area has never ceased to grow. The latest addition, Paya Lebar Quarter Mall (PLQ Mall) opened its doors to the public on 30 August 2019, bringing even more food options to the area.

Armed with cash and an ravenous belly, I made my way down to PLQ Mall, to explore what this new food scene has to offer. Here are 10 food places that you should pay-a visit to at PLQ Mall: Mom’s Touch at PLQ Mall is the very first outlet from this Korean fried chicken brand on our sunny island. As its name suggests, the ideology behind Mom’s Touch is to remind diners of comforting homecooked food. We tried the Incredible Burger Combo Meal (S$9.80), a burger which includes ham, egg, some vegetables, and a big piece of fried chicken thigh. As I bit into it, an audible crunch was heard.

Crispy on the outside but soft and tender on the inside, the chicken thigh was so big that I could barely hold up the burger. 2. East of Eden by The Coffee Cart Located just outside of PLQ Mall is an open-air seating area surrounding a water feature. The therapeutic sound of water and the al fresco seating reminds me of France, and it may just be the right atmosphere you need for a dinner with your friends after a tiring day at work.

While there was a lot of hype for Morphine Coffee, we decided to try East of Eden that was a few shopfronts away. Not only does East of Eden specialise in serving a good cup of joe, but they also offer customers a few selections of gelato flavours. We tried their Passionfruit Sorbet and Hokkaido Milk (S$7/double scoop, add-on S$1/cone) ice cream on a cone, which was just the thing we needed to beat the sweltering heat in Singapore. 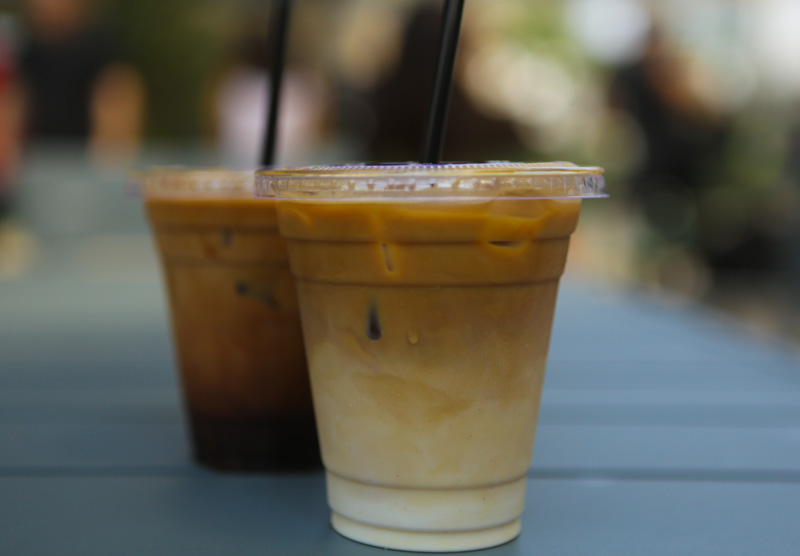 We also had a cup of Cappucino (S$5.50) and Cafe Mocha (S$6). While the coffee may not have a strong hit of caffeine, I was pleasantly surprised that the taste of espresso still shone through and the drink wasn’t overly sweet. Looking for some local fare instead? Head on to Red Ginger at Basement 2 of the mall. Red Ginger offers a variety of Muslim food such as Mee Siam, Mee Rebus and Lontong.

If you would like to indulge in Nasi Padang, the store also offers an assortment of ingredients. The prices of each dish vary based on how many ingredients you choose to add. We decided to try the Mee Siam (S$4.80). Despite the dish looking slightly diluted at first, the assam flavour still hits the right notes of tanginess. However, we unanimously agreed that the crimson-red chilli paste could offer a bit more of a kick—though that could easily be solved by just adding more chilli to the dish. HAYAI is a Japanese kiosk that offers a new concept for on-the-go food places. Think of the place as Subway, but for onigiri (Japanese rice balls) sandwiches. You will have a choice of meat, followed by vegetables and of course, sauce. 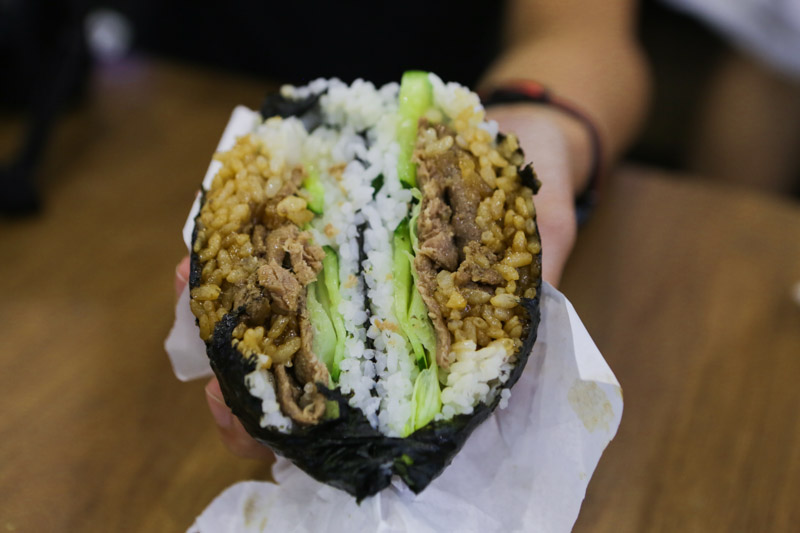 When asked to choose our sauce for our onigiri sandwiches, we chose the Mentaiko Mayonnaise for the Beef Bulgogi and the Teriyaki marinade for the Chicken Katsu.

Unfortunately, choosing the Mentaiko Mayonnaise for the Beef Bulgogi might have been a mistake. As mentaiko is quite salty while bulgogi is a sweeter marinade, the two strong flavours conflicted each other instead of complementing each other. Maybe if we had picked a lighter sauce or even no sauce, the onigiri might have a more balanced taste.

Although I understand that some people may like their food to be packed with a lot of flavours, so to each their own. 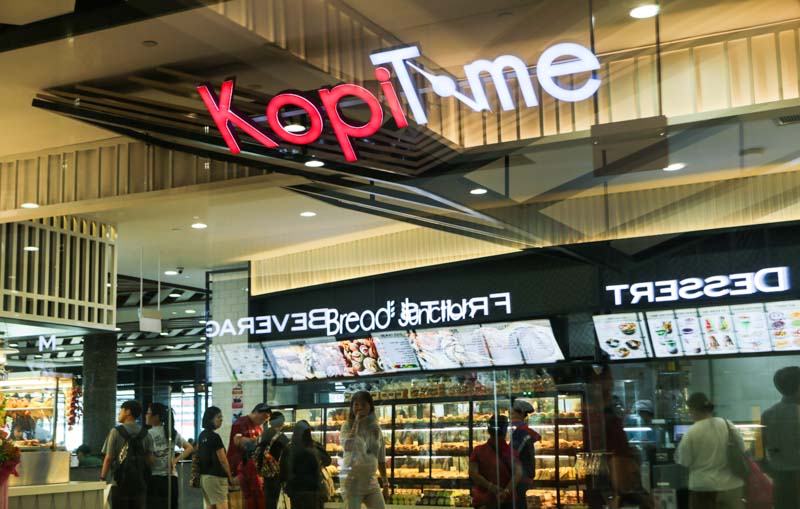 How could we not talk about the food court in a mall? After all, it is the most default place someone would go to if they can’t decide what to eat. Enter KopiTime, a new concept by food court giant Kopitiam. 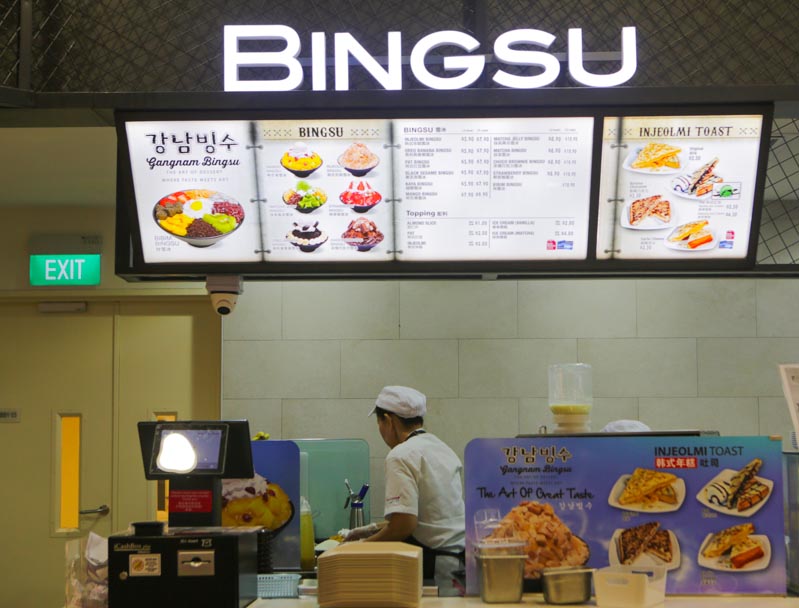 KopiTime has a variety of conventional staples such as chicken rice, and also food you will not commonly find in food courts like a stall that sells bingsu, a widely-known Korean shaved ice dessert. 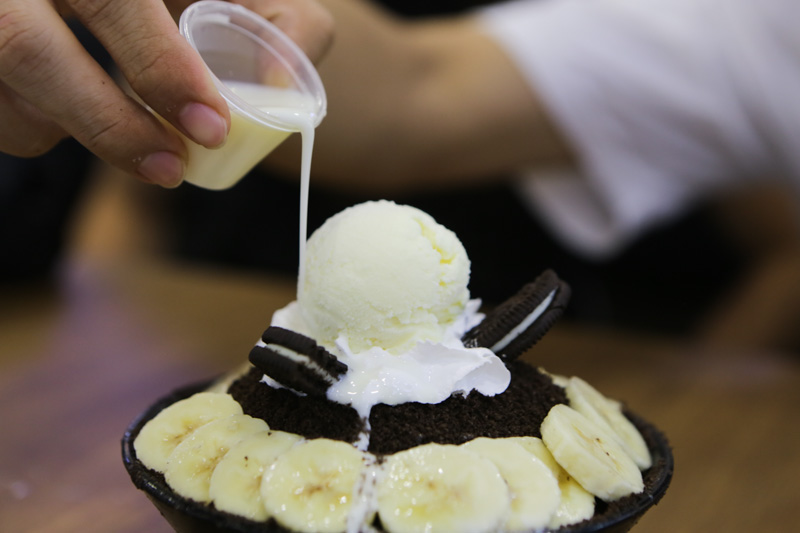 We tried out a bowl of Oreo Banana Bingsu (S$5.90) from Gangnam Bingsu. Even though the shaved ice is already sweetened with some milk, we still drizzled a cup of condensed milk on it before enjoying it.

The milk-infused ice flakes in the dessert truly resembled the ones in Korea. However, I wish that the ice cream that accompanied it could have had more dimension to it as it felt like it was simply a run-of-the-mill vanilla ice cream.

But for its price point, I’ll choose this any day over all the other overpriced bingsu at other Korean dessert cafes. Nevertheless, it was also interesting to see a Korean dessert stall in a local place like a food court.

Another place that has been raved about was Fong Sheng Hao, a cafe that serves Taiwanese toast sets. This shop would make for a good breakfast spot or even an afternoon tea time place. 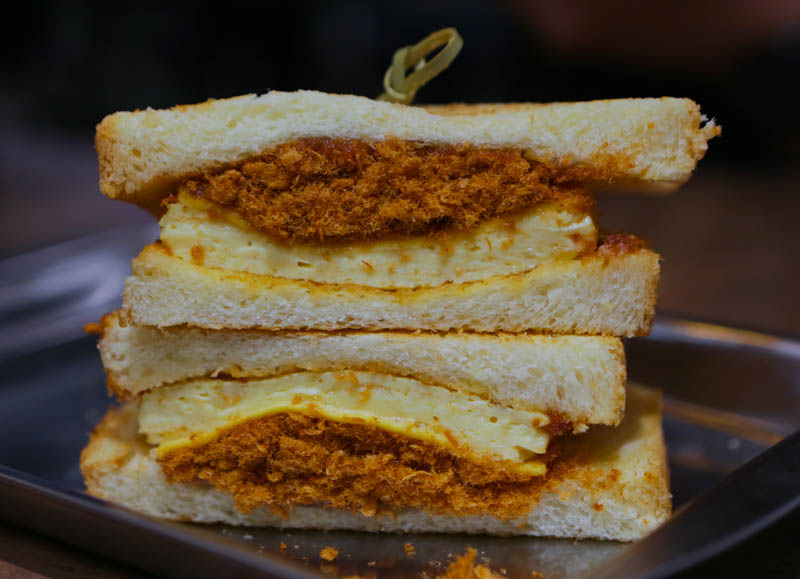 We ordered the Pork Floss, Cheese and Egg Set with Teh-O Ice (S$8.20), and we were given a buzzer to collect our food. What was interesting about this place was the presentation of the food. Instead of plates, the toast was served on a metal tray and each slice of bread was beautifully grilled to a golden brown.

While the bread itself was arguably one of the best slices of bread I have eaten in my life, the toast tasted more like a dessert due to the added condensed milk to the toast. If you prefer something more savoury, you could try the Pork Egg & Cheese (S$6.30) instead. Health junkies, amidst all the sinful food that we have mentioned so far, there are some healthier options for you as well. One such place is smol.

smol is also located near the water feature outside the mall, so you can enjoy the outdoor seating and tranquil atmosphere while tucking into your bowl of superfood. We tried the We’ve Got Beef (S$12.90), a healthier take on stir-fried beef noodles. It consisted of soba noodles, a serving of stir-fried beef, some assorted veggies, a 63ºC onsen egg, furikake (Japanese fried seasoning), and some shredded nori seaweed.

We also ordered the Butter Cheekn (S$9.90), a cruelty-free version of the Indian butter chicken dish as there was no chicken in it at all. Instead, they used eggplant and tofu to substitute the chicken bits. This would serve as a good option for vegetarians.

Located right beside smol, Lucky Bird is an eatery that specialises in the trademark dish of Singapore—chicken rice. A plate of Steamed Soy Chicken Rice (S$7) and a bowl of Lucky Bird Okie Pokie Bowl ($7.90) here may set you back a little, however, you can rest assured that you’ll be getting your money’s worth.

The chickens used in Lucky Bird’s dishes are imported from France, and are grown in a humane environment, so it is no wonder their dishes are slightly pricier than your usual S$3 chicken rice.

Lucky Bird also provides a unique twist on our local favourite by offering a chicken rice Wrap N Roll (S$7.90) — which is essentially chicken rice ingredients in a wrap.

Apart from their sides, they also have an extensive range of mains like their Signature Grilled Chicken Chop (S$13), Pork Chop & Pork Bratwurst (S$16), and Grilled Tender US Beef Short Ribs (S$19). Think of Jack’s Place —- but more pocket-friendly.

Despite its recent opening of PLQ Mall, Morphine Coffee has already seen long queues of people waiting to get their daily caffeine fix.

Apart from their coffee series, Morphine Coffee also offers other novelties such as Iced Lemon Tea with Cucumber & Mint (S$3.50) and Iced Ginger Ale (S$5). The Iced Ginger Ale is brewed in-house and contains cinnamon, so you can expect the piquant spiciness all in one cup!

Alternatively, you can sit down with your date and have a good conversation over a nice cup of Matcha Latte (S$5.50) and Hojicha Latte (S$5).

While it was nice to see that PLQ Mall has many common restaurants such as Hai Di Lao and Paradise Dynasty, it was also refreshing to see that many of its food and beverage tenants are new and offer something different as compared to all the other malls in the area.

With such a good mix of anchor restaurants, as well as unique food choices that cannot be found in any other malls, PLQ Mall is definitely a must-visit. 15 Weird Food Combinations We’ve Tried So That You Don’t Have...