In a small coffee shop at Jurong West, Qi Lin Xuan Chicken Rice Ball provides three variations of chicken rice in an interesting way. With the option to choose between roasted, steamed and soy sauce chicken, this stall also offers a diverse array of zi char dishes like crab and prawns. The difference between Qi Lin Xuan chicken rice and the others you see at most hawker centres is that the rice is moulded into balls. Commonly found in Melaka and also a part of Hainanese culture, this process may seem like a marketing gimmick—but believe it or not, there have been theories as to why the rice is shaped like that.

To name a few, many have speculated that it was created by peddlers for easier transportation of rice back in the olden times. They also claimed that it helps to retain the fragrance of the chicken rice. Another theory of how it came about is that chefs innovated this brilliant idea to keep these rice balls warm for a longer period of time.

No matter the theory, I decided to give these a try to see if it tastes as good as it looks. 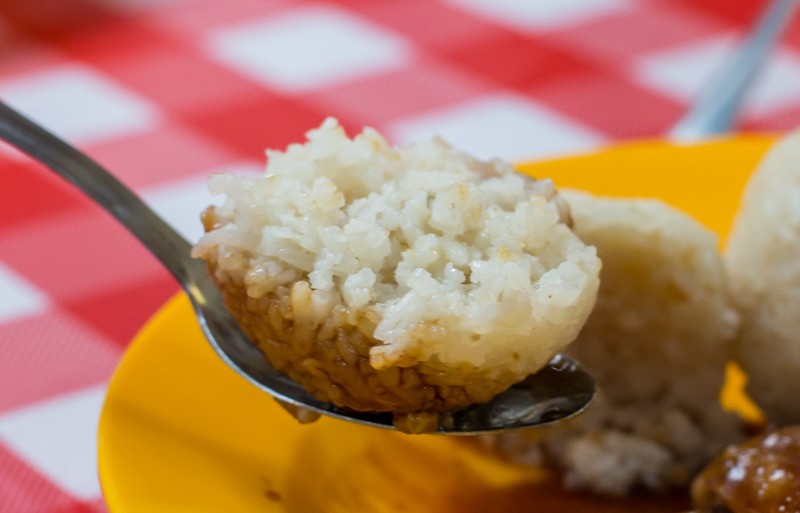 Upon cutting open the rice ball, I noticed that the interior of the ball is significantly moister than its shell. I ordered plates of roasted, steamed and soy sauce chicken separately (S$3.50 per plate). Even when I dug into the last plate of the three, I couldn’t help but notice that the rice was still warm, especially on the inside.

The rice was very fragrant, and a little wetter than the standard chicken rice. The reason for its texture is probably to hold the integrity of the rice ball and to retain its perfectly round shape. Glistening in the light, the skin of the roasted chicken was heavenly. The meat was soft and tender, and I appreciated that it was boneless. The chicken came with three separate rice balls, and I was surprised to see that the balls didn’t fall apart easily. 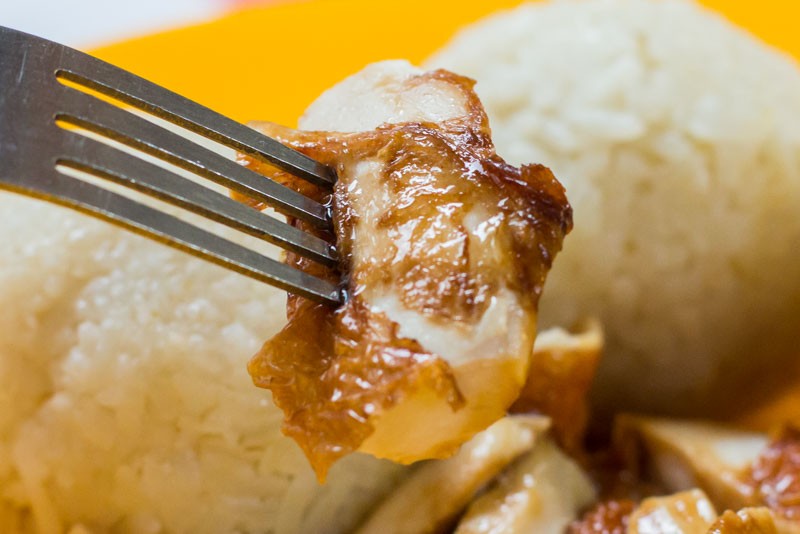 One thing I didn’t really like about this dish was how sparse the skin of the roasted chicken was. Personally, when I enjoy roasted chicken rice, I look forward to having the juicy golden-brown skin. I was a little disappointed when I saw that there was such a measly portion of it.

I also noticed that there was very little gravy, which is another part of chicken rice I anticipate. Trying the different variations out with the chilli, I was highly disappointed. Qi Lin Xuan’s chilli didn’t taste like the traditional Hainanese chicken rice chilli, and it tasted a tad sour. I struggled to find the spiciness in the chilli but to no avail as well. 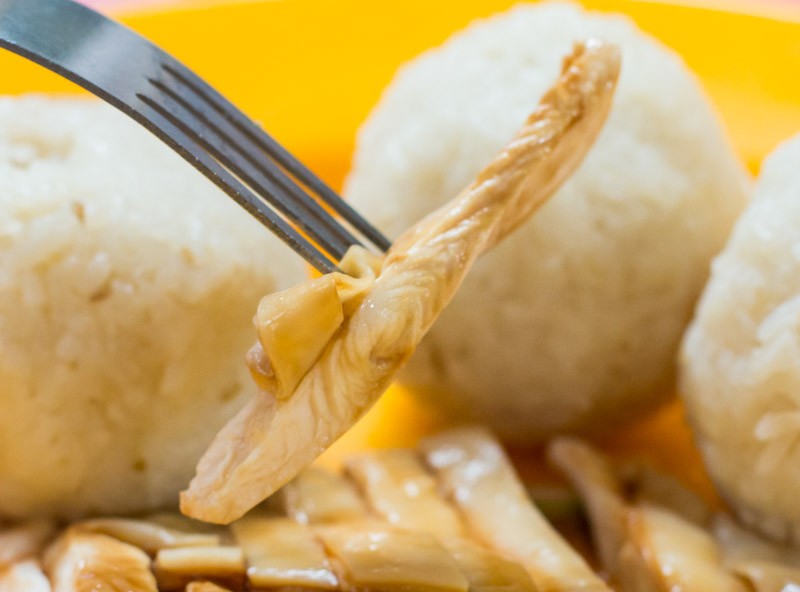 Served alongside three chicken rice balls, the steamed chicken had a notably different bite as compared to the roasted chicken. I could tell this was the breast meat because of its firmer texture. Because I prefer having the chicken thigh for its more tender meat, this didn’t cut it for me.

The meat also tasted a little mundane, just like a plate of steamed chicken rice you can get at any store. 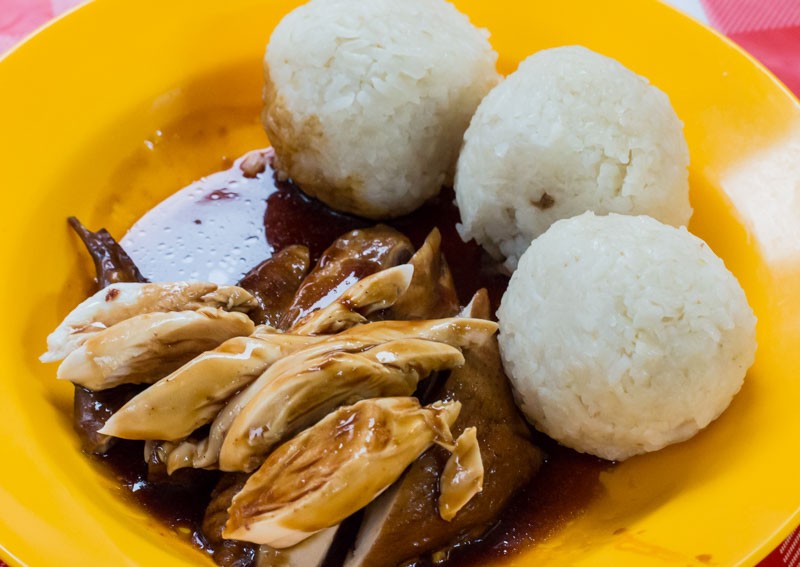 I loved that the soy sauce chicken had tons of gravy underneath the chicken. Slightly salty and a little burnt, the sauce went amazingly with the rice balls. The only gripe I have is how the skin was also barely present. 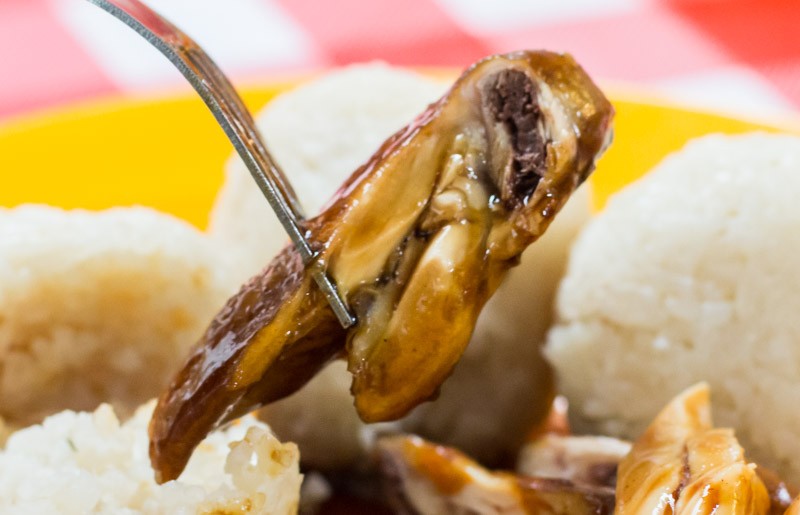 It also hasn’t been deboned, so if you don’t mind this, you don’t have to specify the part of the chicken you’d like when ordering. The consistency of the sauce was a little thick and gooey, just the way I like it, and the meat was extremely tender.

If I had to choose my favourite out of the three, it would be the Roasted Chicken Rice Ball. I could see this being popular among the kids as well because of the shape of the rice—an adorable and quirky twist on the usual chicken rice we can find. Despite the lack of sauce, it was still tender and juicy. The chicken paired well with the rice balls and I was impressed with how the rice was still so fragrant.

Overall, I felt that my visit to Qi Lin Xuan was slightly mediocre apart from the bizarrely-shaped chicken rice balls. With the circuit breaker now in place, I urge only those living or working around the area to head down and dabao these chicken rice balls if you’re willing to give them a shot.

Who knows—the myth of retaining warmth might just be true and you’ll still be enjoying a delicious warm meal by the time you reach home!