“Cantonese cooking is all about subtlety” This year, Royal Pavilion’s Chinese New Year dishes are finely curated by Mr Ray Tso – the brand’s Director of Kitchen & Operations. Before tucking into the fine Cantonese cuisines, he gave us an insight to Cantonese cooking which is all about subtlety and letting ingredients speak for themselves. True to this rule, the dishes at Royal Pavilion were not prepared with excessive flavourings and spices. Instead, all retained their natural flavour and freshness. 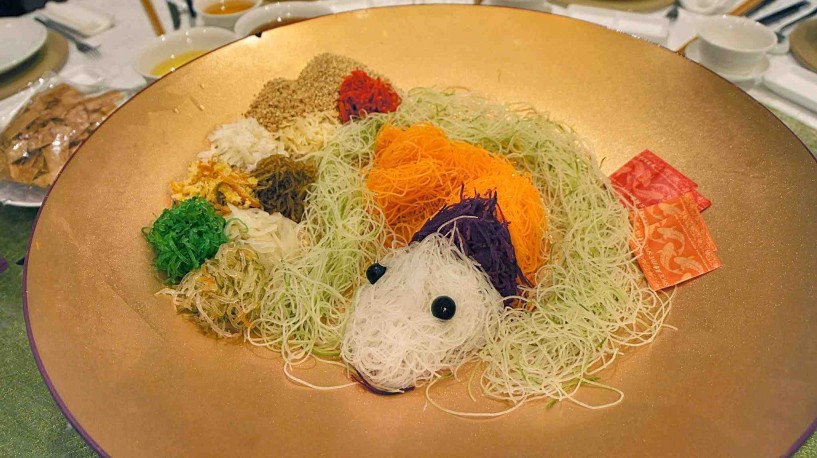 Royal Prosperity Salmon Yu Sheng ($68++ / $88++). Yúshēng (鱼生) is known as a homophone for Yúshēng (余升) which means increasing abundance and prosperity. It remains as my all time favourite Lunar New Year dish. When this was served, my fellow diners were thrilled to see it in the form of a fish. Though excited too, (The visual appeal of a dish is important) what went through in my head there and then was – Kudos to the chef who had to painfully arrange the ingredients into a fish mould. A+ for effort definitely.

There are many versions that exist but Royal Pavilion choose to serve theirs in the most honest and original version of it with sweet plum sauce, shredded vegetables and raw fish, and I have absolutely no complaints about that. Good old fashioned Yúshēng – just the way it is. 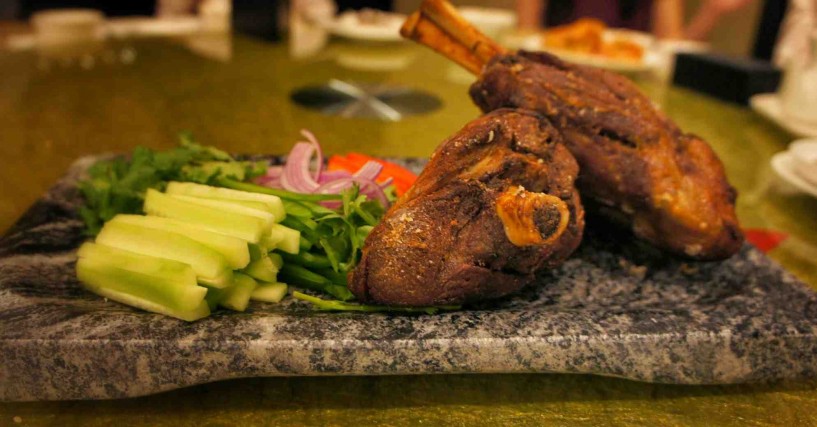 Royal Fried Lamb Shank ($48++). The lamb shank here was deep-fried but not greasy and had a tender texture in a crisp layer of browned and crackly skin. It was somewhat similar to Peking Duck because the service staff will later slice the meat up and wrap it in rolls of handmade rice paper with hoisin sauce and coriander. It was, however, a refreshing change on the palate with lamb meat used.

The meat did not have the overpowering  ‘muttony’ taste, as lamb is meat from sheep that are less than a year old while mutton is meat from sheep that are older than a year. Hence, lamb has a less intense flavour as compared to the older counterpart. You definitely do not need the ‘acquired’ taste to enjoy this dish. Lamb consumption has always been significantly lower amongst the Chinese but with this rendition, Royal Pavilion might remedy that situation. 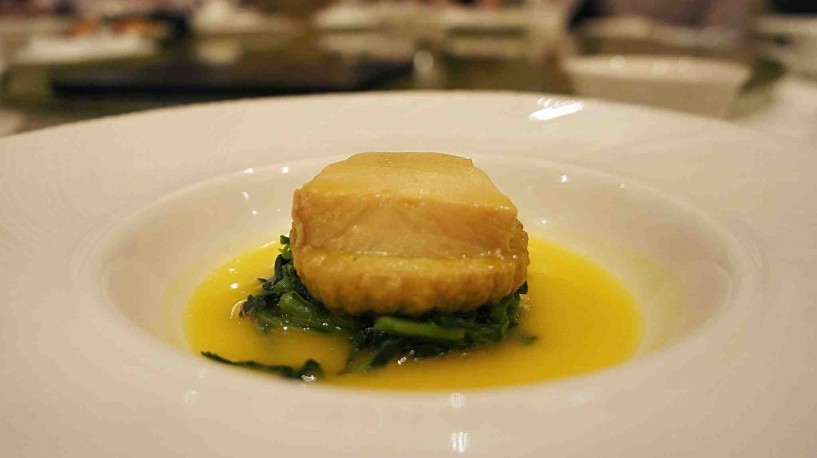 Braised 4-Head South African Abalone in Superior Pumpkin Broth ($68++). Did you know the “head count” of an abalone refers to its weight? The greater the number, the smaller the abalone. A 4-head abalone is considered as average sized.

This combination really hit the spot for me. The pumpkin broth had a very concentrated natural sweet, nutty flavour and was not overly laced with spices and other assertive ingredients. The tofu that serves as a pillow for the abalone was rightfully pillowy soft in the inside and had a well-seasoned and crisp crust. A mouthful of everything together which was an utter delight. Royal Smoked Duck ($35++ / $68++). This is the restaurant’s signature dish and it came in a beautiful mahogany, a telling sign that it is well-smoked. The meat was tender and juicy, having a subtle sweetness from lychee tea leaves and a good hint of smokiness. It is absolutely fine on its own, but add the accompanied plum paste and you get a dish that will win over any comparative chicken dish.

Many Chinese New Year dishes are created to represent good fortune, prosperity and abundance but feasting with loved ones during the upcoming festive is the most important part. Here’s wishing you (in advance) a happy lunar new year, good health and many yúshēngs!

These Chinese New Year creations are available for dine-in and takeaway from 9 February to 5 March 2015. A 1-day advance order is required.