There’s just something about a thick sandwich that makes my mouth water. It could be the lightly toasted bread, the smell of melted butter, the oozing cheese, or the stack of juicy fillings…

Sando Singapore, tucked away at Alexandra Technopark near Labrador Park, is the latest to join the hipster delis and bistros selling sandwich stacks. But here’s a delicious twist — its menu is inspired by Japanese cuisine. 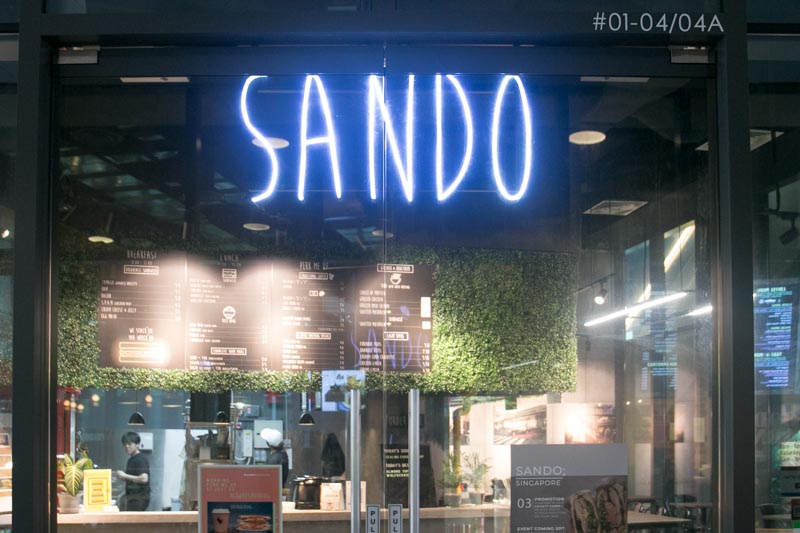 Opened by three friends in October 2018 who were blown away by the gourmet sandwiches they tried in Japan, Sando comes from sandoitchi, which is the Japanese word for ‘sandwich’.

The menu includes both breakfast and lunch sandwiches, as well as rice bowls and healthier alternatives, such as soba bowls and vegetarian sandwiches.

I was also pretty impressed with the prices. The cheapest sandwich on its menu is the Classic Egg Mayo (S$3) sandwich, while its priciest is the Soba w “Wasame” Dressing with Smoked Duck (S$12.50). 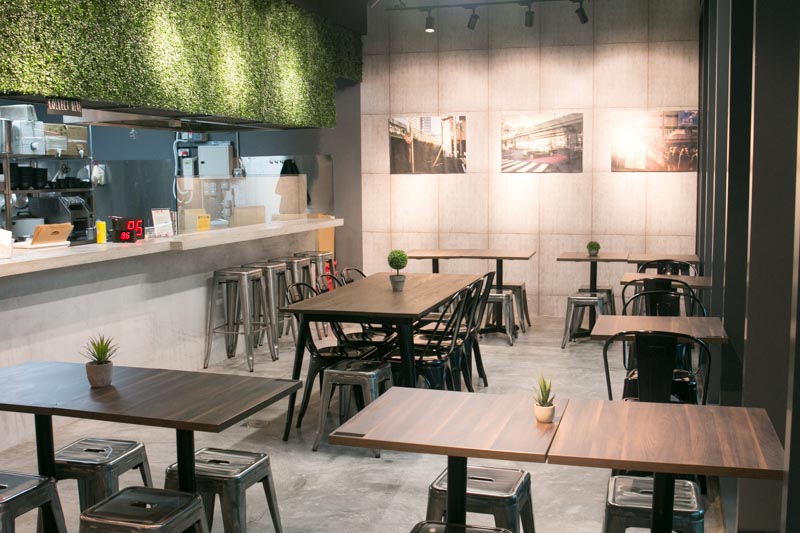 Alexandra Technopark spans a stunning one million square foot, with three large buildings housing tons of offices and a range of amenities such as F&B outlets, gym facilities, a medical clinic, and other support services.

Sando is conveniently located between Blocks A and B, at The Hub. Its interior is pleasantly chic and clean, and sports a mesh of industrial-inspired decor and fresh greenery, such as metallic chairs, concrete flooring and counters, and a large grass wall. 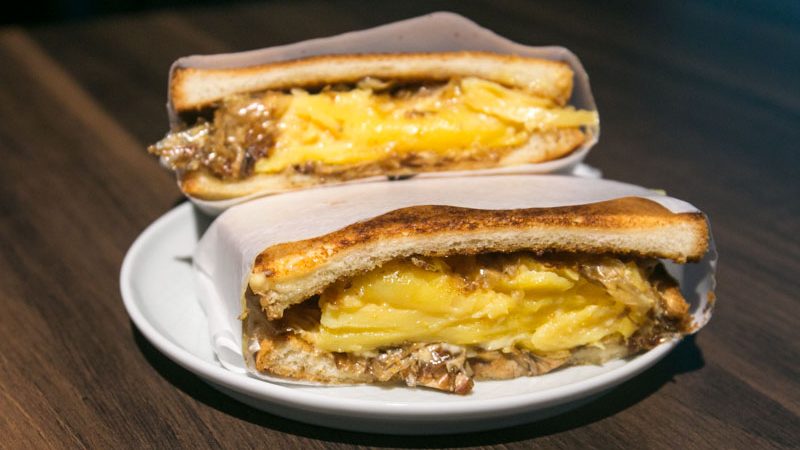 Sando’s Breakfast Menu (available from 8am – 11am) spans across five tantalising sandwiches, including Classic Egg Mayo (S$3), the cheapest sandwich on its menu, Spam-wich (S$4.50), and Bacon-wich (S$5). I decided to start off our meal with the Tamago (S$4).

The tamago was cooked in a traditional Japanese way, which involves a rectangular omelette pan, resulting in delicately thin layers of rolled seasoned egg. 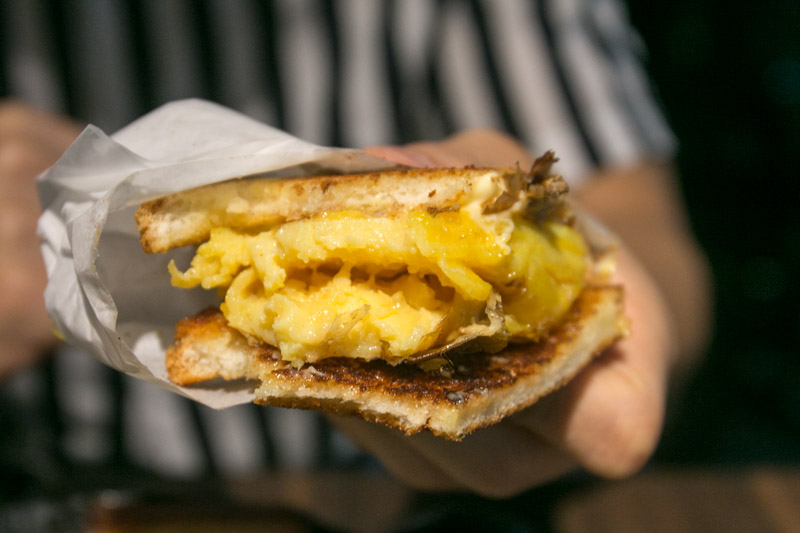 This was by far, the best tamago sandwich I’ve ever had in my life.

The omelette was sweet, fluffy and soft, with layers that were sooo thin I couldn’t even identify where it started or ended. I especially loved it that the eggs were cooked just right — not too runny, not too firm, and yet still deliciously soft.

I particularly liked how the bonito flakes added that hint of umami flavour to each bite, as well as a roughened paper-like texture which helped ease the jelak-ness of the omelette.

I’m not even kidding when I say that I could have this for breakfast every day, and I’d be soooo satisfied. 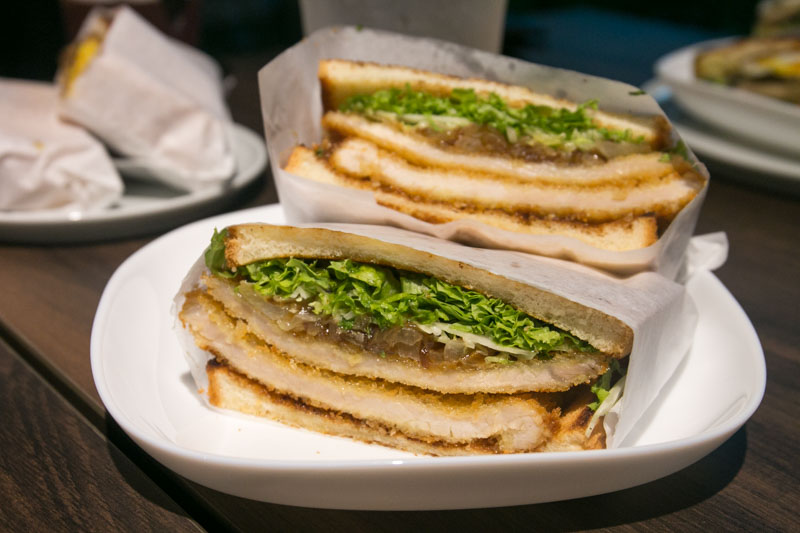 Moving onto its Lunch Menu (available from 11am – 4pm or until sold out), I ordered the Katsu Sando (S$8.50). This came with two slices of panko-breaded pork loin, caramelised onions, healthy greens, and tonkatsu sauce. 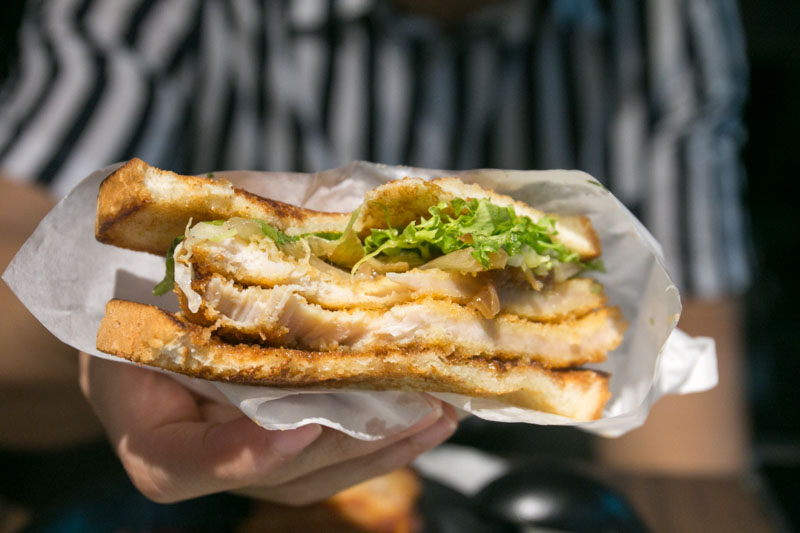 What I really loved about Sando’s Katsu Sandwich was how crispy the panko-breaded pork loin was. The meat was springy and sweet, with a nice firm bite to it, and the caramelised onions added a tinge of honey-like sweetness to it.

I wish, however, that there was more sauce so it would’ve added a different texture to the sandwich. While there were caramelised onions and greens, it was insubstantial when compared to the toasted bread and two layers of katsu, which was more crunch than anything else. 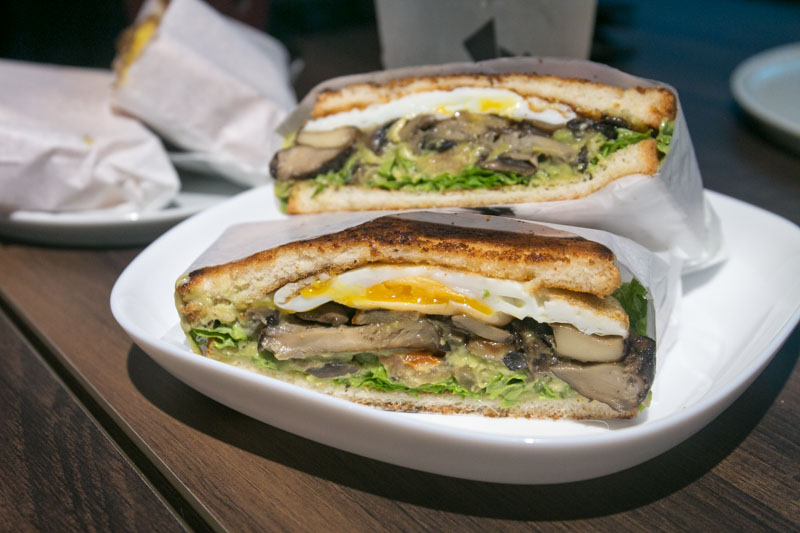 The third sandwich I was quite excited to try was the Mushroom Trio Sando (S$9.50), a vegetarian sandwich that included a mixture of shiitake, button and oyster mushrooms, freshly-made guacamole, a sunny side up and mixed greens. 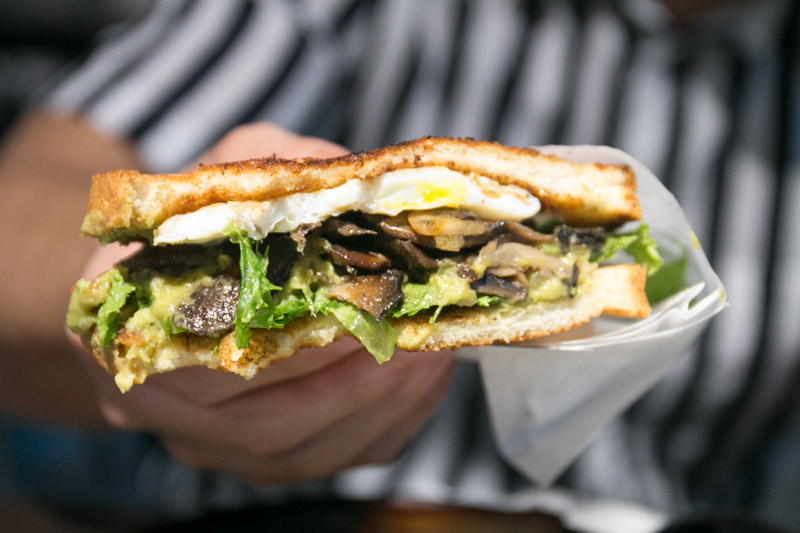 The mushrooms were well-grilled with a rustic and earthy smoky flavour, which paired nicely with the creaminess of the guacamole.

I also really appreciated that Sando was super generous with the yummy guacamole — I even spotted large chunks of freshly-cut avocado!

For those looking for a lighter or healthier alternative, go for Sando’s Mushroom Trio Sando. Though it’s one of the pricier sandwiches on its menu (the majority of them average out to be around S$8), you’re definitely paying for a good sized portion, as well as high-quality food. 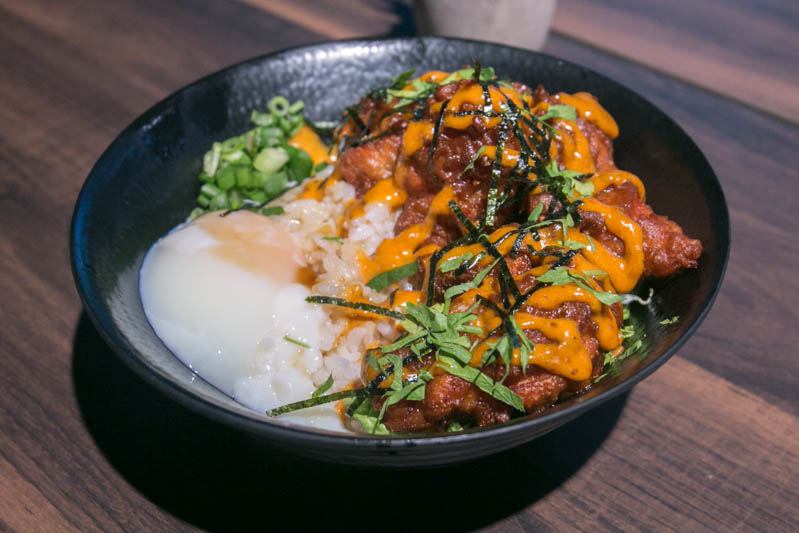 All of Sando’s rice bowls are priced affordably at S$8.50, and come with a large amount of rice, your choice of protein, an onsen egg, nori, and spring onions.

I went for the Chicken Karaage Rice Bowl (S$8.50), which came with sambal mayo dressing. 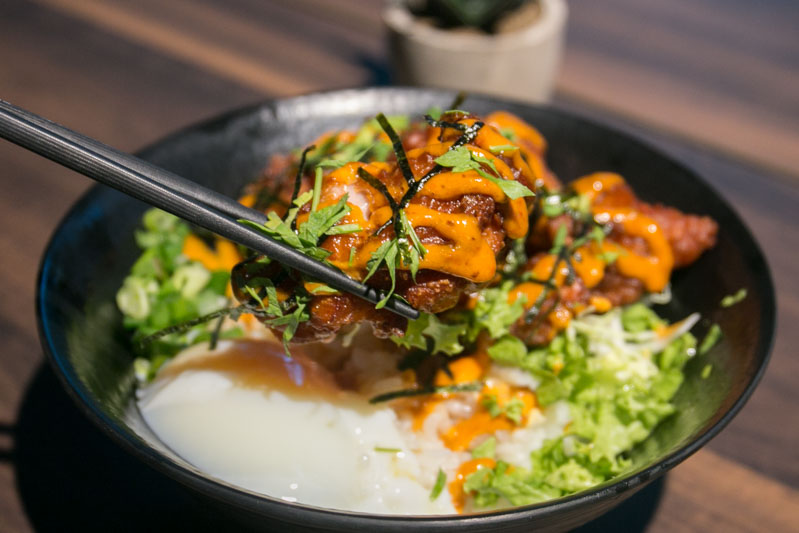 The chicken karaage was downright delicious. Each chunk of chicken thigh was deep-fried to a glorious crisp, but when I bit into it, I was happy to find that the chicken meat was still moist and juicy.

The sambal mayo was definitely a unique twist on the typical karaage sauce. The taste was a range from honey mustard to sweet chilli, and it packed a spicy punch. Yet, it had this addictive umami flavour to it that made me want to go back for more. The onsen egg was delightfully runny, and gently prodding it with our utensils revealed a soft and silky egg white with a creamy, almost custard-like yolk.

I ended up mixing the onsen egg directly into the rice and enjoyed how it gave each spoonful of rice a velvety texture. 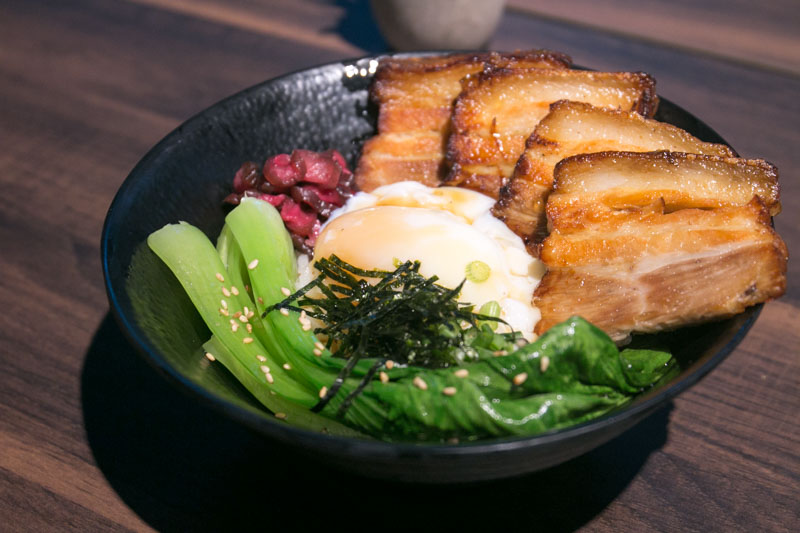 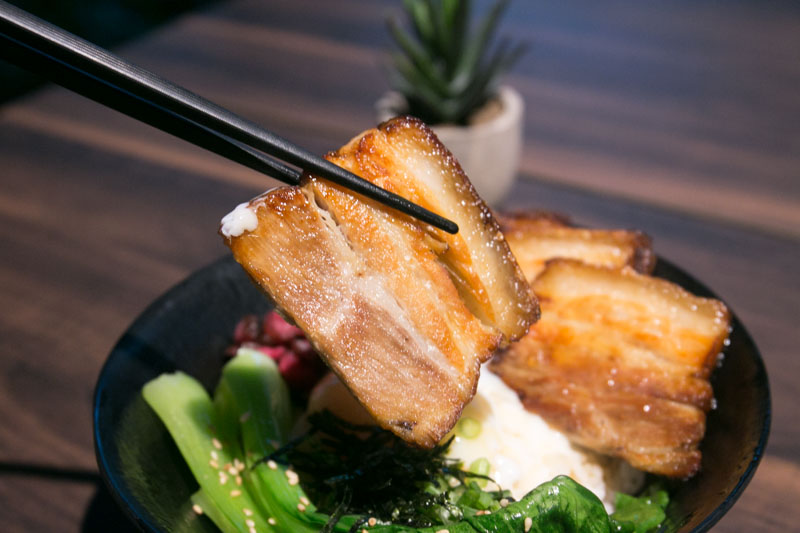 In all honesty, I was a little apprehensive just looking at how thick each slab of pork belly was. I expected it to be tough, chewy and dry, but I was surprised at how tender the meat was.

Though the fat wasn’t entirely melt-in-your-mouth worthy, the meat was still deliciously springy without requiring too much jaw work, and the meat-to-fat ratio was just right.

It gets a little jelak after a while, especially because of that smokiness from the torched pork belly. I’d advise you to pair this rice bowl with a refreshing drink or hot tea. 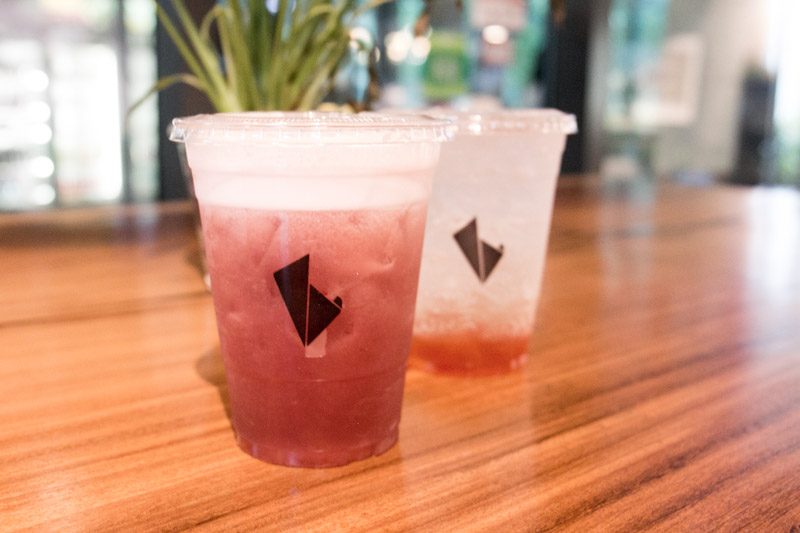 Speaking of drinks, Sando has launched a new line of soda and sencha drinks. Sencha is a type of Japanese tea where whole tea leaves are infused in hot water.

I liked the Mixed Berry Soda (S$4.50), which satisfied my sweet tooth thanks to the fizzy sweetness. As for the Grapefruit Sencha (S$4), I found it hard to mix the syrup and carbonated water, but because of the matcha-like sharpness, it made for a great thirst quenching drink.

If you happen to work around Alexandra Technopark, I envy you. Sando Singapore’s sandwiches and rice bowls are super affordable (especially its breakfast menu, which cost S$3 to S$4.50 per sandwich) and it’s pretty darn yummy too.

I could totally imagine myself buying a Tamago (S$4) or a Ham-wich (S$4.50) — which consists of a Japanese omelette, smoked ham slices, mixed greens and mayo — every day for breakfast. I could just sit at my desk slowly enjoying my sandwich and a cup of piping hot black coffee.

Too bad it’s at such an ulu location. If Sando Singapore opened another outlet at a more central location (or one near to my home or office), that’d be such a dream.