These days, all it takes is one glance at a hawker stall’s snaking queue to know whether it’s good or not. Lunchtime at Tanjong Pagar Plaza Market & Food Centre is a bustling affair, but I noticed a constant snaking queue at Soon Heng Food Delights and decided to check the stall out. After speaking with Mdm Chua, I learnt that its former stall owner used to sell shark meat fritters. When Mdm Chua and Mr Tang took over the stall in 2000, they decided to keep the shark meat fritters as toppings for their lor mee. The sight of the golden deep-fried shark meat fritters is hard to miss. For S$4, this bowl of lor mee is really value-for-money. You’ve got two pieces of fried shark meat nuggets, slices of braised pork belly, one piece of fried wanton, half an egg, fried dough fritters, and a generous dollop of grated garlic and chilli. Of course, all drenched in a thick, viscous gravy. I was most excited to try Soon Heng Food Delights’ fried shark meat fritters. Eagerly, I took a bite of the shark meat nuggets, admittedly even before I mixed all the other ingredients together. 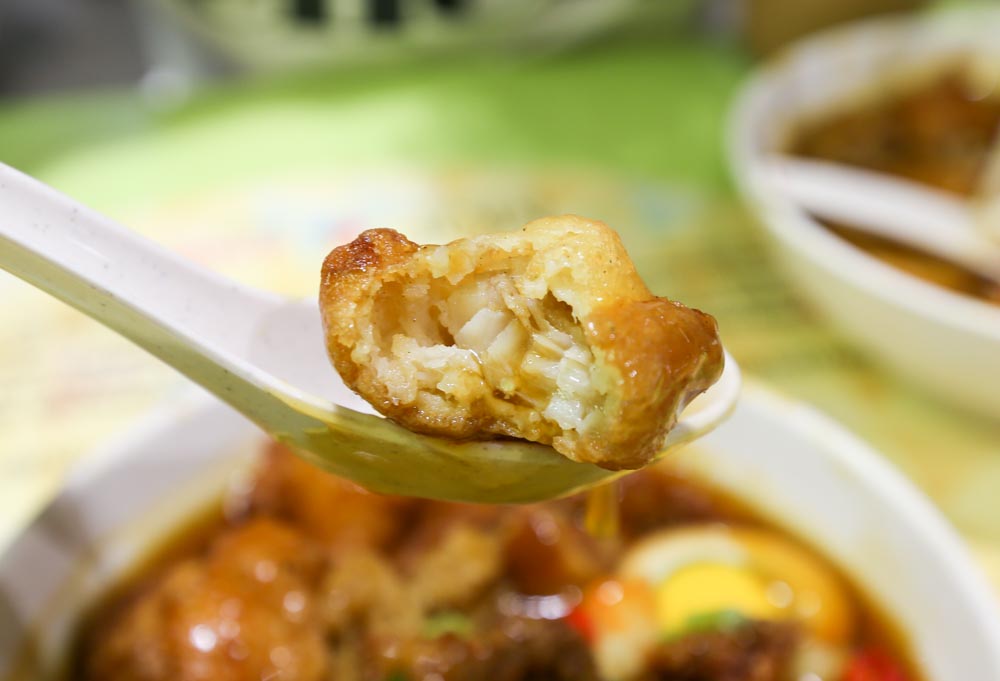 These were little golden nuggets of absolute goodness. I loved how the batter was crispy and had that distinctive deep-fried doughy flour taste, and to some extent, its texture reminded me of vadai— crispy and smooth on the outside, but soft and spongy on the inside.

What about the shark meat itself? Frankly, if I had eaten this in a blind taste test, I would’ve thought it was regular fish meat. The white meat was silky, firm and slightly sweet, with a slight fishy aftertaste that wasn’t entirely unpleasant.

Here’s a tip: don’t leave these deep-fried shark meat fritters to the end as the batter will get soggy fast. The one thing I really liked about Soon Heng Food Delights’ lor mee gravy was how fragrant it was.

Almost immediately, I could taste the sharpness of the black vinegar, followed by a hint of spice from the chilli. There was a touch of sweetness to the gravy, but it was balanced out nicely by the grated garlic. The chopped spring onions added a well-needed zest to each spoonful.

In terms of viscosity, the gravy wasn’t too thick or thin, and I alternated between drinking it like soup and slurping it up with the noodles.

For those who prefer a punchier kick to your gravy, they serve black vinegar on the side as well, so you can add as much vinegar as you’d like. One of my favourite elements of the dish were the deep-fried dough fritters.

Essentially, it’s just deep-fried dough batter, but it retained a nicer crunch as compared to the shark meat fritters despite being doused in the thick lor mee gravy. It was so addictive that I couldn’t stop munching on it. In my personal opinion, a bowl of lor mee or laksa yong tau foo isn’t complete without an egg.

Arguably, there wasn’t anything special about the braised egg, but It’s still one of my guilty pleasures because of how the yolk absorbs up all that savoury goodness from the starchy lor mee gravy, especially towards the end of the meal. Soon Heng Food Delights’ wanton had more deep-fried skin than meat so biting into it was a little disappointing, but I still enjoyed how it provided a nice crunch.

Just like the deep-fried shark meat fritters, don’t save the fried wanton till the end as it’ll get soggy very quickly. For comparison, I ordered the Fried Shark Lor Mee (S$5).

For just S$1 more, I was surprised to find double the number of deep-fried shark meat fritters— this bowl had four pieces!

Mdm Chua also told me that the S$5 version has deep-fried ngoh hiang as well. Even though the ngoh hiang had been deep-fried till it was completely crispy, I could still taste the pepperiness from the meat. Each bite was smoky and savoury, and it went incredibly well with the salty spiciness of the lor mee gravy.

I wish there had been an option to add more ngoh hiang to the bowl, because I’d have done so in a heartbeat. After polishing off the lor mee, I finally understood how Soon Heng Food Delights could afford to sell one dish on its menu for the past 20 years. This was a fantastic bowl of lor mee and you’re really getting great value for your money.

Frankly, I don’t see the appeal in the deep-fried shark meat nuggets as it tasted like regular fish meat to me, but I’ve got to say that the crispy-on-the-outside and spongy-on-the-inside batter was spot on, and went superbly with the thick braised gravy.

My advice to you: always get the S$5 bowl of lor mee. For just S$1 more, you’ll be getting more deep-fried shark meat fritters, crispy bits of fried flour and ngoh hiang.

Where to eat: 15 best lor mee stalls to visit in Singapore