If you frequent the Dhoby Ghaut area, chances are you might have passed by Peace Centre without realising. 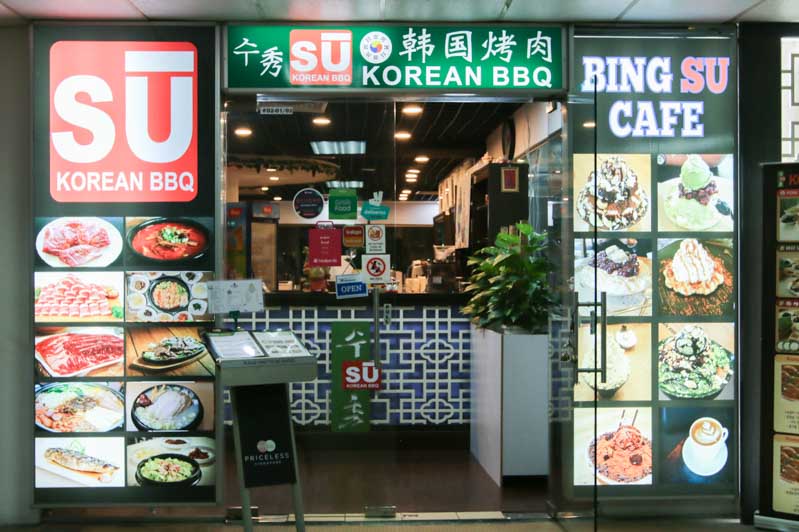 The unassuming building is where home-grown Korean Restaurant SU Korean Korean BBQ is located at. 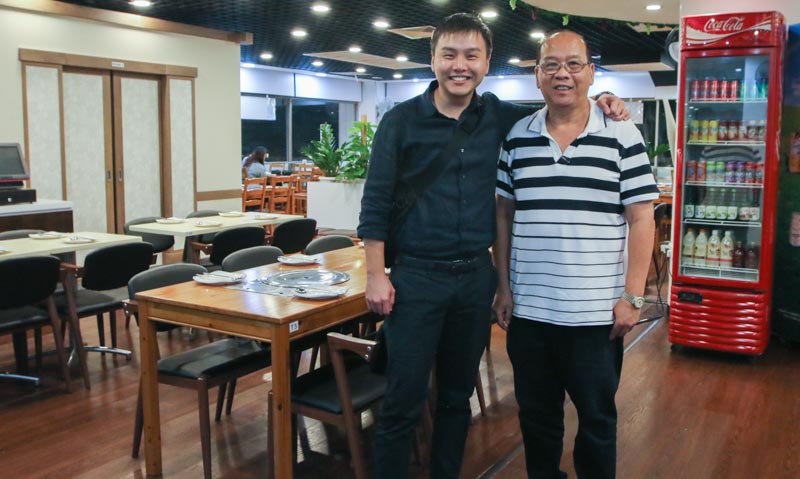 SU Korean is owned by Mr Albert Lum (right), who previously helped to set up and manage various Korean barbecue restaurants. He decided to open his own Korean restaurant and hopes SU Korean can serve as a family-friendly place with value-for-money food.

His son Melvin (left), who has his own full-time job, helps his father with the family business whenever he can.

Could this place be a hidden gem in Dhoby Ghaut? We decided to find out by having a Korean feast.

We ordered from their Lunch Special Menu (S$9.80+), which comes with one main and free-flow banchan (side dishes). You can top up S$1 for free-flow water or Korean Tea.

For our mains, we opted for the Soybean Paste Soup and Tofu Soup with Seafood (spicy), which came with a bowl of rice each. Before our orders arrived, we started on the banchan, which are a staple to accompany most Korean meals. I liked that SU Korean serves seven different types of side dishes, ranging from kimchi to beansprouts and potatoes.

Whenever I get Korean food, I pay the most attention to the kimchi, because I enjoy pairing it with my meal. I found the kimchi to be crunchy but still soft and had just the right amount of sourness for me. It was also spicy but not too overwhelming. 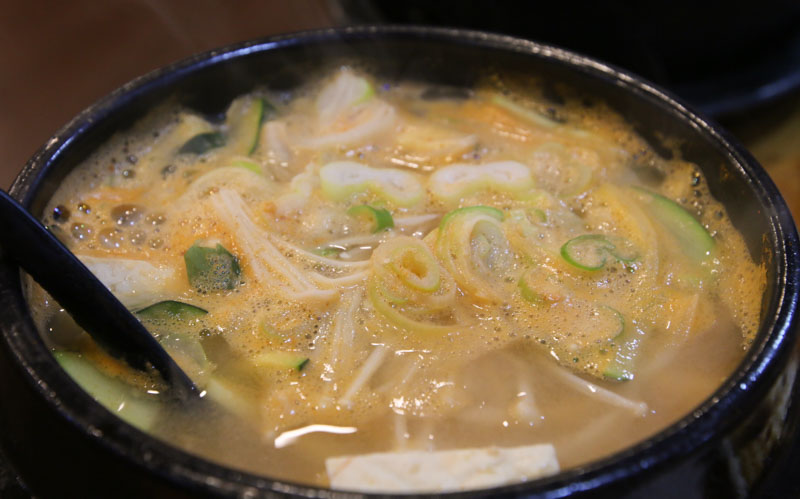 When our mains came, we gave the Soybean Paste Soup a taste first to kick-start our appetite. 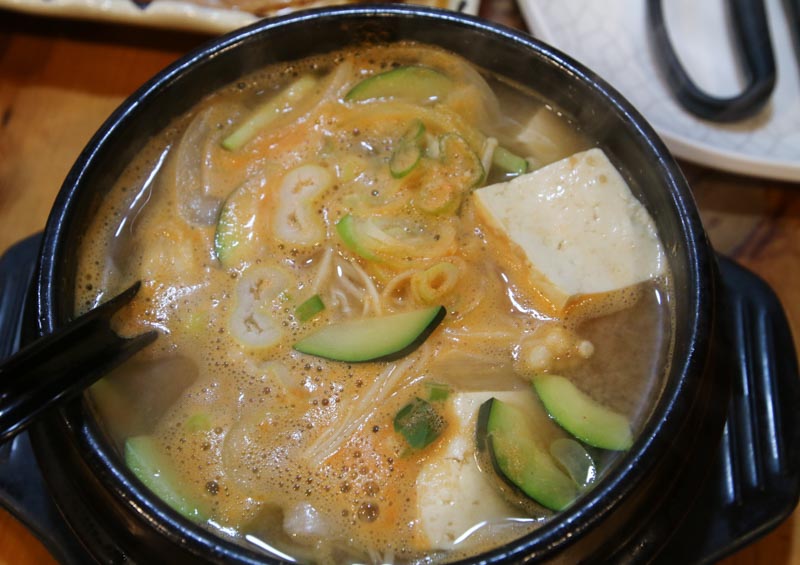 Their soup comes in a thinner consistency compared to other restaurants that serve it thicker and more stew-like. I personally enjoy my broth thicker, so I found SU Korean’s version a little too thin for my liking. 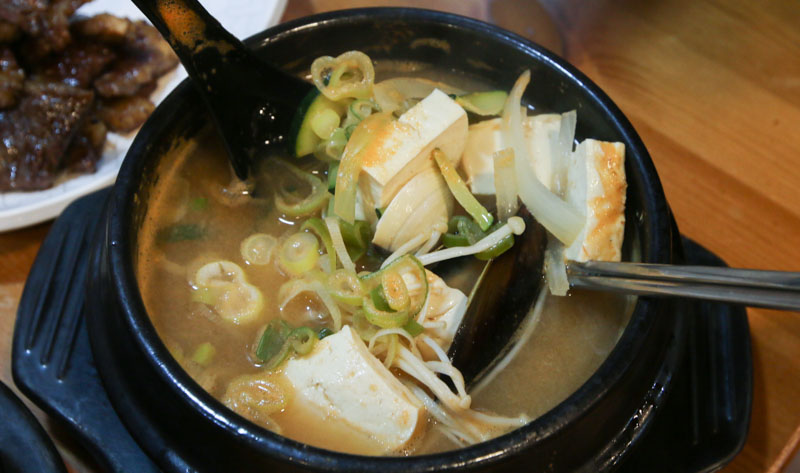 I still felt that the soup delivered a distinct earthy and slightly pungent taste expected of soybean paste soup.

I also liked that it came with huge chunks of tofu, which were firm but soft. There were also plenty of other ingredients like enoki mushrooms, zucchini, mussels, clams, prawns and squid. 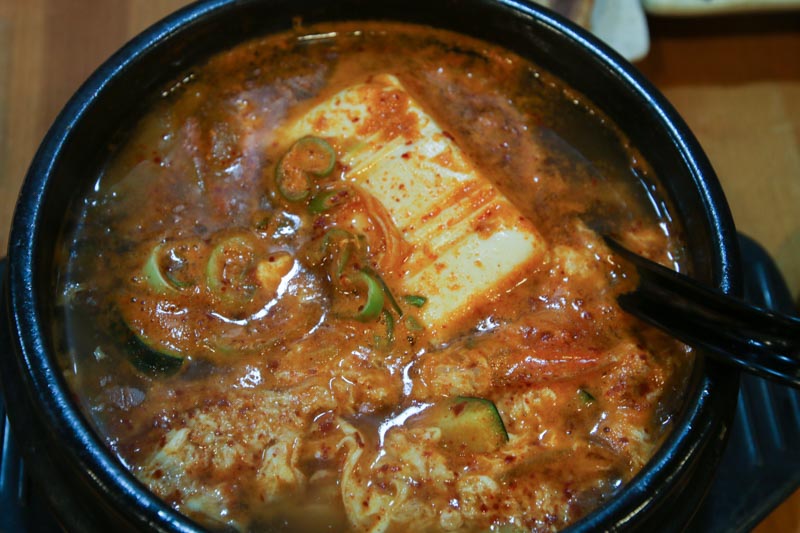 To spice things up, we went for the Tofu Soup With Seafood (Spicy). 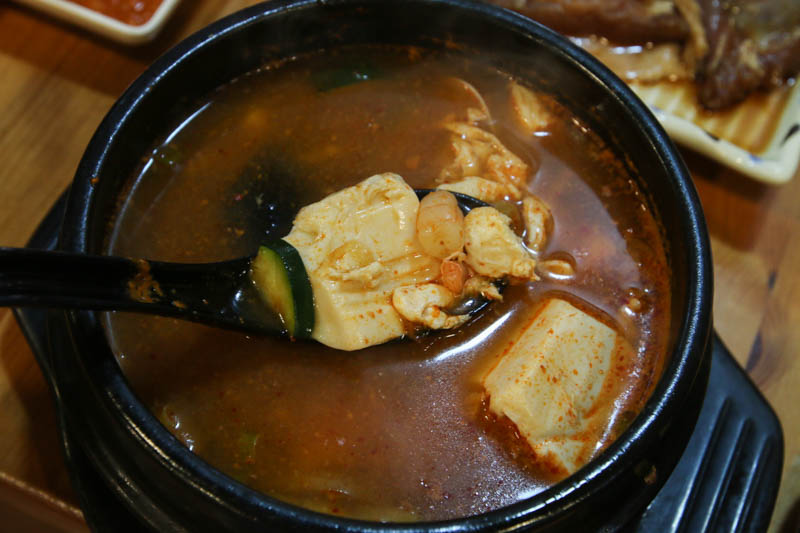 The soup comes in a thinner consistency as well, but still had a fair amount of umami flavour from the seafood. The amount of spice was also just right and not overwhelming. However, I would have enjoyed the soup a bit more if it was thicker. 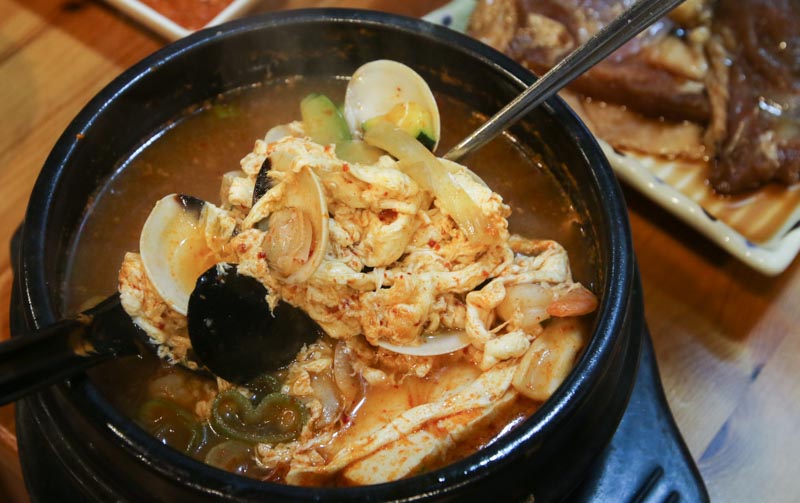 The soup comes with generous portions of egg, which made the soup more flavourful and wholesome.

You can also expect ingredients like tofu chunks, zucchini, prawns, clams, mussels and squid. The bowl felt like a treasure trove, and each spoonful provided plenty of seafood goodness.

Apart from the thinner consistency of their soups, which some people might prefer, I enjoyed both soups, especially since they were packed with ingredients. 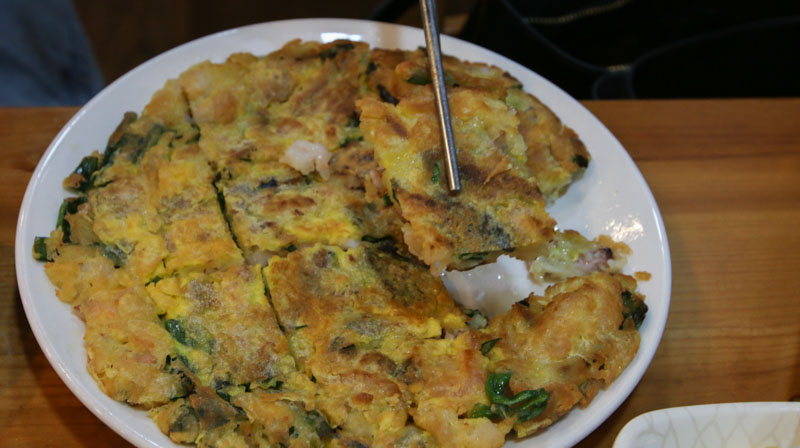 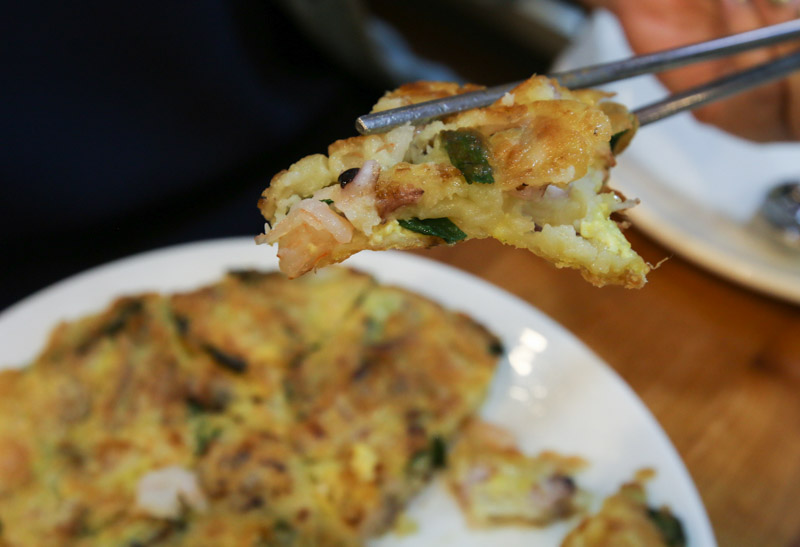 Let’s start off with how huge the pancake portion is, especially at S$14.80. Nowadays, these pancakes usually cost up to S$20 for a huge portion like this.

The pancake batter was light and thin, which really reminded us of an oyster omelette. The skin was still crispy, while the insides were fluffy and packed with ingredients like prawns, octopus, chives and eggs. It is best to eat a slice with the accompanying sauce, which adds a salty and sweet taste to the pancake. 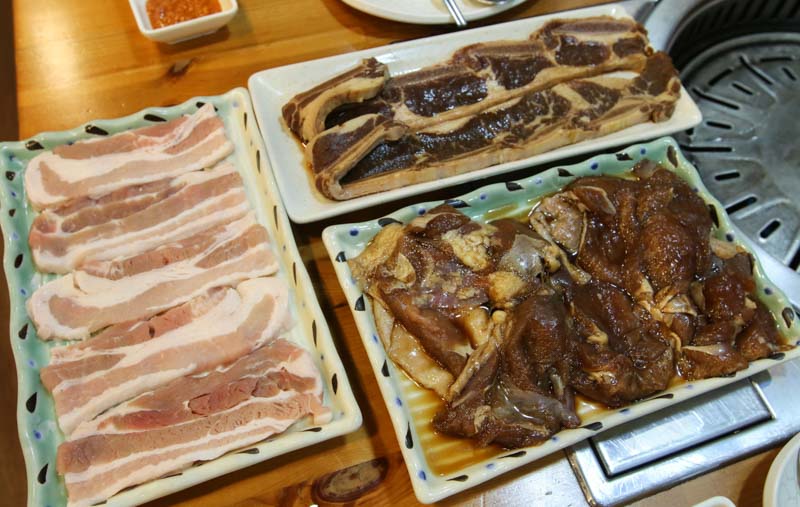 Since one does not simply visit a Korean restaurant without getting some Korean BBQ goodness, we tried their Original Pork Belly (S$14.80), Chicken Teriyaki (S$12.80) and LA Galbi Beef (S$20.80). 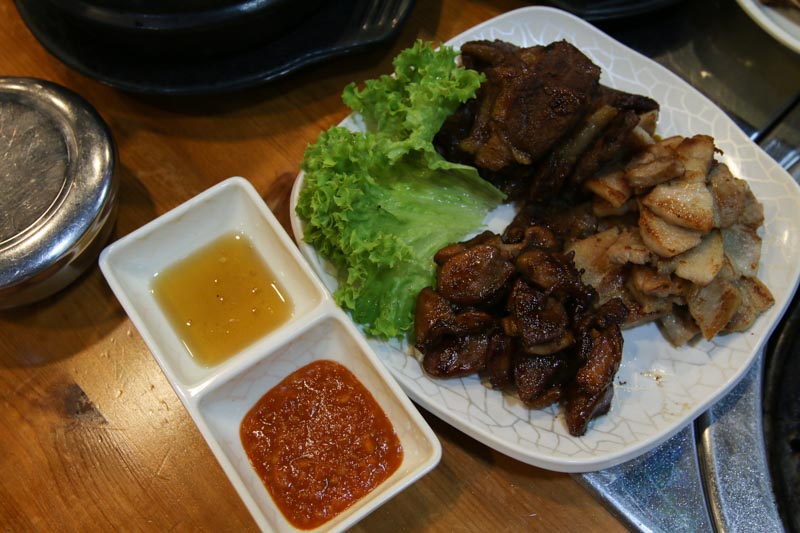 I probably enjoyed the Teriyaki Chicken (S$12.80) the most. The teriyaki marinade gave the chicken a nice honey-like glaze, which was well-absorbed by the meat. Since the soups we had were on the lighter side, it was nice to coat our palates with some much needed greasy flavours.

I was glad that there was more meat than fat, because each bite gave a nice and tender chunk of chicken. I also appreciated that the meat wasn’t thin and tough, unlike some that I’ve had at other Korean barbecue places. The LA Galbi Beef (S$20.80) was my second favourite because it was surprisingly really tender, and almost melted in my mouth.

It was a happy surprise since I know beef can become pretty tough when grilled. The fatty skin also added a nice extra coating of greasy flavour with each bite. The beef is marinated with SU Korean’s secret in-house mixture, but the salty and sweet flavour from soy sauce is fairly prominent, as that is what galbi (short ribs) is usually marinated with.

And after being on the grill, there is a smoky-sweet caramelised taste to the meat too. 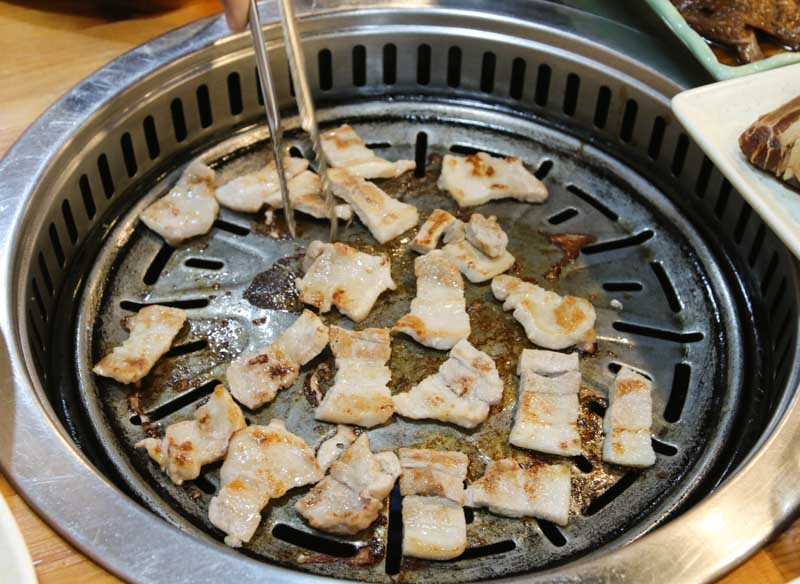 I usually enjoy having pork for Korean BBQ the most, but I found that the Original Pork Belly (S$14.80) paled in comparison to the chicken and beef. The meat was a tad too tough for my liking, and it was less juicy than I would have liked it to be. 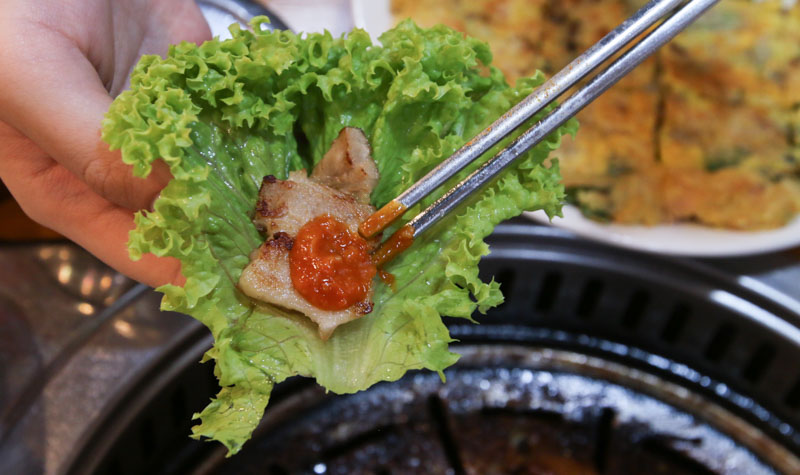 There was not much flavour to the pork since it was not marinated with any sauces, but dipping it in the accompanying ssamjang (thick and spicy Korean paste) can add a spicy and sweet kick. You can also wrap the meat with lettuce for a refreshing crunch.

Overall, I feel that SU Korean serves Korean barbecue priced on the slightly more affordable side, compared to some restaurants where a plate of meat could cost up to S$25. Despite the affordable prices, they still maintain a decent quality of the meats.

And even though their soups weren’t as thick I would like them to be, they were still flavourful and chock full of ingredients.

While I might not gravitate towards their soup menu, I would definitely come back for a KBBQ session here at SU Korean with my friends—all for their value-for-money meat selection.

Looking to expand your list of go-to Korean food or barbecue places? Next time you’re in the Dhoby Ghaut area, give SU Korean BBQ a try for their affordable and tasty meat options!