The folks behind Tipsy Penguin and Lady Wu have come up with a new ramen concept: Takeshi Noodle Bar. 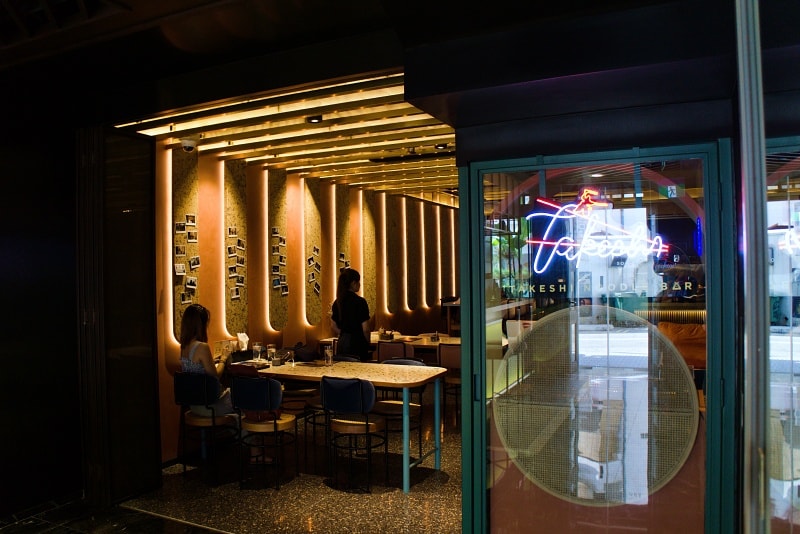 I was immediately taken aback by how snazzy Takeshi’s interior was.

Oh, the wonders that lie within an unassuming shophouse! 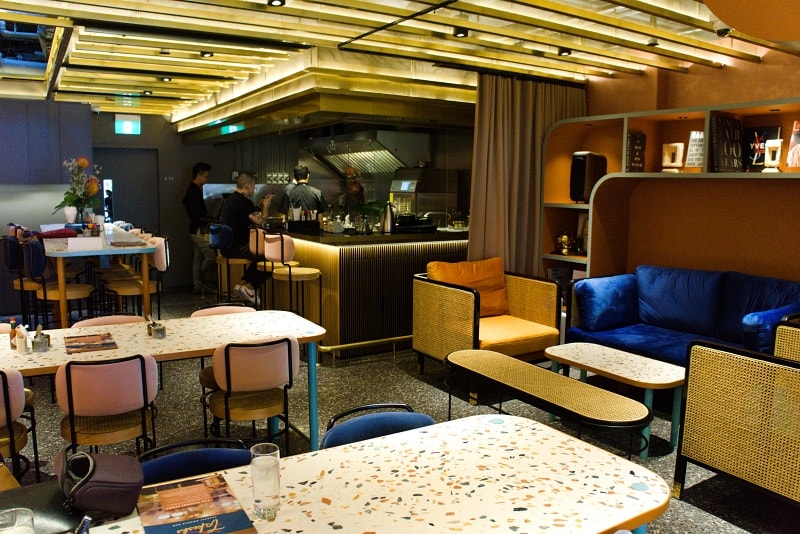 Decked out in what can be best described as “tropical modern artisan furnishing”, the entire space didn’t feel like a typical ramen joint at all. 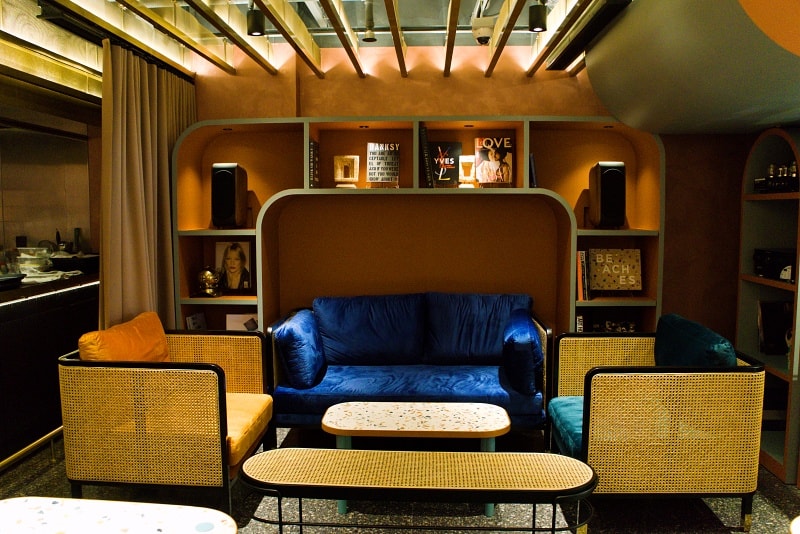 You’ll be drawn to this plush couch area, ideal for a quiet evening of cocktails and conversation. There were even glass tube amps, a Hi-Fi System, and a vinyl turn-table, which gave off laid-back lounge vibes. The polaroid pictures on the illuminated corkboard displays were a nice touch. Hotel Soloha’s reception doubles as a bar, serving up a diverse menu of alcohol and spirits. Head down during Happy Hour from 5pm – 8pm to snag 1-for-1 Asahi Beer.

I settled for a Yuzu Peach Soda (S$7), refreshing and fizzy enough to tide me through the meal. Even the plates our sides arrived on were all about the #aesthetic. I reckon you and your dining partners would’ve snapped about a dozen, if not more, Instagram shots by now. 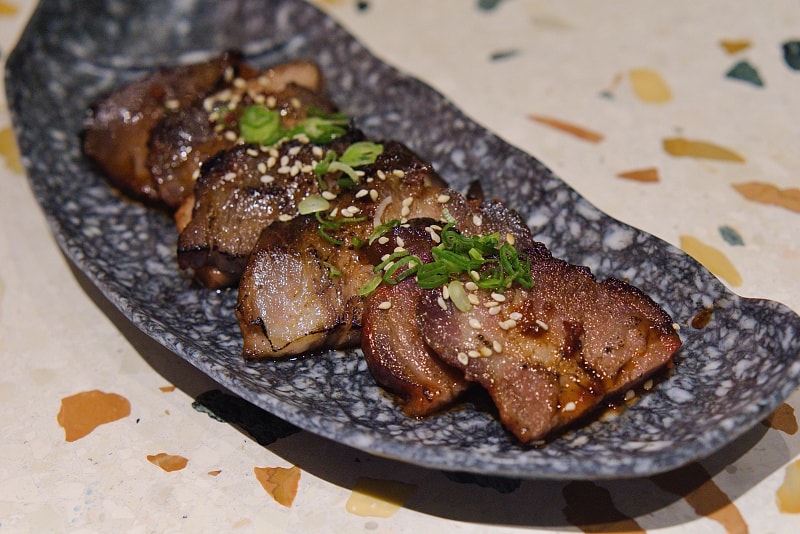 Though on the leaner side, these gorgeously caramelised slices of meaty char siew still sported chunks of juicy, charred fat. 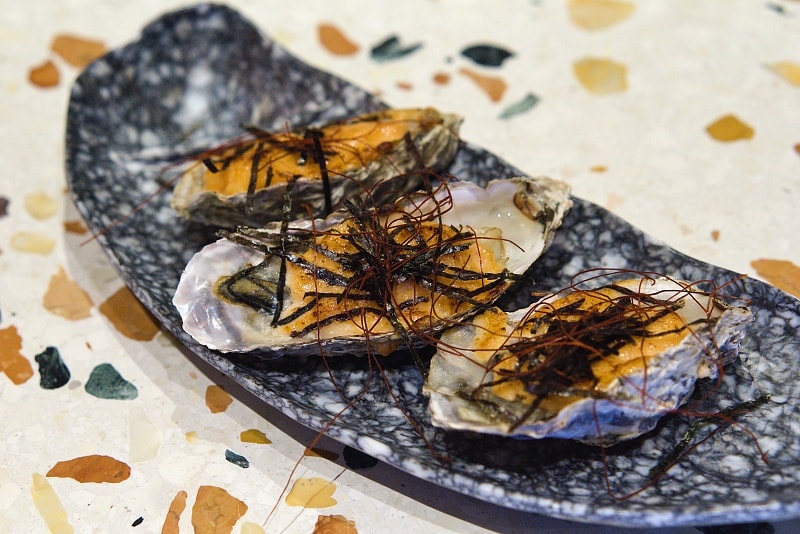 I had my heart set on the Mentaiko Oysters (S$5/pc, S$13 for 3). These briny and plump Sakoshi oysters were topped with torched mentaiko, seaweed, and dried chilli.

As expected, the rich and mildly spicy mentaiko complemented the oysters wonderfully, coming together to produce a gratifyingly creamy mouthfeel.

I must admit, the dried chilli “threads” were a tad bothersome. 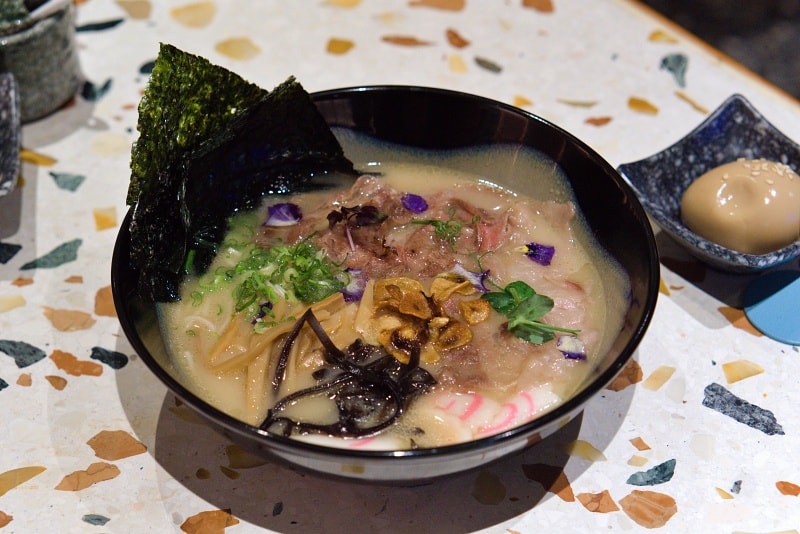 Takeshi’s ramen is prepared using a “rolling boil” technique, in which the broth is boiled rapidly until it starts bubbling vigorously. This brings out the sweetness of kelp and vegetables, the gelatin, fat, and flavour from the bones, and collagen from the skin, cartilage, and tendons.

We first tried the Sliced Wagyu Beef with Truffle Iberico Tonkotsu (S$23.90), served with an ajitsuke tamago on the side. I was instantly hit by the fragrance of truffle, but this thick, cloudy broth was milder than expected. Garnished with menma (bamboo shoot), kikurage (black fungus), hon shimeiji mushrooms, green onion, nori and fried garlic chips, this was one deeply comforting bowl of ramen.

However, those tender, melt-in-your-mouth Miyazaki A5 Wagyu beef slices stole the show. We slurped them up with Takeshi’s signature house noodles.

You can choose the firmness of your noodles (I recommend “hard”) and richness of the tonkotsu broth. 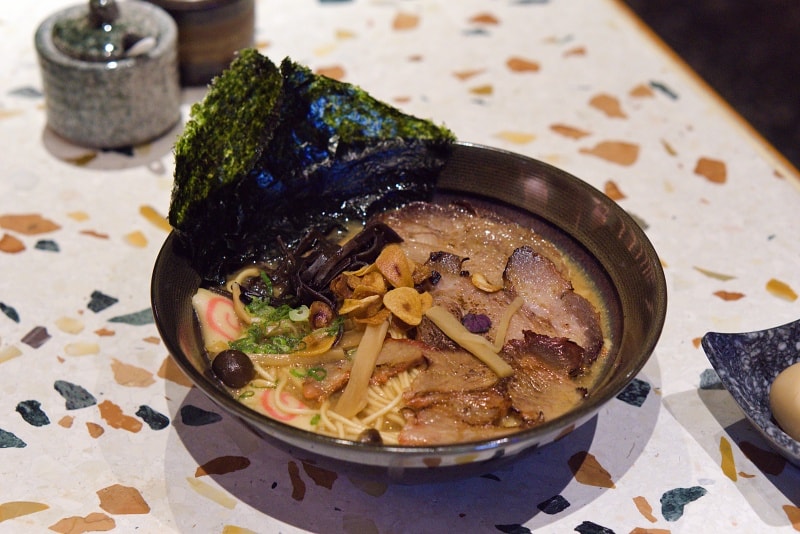 If you prefer heavier-bodied broths, order the Honey Roasted Iberico Pork with Burnt Miso Iberico Tonkotsu (S$15.90), our favourite ramen of the day.

It had all the same accompaniments as the previous bowl, but the burnt miso tonkotsu broth was deep, smoky and downright delicious. 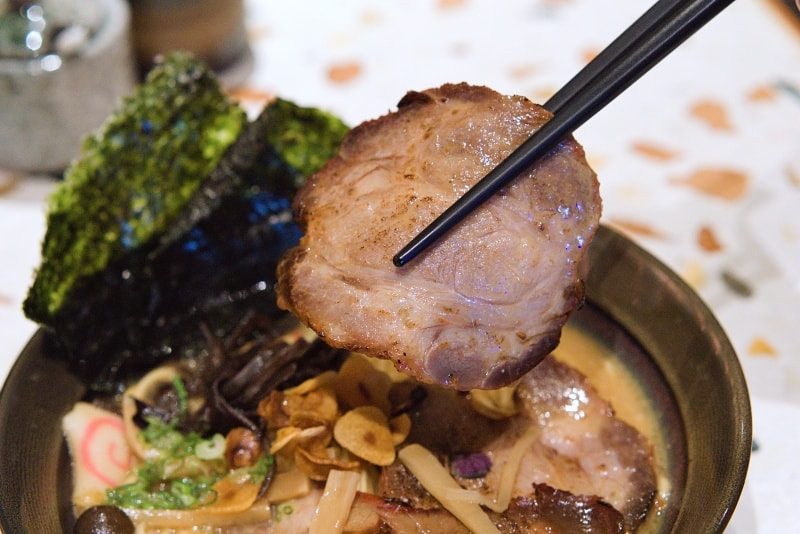 I was grateful for the generous serving of Iberico pork slices, similar in taste to char siew. 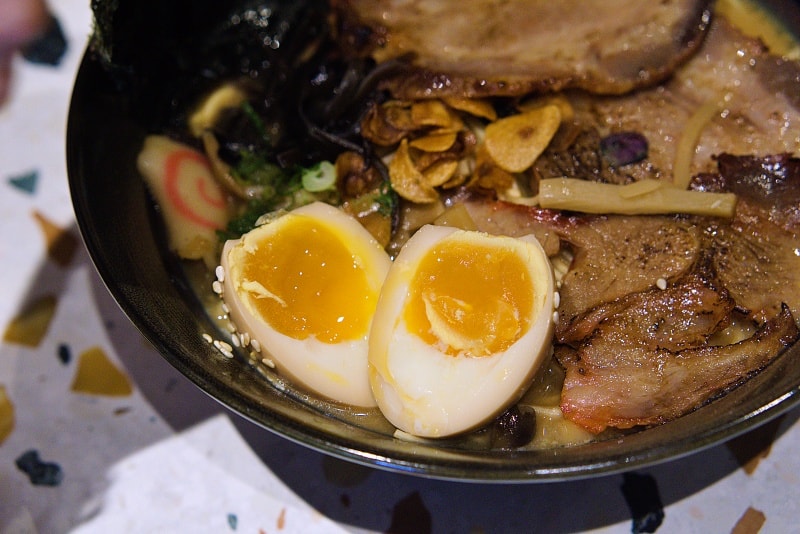 In my opinion, the eggs make or break a bowl of ramen. This savoury and gooey ajitsuke tamago ticked all the right boxes. 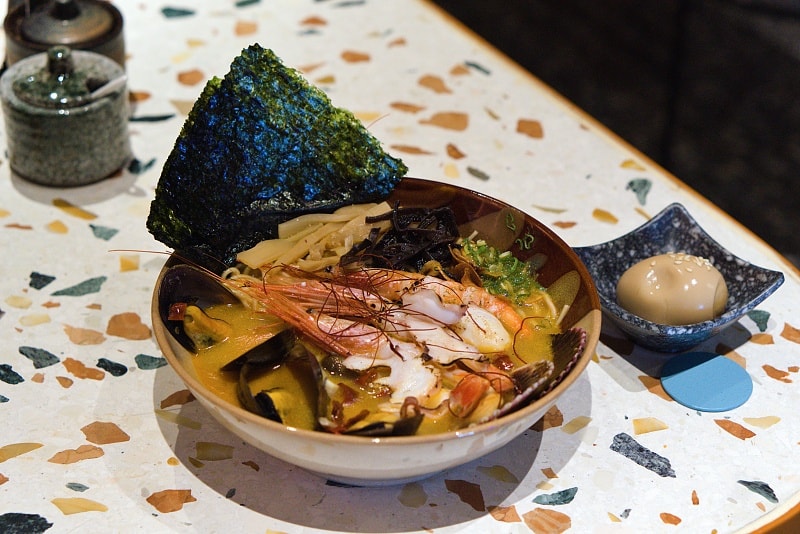 Maybe you’ve seen some renditions of mala ramen elsewhere, but I bet you’ve never come across something like the Seafood Szechuan Mala Iberico Tonkotsu (S$21.90) in Singapore.

Seafood and mala? That’s got to be a heck of a flavour explosion. 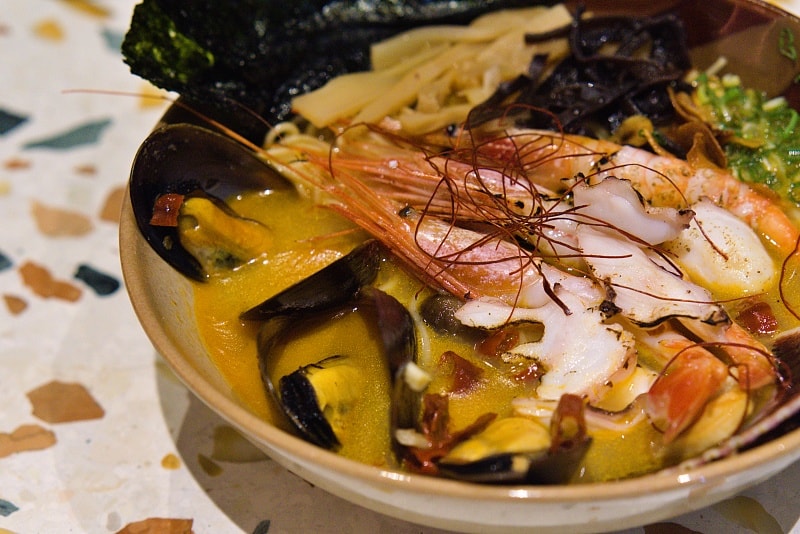 The bowl was chockful of fresh seafood, including mussels, clams, and the BEST amaebi (sweet shrimp), with natural sweetness like no other. Beats regular prawns anytime.

What about the ever-so-important broth? Well, mala fans will not be disappointed. 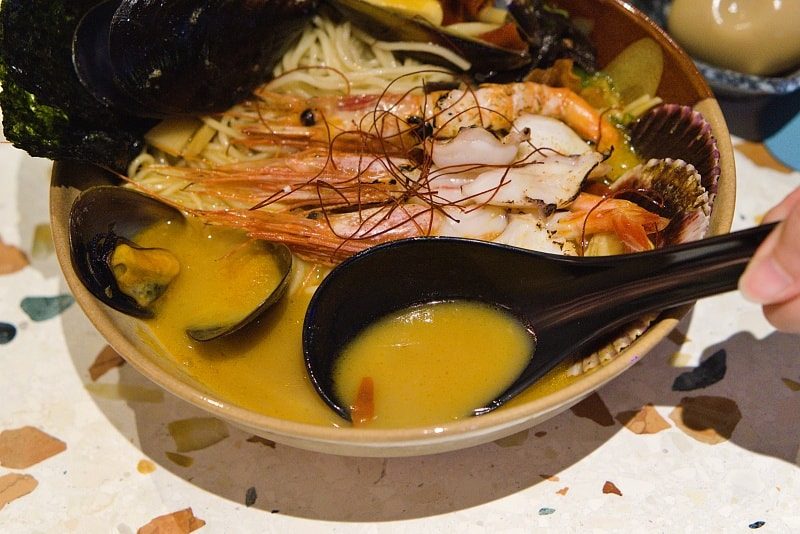 One spoonful was all it took for us to realise how legit the mala spice in the tonkotsu broth tasted. A surge of warmth followed, and the numbing sensation kicked in not long after.

I liked that the broth wasn’t too heavy on the palate (thanks to the seafood!), so I could fully focus on the spice and uncompromised depth of flavour.

Kudos to you if you can finish the entire bowl in one sitting. We (shamefully) conceded defeat after a few bites. 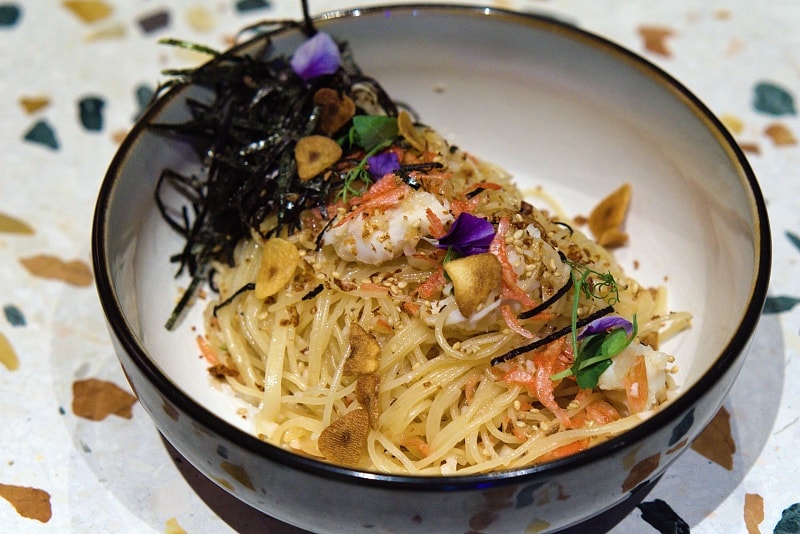 This tame-looking Aglio Olio Angel Hair with Crabmeat Jumbo Lump (S$23) was a lot spicier than expected. We thought it was a chilled pasta dish at first.

I appreciated the fun array of textures from the fresh crab meat, sakura ebi, and garlic chips. Lighter flavours aside, it did contain enough heat to keep us on our toes. The silky strands of pasta weren’t slicked in oil either, and that’s a huge plus. 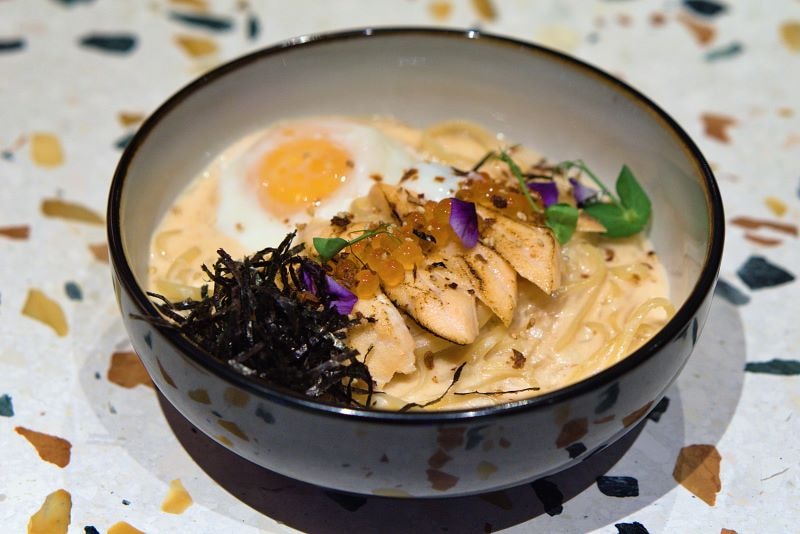 Lastly, we tucked into the Creamy Mentaiko Linguine with Aburi Salmon (S$20).

It wasn’t as fragrant as the Sliced Wagyu Beef with Truffle Iberico Tonkotsu, but there was the distinctive taste of truffle. This already-indulgent dish was even topped with soft, flaky salmon and ikura, and it worked beautifully.

I don’t even like cream-based pasta that much, but somehow I couldn’t stop reaching for more. The pasta was at its peak upon mixing in the onsen tamago. I was amazed by how unexpectedly flavourful it was, with the earthy fragrance of truffle weaving through each perfectly al dente strand of linguine.

Naturally, such a rich and creamy dish tends to get jelak, and hence must be shared.

If you’re looking to linger over bowls of steaming hot ramen and Japanese sake, Takeshi Noodle Bar is the place for you.

Such a prime location (a few shops away from the famous Burnt Ends) is sure to draw in the crowds. It’s guaranteed to be a hot spot, and I’m not just talking about the mala. 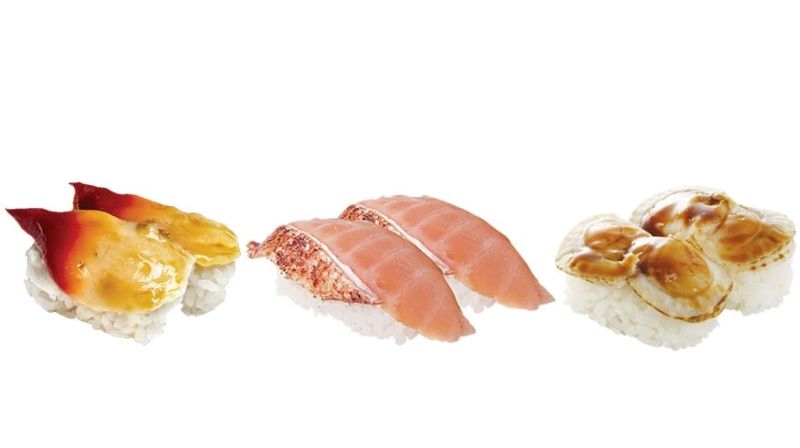