Reminisce the days of homecooked comfort food from your youth? Say no more because The Guild has emerged, responding to your cry for help. 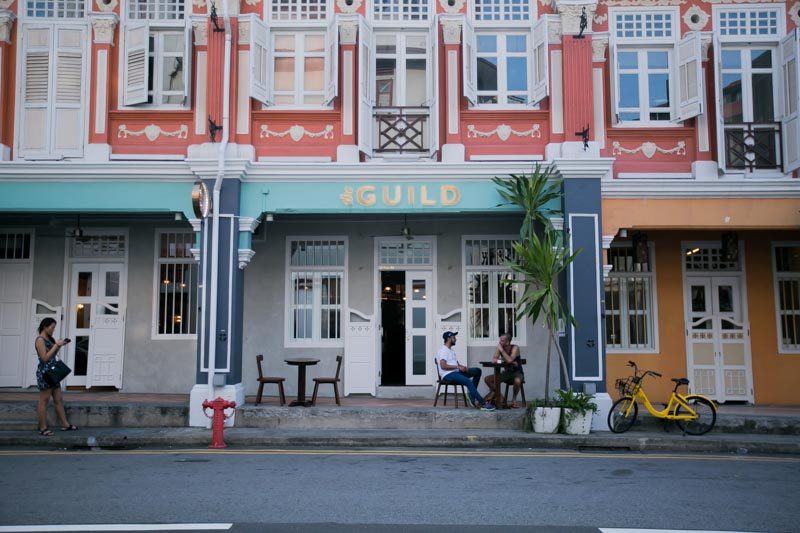 A collaboration between Hong Kong’s Young Master Brewery and Italian-American Chef Vinny saw the creation of The Guild on Keong Saik Road in Outram Park.

Taking up two units of the first level of this row of shophouses, The Guild offers Chef Vinny’s interpretation of European dishes that are inspired by local produce. With 19 beers on tap, it’s just the cherry on top of the array of drink choices that range from cocktails to boilermakers. The circular, open bar concept reflects the interactive drinking scene both Chef Vinny and Young Master Brewery advocate.

The Guild is a bar-restaurant and we started the night with Young Master Brewery’s beers. The Double Leaf ($9) is a kafir lime pale ale, and its citrus notes was a welcome refreshment after the (approximately) ten-minute walk to get here.

The Cha Chaan Teng Gose ($8) is a signature brought to the shores of Singapore from Hong Kong; it’s an alcoholic-rendition of the classic salted lime in 7-up that is commonly found in Hong Kong. The salty and sour notes were a perfect complement to the general bitterness of gose. 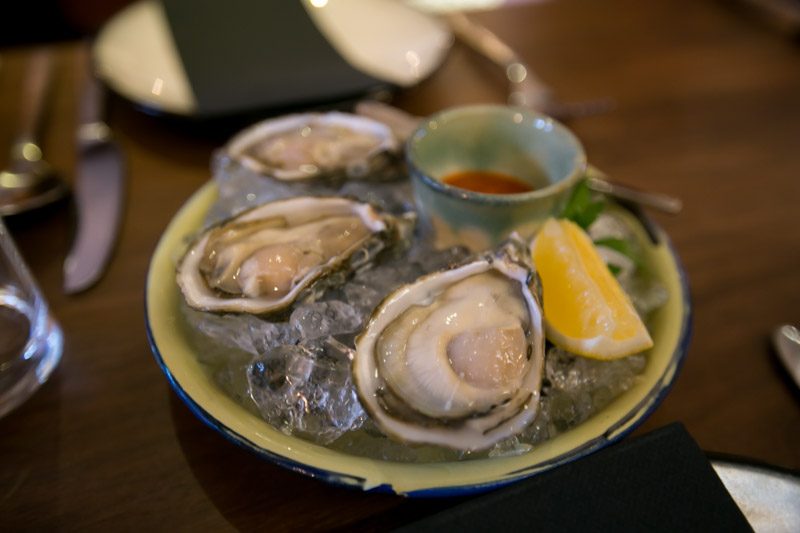 But as every seasoned drinker knows, drinking should not be done on an empty stomach. We ordered oysters because it offers a contrast that highlights both the oysters’ creaminess and the refreshingness of beer.

The Sea Farmer Fresh Oyster — Raw ($6/piece) is farmed locally in Pulau Ubin, ensuring maximum freshness. Served with Chef Vinny’s homemade hot sauce and a dash of lemon juice, the spicy and sour notes were soothed by the creaminess of the oyster. 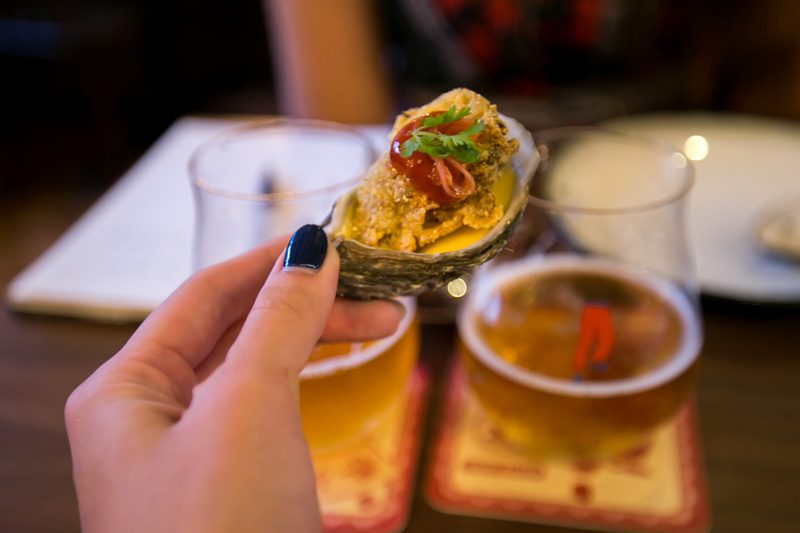 For those who have not learnt the art of appreciating fresh oysters, this one’s for you. The Sea Farmer Fresh Oyster — Fried ($7) is served with hollandaise, chilli and pickled shallots that emphasises the creamy oyster.

Sweet, spicy, sour, creamy and crispy — these flavours masked the briny taste of oysters, making it a quick favourite. 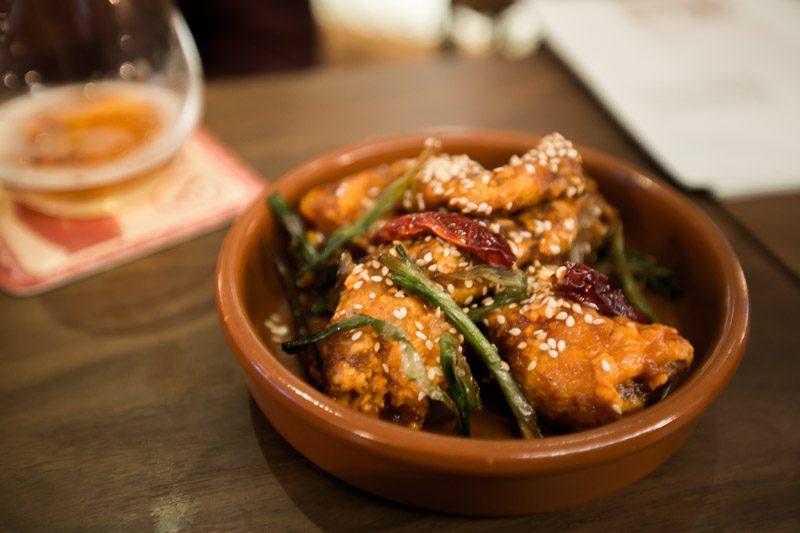 As far as local delicacies go, frog legs are often served alongside a steaming pot of porridge to share. But at The Guild, Chef Vinny has turned them into his local rendition of buffalo wings.

General Tso’s Frog Legs ($14) are fried and coated in a soy-ginger-garlic-chilli concoction, offering a myriad of flavours that made my taste buds do the happy dance.

My only gripe was that the frog legs, having been fried, was a tad overcooked and the texture was closer to the tenderness of chicken (but since it’s a dish inspired by buffalo wings, it somehow worked). Refusing to let the remnants of the frog go to waste, Chef Vinny serves up “Marrow” Bruschetta ($22). Served with an oxtail marmalade and pickled onion atop charred bread. It is unique, to say the least.

Hashima is typically found in desserts, but at The Guild, it is served as a starter. The frog hashima is light on taste and was overpowered by the slightly-too-salty oxtail marmalade. However, it did offer a unique texture that contrasted with the dry toast and salty meat.

When eaten together, the “Marrow” Bruschetta offers both textures and flavours that is an experience not to be missed. 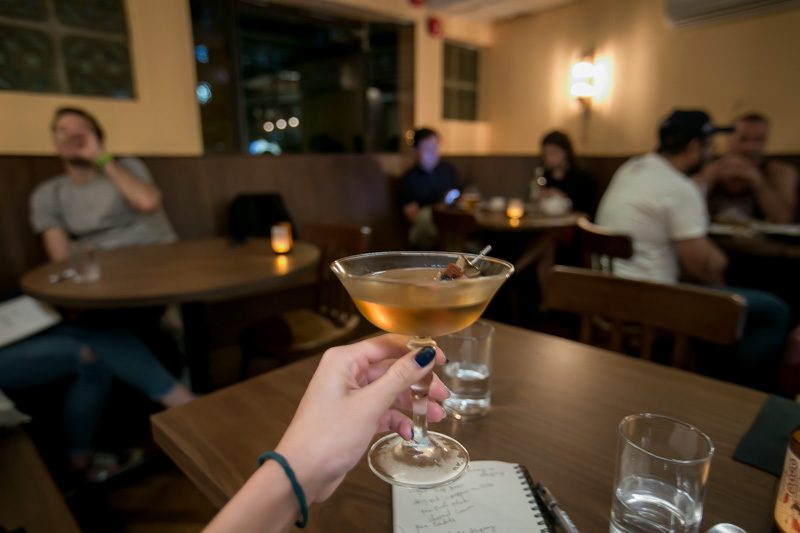 Savoury cocktails — say what?? The Guild’s Umami Gibson ($24) is a combination of black tomato gin, shitake-infused dry vermouth, pickled mushroom brine, and topped with a mini-skewer of pickled mushroom and onion.

The tangy and savoury cocktail brought varied opinions to the table, but one thing’s for sure, it is an acquired taste. Give it a try (or two) before releasing judgment on this unique drink. 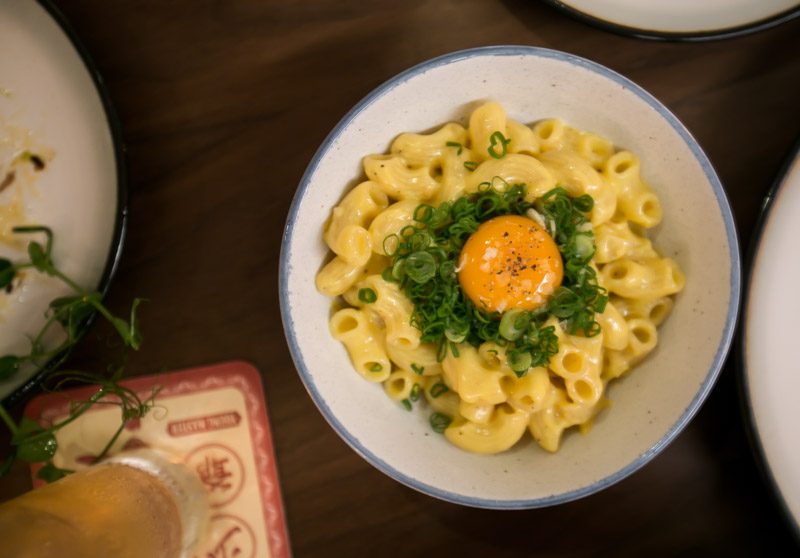 Macaroni and cheese is comfort food at its best. And boy was I happy to see it on the menu at an upscale bar-restaurant like The Guild.

Growing up, macaroni and cheese is a regular dinner dish in my household. Naturally, I had high hopes and The Guild’s Mac n’ Cheese ($18) certainly lived up to my high expectations. The house-cured egg yolk (that is usually found in carbonara) gave an added creaminess and heartiness that left me wanting more, despite being full. 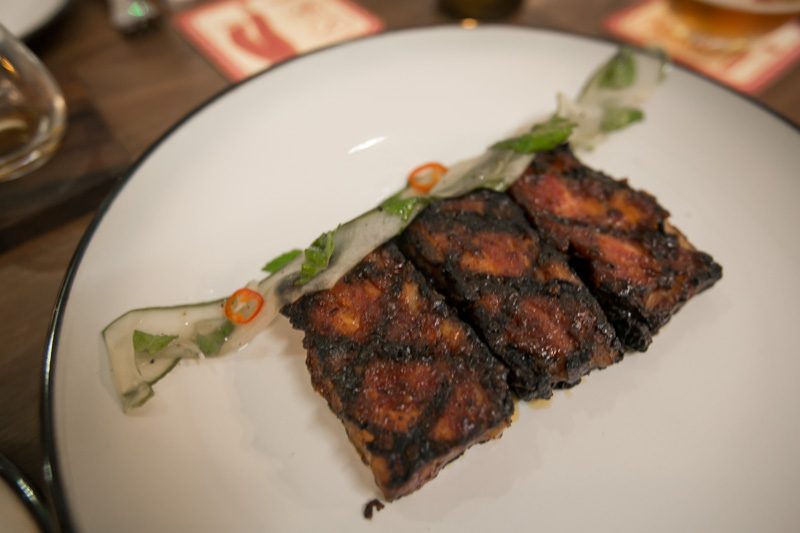 Marinated in maple syrup for two weeks then smoked for six hours, the meat is grilled, giving it an additional char-grill taste on top of the lingering sweetness.

For just $6, you can order this as an add-on to the Mac n’ Cheese, just to get the best of both worlds.

The boilermaker usually starts to appear near the end of the night, so as not to change the taste of the food (and to stay sober, of course). The Rye on Rye ($22) is served together on a wooden tray, featuring Young Master Brewery’s Rye on Wood ($9) and Michter’s single-barrel rye whisky.

While it is tempting to take it as a shot, the Rye on Wood works as a chaser, or you can drink it as you do soju bombs.

The boilermaker (Rye on Rye), was created to be drunk alternating between craft beer or whisky. This changes the flavours of the alcoholic drinks, allowing its distinct notes to spill over into one another. The Guild is definitely an up-and-coming bar restaurant not to miss. With a vast variety of alcoholic beverages and local comfort food-inspired creations by an Italian-American chef, it’s a place to chill out after a long day at work.

With comfort food with a twist that has cheered Singaporeans up since their youth, and a vibrant atmosphere that will pull anyone out of their funk, grab your friends and head on down to The Guild.