There’s been no lack of new cafes popping up in 2019, from Elixir Boutique Roasters to Gather The Misfits and Cheeky All Day.

Adding on to that list is The Kins’, which opened back in July and is tucked away at BIJOU Condo in Pasir Panjang. Despite being hidden away from human traffic, the cafe surprising draws a large office crowd during lunchtime. 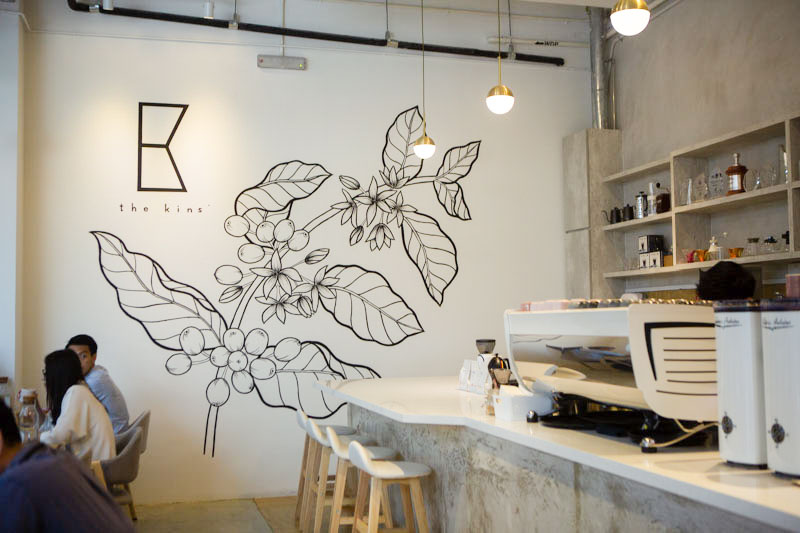 I especially love the Scandinavian-themed interior, which features a mix of wooden and minimalist furniture as well as plant decor. 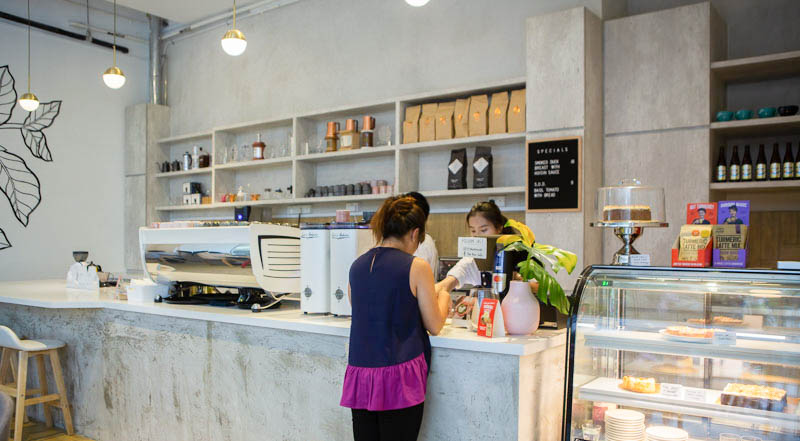 Would the food impress me as much as the cafe’s aesthetic? We ordered their popular Kins’ Burnt Cheesecake (S$9), Kurobuta Pork Soba (S$18), Houjicha Latte (hot, S$6) and Iced White (S$7) to try.

We also tried some new items from their menu, such as their Smoked Duck Breast With Hoisin Sauce (S$18) and Ramen Yakitori Big Salad Bowl (S$16). 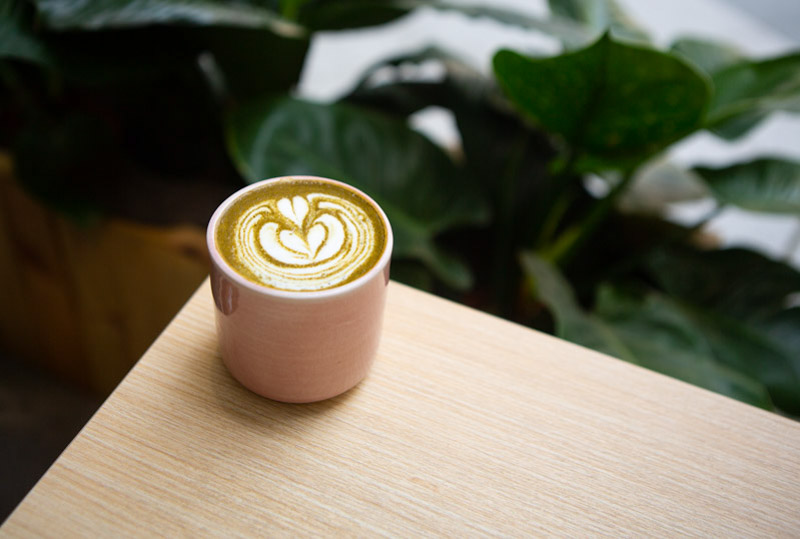 We started off our meal with a hot Houjicha Latte (S$6), which was recommended by the staff.

We thought it had a nice, smooth texture with a hint of matcha taste, sweetness and bitterness. But we did feel like the latte was a bit too thin, and could have used a denser and creamier consistency.

Not a bad palate cleanser though! 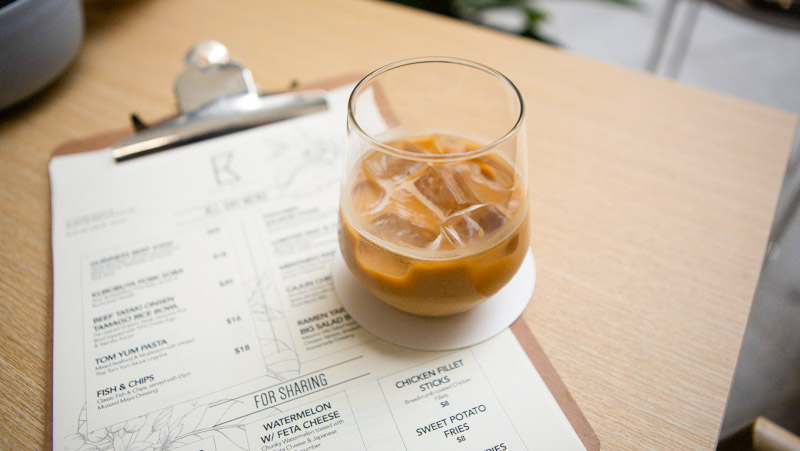 I also felt like the Iced White (S$7) was slightly watered down, and would have been better with a stronger espresso taste. Apart from that, it was still a nice option to get some caffeine in the system. 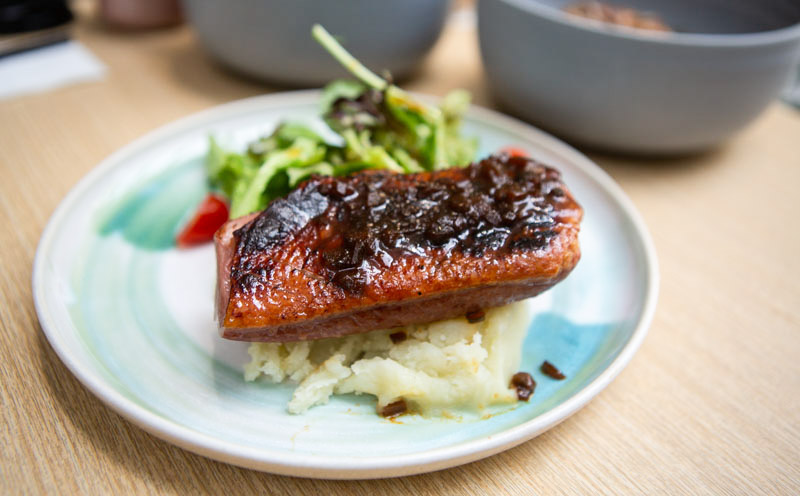 Moving on to the mains, we tried the Smoked Duck Breast With Hoisin Sauce (S$18), which they launched in August. The duck comes in a decent portion, with creamy mashed potatoes and mesclun salad at the side. 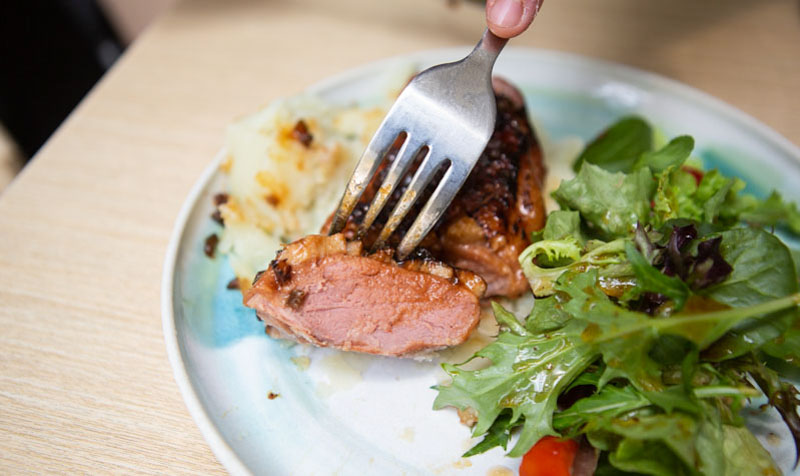 Even though the dish looked promising, we found the meat to be quite rubbery and difficult to cut through. It probably would have helped if it came in slices instead.

I thought the meat had an overly-chewy texture, and would have preferred it to be just a bit more tender. Taste-wise, the saltiness of the meat reminded me of eating prosciutto. 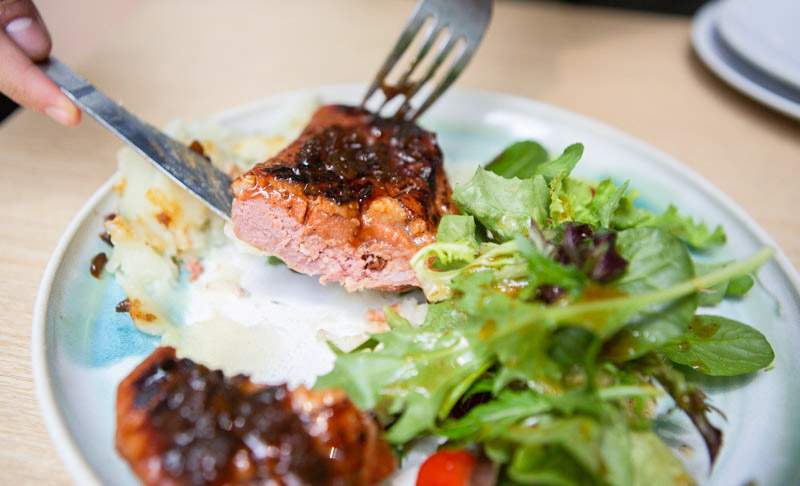 And while the layer of charred skin gave a sweet and smoky flavour to the duck, the fat was too gelatinous. When eaten with the duck meat, it became overly chewy with a rubbery texture.

I was looking forward to the mashed potatoes, but I was disappointed to find that it was crumbly instead of the usual creamy consistency.

Overall, for the price of S$18, I regretfully found the dish to have missed the mark. 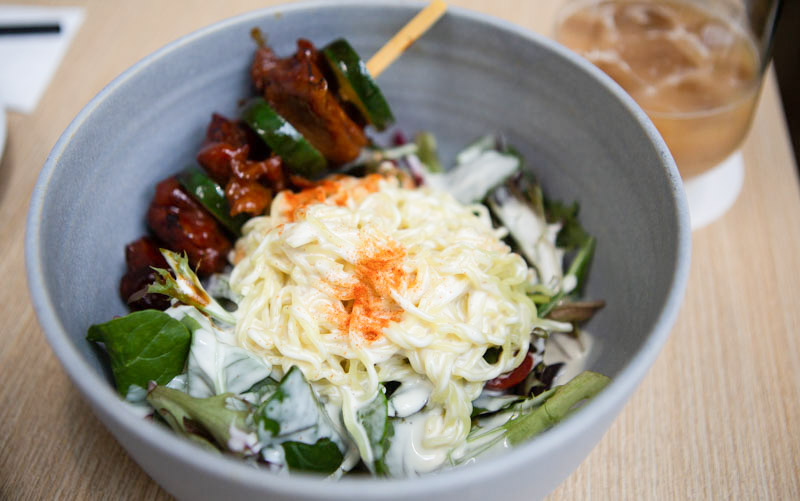 Next up, we went for the “healthier” route and tried their new Ramen Yakitori Big Salad Bowl (S$16). 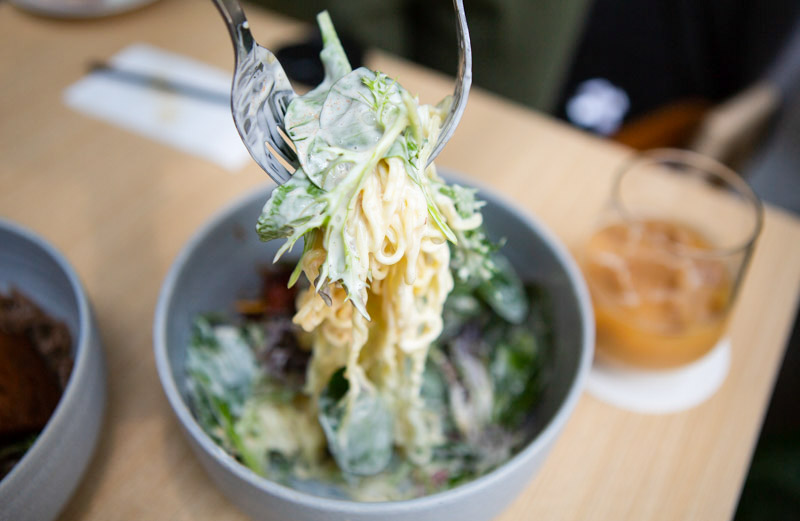 Usually when I have a salad, it’s typically with soba or pasta, so the choice of ramen was new to me. The noodles were springy, and when coated with the egg mayonnaise sauce made it great for slurping up.

However, it can get jelak after a while, so perhaps having less sauce or more ingredients to balance it out would have been good. 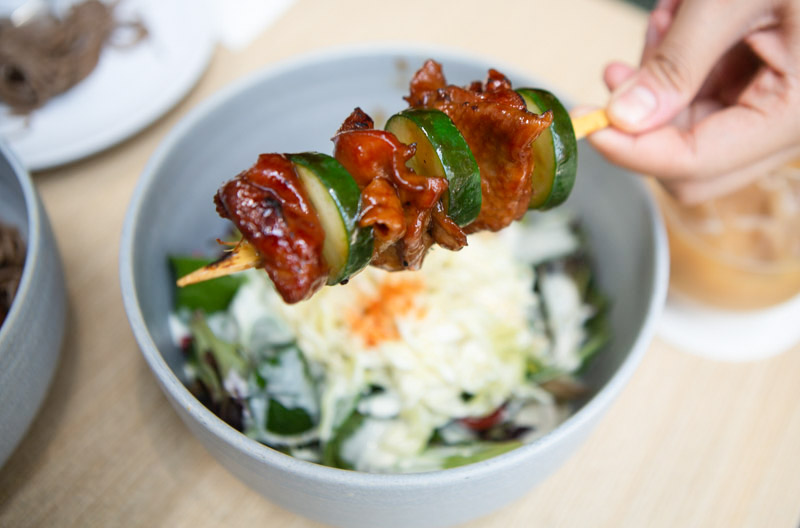 The yakitori was pretty huge, which I appreciated. I thought the chicken was meaty and tender, and the teriyaki sauce gave it a honey-like sweetness, with a hint of saltiness from the soy sauce used. I thought the cucumber also added a nice crunch and refreshing taste.

While the different components of the dish tasted great on their own, I thought that the yakitori was slightly out of place, since I am used to eating it with rice. The creaminess of the egg mayonnaise combined with the thick teriyaki sauce also resulted in too much greasiness on the palate.

I think keeping it simple with one type of sauce would be better, and having a protein with a dryer consistency like roasted chicken could complement the sauce well. 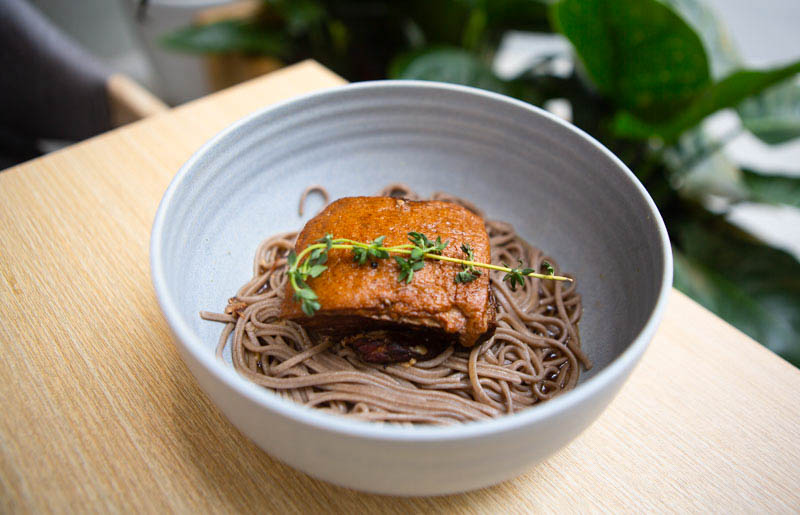 Even though we were excited to try some of their new brunch items, they are only available on the weekends. So, we settled for one of their usual mains, the Kurobuta Pork Soba (S$18). 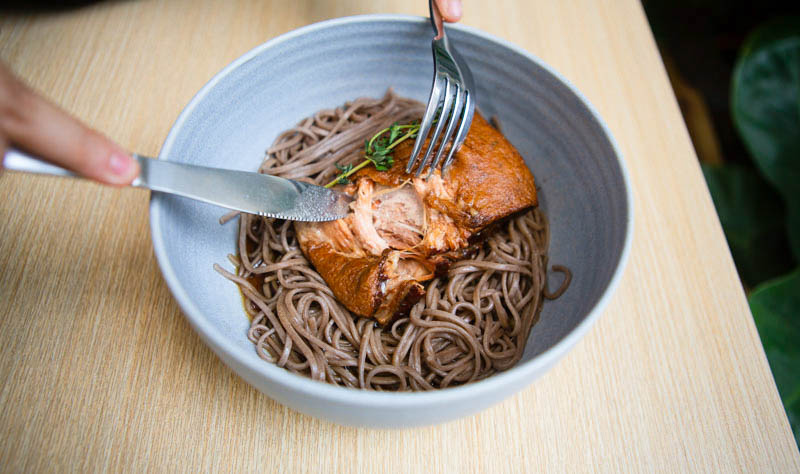 The dish looked and smelled appetising, so I was a little disappointed when I realised the pork was a bit tough. It still broke apart pretty easily though, and had a nice soy sauce and herb flavour. 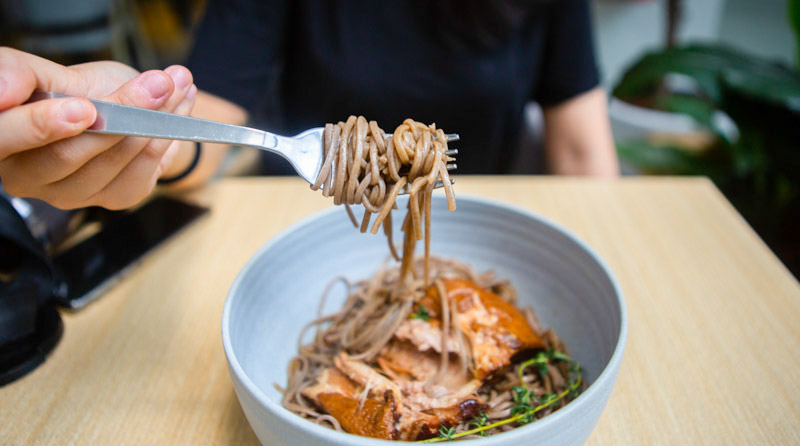 The soba was smooth and chewy, and absorbed the flavour of the herbs used. Though a slightly unusual combination, I thought the soba and pork paired well with each other. I also liked how it was a simple dish without being overcrowded by sides.

Out of all the three mains, I preferred the Kurobuta Pork Soba (S$18). We rounded up our meal with the crowd-favourite Kins’ Burnt Cheesecake (S$9).

With the first bite, I can understand why this cheesecake is so popular. The layer of mousse melted in my mouth, while the fluffy cake texture was light and airy. 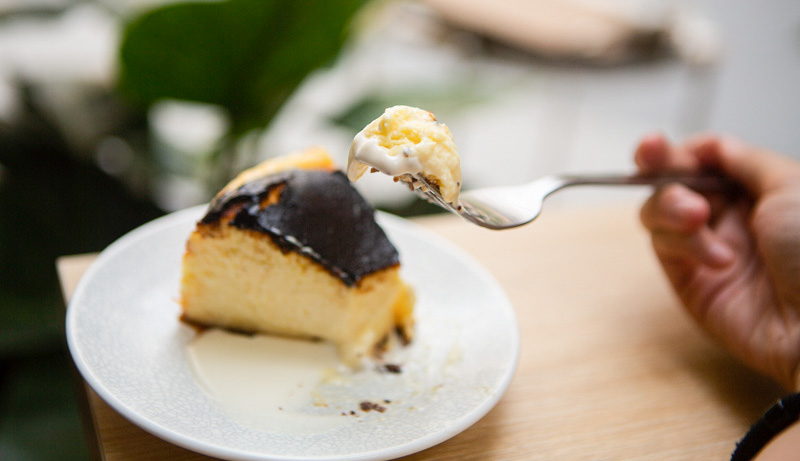 In contrast with the rich sweetness from the cheesecake, the burnt top layer and base adds a unique element of smokiness. There is also a side of sauce made of whipping cream and sugar, which gives an extra smooth and milky-sweetness to the cake.

I also enjoyed how the back layer of the cake reminded me of biting into the buttery crust from egg tarts.

Overall, this is a unique twist on the classic cheesecake that is good for sharing with a friend.

My closing thoughts? The smoked duck and ramen yakitori salad did not fare as well as I thought they would, which was a little disappointing, considering they were both fairly pricey.

Perhaps simpler dishes like their Fish & Chips (S$18) and Cajun Chicken (S$16) might be safer options. It also seems like their brunch menu is pretty popular, and would probably be more worth it.

While the only box that was ticked for me was the aesthetic of the cafe, I think it is a tranquil and cosy space to chill at and have some cheesecake or coffee with some friends.