The Lobby Lounge: Try All 7 Iconic Hawker Dishes At This Semi-Buffet In Shangri-La Hotel Singapore 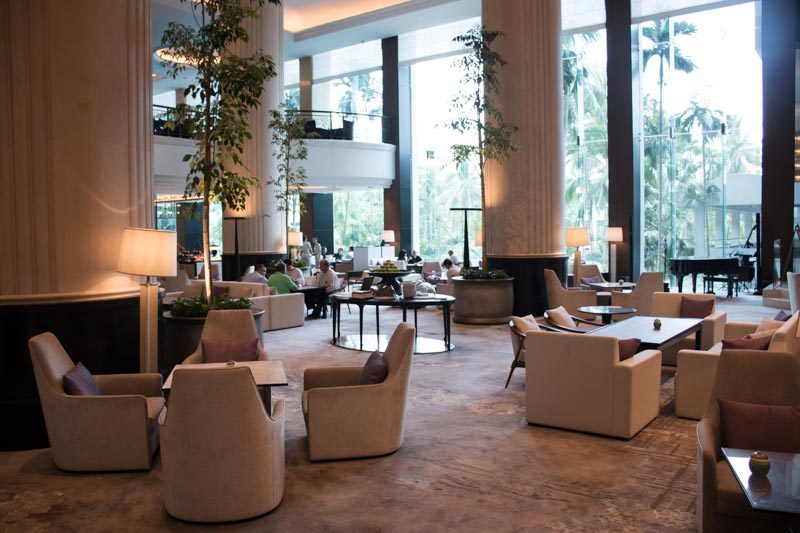 Let’s face it, we’ve all had times when we disagree on what to get for lunch or dinner. The Lobby Lounge at Shangri-La Hotel Singapore has a semi-buffet lunch, which will take that burden off your shoulders. 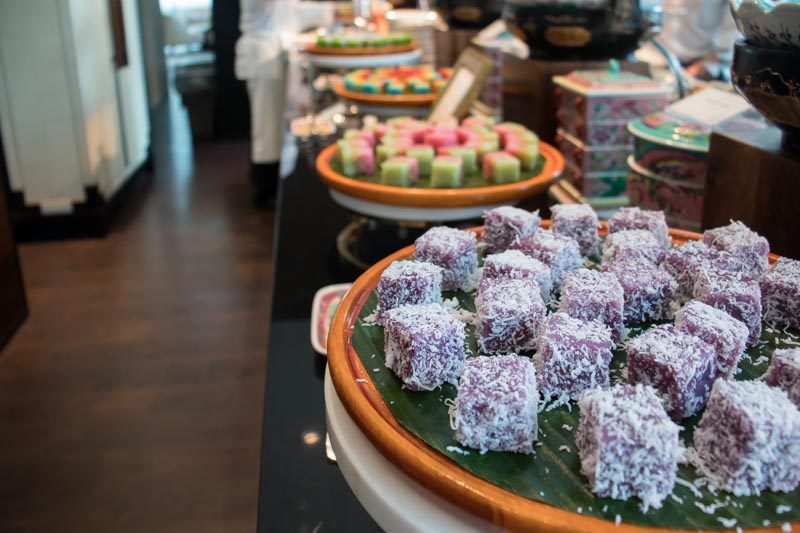 Since late 2017, The Lobby Lounge has been featuring seven iconic hawker dishes in its semi-buffet lineup. In addition to these seven dishes, there’s also a live Popiah and Kueh Pie Tee station, and a spread of HarriAnns Nonya Kueh and Pulut Hitam. 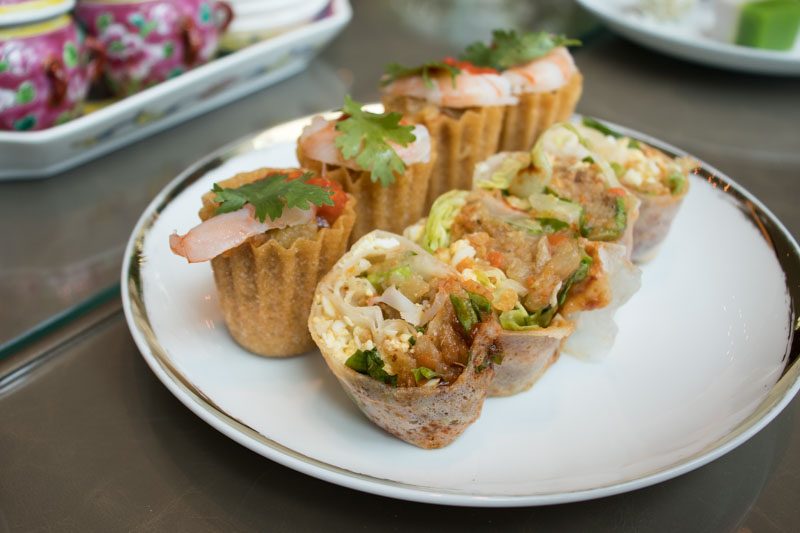 Although the buffet spread alone is amazing, the live Popiah and Kueh Pie Tee station add that extra something to the mix.

You’ll get to enjoy them piping hot, accompanied by The Lobby Lounge’s tangy and potent chilli sauce that will have you going for seconds. The first of the seven legendary dishes is Bak Kut Teh by Legendary Bak Kut Teh.

The famous bak kut teh is served over a tea light, which will keep your soup warm as you help yourself to the other buffet offerings. 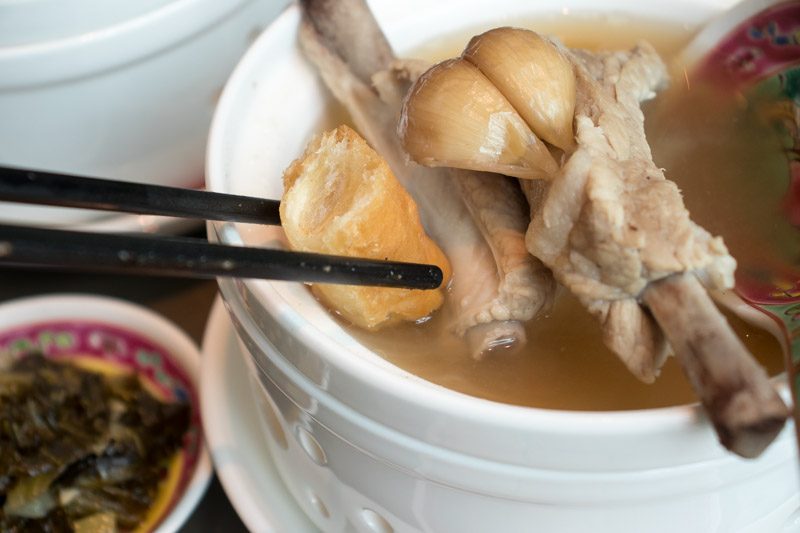 You’ll also get two pieces of you tiao to accompany the delightfully peppery soup. The best part of the dish was that the pork ribs were so tender, the meat just fell off the bone. 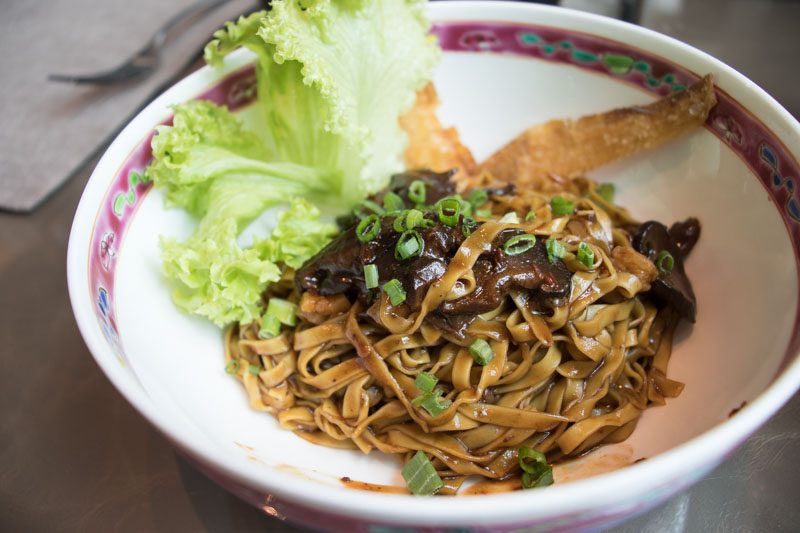 Another dish you can get is the Bak Chor Mee with Fish Maw Soup by Seng Kee Mushroom Minced Meat Noodle.

This really isn’t your regular Bak Chor Mee, it has been given an atas makeover with the accompanying fish maw soup.

The bowl of noodles you get is pretty basic, with perfectly cooked mee pok tossed in a savoury chilli and mushroom sauce, and topped with mushrooms braised for over four hours. 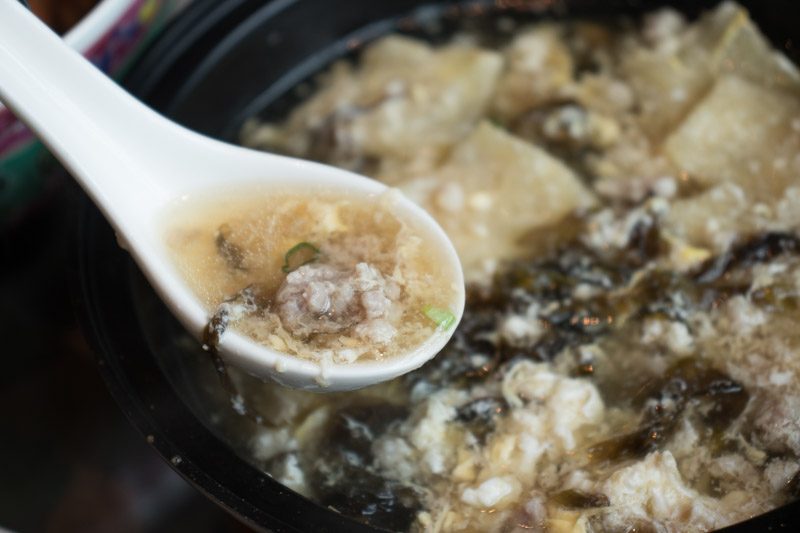 At first glance, I thought the name was a little misleading because the noodles had no minced meat in it. It was only after stirring the soup I realised the bak chor was littered throughout the thick soup.

In addition to the tender meat, the soup also had a generous portion of fish maw and seaweed. The combination of the chewy noodles and the rich broth made for a really comforting bite. 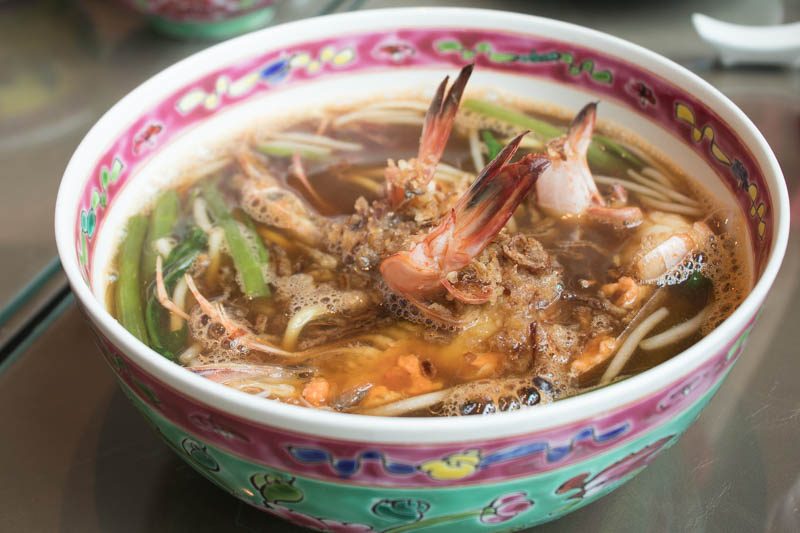 If Bak Chor Mee isn’t your thing, you can also get Prawn Noodle Soup from Beach Road Prawn Mee. It comes with two fresh prawns, and a substantial portion of yellow noodles. 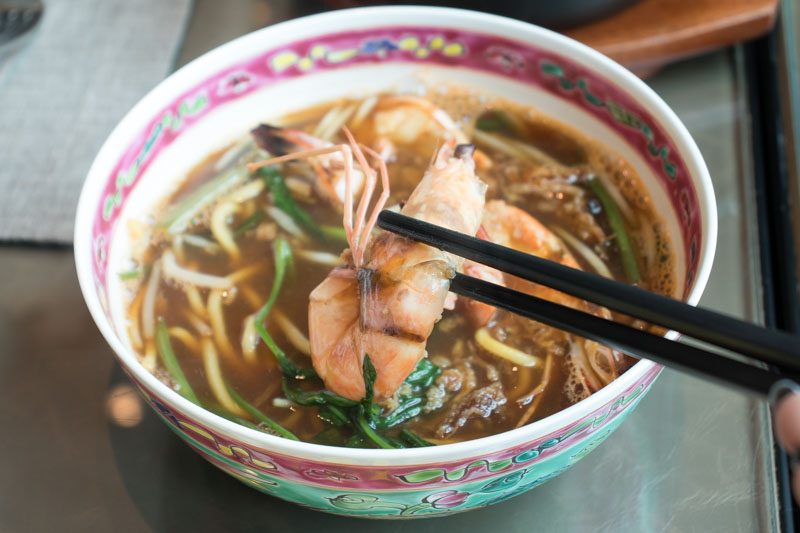 The rich prawn broth will have you slurping it up till the last drop. It’s subtly sweet and was packed with the flavour of prawns extracted through the boiling process. I was pretty bummed to find out that the prawn noodle only comes with yellow noodles, and would have liked it better if we could choose the types of noodles to have.

However, the yellow noodles were cooked in such a way that there wasn’t the alkali taste, so there wasn’t much to complain about. At the Lobby Lounge, you’ll get to try the Katong Laksa by The Original Katong Laksa (Janggut). Although you don’t get the full authentic noodle experience because of the difference in ambience, the taste of this Laksa will still instil a sense of nostalgia in you. 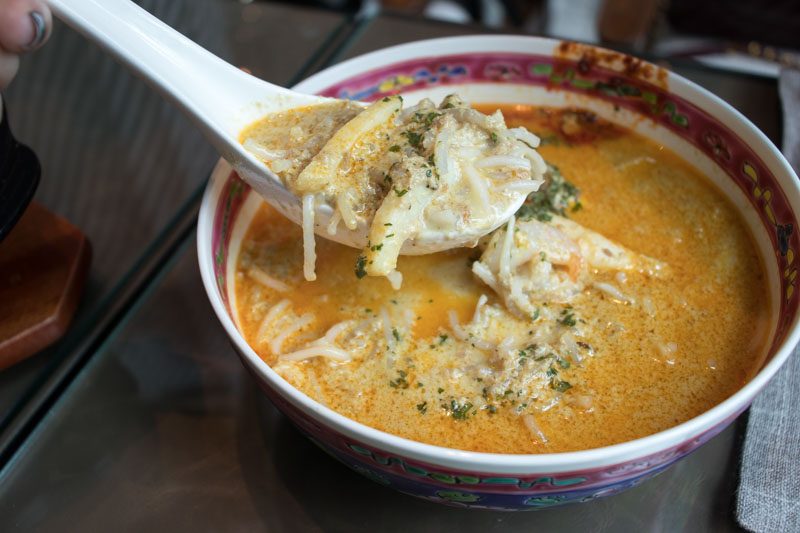 The laksa broth was thick, creamy, and had a prominent seafood flavour which is often missing from other laksa gravies.

It was also pretty mild compared to others in terms of spice. There was a generous portion of ingredients in the laksa, such as prawns, cockles, fishcake, and the usual suspects. 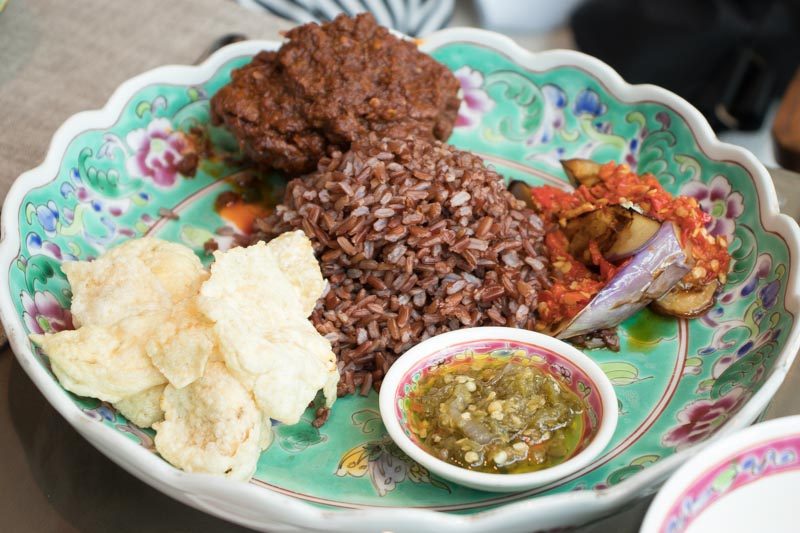 If laksa isn’t enough to curb your cravings for spicy food, you can opt for the Beef Rendang by Rumah Makan Minang.

The Lobby Lounge gets its Beef Rendang fresh from the Indonesian Minangkabau specialist, so you know you’re getting the real deal. The beef had a little bite to it, as authentic Rendang should. It was also very well-seasoned, with the spices penetrating deep into the meat.

The flavour of this rendang was complex, with hints of ginger and coconut milk shining through the gravy, which covers all bases in terms of its flavour — a little sweet, a little salty, and a whole lot of spicy.

Accompanying the beef was brown rice, shocking I know. However, the brown rice serves as a great carb to accompany the strong flavours of the beef. The highlight for me was probably the Chilli Crab and Mantou by Dragon Phoenix. Instead of using Sri Lankan crabs, they take it a step further and use Alaskan crabs in the dish.

The Alaskan crabs had sweeter, more delicate tasting flesh as compared to the Sri Lankan crabs which helped to make this dish a lot lighter.

I liked that the sauce wasn’t too watery, or sweet. It was also had a slight spicy kick to it. You could just tell that a lot of effort went into the making of this sauce, as it was very well-balanced and didn’t overpower the flavour of the crab meat. 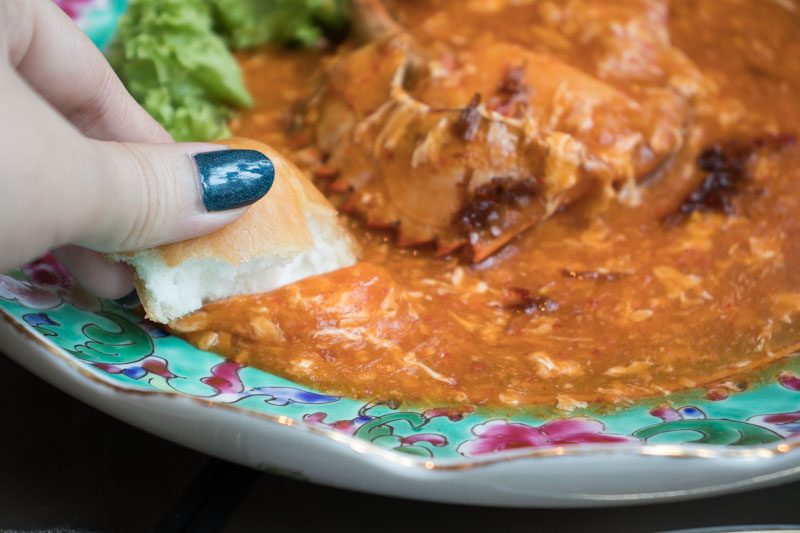 Best of all, the crab came with three pieces of fried Mantou to mop up the gravy and remained crisps on the outside even after spending some time being dipped in the sauce. 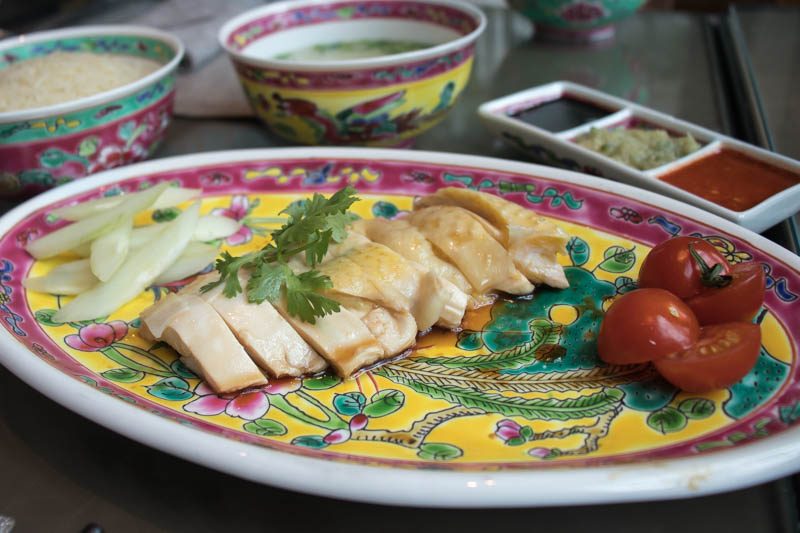 If we’re talking about Singaporean classics, we can’t miss out on Hainanese Chicken Rice, can we? The Chicken Rice from Shangri La Hotel itself features tender chicken, fragrant rice, and a trio of sauces. 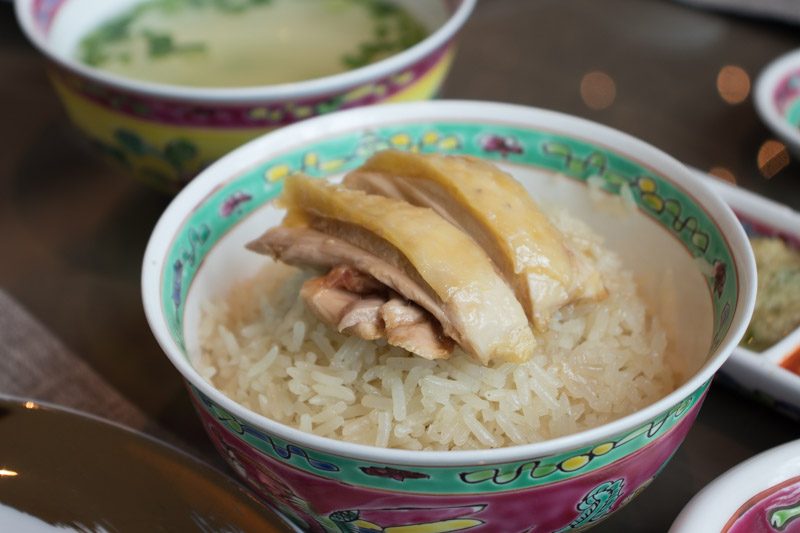 Mix the chilli, dark soy sauce, and ginger sauce in your rice to taste and you’re good to go. There isn’t anything special about this particular chicken rice, but it’s just an option if you’re looking for a good plate of chicken rice.

The semi-buffet at The Lobby Lounge gives you the chance to try all these iconic Singaporean favourites in one sitting.

Even better, you can skip all the queues and enjoy them in a comfortable setting. So if you ever find yourself facing the age-old dilemma, head down to Shangri-La Hotel Singapore because you wouldn’t have to make that decision.

Previous articleFusion Spoon: Fuel Up & Take A Bingsu Break For Only $7.30 In Singapore Botanic Gardens
Next article10 Mala Dishes In Singapore Besides Mala Xiang Guo To Get You Fired Up