The Amoy Street area is well known for cafes and upscale eateries, and WANTON Seng’s Noodle Bar fits right in.

Situated along a quaint row of shophouses, it has made a name for itself over the last few years. Its bold, modern take on the humble wonton mee is breathing new life into the original Seng’s Wanton Noodles found at Dunman Food Centre. 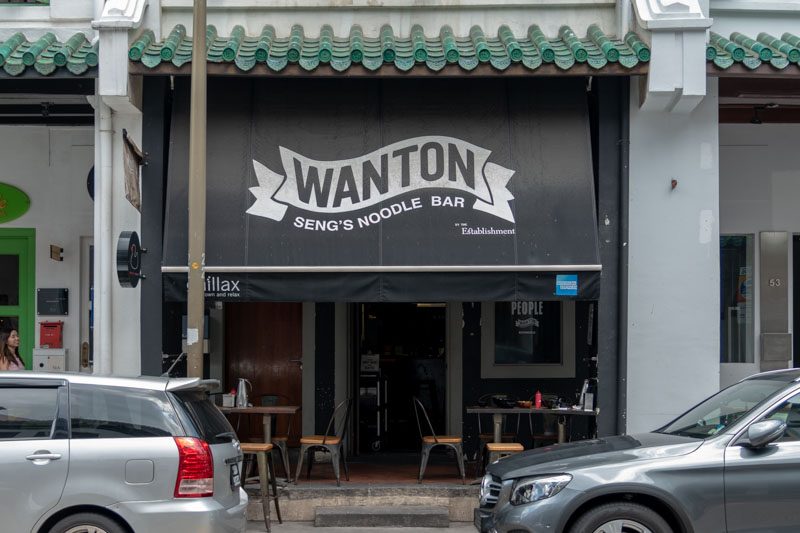 The interior follows a clean, minimal style just like the exterior. An open noodle bar dominates the space, so I could interact with the chefs as they prepared my meal. With the calming jazz music playing in the background, it was a very homely, laid-back environment, but admittedly a little cramped.

The lunch menu is a pared-down affair with bowls for dining alone, while the dinner menu allows you to order premium sides to complement your noodles, cai-png style. Perfect for after-work gatherings, where you can share dishes with your friends! WANTON Seng’s Noodle Bar prides itself on its Char Siu Noodle (S$7.50), that features slow-cooked pork belly in place of the standard hawker char siew. The pork belly looked really appetising with its glazed and charred exterior which provided some smokiness. Unfortunately, it was tougher and drier than expected for slow-cooked pork belly. Even the fatty bits regrettably did not melt in my mouth. 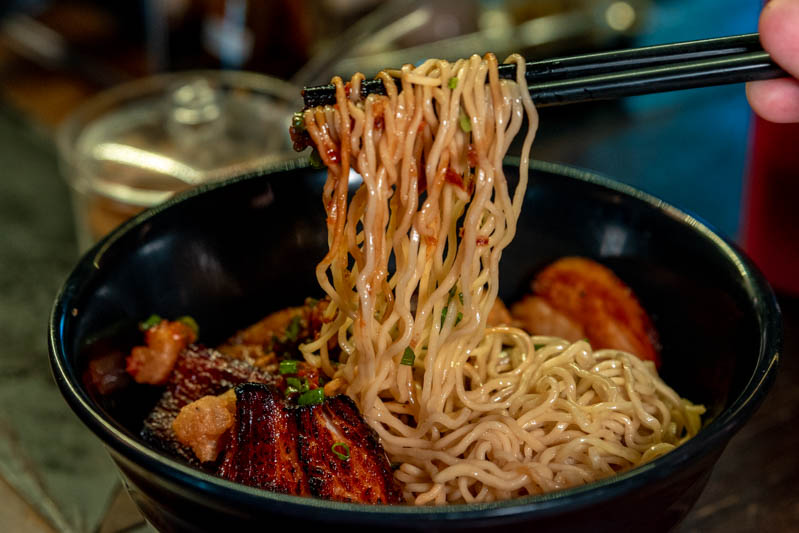 The noodles were firm rather than springy, with a slightly alkaline bite. Their signature soy and pork lard blend was slightly salty, and featured small bits of fried shallots.

The shallot oil gave it nice subtle aroma, and I enjoyed the still crackling, crispy pork lard that broke the smooth monotony of the noodles. 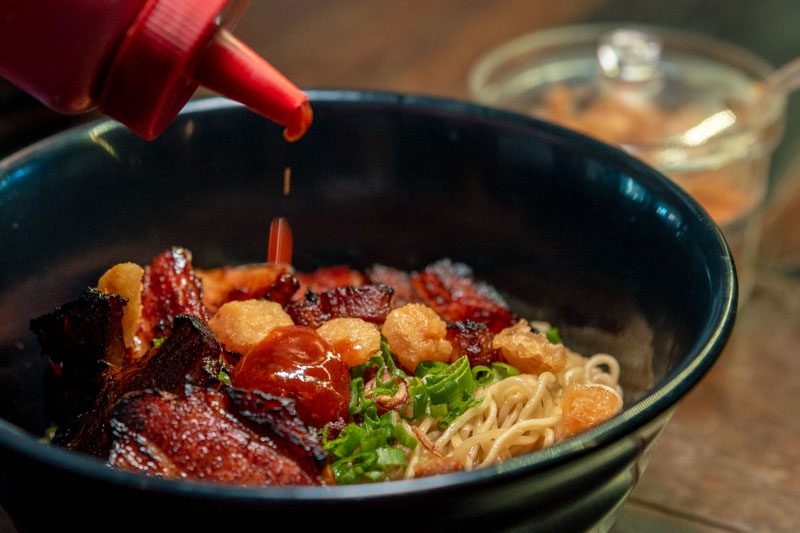 Definitely pair your noodles with their signature chilli! The sweet and mildly spicy sauce goes well with everything, and was something I simply could not get enough of. We also had the Balinese Duck Noodle (S$12.50) which featured the same noodles but had a huge fried duck thigh. I was rather impressed with the size of the duck, as well as the skin which was fried to a deep golden-brown, and remained crispy and crunchy. The duck meat was deep and intensely flavourful, with a sweet, mellow aftertaste that lingered in my mouth. However, it was a little too dry for my liking. 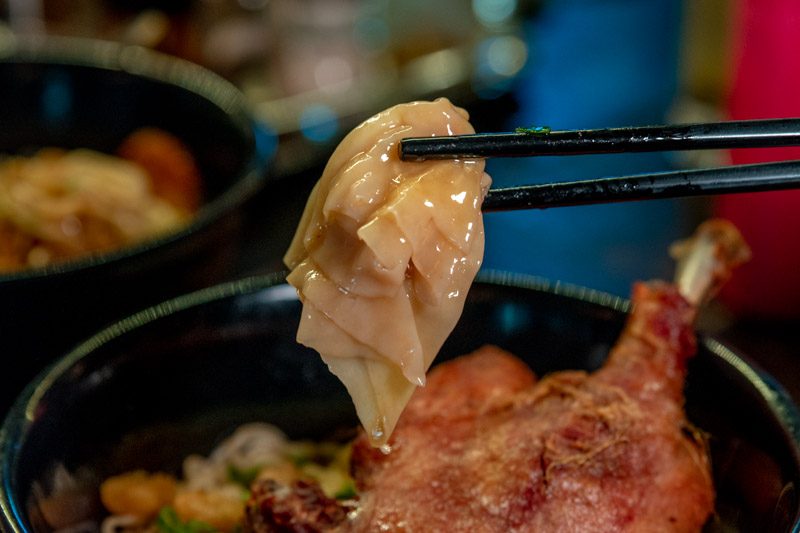 All the dishes we had came with boiled wontons which I really enjoyed. Small and juicy, they were miniature flavour bombs that added a little surprise and variation to the entire dish. I’ve heard a lot about the Fried Wontons (S$6/9pcs, S$8/18pcs). They were served piping hot, but the characteristic minced pork and chives aroma were barely perceptible. 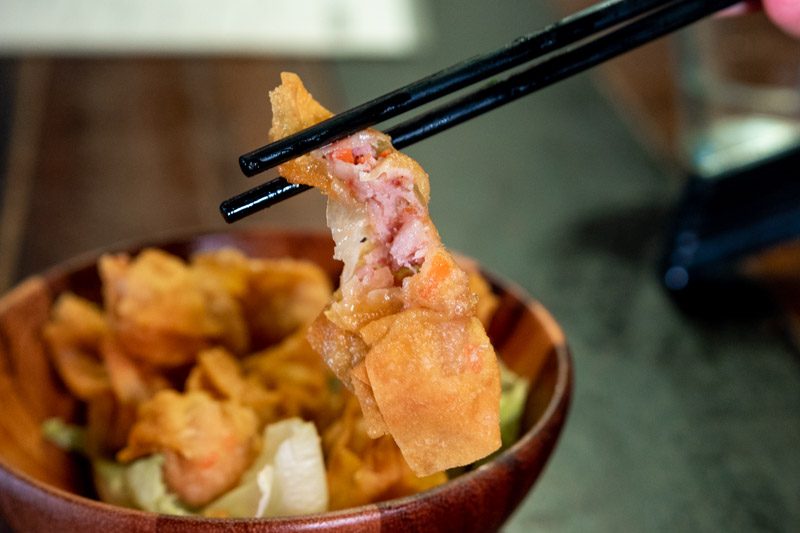 I felt that the meat-to-wonton-skin ratio was a bit skewed — the little morsels of meat were overly salty and I could also taste the preservatives. It felt like the wontons were nothing more than one-dimensional, salty and crispy skins.

I honestly expected a bit more from a place that has the word “wanton” in its name. However, the boiled wontons are definitely one of the better ones I’ve had in Singapore, so give them a try. Dishes at WANTON Seng’s Noodle Bar also come with free-flow broth and pork lard. With most wonton mee places giving either too much or too little pork lard, I really liked this touch as it allowed me to control how much I wanted to put in.

The broth was deceptively clear, with a light corn scent. However, even the tiniest sip was bursting with umami flavour.

Boiled over the course of an entire day, the sweetness from chicken and pork bones become infused with saltiness from anchovies and a dash of MSG. I could really taste the love and effort put into the broth. It’s definitely one of the bigger draws to come by WANTON Seng’s Noodle Bar.

WANTON Seng’s Noodle promised a modern and refreshing take on a local favourite. I really appreciated how the noodles were seasoned lightly, so I could add condiments like light and dark soy sauce, green chilli, pork lard as well as Seng’s signature chilli blend to my liking.

Definitely try the boiled wontons and enjoy the free flow of flavourful broth when you come down. However, you might leave a little disappointed if you expect to get bang for your buck — I personally do not feel that the quality of food warrants the higher price tag.