Let me preface this by saying that I take my prawn noodles seriously. I always tell my friends that no prawn noodles can rival those of your grandmother or mother. There have been a few that have come pretty close, with 545 Whampoa Prawn Noodles being one on my list of excellent prawn noodles.

With that in mind, I was definitely excited to try what Zhenjie Seafood had to offer. 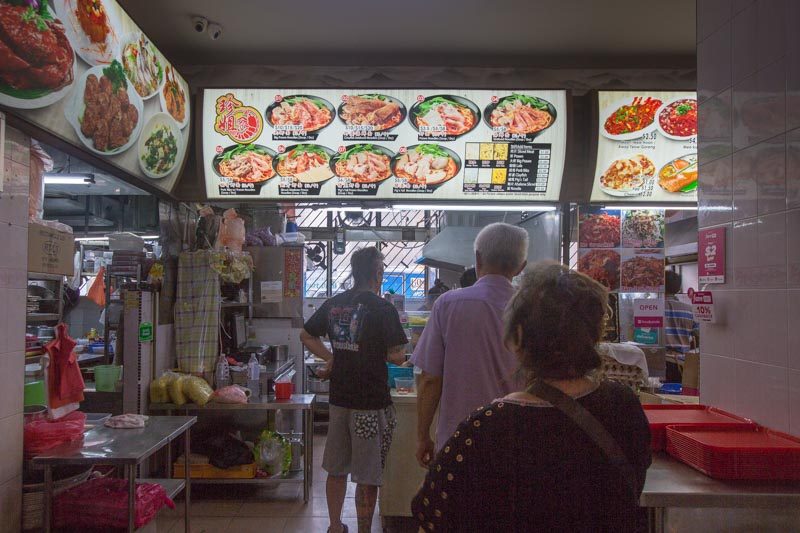 When I walked up to Zhenjie Seafood, it looked like any run-of-the-mill prawn noodle stall but with a steady queue forming in front of it. 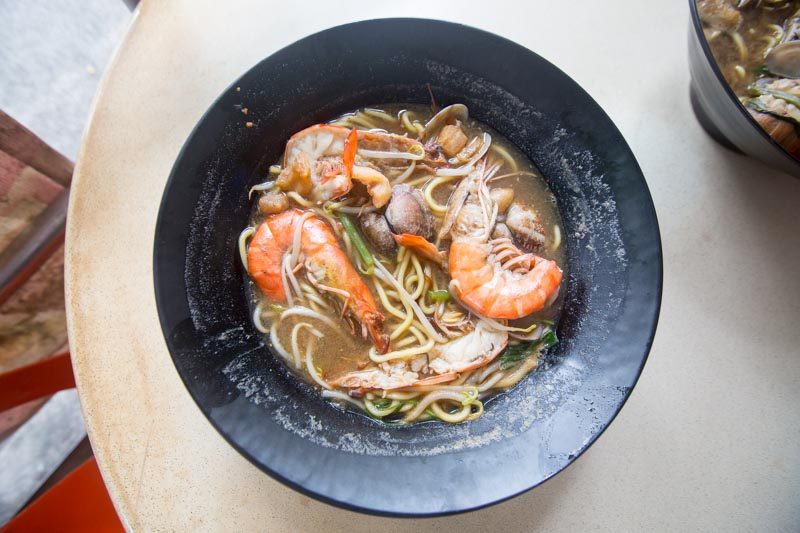 I started with the Seafood Noodles (S$5/S$8) which was your basic prawn noodles but with the addition of clams. The bowl came with a generous portion of prawns, conveniently cut into half. Which was perfect for finicky eaters like myself,  who don’t want to get their hands dirty.

Any good prawn noodle fanatic knows that everything hinges on that umami-laden broth. I like my hae mee broth full of prawny goodness but tempered with the pork bones that have been simmering for hours.

The broth is what differentiates mediocre hae mee from a bowl of truly fantastic prawn noodles. 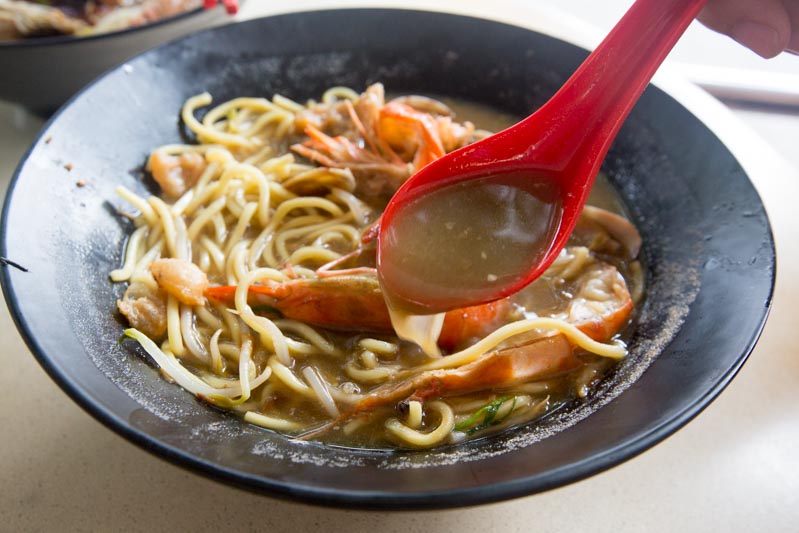 That’s why Zhenjie Seafood’s broth took me by surprise. Their broth was fragrant but much lighter and sweeter than I was used to. The owners of Zhenjie Seafood tell me that this broth is a little different from the usual prawn noodle soup.

Zhenjie Seafood first fries the heads of three different types of prawns in garlic oil to get those intense prawn flavours going before letting them bubble away with pork and chicken bones. The broth tasted clean and was more fragrant than the usual fare.

While this was a refreshing change, I would have liked the broth a tad punchier. 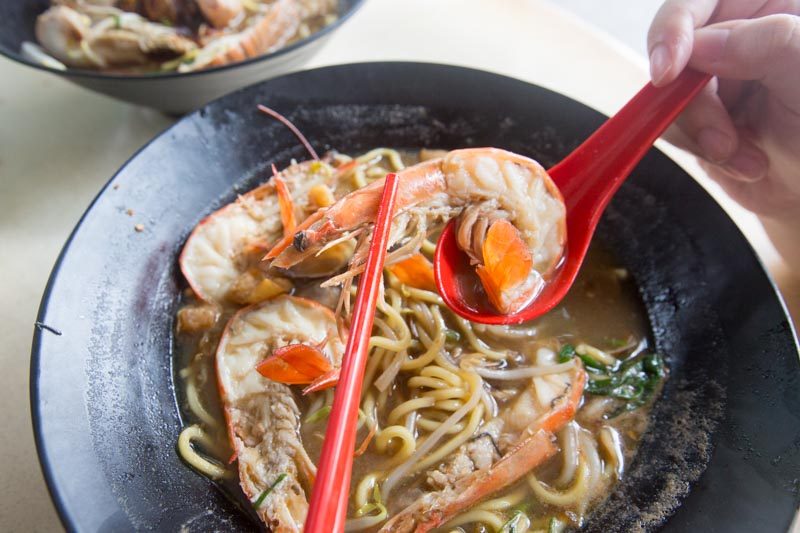 Now, for the main attraction—those vibrant prawns. The prawns separated pretty easily from the shell and the prawns were fresh and succulent. No complaints here. Another thing you can look forward in this bowl of prawn noodles had to be the clams. Zhenjie Seafood was pretty liberal with their clams, which added more depth to the broth. Another thing that makes prawn noodles so great has to be those crispy pork lard pieces. Fatty and oh-so-decadent, you can’t stop at one. As a whole, this was a pretty satisfactory bowl of prawn noodles. With a well-made broth and quality ingredients, it’s hard to go wrong here. 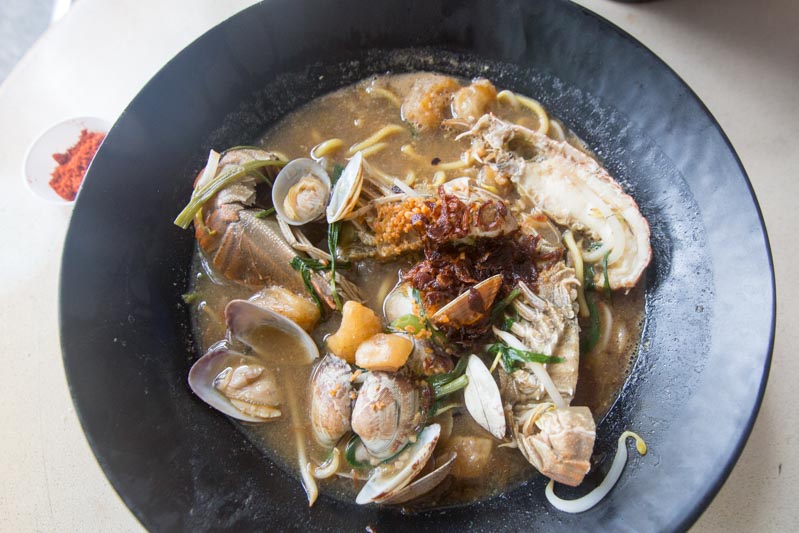 For a more lavish selection, you can opt for the Crayfish Seafood Noodle Soup (S$10/S$15/S$20), which came with a handful of clams as well. This was definitely one of more premium bowls of prawn noodles you can get. The crayfish used for this bowl is also known as slipper lobster or lobster’s less glamorous cousin. Besides being much cheaper than the lobster, the crayfish is also the preferred choice for its sweet and delicate flavour.

Zhenjie Seafood was generous with their portions for sure, I had two large crayfish and a liberal amount of clams. 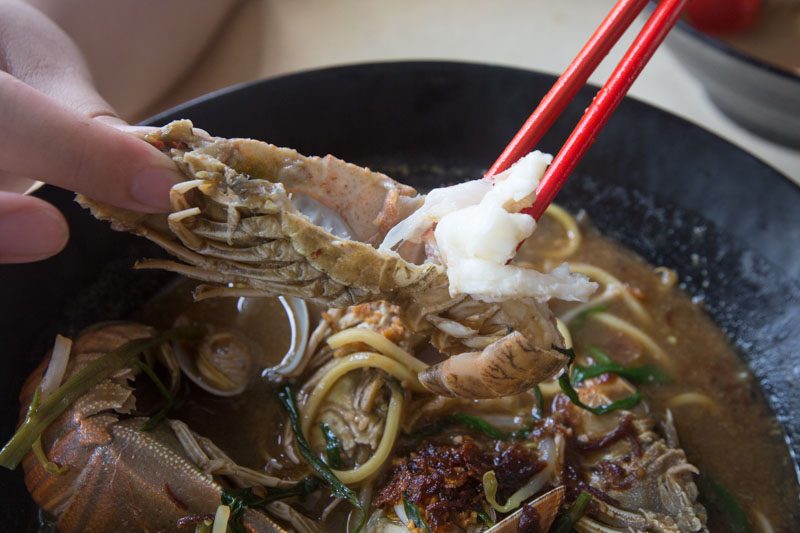 I was pretty impressed with the quality of the crayfish. I could pry the flesh pretty easily out of the shell—a sign that the crayfish is fresh.

If you never had crayfish before, the texture is pretty similar to lobster, but much milder in flavour. Think of it like lobster on a budget if you will, and an option that won’t break the bank. 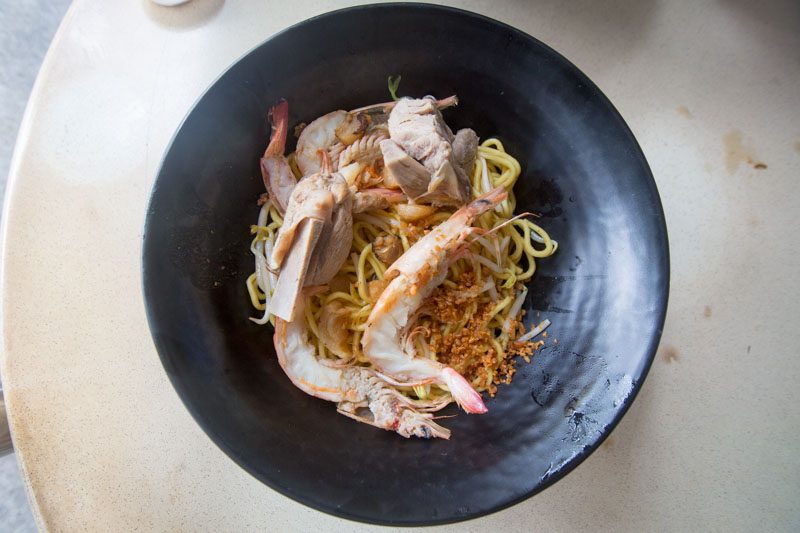 Just to switch it up, I had the Dry Pork Ribs with Prawn Noodles (S$5 /S$8). I’m a little bit of a purist (can you tell?), so dry prawn noodles are not usually my go-to. As with dry prawn noodles, you have a give it a good mix first so the shallot oil and chilli coats every inch of the noodles. 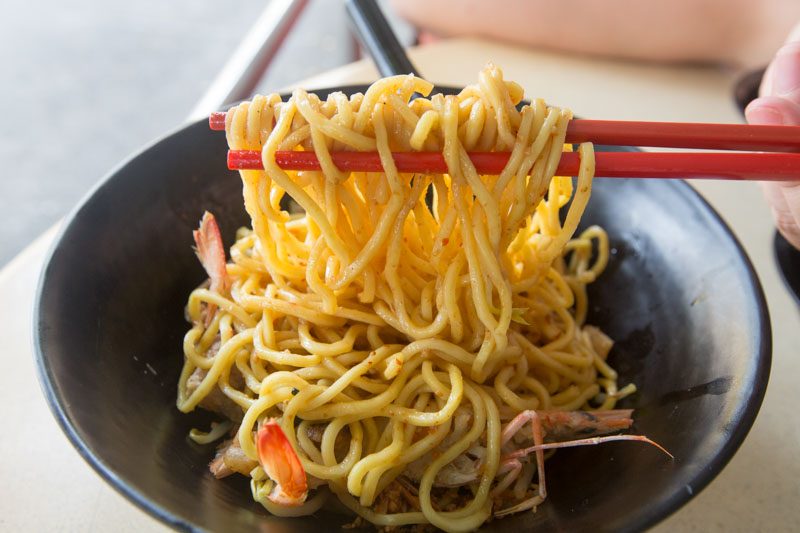 There are some who prefer the dry prawn noodles as opposed to soup version and I can see why. The flavours are more pronounced and piquant. The chilli has a slow, addictive kick that makes slurping the noodles all the more gratifying. 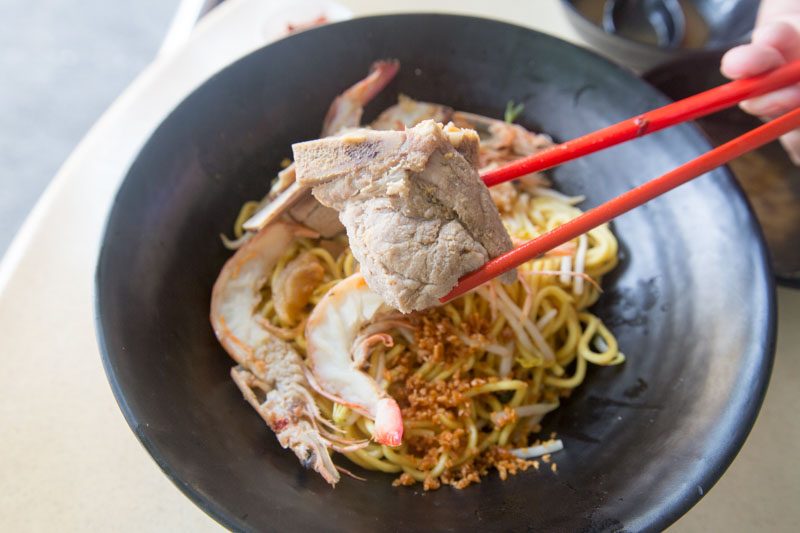 I was a little apprehensive about trying the pork ribs as they looked a little parched. But ever the intrepid food journalist, I went for it. The ribs were tender and fell off the bone, the shallot oil and chilli further enhanced the flavour of the pork. After having this, I have to say I’m a convert.

I loved how much brighter the flavours were in the dry version, each element shone through and slurping this was just as satisfying.

Zhenjie Seafood also has the more traditional Pig’s Tail (Prawn) Noodles (S$5/S$8), which is pretty popular with the older folk that patronise his stall. If crayfish is not your thing, then Sliced Abalone Prawn Noodles (S$6/S$8) would be a great choice.

Zhenjie Seafood also has the more traditional Pig’s Tail (Prawn) Noodles (S$5/S$8), which is pretty popular with the older folk who patronise his stall. If crayfish is not your thing, then the Sliced Abalone Prawn Noodles (S$6/S$8) would be great if you are feeling really fancy.