11 exotic dishes that can be found in Singapore

Singapore truly is the land of amazing food, more than you can imagine. From the infusion of settlers from all over the world, especially Asia, these travellers have also brought with them their exotic and bizarre food, commonplace from where they came but unique to our little island.

All those years of binge-watching Fear Factor on the telly prepared me for this article. I consider myself quite an adventurous eater, so I was terrified yet excited to try a range of exotic food dishes.

Suffice to say, my stomach made it through the end for me to record my findings. Presenting 11 exotic dishes that can be found in Singapore. What do zombies often crave? That’s right, brains. First on the list is the Sup Otak (S$8.50 for small, S$16 for medium, S$24 for large) which translates to goat’s brain soup. Tucked away in a little stall full of rich history (and sup kambing), Soup Kambing Haji M. Abdul Rajak located at Upper Boon Keng Road is known for not letting any part of a goat go to waste; hence, the inclusion of brains in his soup. For S$8.50, I got myself a decadent brain-filled soup. I’ve never tried the brains of any animal before. But I personally know of people who swear by it. I held my breath, bit into a chunk of brain, and immediately felt the sliminess of it. Although it took a while to fully disintegrate on my tongue, it didn’t have much flavour to it. The texture was similar to semi-firm tofu and has a gritty aftertaste. I’m not good with innards or organs, so this was going to be a real trip; I prepped myself to have a piece of the tongue. After an eternity of wincing and whining, I eventually popped a piece in my mouth, and surprisingly enjoyed the chewy and bouncy-textured tongue.

Brains certainly aren’t for me, but I’d have another serving of Lida Daging any day. A simple look at the pieces of Turtle Meat floating around in soup may be enough to send some recoiling back in disgust. To be honest, the sight does remind me of certain horror movies. However, my uncle told me that turtle soup is said to have multiple health benefits such as the detoxification of blood, lowering blood pressure, and increasing blood circulation. Perfect for my ageing, close to 30-year-old body. At Very Lucky Turtle Soup, the cheapest bowl of Herbal Turtle Soup will only set you back S$10. Cheaper than a bottle of multivitamins. If you’re squeamish but still want to enhance your blood circulation, drinking the soup will suffice. You don’t have to dig your teeth into the mushy white mess. In traditional Chinese medicine, Lu Bian or Deer Penis is considered to be an aphrodisiac— a substance that enhances sexual desire and drives when consumed. It is commonly thought of to be beneficial for males during their bedroom activities. Men in Singapore will be pleased to know that this soup can be found locally. If they are not too concerned with putting a penis in their mouths, that is. It surprisingly didn’t taste as bad as it sounds. Think braised pork in a double-boiled herbal soup. Albeit, a saltier version. Nonetheless, how many of you can say you’ve had a deer penis in your lifetime? Well, I can now! Imperial Restaurant also has a Crocodile Tail Soup (S$16) if you thought eating a crocodile’s paw wasn’t weird enough. Crocodile tail, as you can imagine, is on the tougher side so many restaurants opt to cook the softer regions as a delicacy. I’ve had crocodile meat before, its tail, however, is a new one for me. To rid the gamey taste of crocodile, a range of herbs are added and the meat is slow-cooked. Personally, crocodile meat tastes like chicken, but its tail has a weird jellyfish-like texture. It is soft and slimy, unlike anything I’ve tasted before. Its soup, however, tastes like hot chrysanthemum tea.

Strangely enough, I enjoyed the soup a lot! 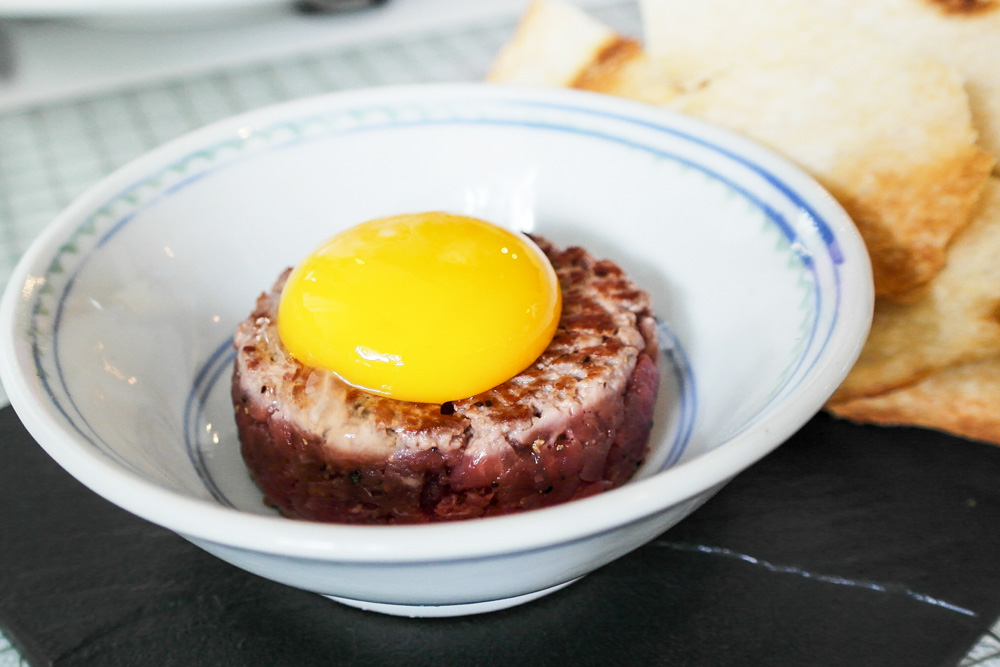 Steak Tartare (S$39) features minced, raw beef that is often topped with an aesthetically pleasing egg yolk. It’s normally seen in French or Italian restaurants, and not as uncommon as you think. This will probably appeal most to those who like their steak really rare.

Like all raw meats, there are health concerns, such as contamination of the beef by bacteria or parasites. Due to the tight meat structure of beef, this is one of the rare meats you can eat freshly raw like fish (poultry and pork on the other hand tend to harbour more dangerous organisms).

Still, pregnant women and those who have weak immune systems are highly discouraged from attempting steak tartare.

For all the daring others though, several restaurants in Singapore have this dish on their menu. Just make sure that your stomach is up for it, though. 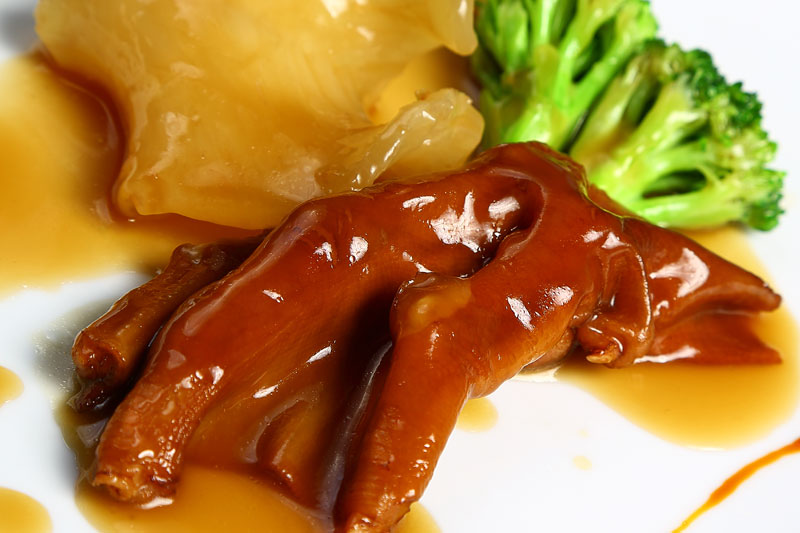 Eating the web of a goose might sound weird to many, but braised goose/duck web is a very popular dish in Hong Kong especially. Waste not want not, right? When cooked right, the web is soft, tender and falls off the bone easily as you chew it.

Eating webbing supposedly makes you a better swimmer, as the Chinese proverb goes: 以形补形, roughly translated as gaining the benefits of eating something physically similar to what you want to improve. When it comes to sharks, their fins are highly sought after, but did you know there are places in Singapore that sell their meat? To be honest, I’ve a real soft spot for sharks, so my colleague, Gillian, did the honours of tasting the Apex predator for me. Get yourself a bowl of Fried Shark Lor Mee (S$4) and tuck into the little golden nuggets of goodness. Its texture reminded Gillian of vadai— crispy and smooth on the outside, but soft and spongy on the inside. If she didn’t know any better, she’d have thought it was regular fish meat. Adding on that the meat is silky, firm and slightly sweet, with a slight fishy aftertaste that wasn’t entirely unpleasant. Bone Marrow or more affectionately known as, tulang, is no stranger to the older generation. But to many, it’s still considered exotic. Made with either goat or beef meat, you can find it as a soup dish, doused in red sauce, or at The Social Outcast, roasted. The Roasted Canoe Beef Bone Marrow (S$28) here is unlike the typical tulang dishes that can be found around the island. It comes served with tomato concasse salsa and chicken crackling with a side of char-grilled focaccia.

Its silky smooth meat akin to phlegm will glide down your throat with ease. Frankly speaking, it doesn’t have much of a taste, which is why it’s usually doused with heaps of other spices.

A quick Google search revealed that it maintains skin, bone, and joint health, and is full of collagen. Pretty much solves the mystery as to why it’s popular with the older generation. It takes a brave soul and utter trust in the chef for one to put a piece of Fugu (pufferfish) in the mouth. There is no antidote available for the poison contained within the organs of the pufferfish and death usually painfully occurs through conscious suffocation.

Not that there is anything to excessively worry about because chefs who prepare fugu need to have undergone at least three years of training and then be legally certified before they are allowed to serve the dish. But sometimes, accidents do happen, so eat at your own risk at Peace Japanese Cuisine.

The mushy, brain-like structure you see in the picture above is none other than sperm-filled fish male genitalia (Milt) or, as the Japanese term it, Shirako (white children). Well, when I first heard about the existence of such a dish being served in Singapore, my reaction was a simple ‘eew’. Why would anyone want to eat fish sperm?

Then I found out that it wasn’t so different from the ‘normal’ female roe which is commonly found served on top of sushi. You know those cheery orange fluid-filled delights? Yup. Shirako, similar to fish roe, is rich in micronutrients, anti-inflammatory omega-3 fatty acids and even vitamin B12. If you have the guts to stomach Milt, there are a couple of Japanese restaurants which serve this delicacy, which is known to fully utilise the entire fish.

I’ve heard you can find them at Don Don Donki, too!