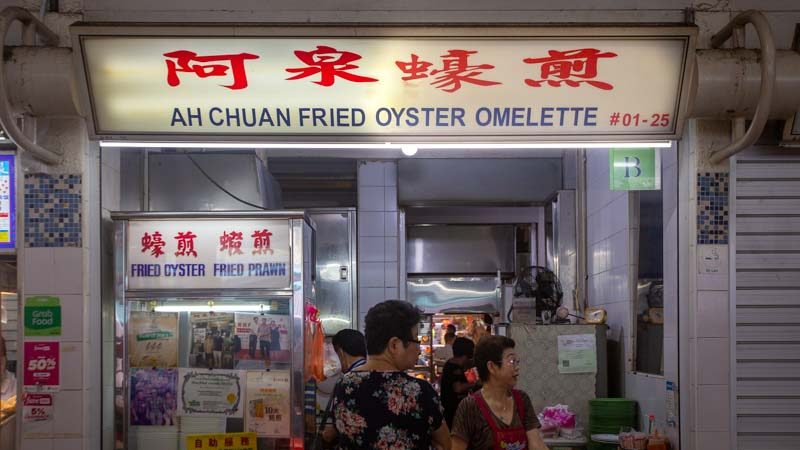 I felt incredibly privileged to be reviewing Ah Chuan Fried Oyster Omelette. When you hear that something is the best, you know you want to at least try it to believe it.

And so, the hunt took us to Toa Payoh Lorong 7 Food Market, where so many stalls here are considered top in their field. It’s no surprise that one of the best oyster omelettes would hail from here as well.

The couple running the stall has been here for at least a good 40 years! That’s way longer than I have been alive. 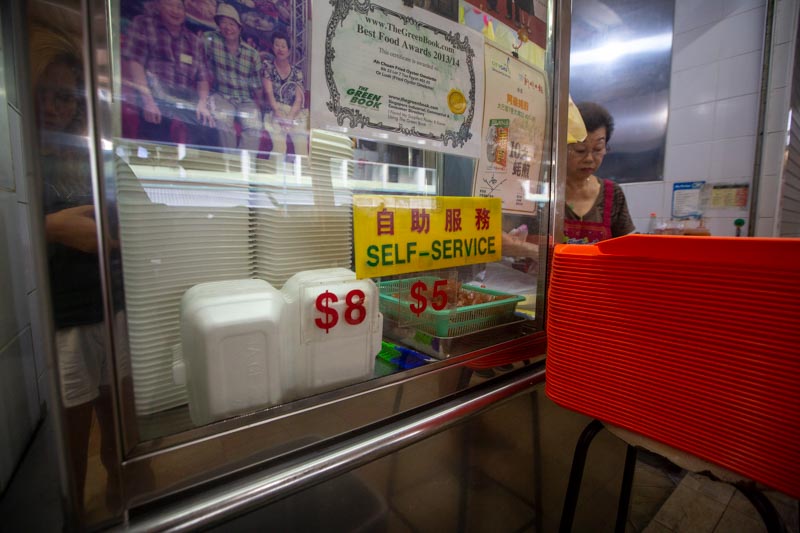 The dynamic duo work in tandem; Uncle keeps the wok frying, while Aunty takes orders and garnishes them for serving.

Going straight to the point, I asked Aunty what made their Fried Oyster Omelette (S$5/S$8) so popular with crowds. Uncle chimed in, “I believe it’s the batter — they like our batter.”

I’d have to try it to know for myself, so we went ahead and ordered the largest portion. We were ready to bask in the goodness that Ah Chuan Oyster Omelette had to offer. 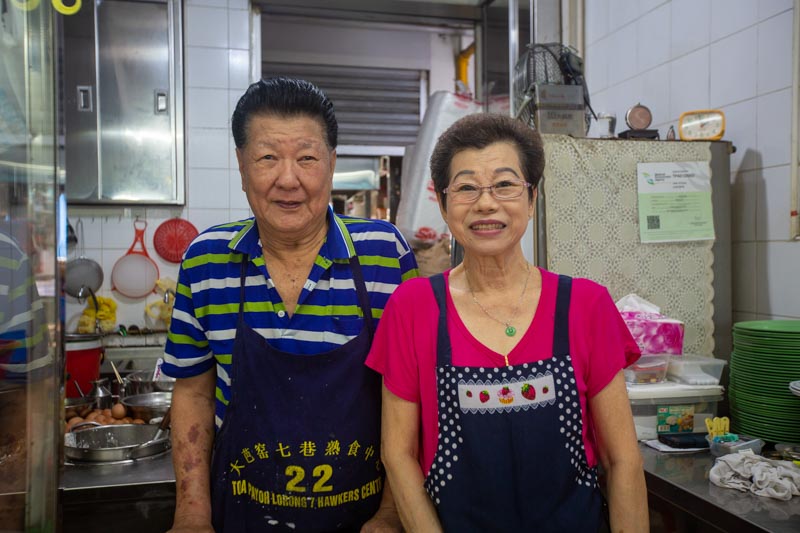 Uncle fries the egg, batter, and handfuls of Korean oysters in rhythm. He then passes on the piping hot plate to Aunty, who tops it off with cilantro. 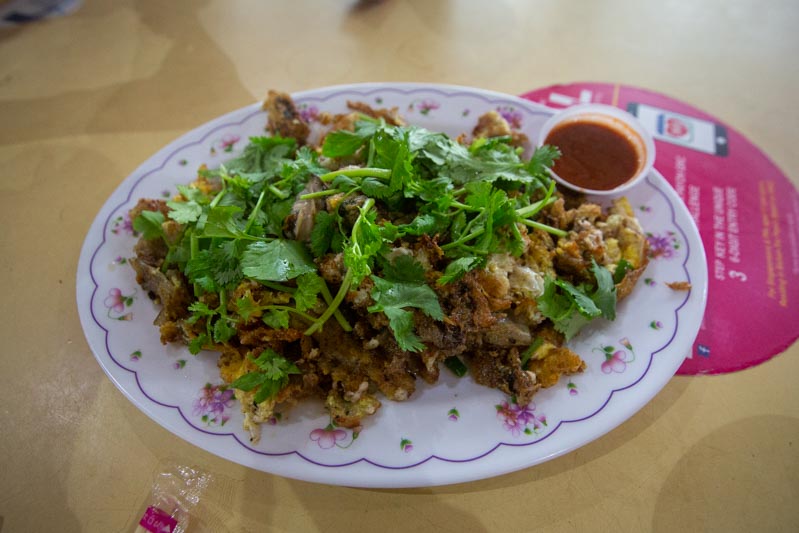 When Aunty served us the plate, we had a wow moment, staring at that huge serving. Without question, this dish is best paired with lime-infused chilli. Not only does Ah Chuan Oyster Omelette lay out the saucers of chilli for customers’ ease, but there are also bottles by the side should you need a refill.

I personally think you definitely will need that refill, considering that we filled up three full saucers. 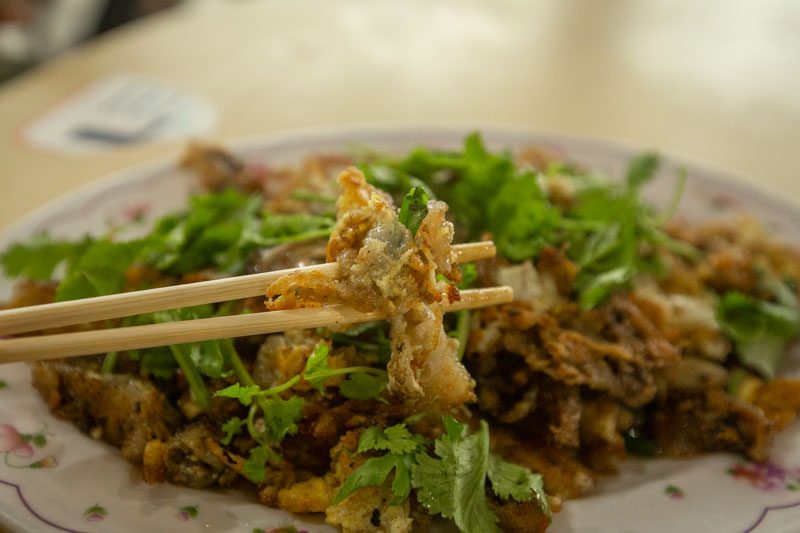 After just one bite, I understood why regulars of this stall keep returning! The fried batter kept the outside crispy, while the inside remained soft and chewy. Each oyster had a unique briny sweetness; a touch of the ocean. If only I could stuff my face with a plateful of them!

Ah Chuan Fried Oyster Omelette’s queue speaks for itself. After all, the number of Singaporeans in a queue can be said to be the indicator of how good something really is. For the seafood lover, a recommended off-menu item is a combination of their prawn and oyster omelette, which comes in S$8 and S$10 portions.

Despite being in their early 70s, the hawker couple had a glow to them. 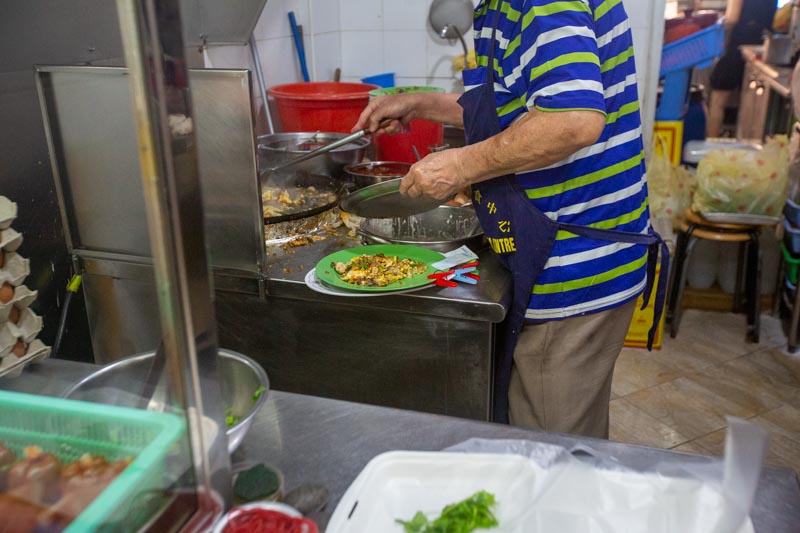 Aunty reminisced the days when they used to open from 5am to 10pm. Eventually, they shortened their operating hours with age.

“Most customers these days are regulars. Even after moving out (of Toa Payoh), they still come back for this (oyster omelette),” she shared. 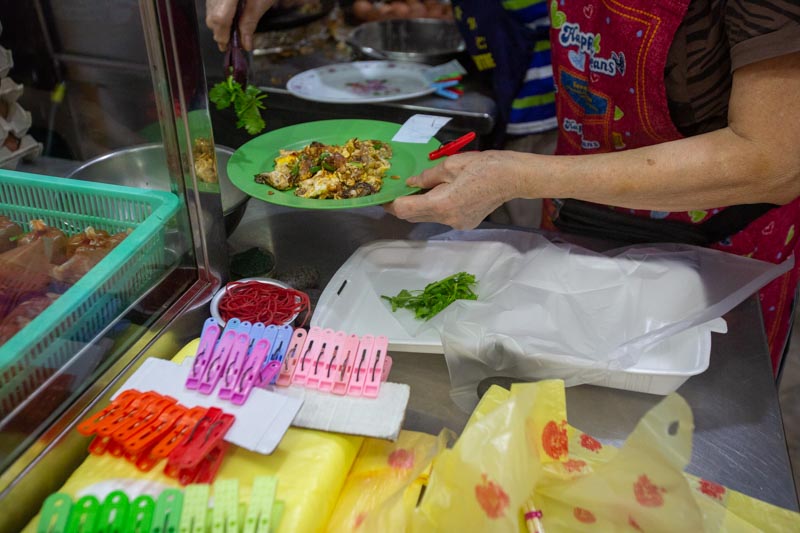 Amongst the regulars, Aunty points us towards a young man who frequents the stall daily.

When asked if they had plans for retirement or a handover, the couple firmly replied that they would continue for as long as they can. They would rather their children pursue white-collar jobs. Aunty shyly reveals that several publications have visited, not to mention actors, actresses, and radio DJs, with many agreeing that their Fried Oyster Omelette is truly one-of-a-kind.

Rest assured, Ah Chuan Fried Oyster Omelette will be around as long as there are patrons who love their oyster omelette.

Do chat up Aunty if you ever visit the stall! She would be glad to share her stories about her children, and she definitely will want to hear yours. It was truly an honour to have been a customer of Ah Chuan Fried Oyster Omelette, and I would agree that it’s really one of the best. Get Fancy At Beverly Hills Cheesecake Factory At Raffles City This...