All Coco: Bangkok’s Famous Coconut Ice Cream & Drinks In SG At The Cathay

If you’ve walked the streets of Bangkok’s Chaktuchak Market, then you’ve probably known the struggle of snapping a picture of the famous coconut ice cream while racing against the melting dessert under Thailand’s sweltering heat.

Well, you can finally do that here now. One of Thailand’s best Coconut brands, All Coco, has just landed in Singapore and is located right at the entrance of The Cathay. 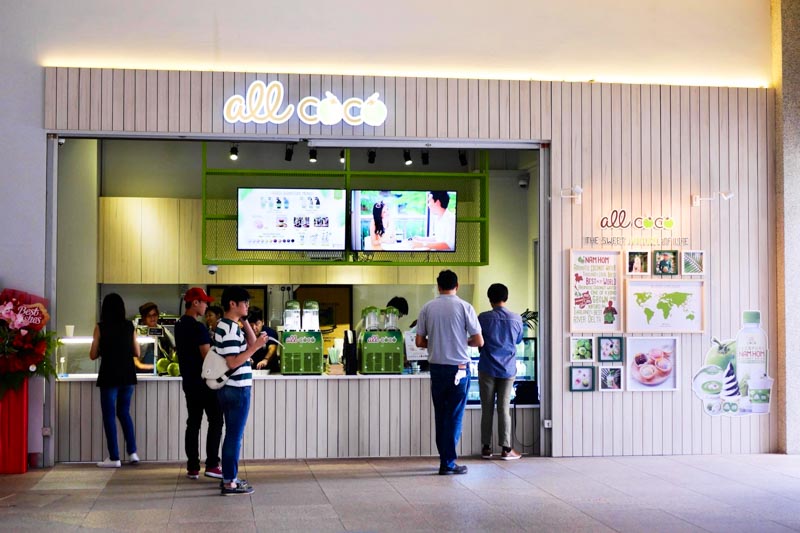 The franchise owners greeted us with a warm welcome and offered us a host of products to try. When asked why they decided to bring in All Coco, they explained that while they were in Thailand the brand stood out to them the most.

It helped that they don’t use heat treatment nor preservatives in their products at all, so you know everything’s fresh. 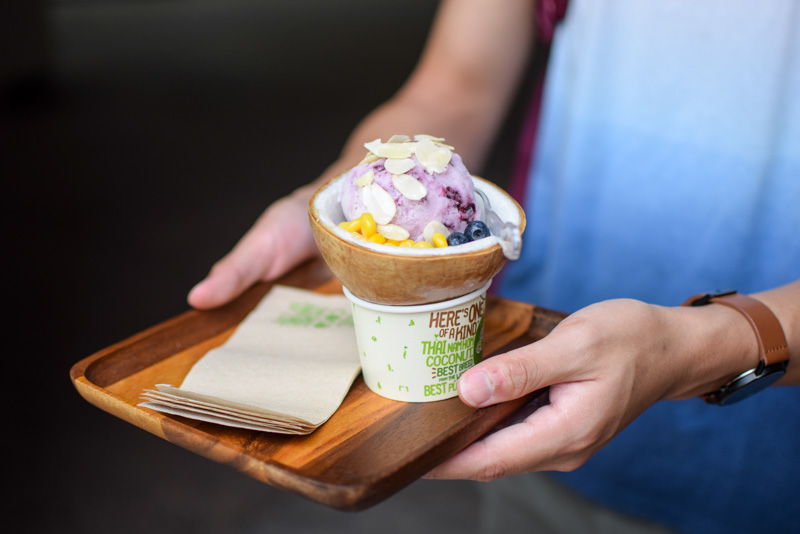 Of course, the very first thing we had to try was the well-loved ice cream in a coconut husk, or as All Coco calls it, the Coco Iceland ($6), which includes one scoop of ice cream and a choice of any three toppings.

I learnt that they change up their flavours each month, so you might want to hop over every now and then to check in on what’s new. Plus, I managed to take the typical hand-in-shot photo without having to worry about it melting nor having hoards of people in my shot. 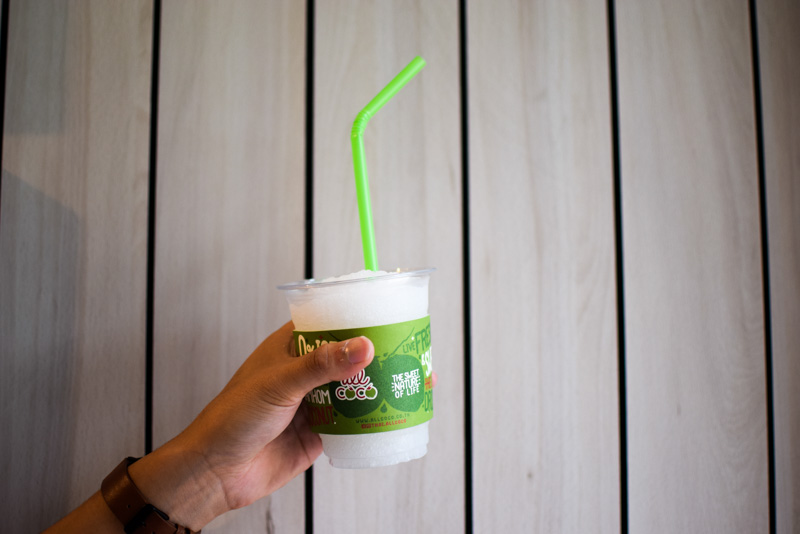 What you see here is the Coco Snowflake with No Sugar ($5.50 for medium, $6.80 for large), which is essentially the slushy version of coconut water.

I liked this because the only sweetness in the drink came from the coconut’s natural sugars, making it a very easy-to-drink and guilt-free refresher! 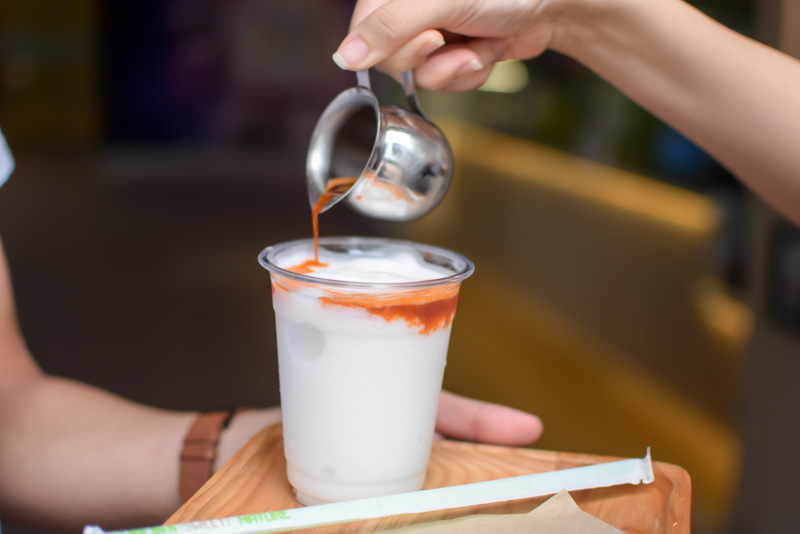 The Coco Royal Thai Tea ($8) was one of the most expensive things on the menu, and we’ll find out if it was worth the money.

What you see here was just a sample portion given to us, but the real deal consists of a large extreme Snowflake served with double shots of Thai tea. 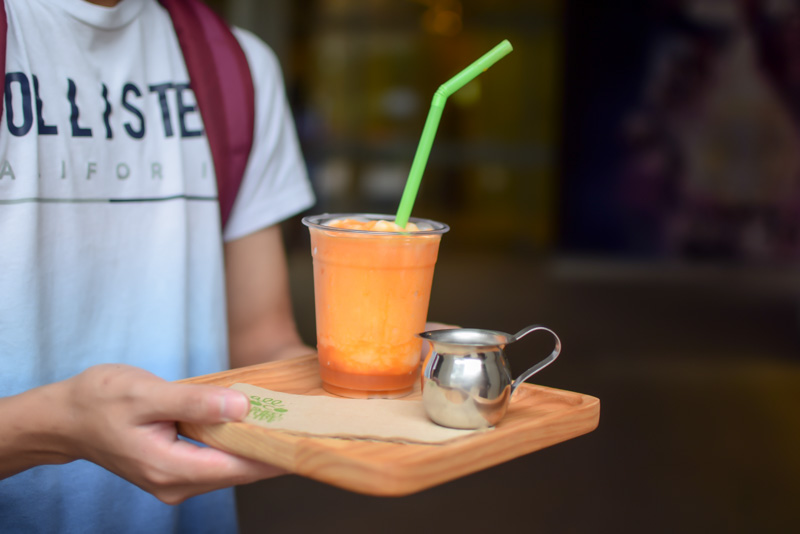 We slowly drizzled the warm tea syrup over the coco snowflake, allowing it to melt just enough to get the slushy texture. The Thai tea and coconut flavours were good on their own, but it stayed at that because they seemed more isolated rather than harmonious.

The verdict? We love Thai milk tea and we love coconut, but we just aren’t sure if they’re meant to go together. 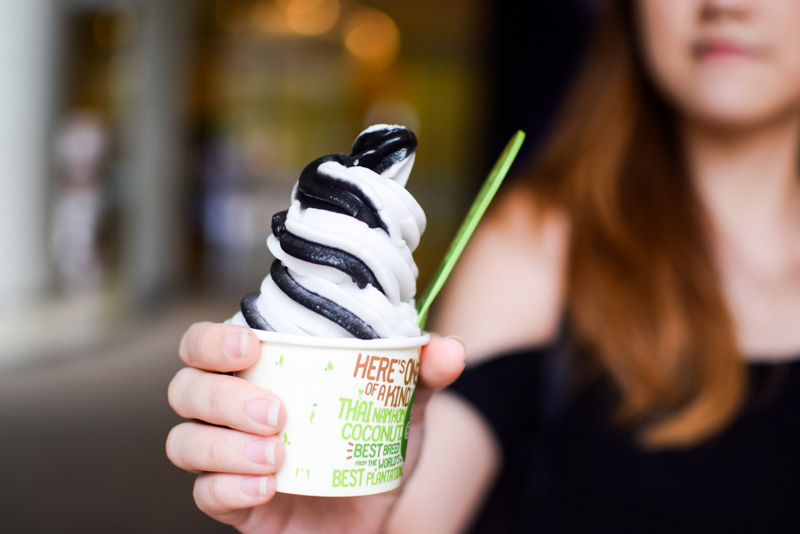 This was the Coco Soft Serve ($4.80) with a mix of the original and charcoal flavours. The co-owner told us that this was the most popular soft serve because of both its aesthetics and balance of flavour.

I liked that it wasn’t too sweet, unlike many coconut ice creams, but the consistency seemed a bit too icy to be considered soft serve. I would’ve preferred if it was creamier and smoother. 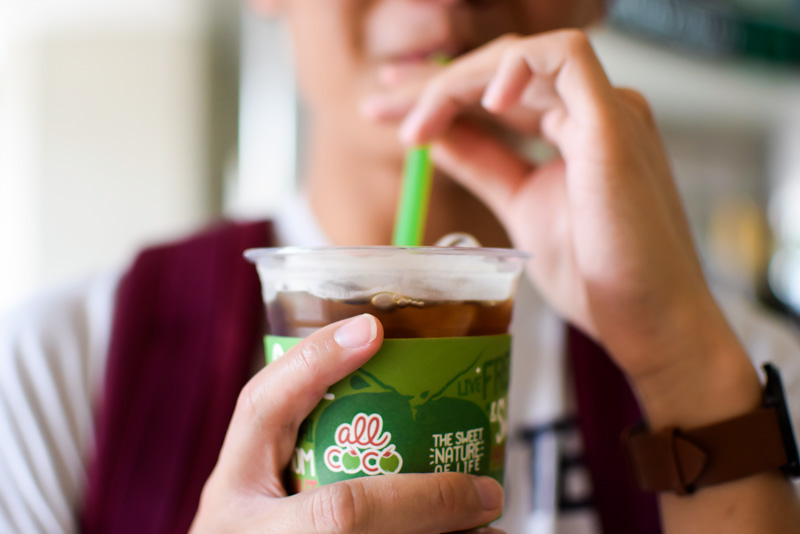 We’re die-hard coffee fans and some of us can’t go a day without one or two doses of caffeine, so the Coco Americano ($5.80) was a must-try for us. It comprises one espresso shot mixed with coconut water, in place of plain water. 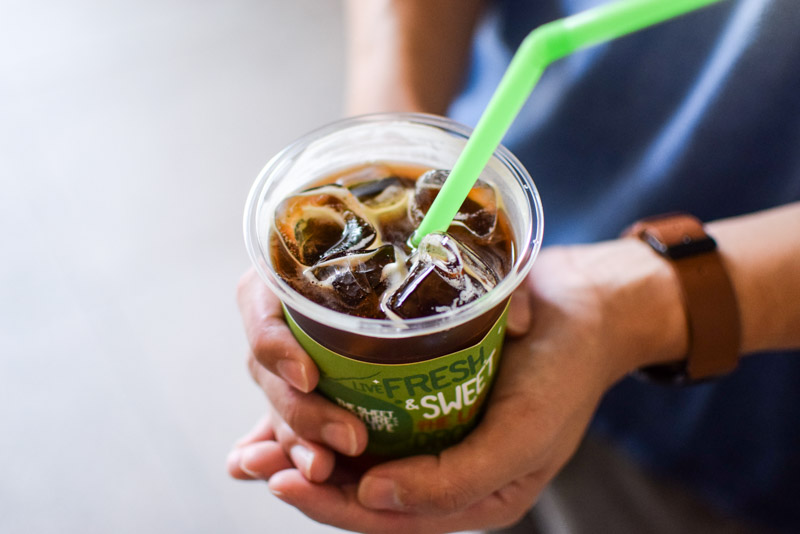 I usually prefer my coffee with milk because I find Americanos too strong and acidic for me, so I didn’t get my hopes up for this one. This Coco Americano, however, was actually really easy to drink and didn’t reek of acidity at all!

Due to the coconut water, it was more fragrant than other Americanos I’ve tasted. My colleague was quick to claim it as his and downed it in a heartbeat. 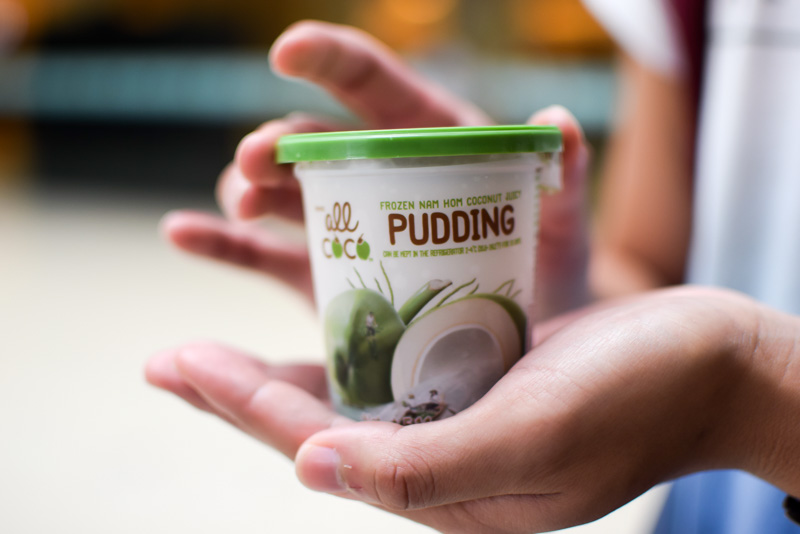 The Nam Hom Coconut Juicy Pudding ($3.80) was something new because you usually get your coconut fix in the form of drinks or ice cream, but never really pudding.

The texture was soft and jelly-like, but you’ve got to eat it quickly because it melts really fast. Also, the serving was a little small —  five to six mouthsful tops (if you take big mouths), so it didn’t seem that worth it to me.

Overall, I felt that All Coco generally delivered in their coconutty promises, but their products are rather pricey considering they’re just drinks and dessert. Hence, it’s probably not the kind of thing I’ll have every day, but I’ll surely hit them up if I’m in the area looking for a perk-me-up!