I remember patronising a flea market a few years back, where I chanced upon Two Men Bagel House as one of the F&B line-ups. The bagel craze hadn’t fully hit us yet, but being the cool (and hungry) teenager I was, I bought some bagel sandwiches for the ‘gram. Fast-forward a few years, and bagels have become a popular brunch food to bond over with friends.

There are only a handful of places in Singapore that specialise in selling them, but it can still be a headache deciding on which ones to visit. To see which is most worth your time and money, I compared my experience at these two top bagel places. Two Men Bagel House has been around since 2014, where they opened their first outlet in Tanjong Pagar.

My companions and I made a visit down to their sister branch at Novena, which popped up in 2018. Unlike their main branch, this one features al fresco-style dining. 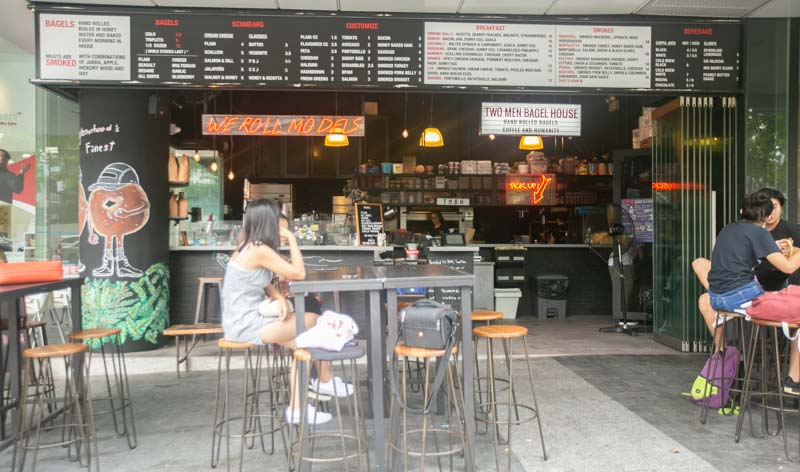 With their extensive selection of bagels, I was truly spoiled for choice. After much internal debate, I decided on the Lox (S$12), Hammer (S$10) and Plain Bagel with cream cheese on the side for S$4.

Our fourth option was the pizza bagel, which has sadly been taken off the menu, so we chose to customise our own. 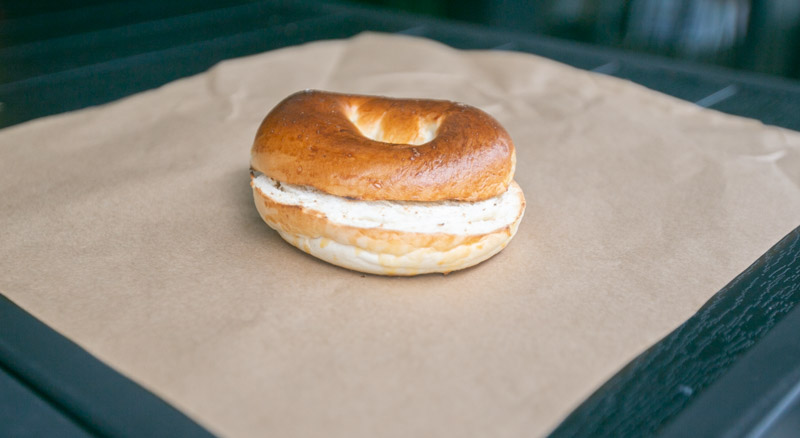 Fancy ingredients aside, having bagels plain is how you really get to taste the bread on its own.

Even though I bit into it a good few minutes after it was served—thanks to all the photo-taking duties—it was surprisingly still decently soft, with a crisp to the edges. 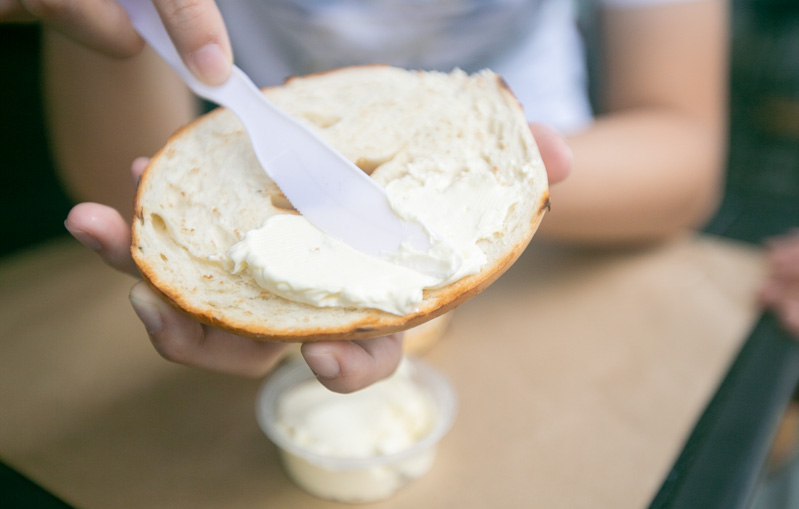 The cream cheese was thick but I could spread it on the bagel with ease. It coated my tongue with a slightly tangy taste, and while I wished there was a stronger flavour, it did well in complementing the plain bread. Ready to dive into the other bagels, we started with the Lox first. Pulling apart the hefty, conveniently-halved sesame bagel revealed densely packed egg and salmon goodness.

It came with a generous portion of smoked fish, which was tender with a smoky saltiness typical of cured meats. Discounting the unpleasant post-meal onion-breath, I enjoyed the nice crunch and kick of acidity they added to the salmon.

I also appreciated how the sourness of the cream cheese and spice of the pickled mustard seeds gave the sandwich much more dimension.

The hard-boiled eggs, though simple, definitely made each bite of the Lox much more wholesome too. If you want a classic American breakfast in a bagel, Hammer is your choice. To keep it simple, we paired it with a plain bagel.

That satisfying stretch of cheese when we opened the sandwich up? Checked. Although it’s supposed to come with scrambled eggs, it felt like more of an omelette to me. I wasn’t complaining though, since that makes for a less messy bite each time.

Plus points for the fact that despite being layered together with the eggs, the bacon was not soggy. It had more of a bite to it, with crispier bits on the edges that I enjoyed. It also lent a nice saltiness to the otherwise plain ingredients.

Some might argue that this is just a glorified version of a McDonald’s Egg McMuffin—which I don’t disagree with—but at least it was a satisfying combo of eggs, bacon and cheese done right. Somehow, the bacon was exceptionally crispy in this one, which I really enjoyed. 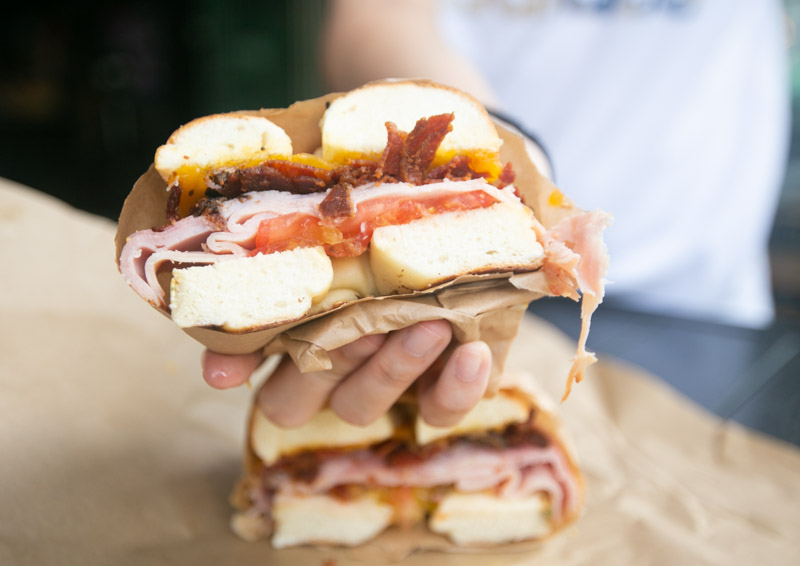 I appreciated how they weren’t stingy with the amount of ham given, which was meaty and tender. I did not notice much of the honey flavour, probably because of how preoccupied I was with the savouriness of the bacon.

It did take me a while before I was able to taste a hint of sea salt on the bagel, since the seasoning is only on certain edges. Our creation totalled up to S$11.50, which I think was pretty value-for-money considering how quickly I devoured the self-made pizza.

From appearance to quality, the bagels from Two Men Bagel House certainly live up to the brand’s popularity. 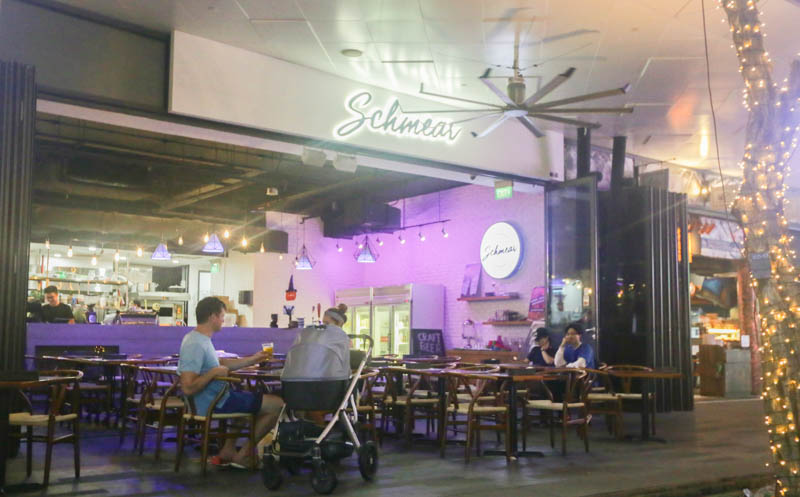 There are only a handful of bagel houses in Singapore, and Schmear, which apparently sells one of the best bagels here, is one of the standouts.

The brand was founded in 2017 by a pair of siblings, Jason and Stacey, who hail from New York. 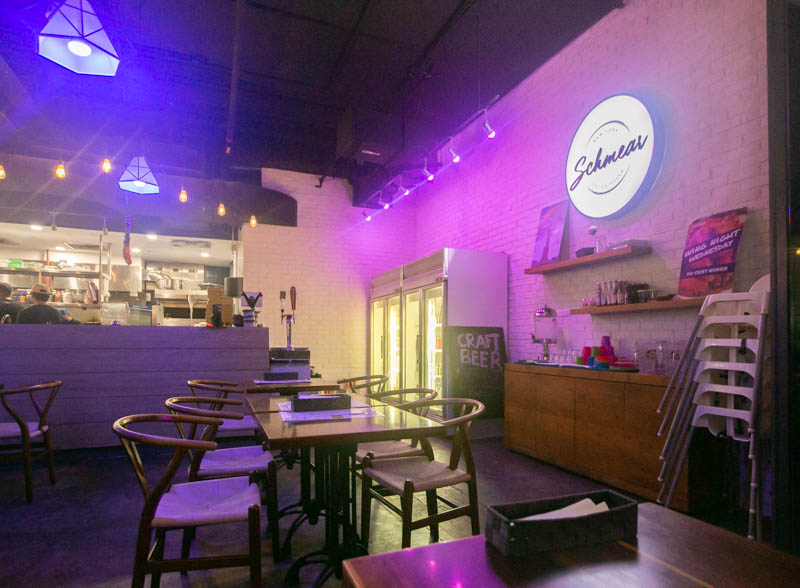 Schmear is situated in Quayside Isle at Sentosa, and upon arriving, we picked the outdoor seating for the breeze and clearer view of the water.

The bagel selection here is definitely much more limited compared to Two Men Bagel House (TMBH), but we were able to choose a similar set of items for our comparison. After the usual photo-taking madness, I sunk my teeth into a piece, and oh boy was it tough. We wondered if it could have been the waiting time, but my dining partner managed to sneak a bite when it arrived, and found it was pretty stiff.

We decided to order another, which somehow came much more toasted in colour, and was way fluffier and crispy on the edges. 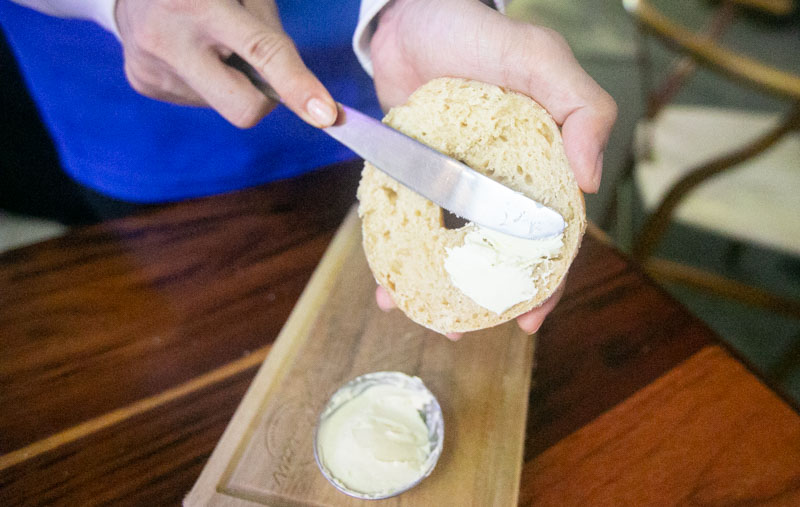 We smeared some cream cheese on, which was thick and smooth, but seemingly blander than TMBH’s. I would have enjoyed it with just a bit more sourness and oomph. 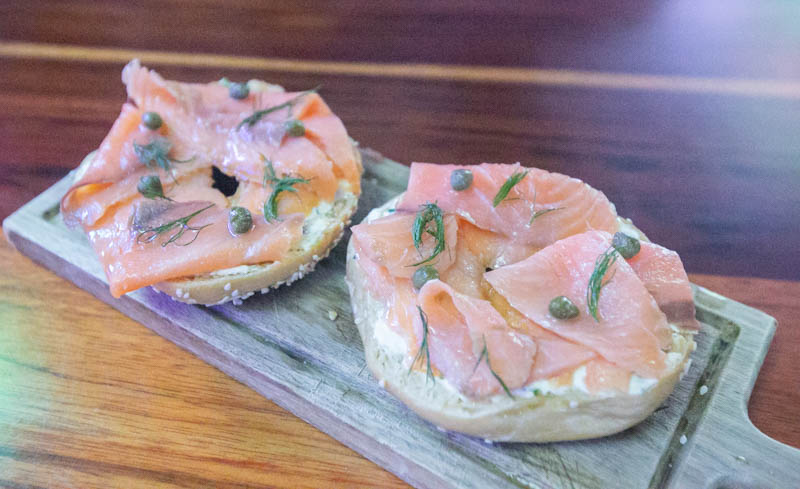 We went for The Central Park (S$14) next, which comes in two open slices. There was a nice amount of smoked salmon laid out on the sesame bagels, which were tender but had a bite.

The bagels were a tad too tough to bite into, but there were some crunchier bits. The spring onion cream cheese spread did help to add some creaminess to the bread though. 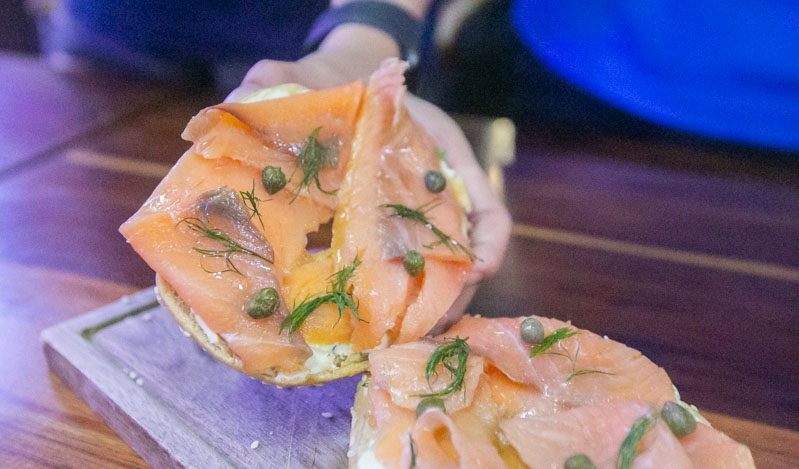 I love anything pickled, so the capers added nice tangy, sour and salty bursts of flavour to the salmon.

While I enjoyed the salmon, I think having more ingredients would have made the S$14 more worth it. 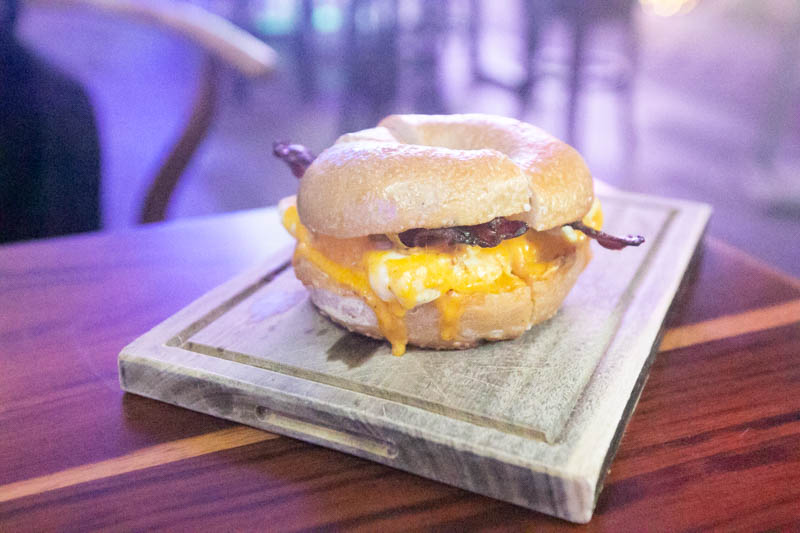 We moved on to The New Yorker (S$11) next, and added on crispy bacon for S$3. It comes in a similar sandwich-style like TMBH’s, and features the usual combo of fried eggs, bacon and cheese.

There wasn’t anything to pick on for the eggs and cheese, which were simple but savoury and hearty. 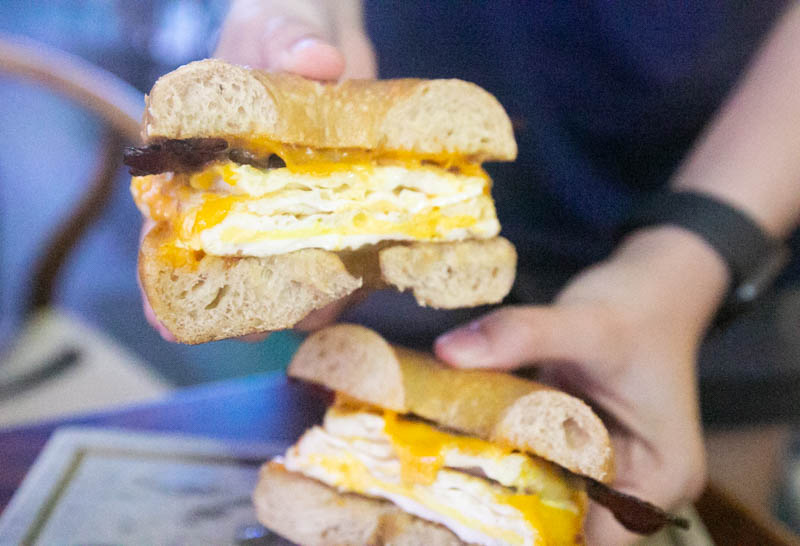 It was just a pity that the bacon did not have much of a crunch to it, which would have made each bite much more satisfying.

The bagel totalled up to S$14, which is S$4 more than TMBH’s Hammer. I guess Schmear being at Sentosa plays a part in having a pricier menu, but TMBH’s version still has my vote. 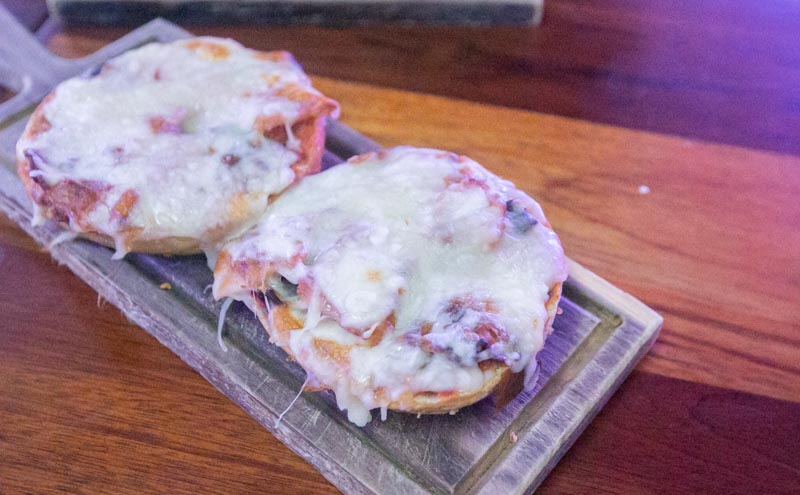 Schmear offers a Pizza Bagel (S$8) which comes with tomato sauce and cheese, so we didn’t have to customise our own. We picked the garlic bagel and added on ham (S$3) and bacon (S$3) to replicate our TMBH version.

I wasn’t expecting the nutty bits on the bagel, which gave a pleasant crunch to each bite. The garlic flavour was very slight though, and I would have preferred it more fragrant and strong. I liked how a thick spread of melted cheese completely covered the toppings, and gave off that satisfying gooey stretch. I enjoyed the savouriness of the bacon and ham, but again, I wished the bacon was crispier.

I was pretty eager to try out Schmear, but while I enjoyed the different toppings offered, the toastiness of the bagels was a hit-and-miss during my visit. Even though I expect the prices to be higher due to the location, I don’t think the experience matched up.

The bagel place that I think is more worth your time and money? Two Men Bagel House (TMBH), hands down. In terms of price and quality, TMBH certainly has my vote over Schmear.

It seems like at this point until a stronger contender comes in, TMBH still reigns supreme in the local bagel scene.

Are you a fan of Two Men Bagel House or Schmear? Let us know what are some of your other go-to places to satisfy your bagel cravings! Celebrate The F1 Weekend With Free-Flow Steak At SEAR From 21...