10 best Spanish restaurants in Singapore that will make you go mmm-delicioso!

Spanish restaurants have probably one of the most underrated cuisines in the world. Unfortunately, it is often overlooked. When people think of Spain, the first thing that comes to most minds would probably be football clubs— in particular, Barcelona or Real Madrid. Or that might just be me.

It is quite fortunate for us to have quite a number of Spanish restaurants on the island, so that we can get a feel of what Spain has to offer when it comes to food. You might want to keep a Spanish-to-English dictionary on hand as I bring you the 10 best Spanish restaurants in Singapore that will make you go mmm-delicioso! Helmed by Head Chef Jose Alonso, Kulto aims to bring a slice of Spain to the dining experience at the comfort of 87 Amoy Street. Customers are given front-row seats to watch the chefs prepare their food in an open kitchen concept. And boy, do they deliver! Its menu provides all you want in a Spanish lunch and dinner, ranging from tapas options such as Ibérico Chorizo, Confit Potatoes & Soft Eggs (S$24++) to Confit Mushroom with Smoked Pancetta & Celeriac Puree (S$26++), and even familiar paella options like Seafood (S$42++) and Pork Sausage & Mushroom (S$42++).

You’ll be thinking of the hills at Guadarrama with every bite! Some of these combinations include Smoked Japanese Mackerel, Corn Tuile, Escalivada (S$7++), and Sea Urchin Toast: Murasaki Uni, Burrata and Avruga caviar (S$18++). Those looking to fill their tummy can opt for other options such as Grilled Spanish Octopus (S$36++) or Axuria Milk-Fed Lamb Shoulder (S$32++).

From the looks of it, there seem to be many claiming to provide an authentic Spanish restaurant experience. Binomio definitely has a greater stake in that, with its menu changing at least four times a year depending on what seasonal ingredients are available at that time. Apart from the classic Spanish dishes, Binomio also offers interesting twists to some of its tapas dishes.

Some of the tapas options include Seared foie gras and scallops, glazed with sherry vinegar and brioche (S$34++) and Steam mussels and saffron white wine sauce (S$30++).

As Binomio changes its menu frequently, it’s best to check its website for the latest menu.

With nearly all Spanish restaurants offering tapas and paella, Asador takes its Spanish cuisine a level up by offering regional specialities— in this case, it would be Cochinillo, a roasted suckling pig most famously related to the Spanish city of Segovia. Tradition has it that the suckling pig would be so tender that a plate is used to cut it next to the guests!

Asador’s Cochinillo (S$118/S$208++) is imported from the same region. After being brined, it is cooked in their handmade stone oven which results in a golden and crispy finish. There are also other Spanish meat-based options such as Cerdo Iberico (S$48++) and Chuletas de Cordero (S$56++).

Remember to get sides such as Roasted Potatoes (S$13++) and Piquillo Peppers (S$14++) to accompany your meats! With pasta dishes as well as wild-caught seafood, Micasa Kitchen & Bar has something for everyone! The first thing that hits you when entering My Little Spanish Place would be its rustic and cosy ambience, with warm lighting that creates an inviting look. The brick walls and wood furnishing, along with the Spanish songs played in the background, will surely transport you to Granada. One of its signature dishes is the Pulpo De La Casa (S$38++), which is grilled octopus leg with romesco sauce and saffron potato puree. It also has a myriad of tapas offerings such as Gambas Al Ajillo (S$24++), Almejas Al Vino Blanco (S$19++), and Bravas Caseras Con Manchego (S$14++). Before you ask, no, it’s not related to Bras Basah. Pura Brasa is actually a Spanish restaurant chain that started in Barcelona in 2010 — its Singapore outlet is its seventh location. It was created by Josper, an internationally recognised brand of charcoal ovens. Hence, Pura Brasa’s offerings are based on grills and Josper ovens. The last time we gave Pura Brasa a visit, we were raving about its Josper Grilled Spanish Pork Ribs (S$25/S$45), which is cooked in two stages for nearly 20 hours, as well as the Seafood Paella (S$36/S$55), which was hailed as one of the “Best Paella in Singapore”. You would never expect to go to a museum for Spanish food, but that’s exactly where The Great Mischief is. Seeing how rich the history is behind Spanish cuisine, I guess there’s some correlation. The Great Mischief is one of many restaurants under The Black Hole Group, which runs other popular brands such as Tipo and Working Title Burger Bar. The menu is separated between lunch and dinner and is inspired by Catalan flavours. The lunch menu has options such as Po Po (S$20), which is octopus salad with cucumber, olives, parsley and house dress, and Fetamelon Salad (S$16), a watermelon and feta salad with spanish onions, radish and mint. Its dinner menu boasts more familiar options such as Valenciana (S$46), which is paella with roasted chicken and beef chorizo.

Oh, and did I mention that it’s also Muslim-owned? La Taperia is a Spanish restaurant from the award-winning Les Amis Group and opened in October 2014. It aims to offer a holistic dining experience with sizzling Spanish signatures in a spirited atmosphere, without fronting any gimmicks or celebrity chefs. It has all you could ever ask for in a good Spanish restaurant: from cold to warm tapas like the Capricho De Santona (S$18++) and Gambas Al Ajillo (S$22++), as well as the usual paella options, namely Chorizo Y Pollo (S$30++) and Paella Negra De Marisco (S$32++). There are even desserts such as Churros Con Chocolate (S$14++)!

And yes, churros are of Spanish origins.

In a time when fusion menu items cause more confusion than delight, ASPA has found a successful formula. The name ASPA was derived from the words, ‘Asian’, ‘Spanish’, and ‘taPAs’, essentially making it known that the restaurant combines the flavours of traditional Spanish food with Asian ingredients. 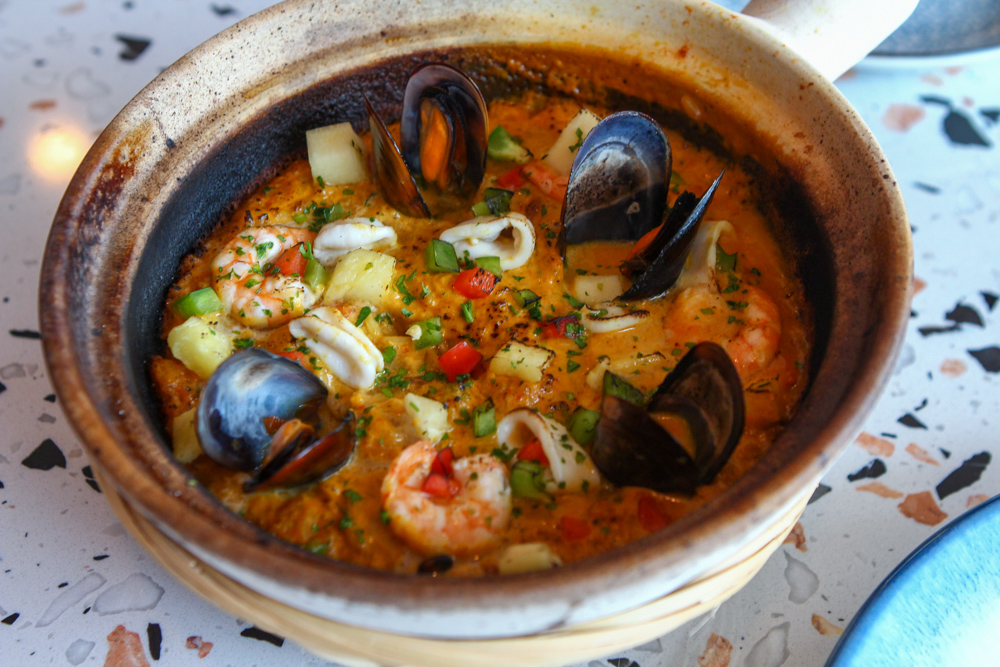 Some of these fusion creations include Masak Lemak Chilli Api Paella (S$28), which is combination of the Spanish paella with familiar Malay flavours. As an added bonus, all paellas are cooked with claypots which provide a smoky aroma. There’s also Patatas Bravas (S$10), which are crispy potatoes that are drizzled with sambal.

I vote for bak kut teh-filled chorizos next!