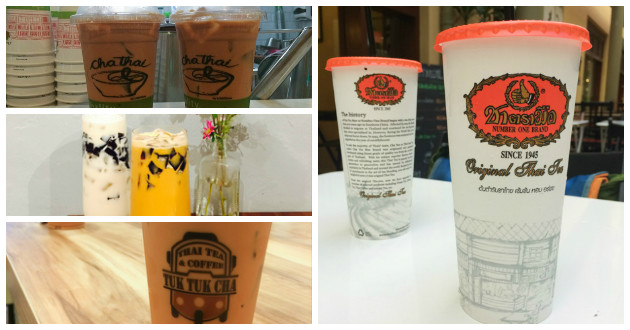 Cha Yen ชาเย็น, commonly known as Thai Ice Milk Tea, is not new to Singaporeans. This tea is typically made from a strong brewed Ceylon tea with added yellow food colouring for that distinct bright orange color. In recent times, a local variant of assam tea is also used instead of the higher priced Ceylon.

This chilled Thai tea comes with sugar and condensed milk and served chilled or with ice. Evaporated milk, coconut milk or whole milk is generally poured over the tea right before serving to give a layered appearance internationally, but it’s really all just blended together when ordering in Thailand.

With the ever-sweltering weather beating down on Singapore, what usually comes to our mind to combat the heat? That’s right, a cup of cold and satisfying Milk Tea!

Oh, I absolutely love this drink too. But it’s really hard to find good ones here, so here are my favourite few. 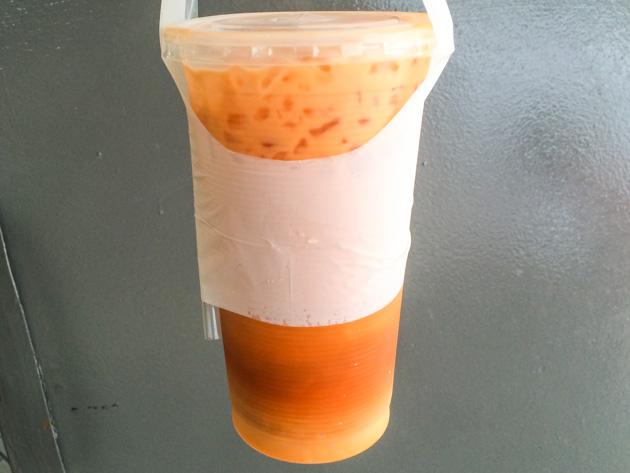 You can get this decent tasting Thai Iced Milk Tea at just $1.50 (Whoaaaaa, cheap right?) at level one of Golden Mile. I reckon that for a chance to try authentic thai food/drink, this is the place to go. I tried a couple of Cha Yen from different shops in Golden Mile, and this is one of my favourites here.

The drink is built on the spot upon ordering like at a Kopitiam instead of being pre-mixed like some shops. Did I mentioned the cup was filled with 90% ice? Hmm, cheap so can’t really complain about that. Creamy rich taste of milk, sweeter than most and has a really smooth texture although gets diluted really fast from all the ice. A slight bitter aftertaste though, big cup, perfect (and cheap) to combat the hot weather. 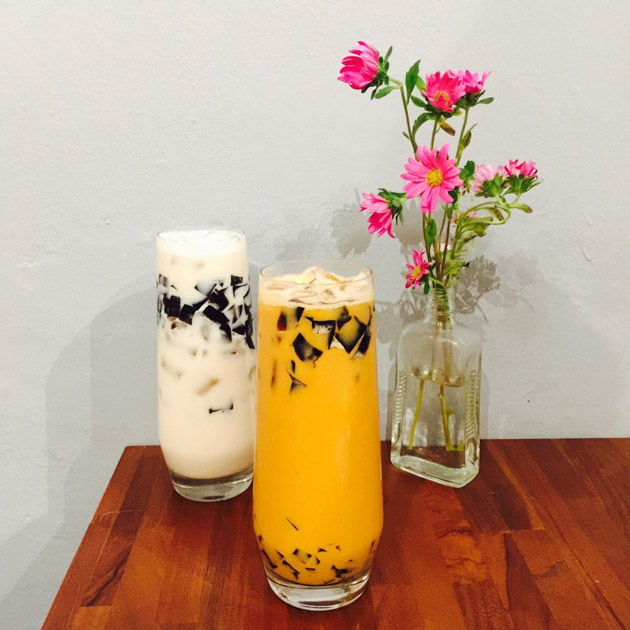 At $3 for takeaway (first picture) and $5 for plain dine-in (second picture), Cafe Pal’s milk tea is one that will suit the preference of most people. The staff were pretty inattentive though and no one really attempted to serve our empty table, despite a few staffs who were free and a relatively empty cafe. Cafe Pal might want to work a little more on their customer service aspect.

Okay, back to to the main reason why we’re here. I’m definitely sold by their $3 takeaway option due to two points: Firstly it being cheaper than many other Thai Ice Milk Tea shops. Secondly, the portion was just nice for one person, as I could not finish the dine-in glass during my other visit. Their milk tea was smoothly sweet but not overly so. They also offer add-ons like aloe vera and grass jelly. 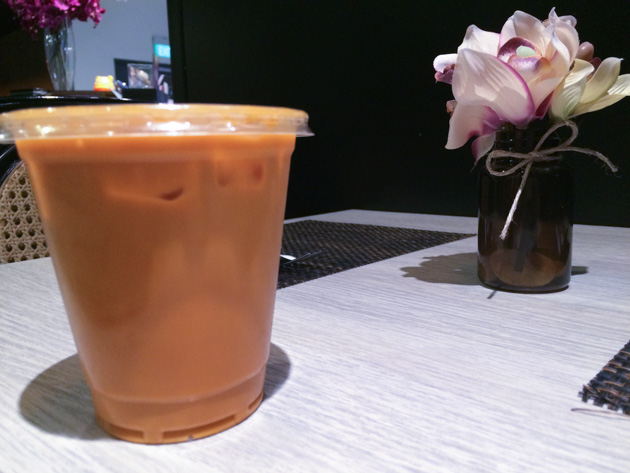 For $6.30 at Nara Thai, it’s really steep for a drink like this and for its size. Hold on, well, you can’t blame Nara Thai since it’s located in the heart of town and Nara Thai does have a certain branding. But this is probably the most decent as you can get in Orchard, if the craving kicks in while you’re shopping.

There is a good balance between the milk and tea ratio. Relatively sweet to me, one can get a little too sick of the drink after awhile. But I guess the good thing about the small portion is that it gives you that strong tea kick and without having to waste any. Easy to drink, and a small but potent Thai Milk tea. Nam’s serves their Thai Tea ($2.80) in a tall, red capped cup. For tea, they are using the Cha Tra Mue Number One Brand, which is also used as the based design for their to-go cups. The shop at Far East Square could be a little hard to locate as it is well hidden in one of their alley-like lanes.

Nam’s Thai Milk Tea has a stronger tea taste than average – milk seemed much lesser but was fragrant enough though. Ice to thai tea ratio was 1:1, therefore the drink isn’t too cold for (my) sensitive teeth to take. However after awhile as the ice melts, the tea only becomes stronger and the milk becomes quite an afterthought. Texture was a little rough and a has slight bitter aftertaste. There’s also an ice blended  ($4.20) version too. 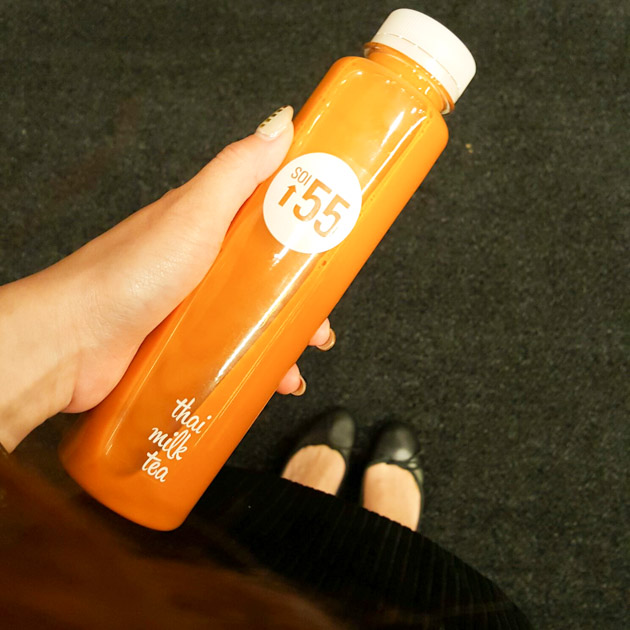 Soi 55 has a really modern looking bottle (kinda like a detox juice bottle) for their Thai Milk Tea ($3.90). The Stall is located in a hawker centre, popular amongst many working adults as it’s just a short distance from the Central Business District area. Lunchtime sees crowds at this stall, to get themselves a cup of their tasty milk tea.

Milk tea is a little thicker and not as diluted like most we find outside since there’s a lack of ice as well. Sweetness level considered low if you ask someone with a sweet tooth. The orangey-brown coloured milk stole the hearts of many, including mine. 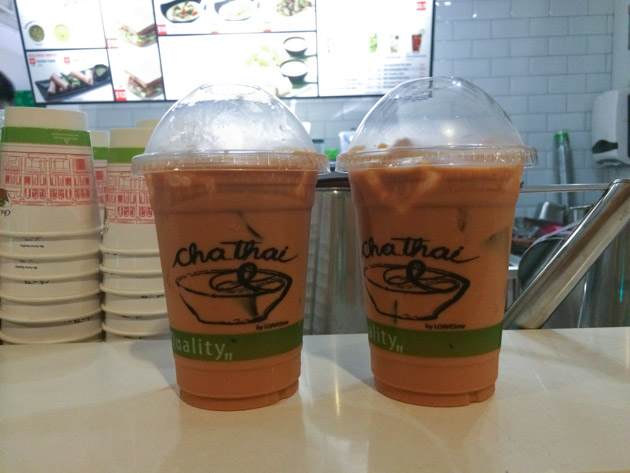 At $3.90 per Thai Ice Milk Tea, Cha Thai has one of the friendliest service. Located right opposite the road as you leave Exit A of Telok Ayer MRT Station, it is really accessible. When I visited the outlet, Cha Tai was about to close but they still made the effort to get me my milk tea when they were already in the midst of cleaning up. Their attitude really impressed me when they even mentioned a 1 for 1 deal to me before I ordered.

*Just check-in into the Cha Thai venue on Facebook, show it to the staff and you get 1 for 1!

I found that their Thai milk tea was abit too sweet for me. For even a sweet tooth person like me, to say it’s sweet, it must really be. A higher amount of milk used, but could barely could taste the tea though. This is one of those times where it actually tastes much better after the drink gets a little more diluted to reduce the sweetness. Diandin Leluk  is another of my favourite places to grab Thai Ice Milk Tea ($1.80) at in Golden Mile. After trying numerous at the same venue, this emerged as my other favourite in the area.

Really strong astringent, tea taste. It was ready mixed in a jug and just poured into cups of ice upon ordering. Tasted much less sweet for my personal preference, but since it’s so cheap I shall not complain. Just a note, their milk tea contains quite a bit of tea powder residue at the end, giving the drink a little rough texture. 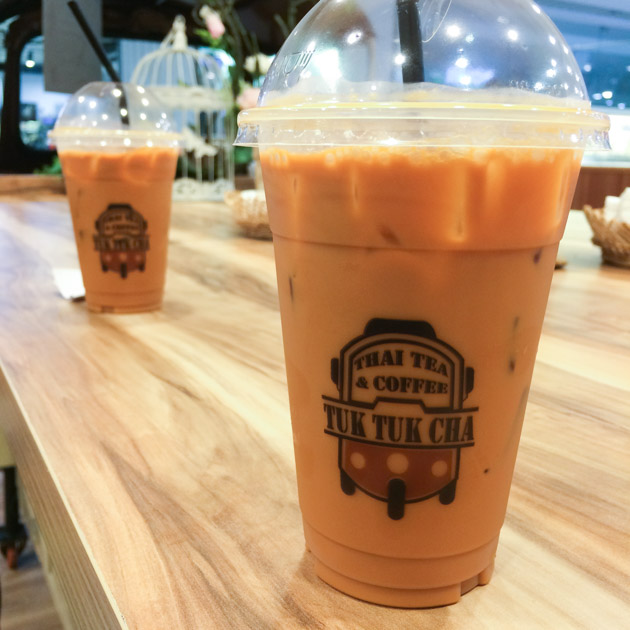 Tuk Tuk Chai is a new Thai Milk Tea outlet opened in Suntec, and also offers additional toppings like coconut jelly nad pearls. Their standard milk tea costs $2.80 for medium size and $3.20 for a large, while other cold drinks are also included.

The Thai Milk tea has 2 versions: the original and reduced sweet version which was really quite bland in sweetness – like it would be good for diabetics kinda bland. For people more accustomed to the sweet tastebuds of Thais, you’ll want to opt for the original version which is pretty well balanced although not that distinct in tea taste.