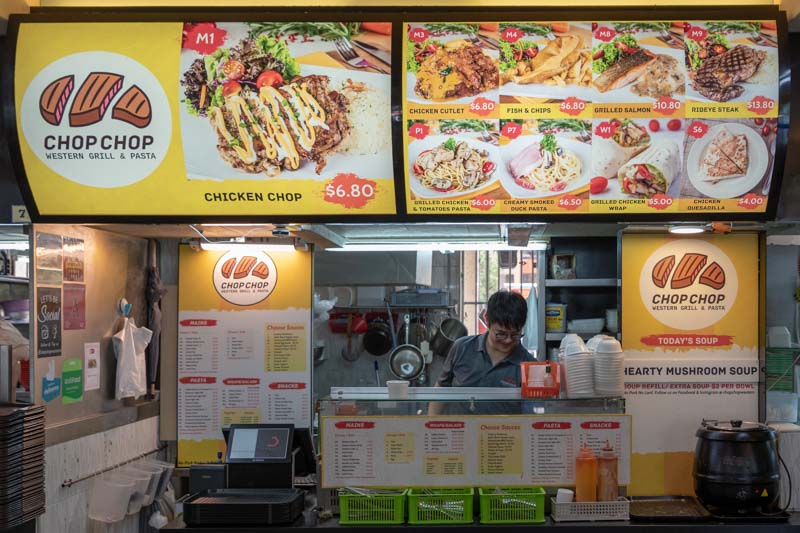 It was started by a trio of friends who met in university while studying Engineering. Isn’t it just inspiring to see young Singaporeans pursuing their passions? 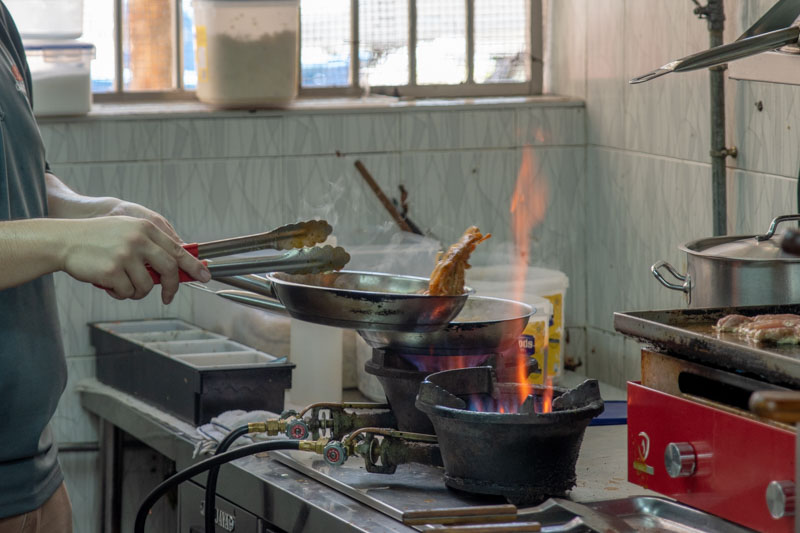 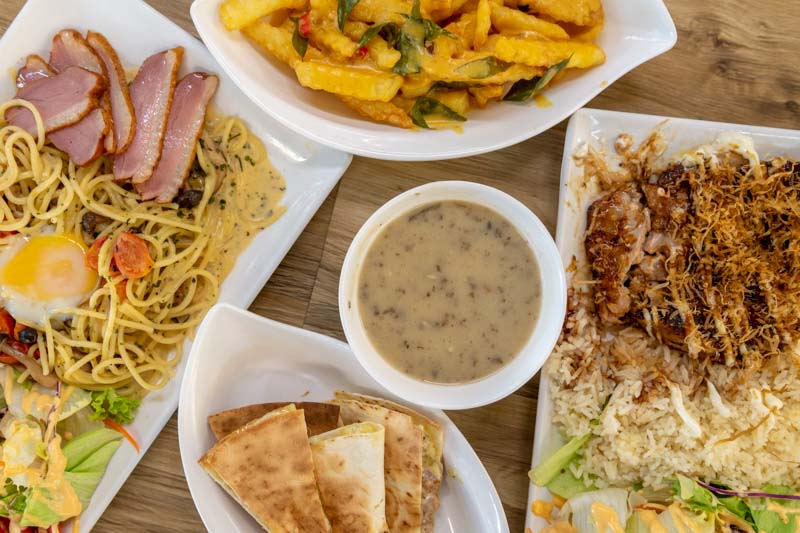 Given their background, I initially had slightly lower expectations for the standard of foods served. But with their super affordable price point, Chop Chop Western Grill & Pasta quickly proved itself to be a solid, value-for-money option for anyone who wants to have good Western food in the Toa Payoh area. 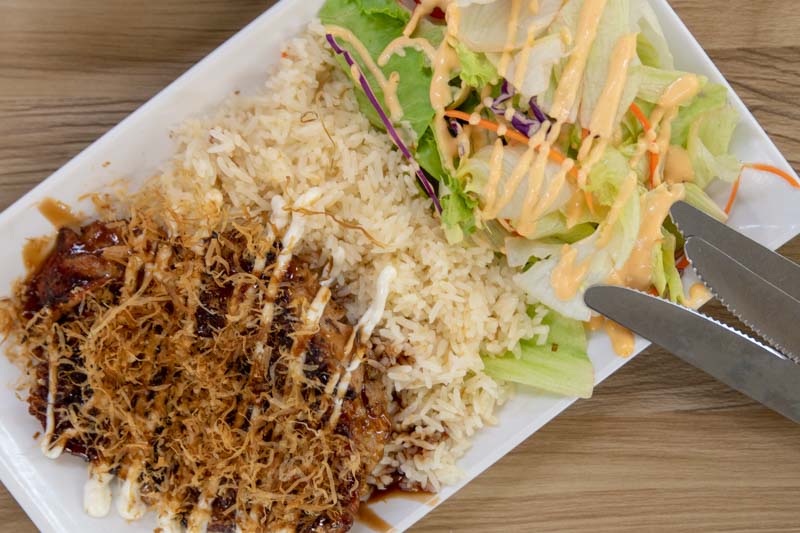 We first tried the Chicken Chop with Takoyaki Sauce (S$7.80), a rather interesting pairing that I was pretty hyped to try.

Luckily, it didn’t disappoint. The sweet and savoury notes from the takoyaki sauce actually paired pretty well with the ever-so-slightly charred chicken chop. Admittedly the chicken wasn’t as tender as I’d liked it to be, but at least it was extremely flavourful. 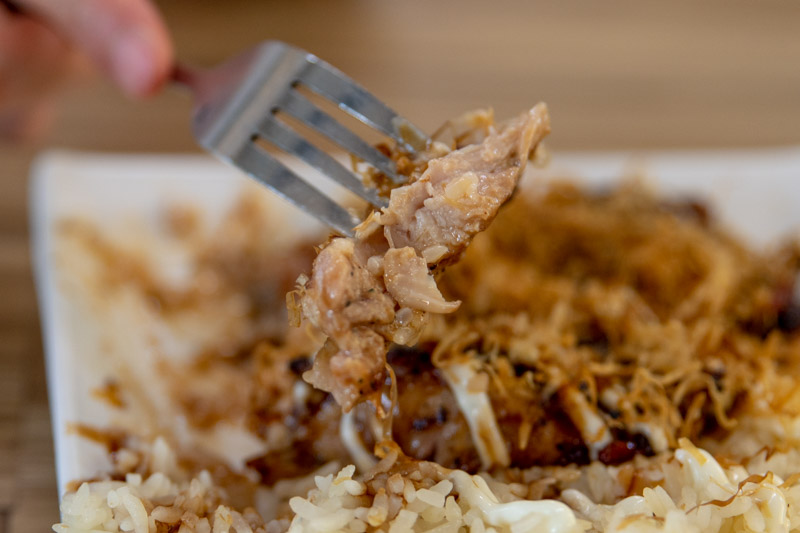 The char gave the chicken chop a little bitterness, but this was countered by the takoyaki sauce. The katsuobushi (dried bonito flakes) imparted saltiness without being overly fishy, and had a very mild smokiness similar to the char of the chicken chop. 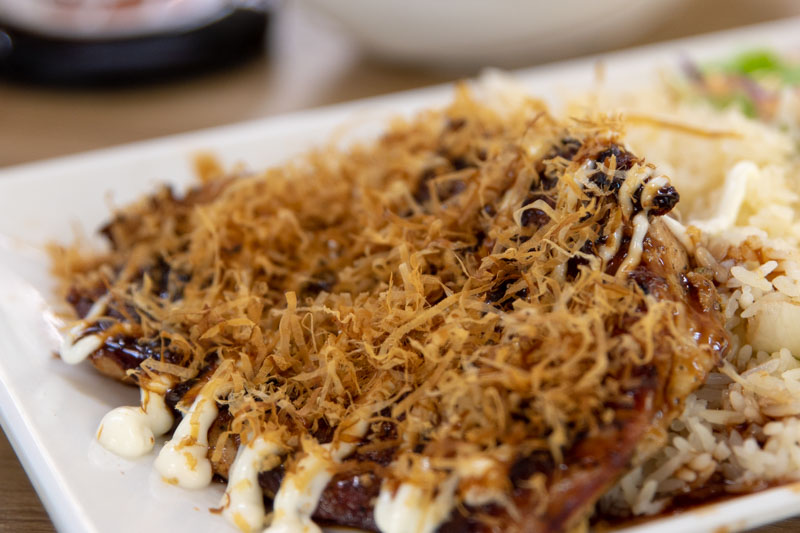 Another added bonus of was that the katsuobushi added flavour to the already tasty rice. The rice from Chop Chop Western Grill & Pasta is definitely one of the better ones out there. It’s neither clumpy nor hard, and infused with a subtle garlicky and gingery aroma.

The katsuobushi also added some smokiness and saltiness. Definitely a unique pairing that I highly recommend!

Even if you don’t necessarily like takoyaki sauce, one of the big selling points of Chop Chop Western Grill and Pasta is their wide selection of sauces to pair with the grilled meats. Sriracha Mayo, Chipotle Aioli and Garlic Yoghurt were amongst the many choices I could pick from — my mouth watered just from thinking about it. We also tried their Fries with Salted Egg Sauce (S$3.50). The fries alone are actually S$2.50, and we added only S$1.00 for the salted egg sauce — you can pick any of the sauces they offer for the fries! To be very honest, I preferred the sauce over the fries themselves. The fries were bought off-the-shelf rather than made in-house, so they were a little dry on the inside while a tad soggy on the outside. On the other hand, the salted egg sauce was a deep, rich orange and maintained the perfect balance of creaminess and oiliness. It was grainy in texture (which usually is the mark of exceptionally good salted egg sauces) which contributed to an amazing mouthfeel.

My favourite part of this dish was the little bits of chopped chilli added, which gave a great spicy kick to the sauce. I could see myself munching on anything slathered in this sauce, so be sure not to miss out on it! 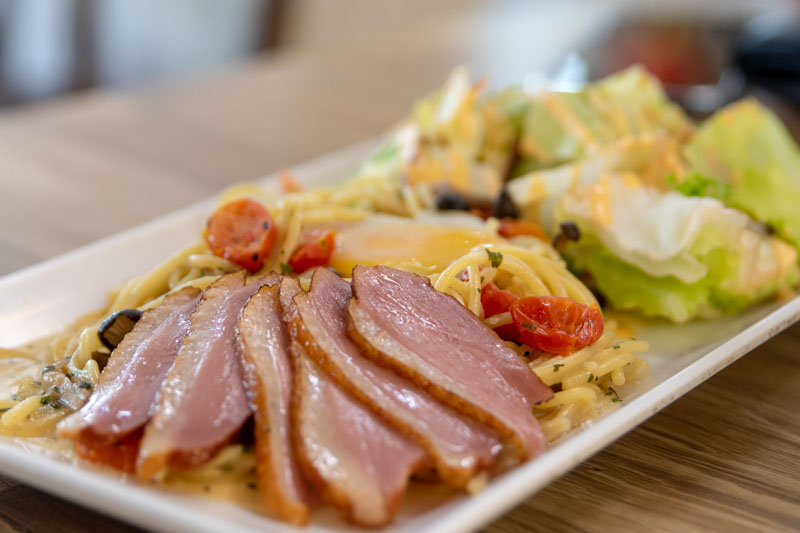 We couldn’t miss out on the pastas offered at Chop Chop Western Grill & Pasta. We ordered the Creamy Smoked Duck (S$6.50), which the chef recommended to us. 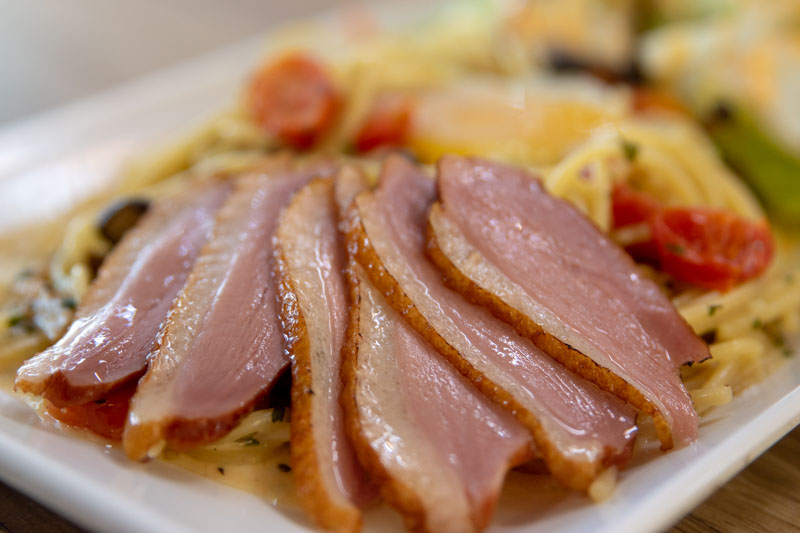 The duck certainly was flavourful, and had a nice layer of fatty meat which provided diversity in texture. The tougher, more flavourful meat was slightly overcooked but still paired nicely with the more gelatinous fatty tissue. I really liked the pasta itself. It wasn’t overly creamy such that I risked staining my shirt, but still maintained that milky smoothness that suggested at full fat cream being used. The pasta was cooked well too, with a little bite and firmness to it which went nicely with the creamy sauce.

If there were any areas for improvement, it would be the vegetables. The tomatoes and lettuce were not as fresh and crisp as I’d prefer them to be — the lettuce was slightly wilted and the tomatoes were soggy, which took away from the eating experience. 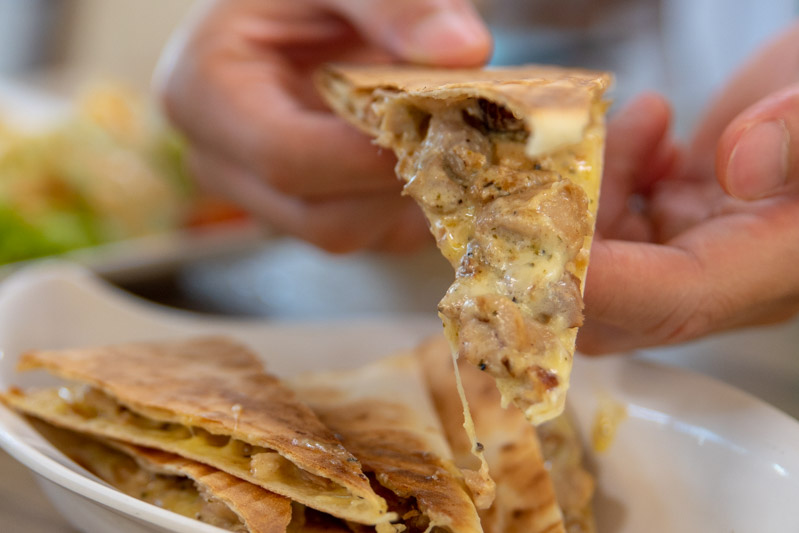 We also tried the Chicken Quesadilla (S$4.00), even though it might not look as appetising as the other items on the menu. I was pleasantly surprised when I took a bite and the sharp flavour from the melted cheese and the sweet chunks of chicken burst in my mouth. Paired with a toasted, crispy shell, this dish definitely would go well with some beer.

If you thought that the prices at Chop Chop Western Grill & Pasta were good, then we have even better news for you. All mains come with one side, one salad and a bowl of soup to complete the meal! The soups change on a rotational basis.

When we went down, we had the Hearty Mushroom Soup. Chop Chop Western Grill and Pasta changes the soups on a regular basis, including Creamy Minestrone, Creamy Capsicum, as well as Prawn. 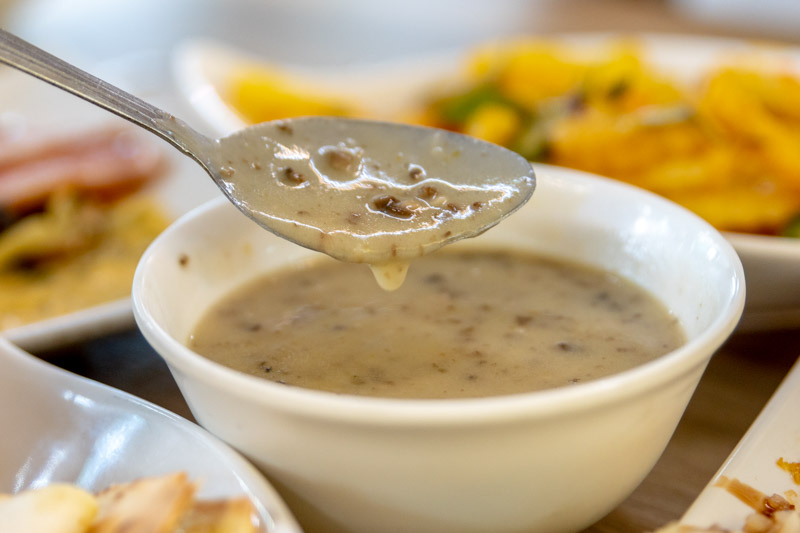 The Hearty Mushroom Soup we had was not watery at all, and the chunks of diced mushrooms really intensified the flavour while adding to the texture of the soup. I personally feel that the soup was well-executed. I was quite full after my meal, but there was the option to refill the soup for an additional S$2.00.

Chop Chop Western Grill & Pasta definitely establishes itself as a wallet-friendly option for unpretentious yet decent western cuisine. Besides, it’s started by young entrepreneurs, which makes me want to support it even more!

My favourite item on the menu isn’t any particular dish, but rather the salted egg sauce. Creamy and boasting a grainy texture, it’s one of the best I’ve tried so far, particularly at this price point.

If I had to pick a favourite dish though, it would be the Chicken Chop with Takoyaki Sauce. The chicken was tender and juicy, and the takoyaki sauce and dried bonito flakes paired really nicely with the chicken and rice.

If you’re ever in the Toa Payoh area, you’ll definitely want to try this place at least once. If you stay in the East, there’s also another outlet in Bedok for your convenience.