You might have seen the over-the-top, whimsical-looking milkshakes from Capitol Milk Bar, which is located at Arcade @ Capitol Kempinski. If you walk just a few rows down, you’ll chance upon Frieda Restaurant, which serves up German cuisine with an Austrian influence. The restaurant is named after Frieda, the daughter of the founder of Kempinski Hotels. 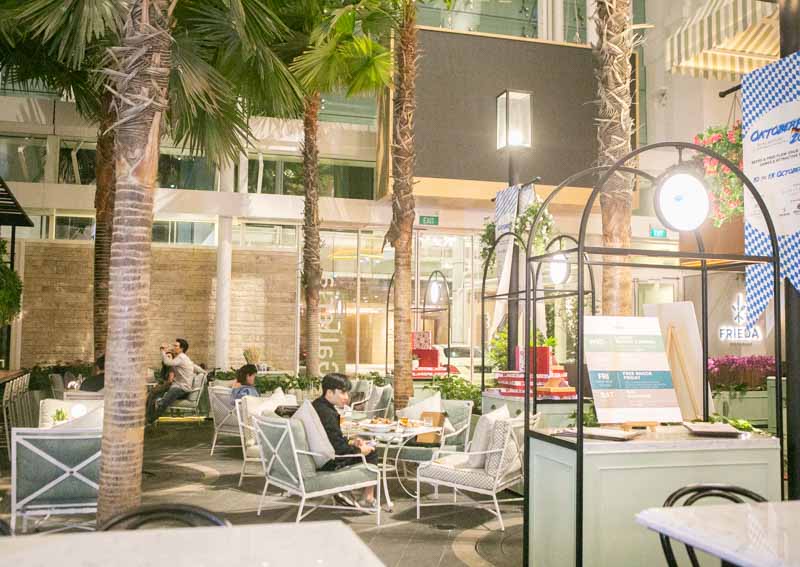 Despite the swanky setting, the restaurant’s garden-themed seating area still has a cosy and homely vibe. 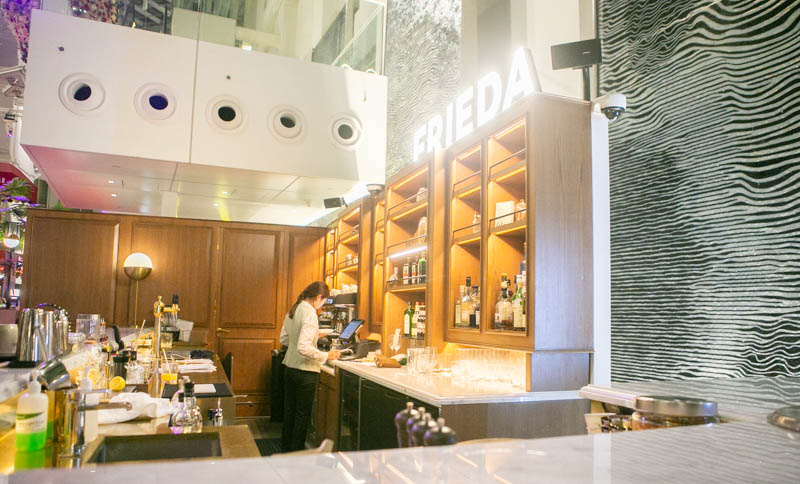 There is also a bar counter for guests to enjoy some German beer or liquor. For a more intimate setting, you can enjoy a meal at their dining room. After we settled into our seats, we were given a tray of sourdough bread slices, which helped to kickstart our appetite. My dining companion is on a sobriety streak, so he was pleasantly surprised to find out that the menu offers non-alcoholic beer like the Hefe-Weißbier Non-Alcoholic (S$7).

Alternatively, you can go for their Schneider Weisse (Non-Alcoholic), which is slightly pricier at S$10. Before we began our German feast, we whetted our appetites with the vegetarian Frieda’s Salad with Caramelised Goat Cheese With Rosemary Honey (S$17/half portion, S$25/full portion).

The vinaigrette woke up our tastebuds with the right amount of acidity and sourness. There was a good dressing-to-salad ratio, which allowed the vegetables to retain a refreshing crunch without getting too soggy from the dressing.

The goat cheese was earthy and pungent, and while it is an acquired taste, it gave the salad some additional dimension. You can’t dine at a German restaurant without trying schnitzel, so we ordered the Traditional Veal Wiener Schnitzel With Potato Cucumber Salad And Cranberry Sauce (S$22/half portion, S$37/full portion). Essentially, the veal is pounded thin, breaded and then fried, which gives the skin that nice golden crisp.

I found the meat to be tender, but I thought it could have used a bit more juiciness. Since the meat can be quite bland on its own, squeezing some lemon juice over it added a zesty kick. 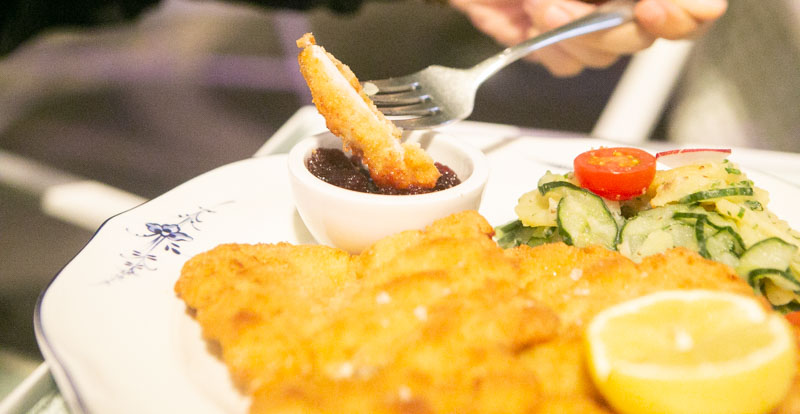 To combat the dryness of the meat, try dipping it in some cranberry sauce (which also glazed it with a slight sweetness).

Between bites of the schnitzel, the potato cucumber salad really helped to refresh my palate. The salad dressing was tangy and salty, and reminded me slightly of pickled vegetables. 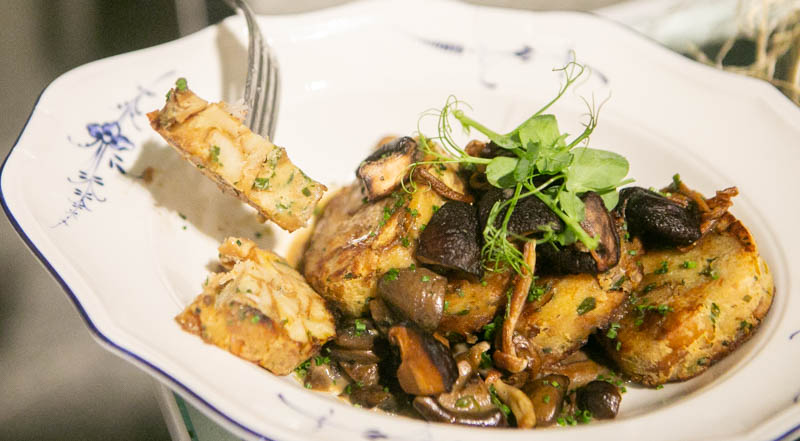 The next recommended dish to order is the Pretzel Dumplings With Creamy Mushroom Ragout And Spring Onions (S$15/half portion, S$26/full portion).

The dumplings held their shape nicely, and were slightly crispy on the outside while soft on the inside. I did find them to be fairly plain tasting though, and the starchiness did get too much after a piece or two. But, a bite of the mushrooms not only provided some umami flavour, but also helped to act as a palate cleanser. 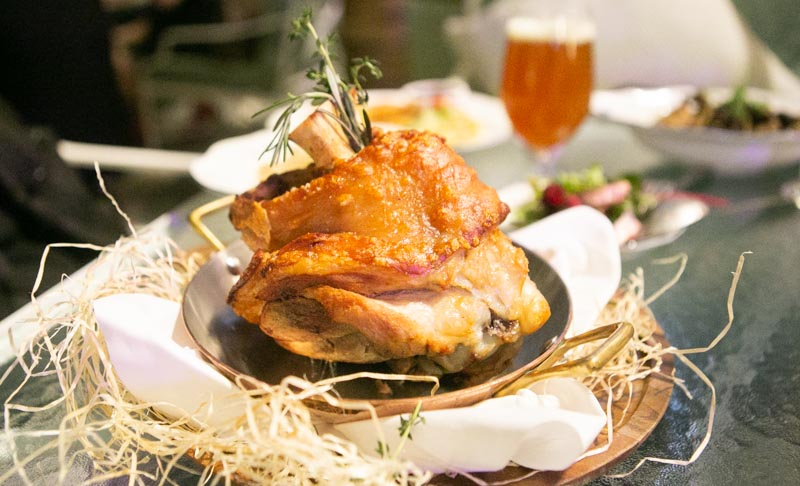 Another must-try at German restaurants is the Oven Roasted Pork Knuckle Beerjus, Sauerkraut And Pretzel Dumpling (S$49). Eating this yourself can be a challenge, so perhaps get one or two people to share this with. 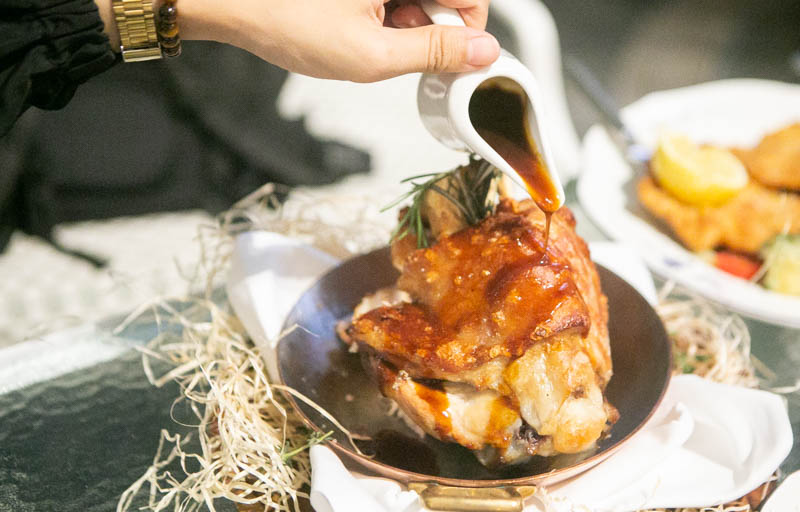 I thought the pork knuckle was a tad dry, probably from being roasted, so the accompanying sauce provided some much-needed glaze. I would suggest saving some sauce to pour over the meat, since the skin doesn’t absorb much of it. It took quite a bit of effort for us to slice up the pork knuckle because of all the tendons and fat, so we recommend getting the chef to cut it up for you. The fattiness added tons of flavour and a creamier mouthfeel to the meat, but I thought it was a bit too gelatinous.

I didn’t enjoy the meat much, because I found it to be a tad tough. I did enjoy the skin though, which was crispy with that smoky flavour that reminded me of sio bak. 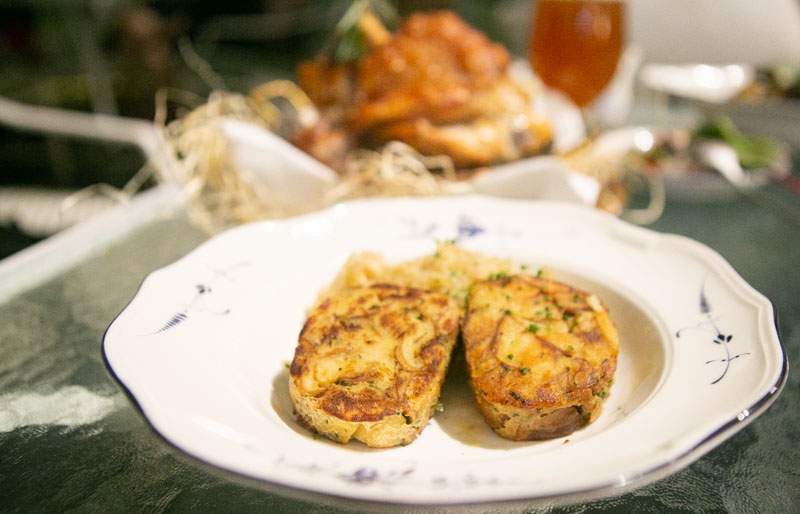 Eating the pork knuckle on its own can be a daunting task, so I was glad that it came with a side of pretzel dumplings together with sauerkraut. The latter, which is German pickled cabbage, provided a vinegar-like sourness which helped to slice through the fattiness of the pork.

I would have preferred a different side dish instead of the pretzel dumplings which can be quite dense, since I was feeling stuffed just from the pork knuckle. Despite its appetising appearance, we were disappointed to find out that the beef was rubbery and fairly difficult to slice into. The texture of the meat was tougher than we would have liked, though it was still chewy. Another thing we noticed was that the beef had an inconsistent level of doneness, with some areas still pink and some well-done.

Luckily, the sides fared better than the main dish. I enjoyed the potatoes, which were chunky but tender with a fragrant herb flavour. The beetroot, on the other hand, was soft and added a kick of sourness. 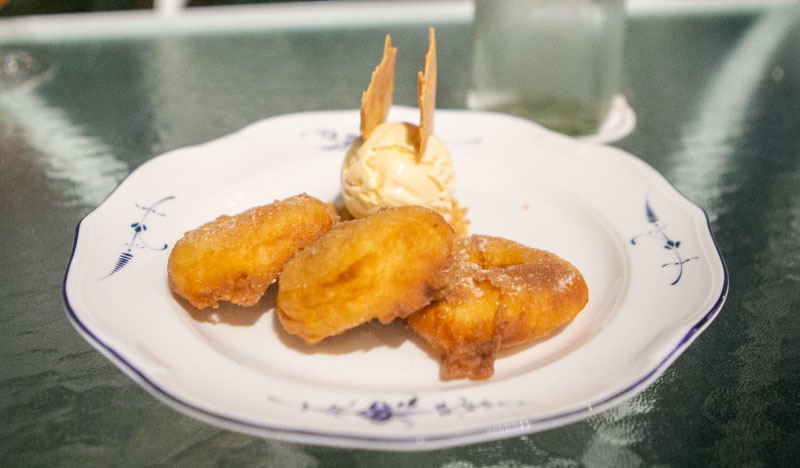 Thankfully, we ended our night on a sweet note with some Applefritters (S$12), which did not disappoint. The traditional German dessert was served warm, and had a satisfying crunch when I bit into it.

The cinnamon-sugar coating added a nice touch of sweetness to the crispy fried batter, and reminded me fondly of churros. The batter was soft on the inside, and the apple slices were firm but easy to bite into. The honey-like sweetness from the fruit made for a nice change from the savouriness of the previous main courses.

The cold, refreshing vanilla ice cream was also the perfect addition to the warm fritters, and its light but sweet flavour did not overpower the cinnamon sugar. Definitely a simple yet comforting dessert to end off the night with!

While I don’t think I’ll order the pork knuckle and beef brisket if I make a second visit to Frieda Restaurant, I think the schnitzel, pretzel dumplings and apple fritters are good options to go for if you want to experience German favourites.

Apart from that, I think the prices are not overly exorbitant, even though the restaurant falls into the casual fine-dining category. Definitely a place you should consider if you have any upcoming special occasions!