Is Hari Raya Cancelled?: The Impact Of COVID-19 on SG’s Aidilfitri Celebrations

It’s that time of the year for Muslims all around the world to practice their annual fasting ritual, according to the Islamic calendar.

As fasting is one of the five pillars of their faith, it’s no surprise that the news of this year’s Geylang Serai Bazaar being cancelled was met with groans of disappointment and an understandable feeling of despondence. 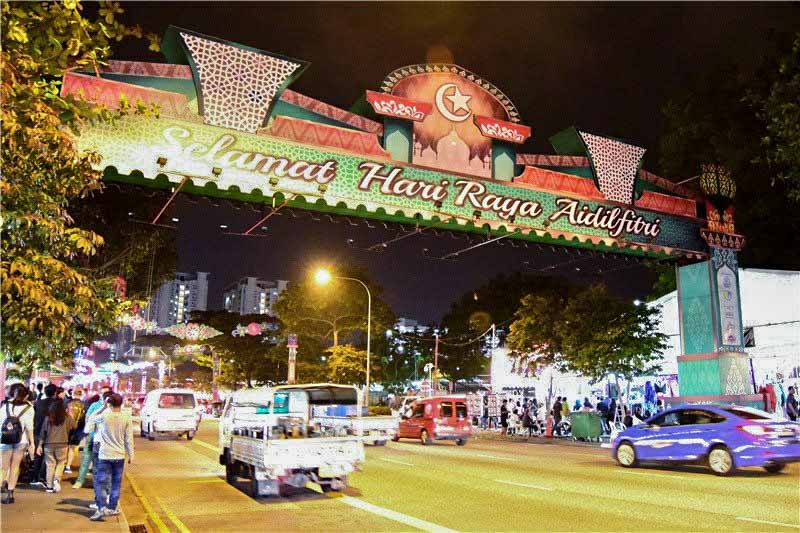 The bazaar itself has always been monumental, given that it marks the beginning of the spiritual month of Ramadhan, which then culminates in another month-long celebration of feasting, forgiveness, and family bonding. However, with the peak of the pandemic upon us, it translates into a drastic drop for businesses which religiously rent out a stall space at the bazaar.

Aside from the economic slump, regular patrons of the bazaar have also chimed in to comment on how the absence of the annual event will affect the jovial spirit that comes along with purchasing food for breaking fast, with buying household decorations for Hari Raya Aidilfitri, as well as the simple notion of gathering with family and friends to catch-up after a whole day of fasting.

As a result, Ramadhan and Hari Raya e-bazaars have been set-up to facilitate these businesses, and there are even Facebook groups to direct anxious consumers to their favourite vendors so they won’t have to go through the holy month without their favourite food, snacks, and home furnishings.

The recorded attendance number for 2019’s Geylang Serai Bazaar was astounding—with 2 million visitors from all over Singapore attending this mega event. As Minister for National Development, Lawrence Wong, put it, “Over the years it has evolved and developed, not just into a place for the Malay community, but also a vibrant community space that reflects our multi-racial and our multi-religious heritage and culture and society”. 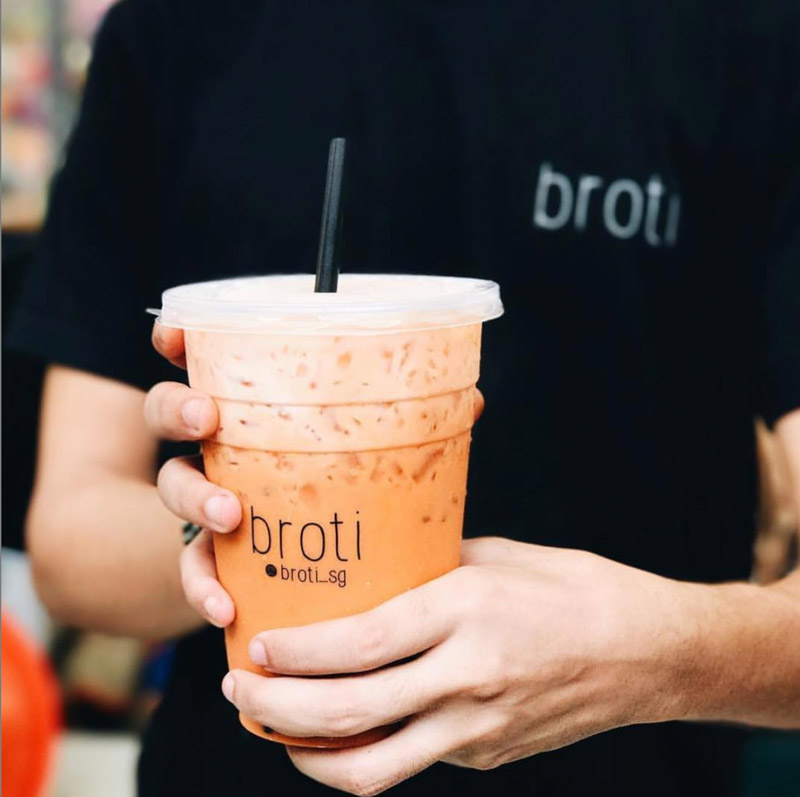 I’m sure many of our non-Muslim friends and neighbours have exhibited excitement about visiting the Geylang Serai Bazaar, either for social reasons or simply to marvel at the hundreds of F&B and retail offerings on display. Whatever the appeal may be, it is this enthusiasm that enables hundreds of vendors’ business to thrive during the season.

Speaking with Broti SG founder, Syed Uzair, it is clear as day that the cancellation of the bazaar doesn’t only impact the fasting month’s sales, but the decline started even before the ‘Circuit Breaker’ measures were put in place.

“We were forced to closed multiple outlets at our night markets (pasar malam) and a few events that were scheduled prior to COVID-19 had to be cancelled. With this, sales for us have decreased by more than 50% and it’s worrying to not know how long this will go on,” Syed elaborates.

He goes on to share his concern for his employees as well, given his business is heavily reliant on manpower—much like most F&B business, “I also pity 30 of my staff who have dedicated their time working for me. I’m sure the outbreak has also placed a toll on them financially.”

Even the retail sector for bazaar businesses isn’t spared, even though many of them already have an online presence when not setting up a physical pop-up shop. Suhana Ab, founder and Creative Director of MaisonQ (a purveyor of children’s apparel), has had to cut costs in order for her company to stay afloat.

“We are at 12 points of sale in Singapore and (have) four in Malaysia, and unfortunately they all have had to cease operations during this ‘Circuit Breaker’/’Movement Control Order’ respectively. With this, any form of revenue, no matter how little it is during this crazy period, has gone to near zero. No shops open equals no revenue,” she explains melancholically.

They also happen to run their own workshop in Indonesia and the team there depends on MaisonQ’s success for their livelihood. Since feeling the full repercussions of the pandemic, they’ve had to slow down their production capacity by more than 70% as well as no-work days.

In fact, preparing for the month-long bazaar takes months of prior planning, which many may not realise. Abdul Hakam, co-owner of O’Braim, reveals the losses that the company has suffered apart from simply labour hours and cost of goods, “We were planning to take part in the Tampines MRT bazaar, Woodlands MRT bazaar and Geylang Bazaar this year, but now (it) all has been cancelled.

We took three months to prepare for this year’s Ramadhan bazaars as we needed to employ and train part-timers, create new and creative menus and design new banners, (as well as) online content to be posted throughout this year’s Ramadhan period. We have also stocked up on a lot of goods for all the events, but now we have a lot of unused goods,” he laments.

However, ultimately, all three business owners accept and understand the measures implemented needed to happen, in order for the infection numbers to dwindle as well as to protect the public’s and their staff’s health.

But why exactly are festivals in religion considered so sacred, apart from its given ties to the faith? A few possible, but key, reasons could be that it helps us to keep connected to our roots, our culture, our values, our origin, and to preserve it, as much as it helps us forget all the chaos of life.

In fact, it’s a time to embrace and rejoice in all the hard work done in the past and to celebrate its rewards and fruits, as well as maintain a strong sense of nostalgia of past celebrations from years before, and carry on family traditions that could possibly be generations-old.

So, it isn’t a huge surprise for me to hear that the heaviest sentiment from all around is that the spirit of the celebration will vanish as the social aspect is now no longer a possibility. To provide a quick run-down of what occurs on the first of Hari Raya: families traditionally celebrate with members who stay under the same household first, share a home-cooked traditional meal together, and then seek forgiveness from elders.

The rest of the day entails house-visiting, starting with the eldest—most likely the matriarch and/or patriarch—in the family and branching out to visit extended family as the day goes on. It is this congregation and liveliness that most will have a longing for, especially since it’s just been announced that the ‘Circuit Breaker’ will be extended till 1 June 2020.

Syakir, an avid annual visitor to Geylang Serai Bazaar, always looks forward to being a spectator of the flashing lights and eager hawking skills of vendors, and he always goes with the same groups of friends. To him, it’s more than just a means to purchasing goods meant for the festive period; it’s a ritual that has gone on for years that is not to be observed for the first time in his life.

“Ramadhan has always been a humbling experience, and before, there were still options to celebrate breaking fast with good food and friends. Now, it’ll be more a solemn observation of rituals without the gratification of a good buka (break fast),” he adds.

Much like any festivity, the spirit of the occasion stems from its experiential aspect, which is something that Shah, an Indian-Muslim, who has lived in Singapore for several years, highlights, “(The) Ramadhan Bazaar is not only about food; it’s a wholesome experience for the family, tourists, and expats like us, ranging from food, fashion, to kids’ play area.” He believes the essence of Hari Raya will remain, however, he will definitely miss meeting new people in the mosque and the communal dining that takes place.

With Singapore’s upcoming Hari Raya celebrations being only mildly marred by the cancellation of the biggest bazaar—and still allowing vendors to push for sales via various online channels—I suppose we can count our blessings that our government hasn’t decided to put in place extreme measures like in Malaysia, where essential travel is limited to a 10km radius from one’s residency.

With e-bazaars expected to drum up business for the vendors affected by the cancellation of physical bazaars, there still remains a glimmer of happiness for those longing for their kueh fix. The restrictions put in place also allow some devout families to strengthen their bond by praying at home together instead of heading to the nightly tarawih (additional ritual prayers performed at night) prayers during the fasting month.

As Ikram Zainy, Director of PR & Communications at The Outsiders Co., clarifies, “It is important to understand that Ramadhan is ultimately a religious and spiritual month and the closure of the Ramadhan bazaar(s) islandwide should not impact the spirit of this holy month. The closure of the mosques serves a bigger impact as this means that we, Muslims, are not able to come together at the mosques and perform large congregational prayers.”

But certainly, as he goes on to say, it doesn’t prevent Muslims from serving their religious duties from the safe confines of their homes, and might even prove to be less distracting, given the lack of external interactions.

My personal stance doesn’t necessarily matter, given that although I am a Muslim myself, I don’t observe the religious practices of Ramadhan and its related protocols. But I completely sympathise with those who feel like a heavy cloud of sombreness has now reigned over the fasting month and Aidilfitri. Personally, I will miss the traditional dishes that I allow myself to indulge in once a year, and the ceremonial process of wearing a full face of make-up and donning a new baju kurung on the first day of Hari Raya.

This feeling of saudade (deep emotional state of nostalgic or profound melancholic longing) is succinctly expressed by Syed, “I think we will miss simple things like shaking our parents’ hands or our loved ones, visiting relatives’ house till late (at) night, and basically the spirit of togetherness. It’s these things that we take for granted sometimes, and I hope one day when we come out of this pandemic, we will all grow to be a kinder and loving community.”