Hive by Wala Wala: Massive Bar and Restaurant in Singapore where the Buzz’s at 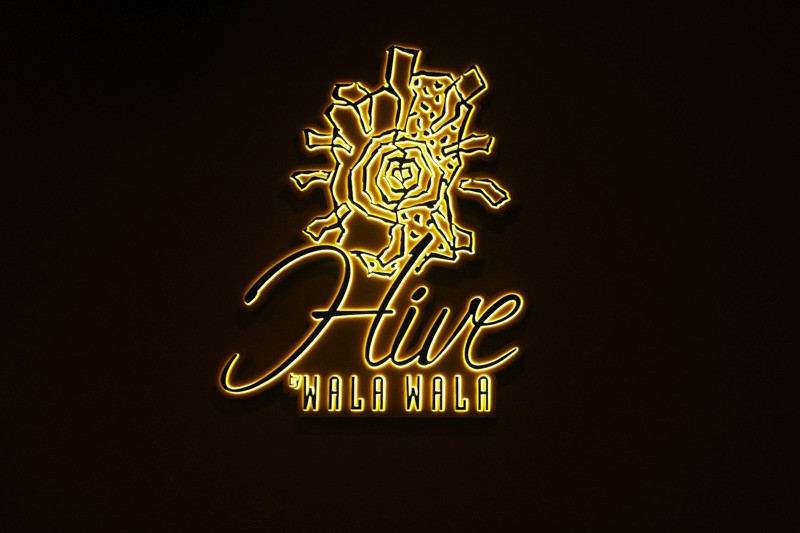 Most who frequent Holland Village for late-night drinks are familiar with Wala Wala, the brainchild of Mr. Stanley Yeo and a well-liked pub in the hubbub of Holland Village. This March, however, Hive by Wala Wala, a new bar and restaurant concept birthed from the bowels of HV’s Wala Wala has begun to take center-stage and there’s good reason for commotion! 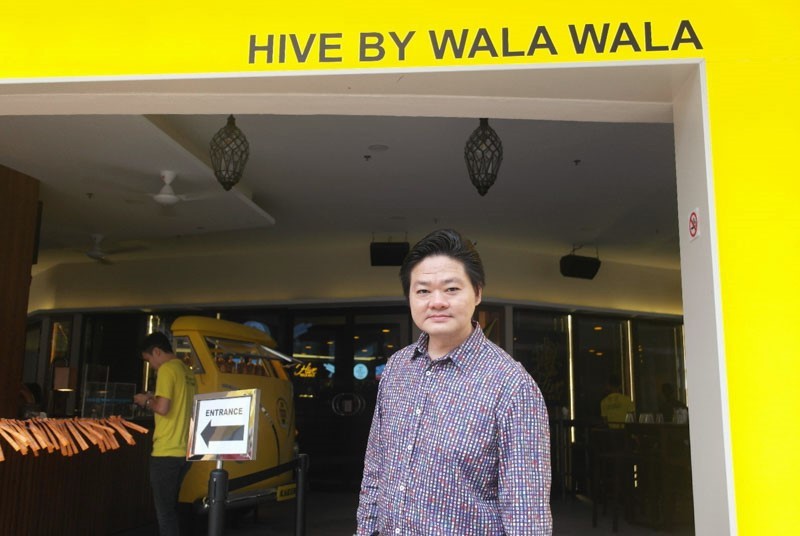 The mastermind behind the Hive by Wala Wala concept is the endearing, seemingly soft-spoken man named Mr. Stanley Yeo, owner of the original bar Wala Wala. Fueled by his mission to diversify and to help others in need, Mr. Yeo has decided to invest in this new project to raise funds for the Make-a-Wish foundation by channeling a portion of the profits from Hive to the organization.

It is evident that long-time-patrons of Mr. Yeo’s original pub Wala Wala have the utmost respect for this rather modest man and most returned warm smiles as he made his rounds through the bustling restaurant on Opening Day. 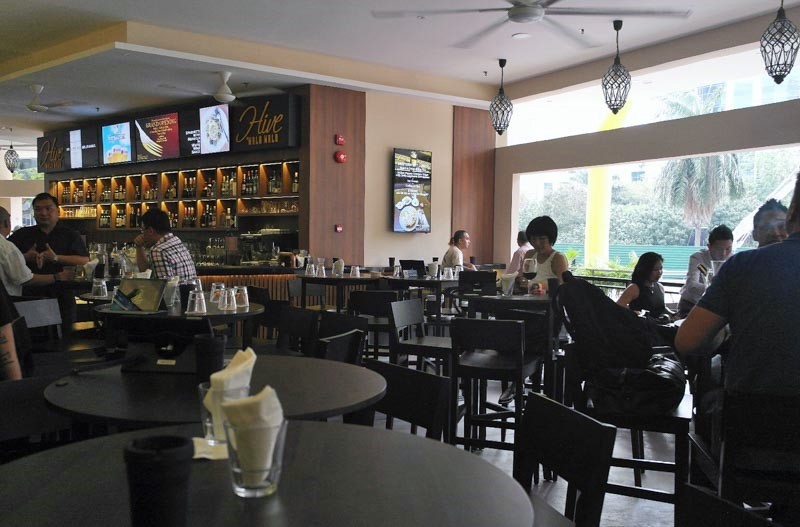 One thing about Hive that greatly impressed me is the fact that the space at this restaurant and bar is really massive. While the place teemed with people, there were still plenty of tables and more, both within the restaurant and outside in the open-air.

If you choose to have your drinks somewhere more airy, you can simply find yourself a wooden high table outside, where the fans work at full-force so any qualms about the sunny weather can be dissipated.

The beauty about having a space so big is that numerous additions can be made to the place with ease. And by that I mean that in the open-air area, Mr. Yeo has included installations like a foosball table and a billard table so if conversation gets slow, you and your friends can hop on over to engage in something more interactive. 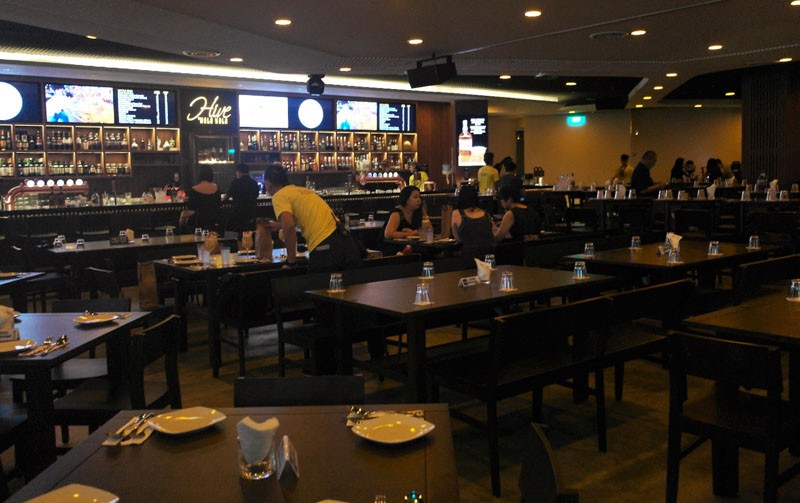 Within the restaurant itself, the numerous well-spaced-out and heavy-set wooden tables assure customers that they have ample room to be mobile and to include everyone at the table. There are several high tables and seats at the counter if you come in smaller groups or pairs and would prefer something more intimate and “snug”. If you happen to be planning a cozy get-together party, Hive has just the thing for you too. Tucked away in one corner of the restaurant is a cushy room with just the right amount of space for you to get the groove on with your friends. With adjustable lighting settings, thick walls for you to blast your own playlist and with drinks from Hive, organizing the party at this function room will be a piece of cake. Apart from the different seating areas in Hive, there is also a Cigar Room called “The Bowmore Room” where you can chew on your cigar of choice and sip on your comfort alcohol. Away from the buzz of the restaurant and enclosed within an elegant setting, The Bowmore Room will, to some extent, attend to your every 1940s fantasy. Situated close by The Bowmore Room is Hive’s Wine Cellar. Wine-tastings and food-pairing sessions are held in this area where numerous dazzling bottles of wine and even champagne are exhibited boldly. 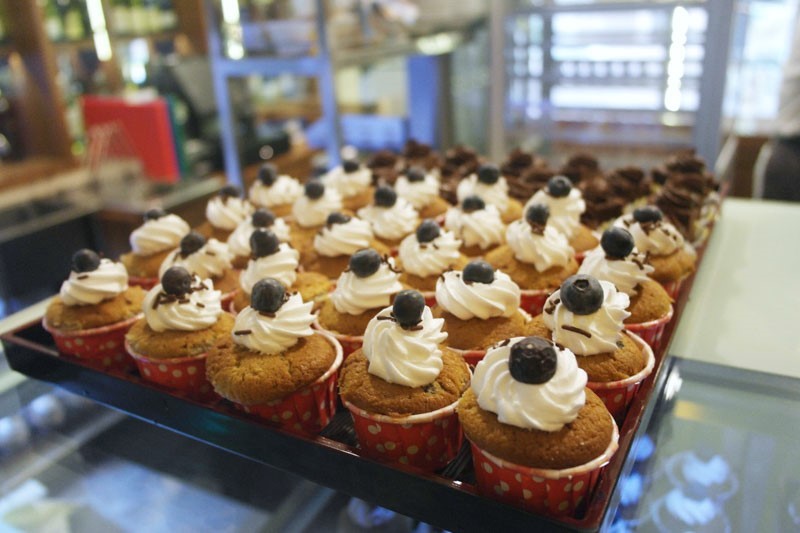 If you think Hive can’t possibly have anything else to offer, you are horribly mistaken. In order to make Hive by Wala Wala slightly more kid-friendly, a dessert shop has been set up within the restaurant where people can come by to purchase delightful cupcakes and other such pastries.

The dessert shop is also recognizable by the numerous brightly-coloured Hive merchandise displayed near it, where people who want to contribute to the Make-a-wish fund by buying a product can do so. 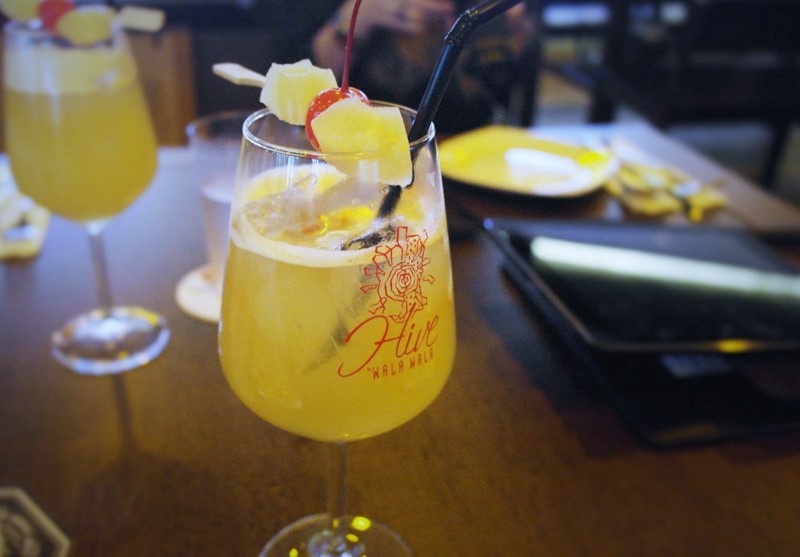 When we first arrived at Hive, chilled, sunny glasses of cocktails were brought to our table. The tropical drink which was heavily-infused with pineapple flavours seemed to stand for many of the things Hive represents. The sweet, brightly-coloured cocktail spoke of the robustness of the restaurant and the cheeky nature of the overall atmosphere. 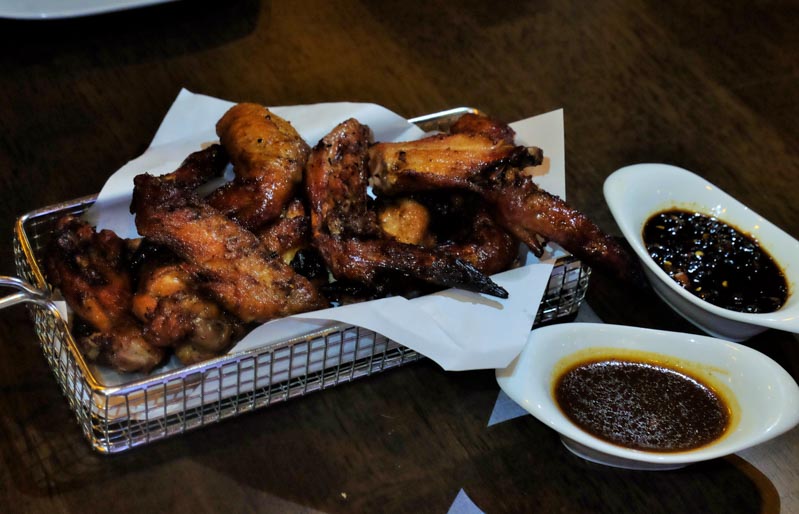 The first dish we tried at Hive was the Hive Charcoal-Barbequed Chicken Wings with Courvoisier XO Sauce ($15) which came with a savoury side of sauces. The chicken wings were tender, tasty and had a distinct taste of cognac in them. The entire basket of chicken wings made for a very appetizing dish that was perfect for sharing. If you prefer the snacks you pair with your drinks to be one the healthier end of things, Hive has got you covered with their Surfer’s Salad ($12). This colourful arrangement of fresh lettuce, olives, capsicum, crab stick, prawns and mussels was surprisingly tasty.

The salty bitterness of the olives complimented the blander flavours of the crisp lettuce leaves and the relatively bitter capsicum slices were balanced nicely with the sweeter components like the crab stick and carrot shavings. 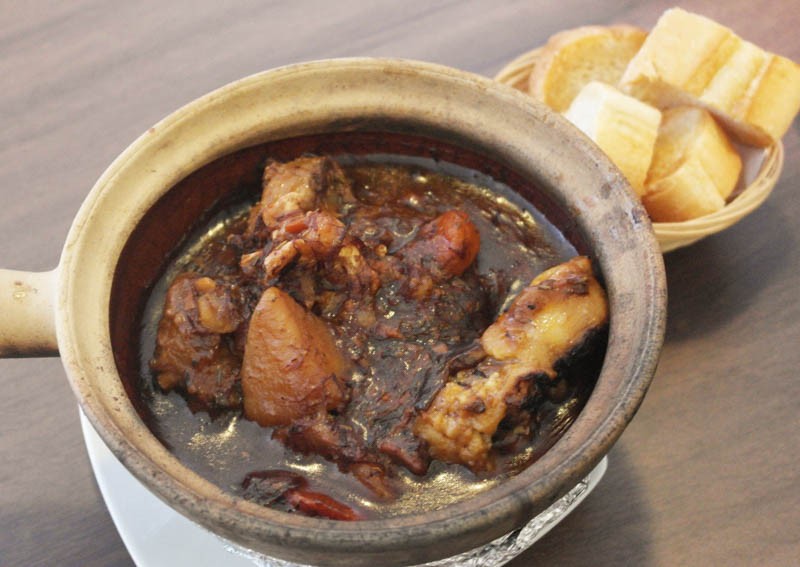 Next, we had Oxtail Stew served with Baguette ($12) which consisted of a dark, savoury broth packed with soft potatoes and carrots and beautifully-cooked meats. The oxtail meat tore easily and was incredibly tasty with the heavy, malty flavours of the stew.

The stew also had a hint of a herbal flavour which was quite splendid. This dish comes with a basket of baguettes so if carbs are mandatory for you every meal, you have nothing to fear. The Macaroni & Cheese with Bacon ($8) was delicious. It was creamy, with a relatively heavy milky taste which was nicely balanced out by the salty prosciutto bits. The gooey melted cheese also went beautifully with the macaroni pasta which was soft but not mushy.

If you are planning to let most of your inhibitions go and drink more than you usually do, I highly recommend getting the Mac n Cheese to soak up the alcohol in your system and do some damage-control. The final dish of the night came with an impressive showcase of flambeed meat. The Full Slab of Chargrilled Honey-glazed Pork Ribs Flambeed with Maker’s Mark Bourbon served with Baguette($36) worked wonders with the Bourbon and the pork ribs came through nice and saucy and laden with a strong alcohol flavour.

Much like the Oxtail Stew, this dish came with a basket of baguettes which I thought was just lovely as I continually indulged in sauce-dipped baguettes topped with tender, flavorsome pork ribs.

To conclude, my experience at Hive by Wala Wala was rather thrilling, mostly because I’d never seen a bar this big and the busy atmosphere at the restaurant-bar kept us all in a funky mood.

Food served is nothing  mind-blowing, but the drinking atmosphere is A+. You can pamper yourself with cigars, wines, cakes, meats, live music and everything in between at Hive so the excitement at this buzz-y restaurant-bar never runs out!