With Shake Shack gracing our shores and Five Guys just making their inaugural Singaporean debut, we are truly spoilt for choice when it comes to burgers.

Well, now we can add Lombardo’s, Amsterdam’s favourite burger restaurant, to that list as well. 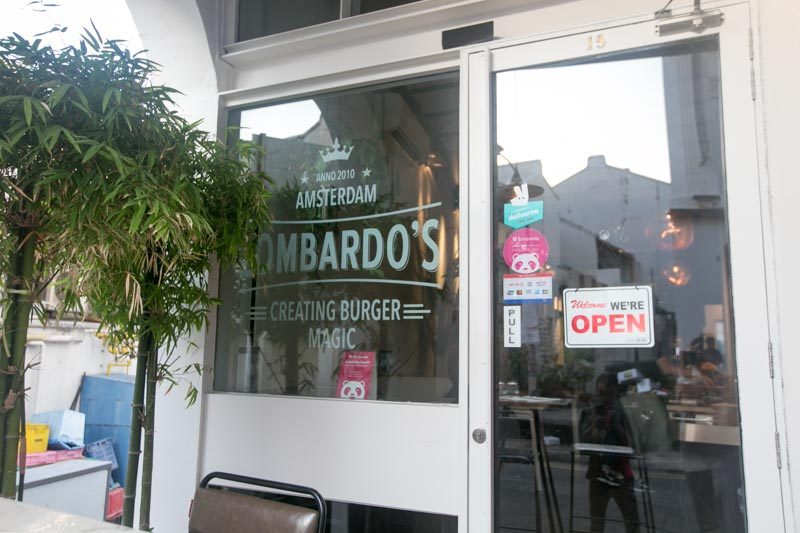 Tucked away in a little corner of Duxton Road, Lombardo’s shopfront is simple and unassuming; walk a little fast and you might just pass it by. 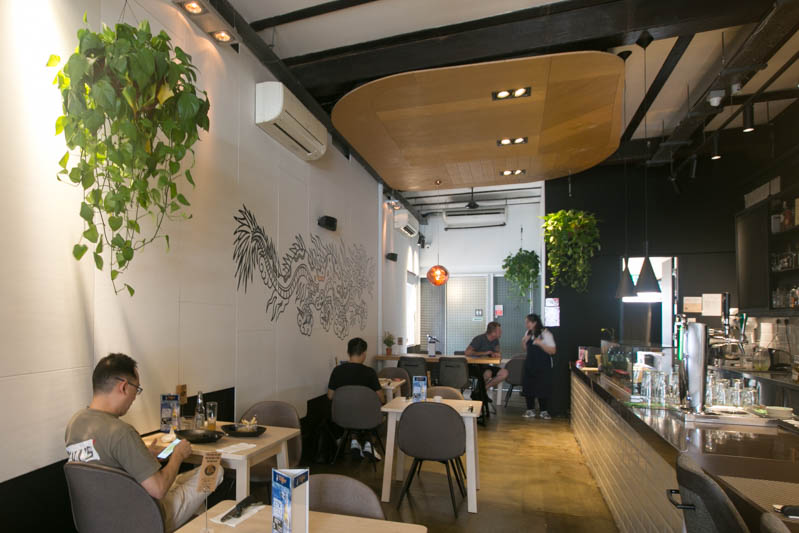 The interior of Lombardo’s is simply furnished, save for the hand-drawn dragon mural by Chef-owner Martijn Verdonk. Since this is the first franchise out of Singapore, Chef Martijn personally prepared the burgers at Lombardo’s during opening week.

As I got talking to him, I found out that that Chef Martijn has led a rather colourful life. 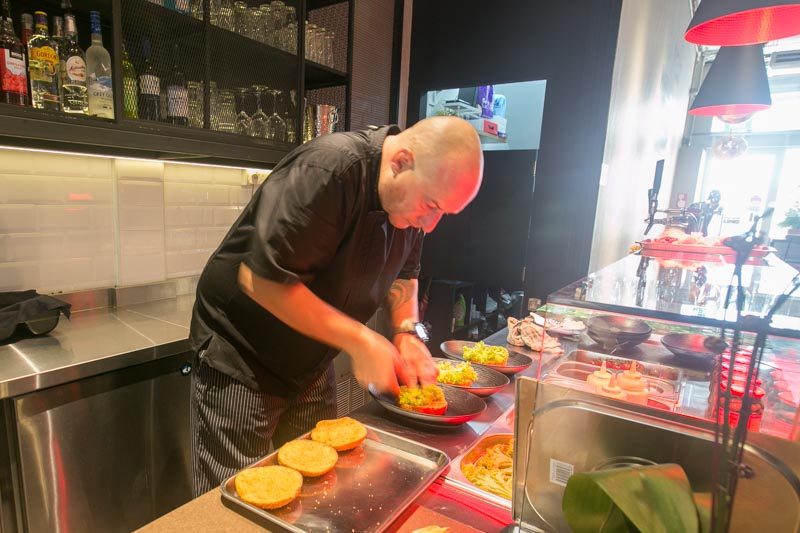 Chef Martijn had probably one of the coolest first jobs, as he started out as a DJ spinning in the clubs of Amsterdam. Then, after a 14-year stint, Chef Martijn hung up his turntables and became a private chef.

As a private chef, Chef Martijn catered an exclusive crowd of celebrities and socialites. These dinners were without a doubt fabulous, but Chef Martijn wanted to share his food with everyone and not just a select few. With that, Lombardo’s was born with a lean menu of only two burgers in the heart of Amsterdam’s Art’s District.

Lombardo’s quickly rose to become one of Amsterdam’s best burger restaurants in a short span of four years. Now having arrived in Singapore, I wanted to see if these burgers were worth the hype. Plus, if you’ve been keeping up with the news, Lombardo’s entered Singapore with quite a splash, with their S$250 burger as the draw for their opening special.

Luxurious doesn’t even seem to cut it when describing this burger, with sparkly 24-karat covered golden buns, a premium 200g Japanese Wagyu beef patty, silky butter-poached lobster tail and pan-seared foie gras, this burger is what dreams are made of.

Not to mention, all the proceeds from the sale of these burgers were donated to The Children’s Charities Association of Singapore. For Chef Martijn, giving back to the charities was precisely the way he wanted to begin his foray into Singapore. 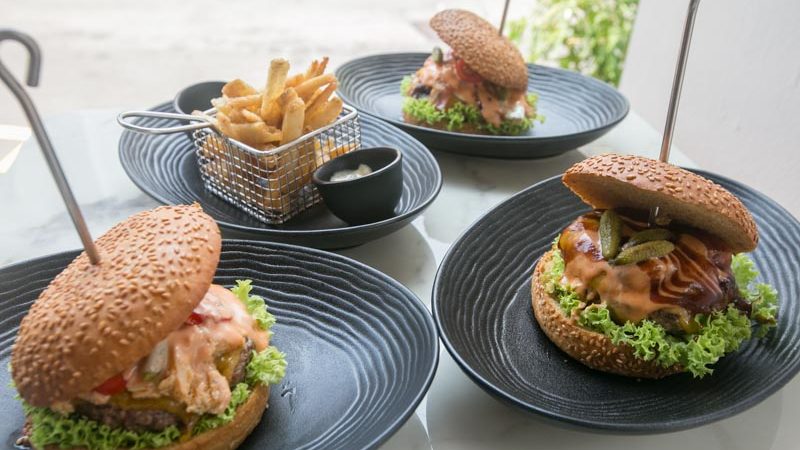 Having tried my fair share of burgers, I was pretty excited to sink my teeth in one of the highest-rated burgers in Amsterdam. 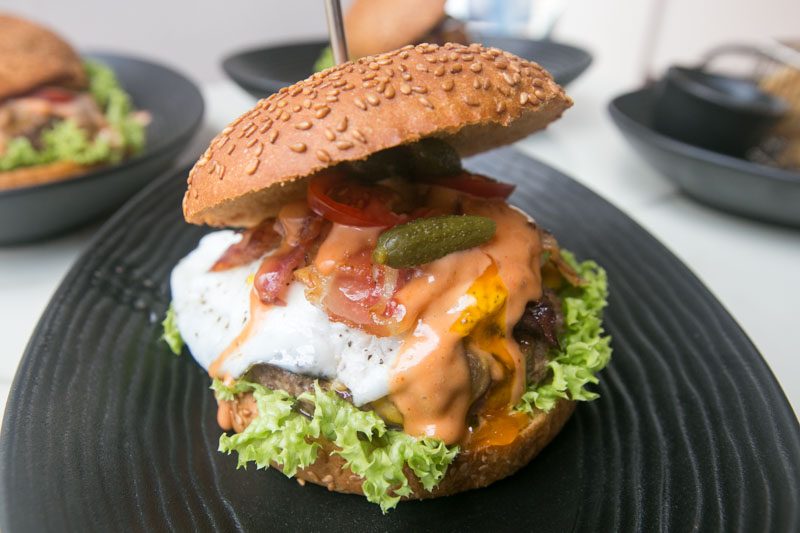 The Hangover Burger (S$27.50) is definitely for mornings when you’ve had a teensy bit too much fun the night before. Cradled between perfectly toasted buns lies therein a hearty Black Angus beef patty, a runny sunny-side-up egg, and topped off with perfectly grilled pancetta silvers—a definite pick-me-up for sure.

Truly, there is nothing better than a big, messy burger you can get your hands dirty with.

When it comes to any burger, the first thing you’d want to evaluate is the bun. A sometimes overlooked component of a burger, but for me, one of the most important aspects of what makes a good burger. No one likes a soggy bun slipping from your fingers at the end of your burger. For Lombardo’s, their sesame bun has a slightly crispy exterior and a fluffy centre—a promising sign. The beef patty was prepared to a perfect medium-rare, caramelised on the outside with a tender ruby red centre. When paired with the gooey yolk and sweet onion compote, each bite was a little sweet, savoury and downright satisfying. You might forget all the silly things you did the night before when you have this burger.

Another little detail I particularly appreciated had to be the mini pickles. Crunchy and briny, they added just enough texture in between bites to keep you coming back for more. As a love letter to Singapore, Chef Martijn created Singapore Fling (S$35). A unique combination of creamy, shredded crab meat on top of a luscious Wagyu patty, slathered with a dash of Lombardo’s secret sauce. Once again, the Wagyu patty did not disappoint. A lovely medium-rare, that was juicy and had a great mouthfeel. The crab meat was fresh and firm, chock-full of crustacean-y goodness. While both these components were indeed well-executed, I don’t know if I really liked them together.

While my dining companion enjoyed the burger immensely, for me, the texture of the soft, delicate flavour of the crab just didn’t pair well with the rich and fatty Wagyu patty. The last burger on our list was Pork-A-Licious (S$29.50), a godsend for meat lovers for sure. This beauty was stacked with a generous portion of pulled-pork laid atop that signature Black Angus beef patty, and a square of cheddar cheese before being drizzled with barbecue sauce and Lombardo’s burger sauce.

A double serving of meat in a burger is never a bad idea. It’s even better when the pork has been braised for 14 hours in beer. What you get is a sticky, sweet, mess of pork in the best way possible. The pork was a tad sweeter than I would have liked, but together with that winning Black Angus patty and melty cheddar cheese, this surely made for a gratifying and hearty mouthful. A serving of Lemon Zest Fries (S$8) would ensure a complete burger experience at Lombardo’s. These taters were chunky and thickly cut—just the way I like it. 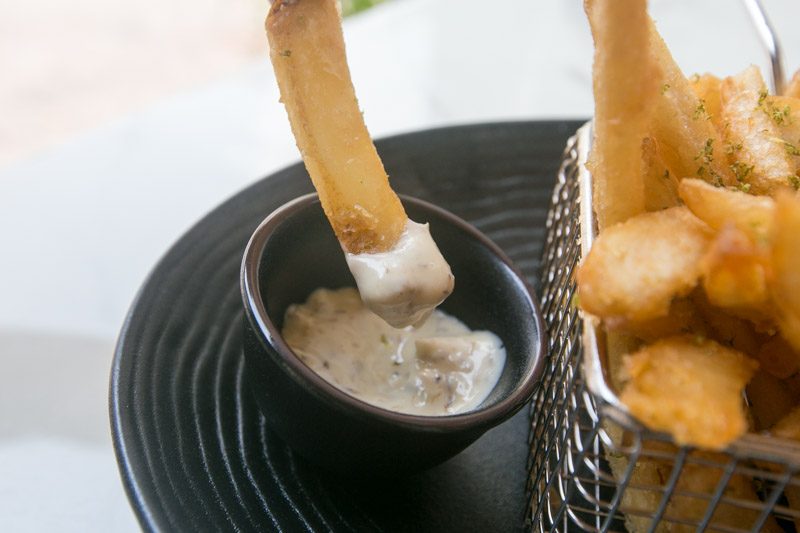 I would recommend having it with the truffle mayo for obvious reasons; creamy and a little decadent—it’s truly a great way to round out your meal.

I was pretty impressed with Lombardo’s burgers, to say the least, they were indeed well worth the hype. I was also pleased with how Lombardo’s handled the American classic and couldn’t get enough.

With an emphasis on simple, fresh ingredients, you won’t be disappointed with a visit to Lombardo’s.

Previous articleBeauty In A Pot Celebrates New Outlet At Westgate With Up To 50% Discount For Ladies From 29 Oct to 8 Nov
Next articleVistro: Truffle Flatbread With Cashew Cheese & Other Vegan Dishes At This Plant-Based Cafe In Bangkok