With Saint Patrick’s Day around the corner, we went on a hunt for the perfect place to spend the weekend at. A place which serves delicious pub grub, amazing Guinness and has the charm of typical Irish pubs. 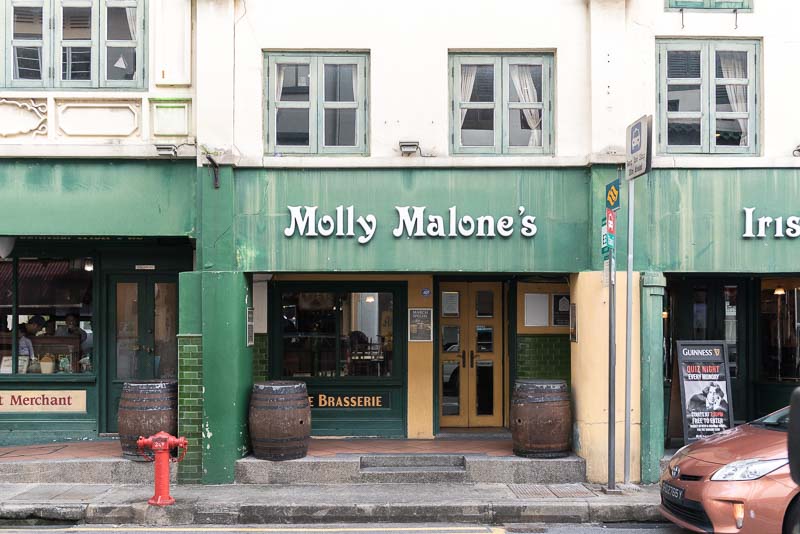 Named after the heroine in Dublin’s unofficial anthem, the pub has been running for 20 years at Circular Road. You can identify it from afar by the iconic green hues in its facade and its signboard. 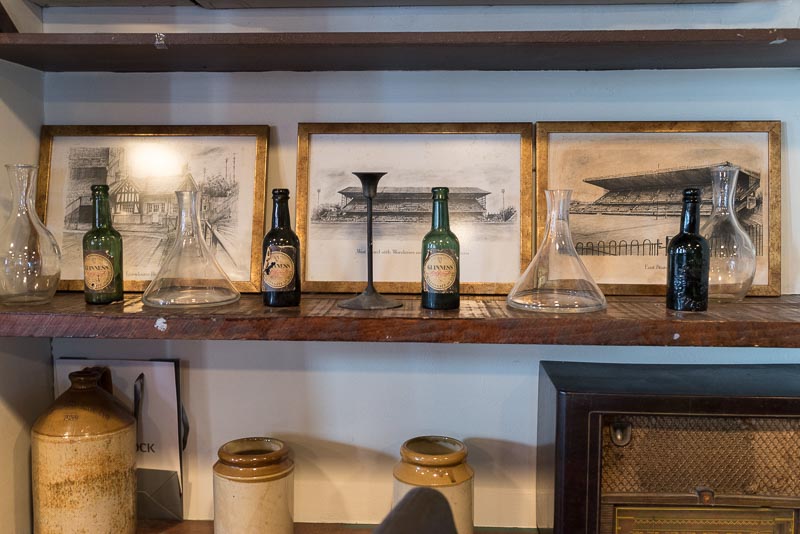 Upon entering the pub, we were greeted with a rather homely and cosy atmosphere. From the publican manning the bar to the old Guinness bottles lining the shelves and Celtic song books along the walls, it felt truly Irish. 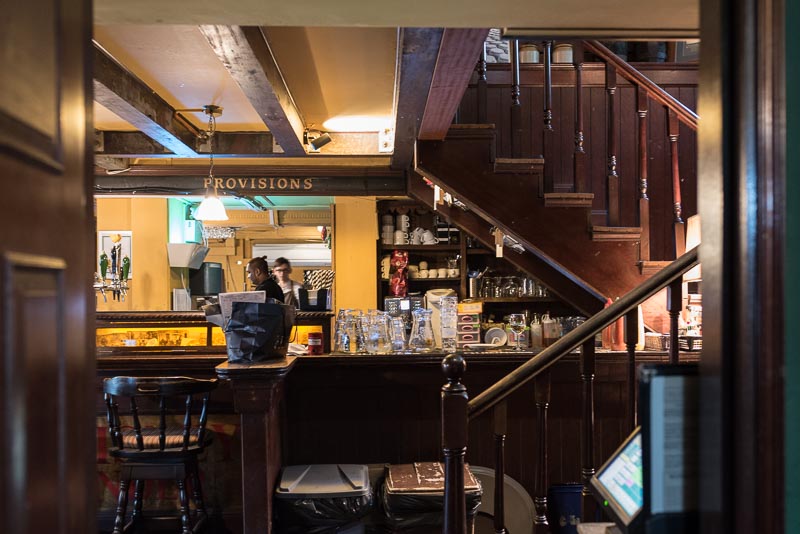 From our experience, the best time to arrive is after 8pm on days when the live band‘s playing. That’s when the atmosphere’s the best — with catchy tunes ringing across the room and rambunctious laughter and conversation all around. As I tapped my feet to the beat and sipped my drink, it felt as though I was back in Ireland. 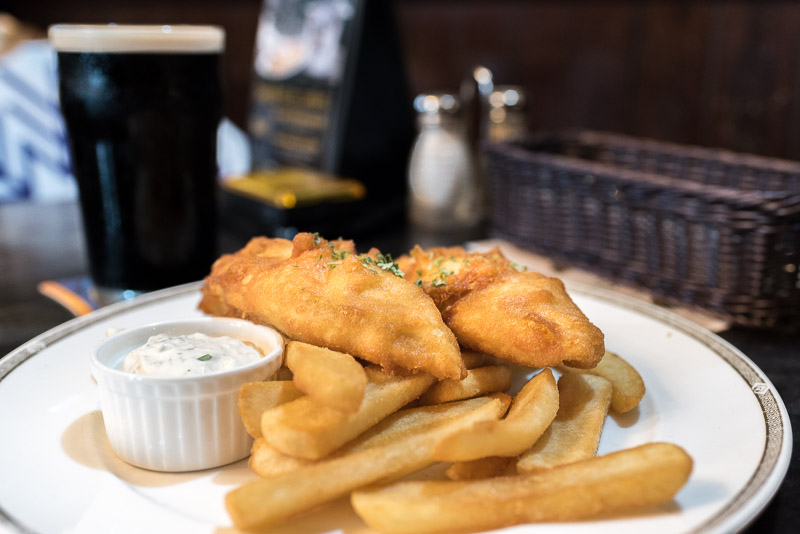 Since the pub’s speciality was its Molly’s Famous Fish “N” Chips ($16), and its namesake, Molly Malone, was a female fisherman, I had pretty high expectations of the dish.

It ended up exceeding my expectations. It was perfect. 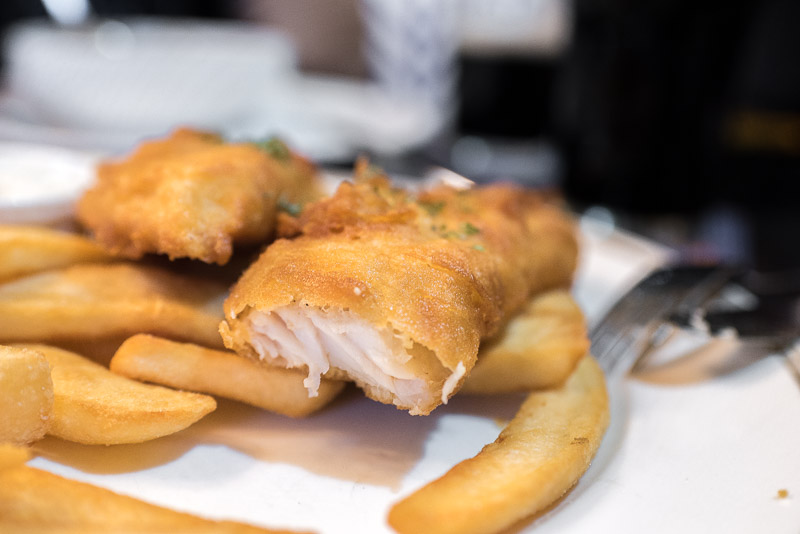 The batter was crispy while the dory fish inside was moist and silky. The fish was really fresh and I appreciated how it didn’t flake into pieces while I was slicing it. It was seasoned just right and the slight saltiness from the fish juxtaposed well against the tartness of the tartare sauce.

I’ve been craving for good fish and chips since returning from Europe and this has filled the void. I really recommend everyone to try this! I’ll definitely be back again for this. 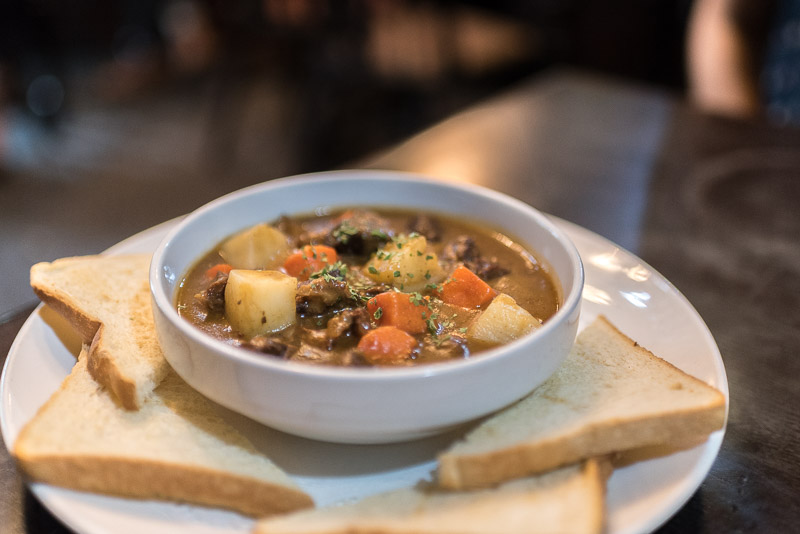 We were also recommended the Irish Stew ($18), another traditional dish on the menu.

As the stew is slow-cooked for over 16 hours, it tasted gamey and rich, with the flavour of the lamb meat coming across strongly and distinctly. The stew contains generous portions of braised lamb cubes, potatoes and carrots. It pairs nicely with the toast that was served alongside it.

My friend, who’s partial to lamb meat, loved the stew and enjoyed how tender and flavourful the meat was. She couldn’t stop scooping spoonful after spoonful and polished off the dish in no time. 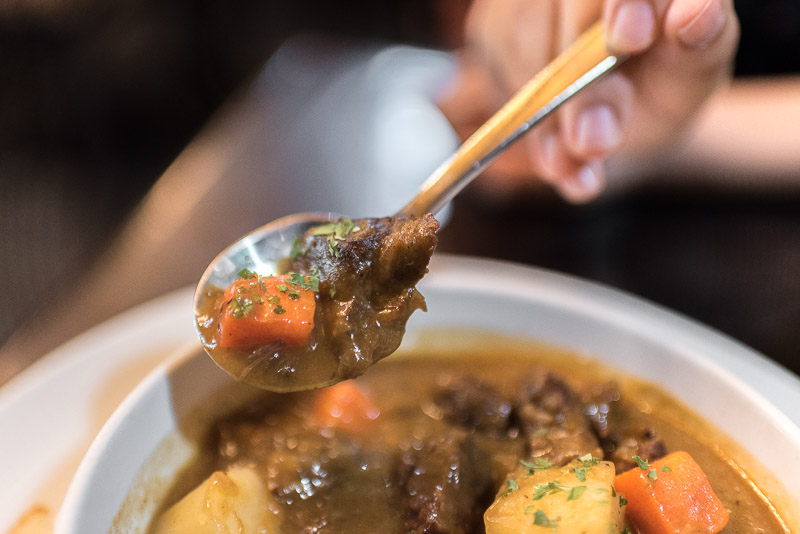 However, I wouldn’t recommend this dish for those who aren’t the biggest fans of lamb meat. The taste may be too strong for you. 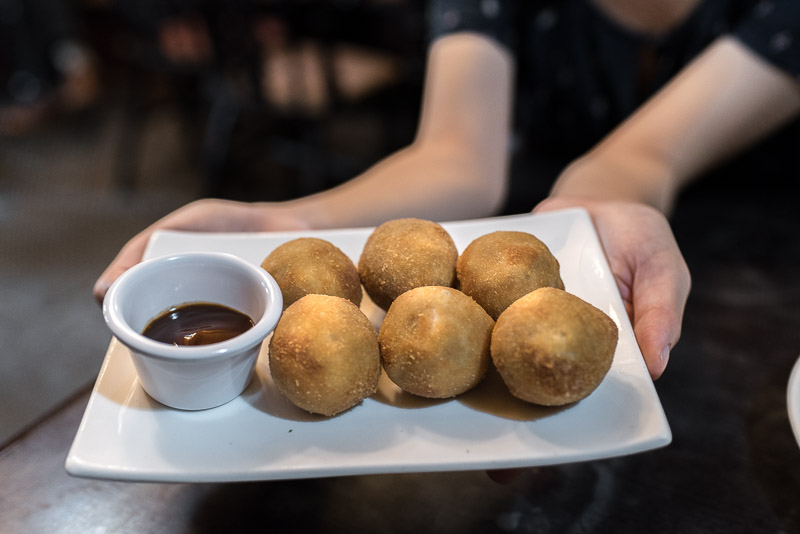 I found it a little too dry on its own. But, dipping it in the HP sauce solved the problem and gave it more flavour. 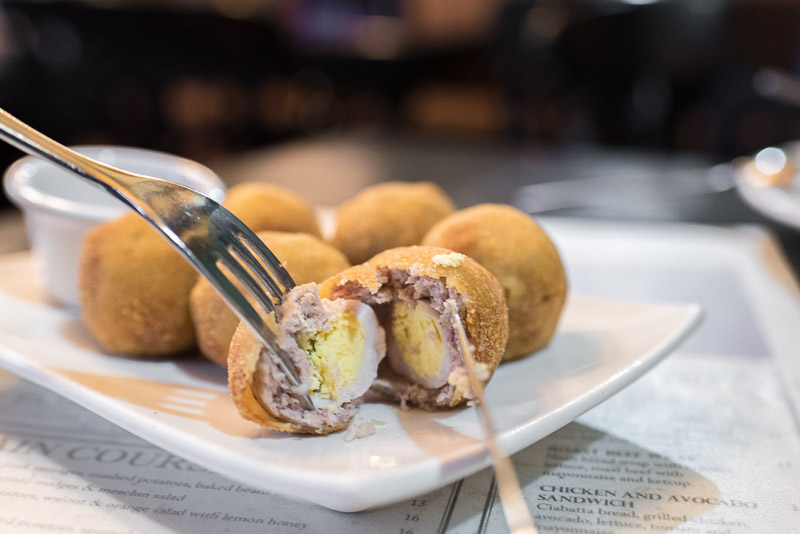 However, this dish was lacklustre compared to the previous two dishes. We noticed that other diners seemed to favour the Mini Fish & Chips and the Hot & Spicy Wings, both of which smelled delicious. If you’re looking for some bar snacks, perhaps opt for those instead.

Since Ireland is synonymous with Guinness, it’s a no-brainer to have a pint of stout at an Irish establishment.

Even before tasting it, I was already charmed by how beautiful it looked, with the layer of foam sitting perfectly atop the dark liquid.

As someone who doesn’t drink often, I found it surprisingly easy to sip on the Guinness ($13.50) at first. Just like how a good pour is supposed to be, the stout had a full-bodied taste and I could barely taste any bitter hints initially. Rather, it was velvety and creamy.

However, through the night, the taste evolved to reveal darker hints of flavour. It tasted more roasted and wheaty and the bitterness was more noticeable. After some research, I think our mistake was taking way too long to finish our drink.

Apart from the good ol’ Guinness, there are plenty of other options for drinks. We wanted something more traditional and hence opted for the Irish Old Fashioned ($12) and Molly’s Irish Coffee ($12). 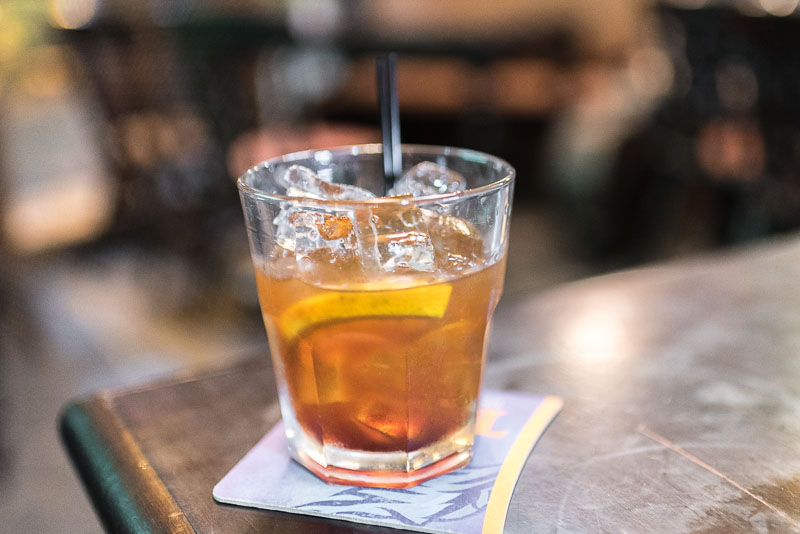 Initially, I only tasted hints of citrus in the Irish Old Fashioned and thought there was no kick. A few sips later, the whiskey and home-made Guinness syrup shot right through my system. Definitely not recommended for lightweights! 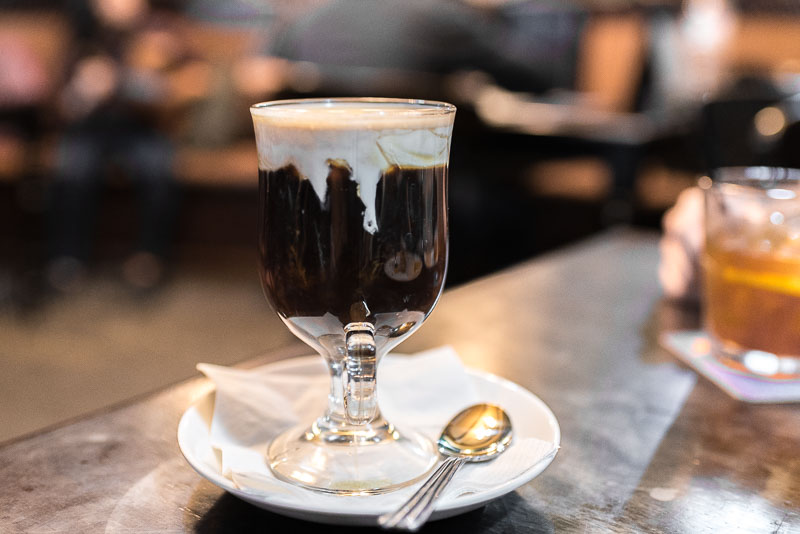 The Irish are notoriously great drinkers and from stories I’ve heard, it’s common practice for them to spike their tea and coffee with a dash of whiskey. Hence, I was looking forward to trying Molly’s Irish Coffee. Besides, drinking a glass of intentionally-warm alcohol was a pretty novel experience.

The drink turned out to be essentially comfort and contentment in a glass; it was delicious and I savoured every sip.

The freshly brewed Italian coffee mellowed the taste of the alcohol and the fresh cream was rich and tasty. You could taste the whiskey in the drink but it wasn’t overpowering. Also, the shot of Guinness syrup tasted velvety and somehow chocolatey. 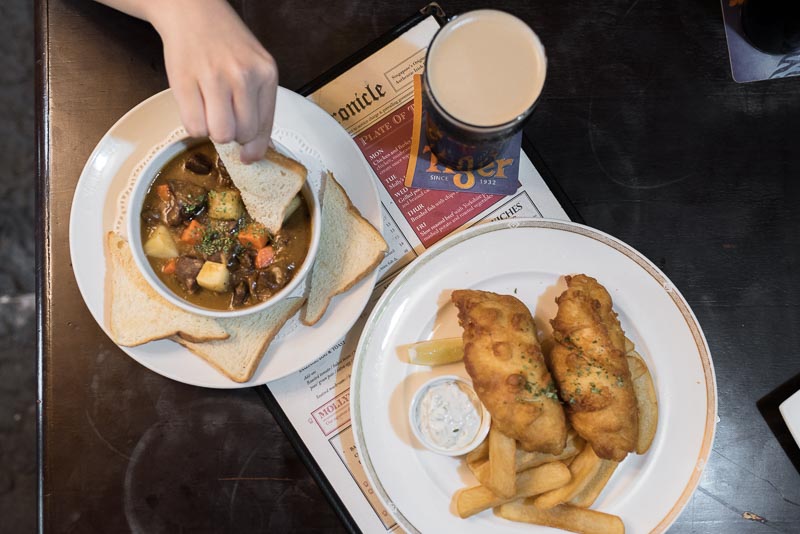 Do note that for St. Patrick’s weekend, the a la carte menu will only be available until 5pm on 16 March, and until 2pm on 17 March and 18 March.

Also, St. Patrick’s Street Fest will be returning again this year, and on 17 March and 18 March, Circular Road will be transformed into a street party showcasing the best of Irish culture. This means that Molly Malone’s Irish Pub will be a prime spot to soak in the festivities.

After the Street Fest, head indoors for some grub and to enjoy gigs by well-known Irish bands. As they would say in Celtic, Sláinte!