I love stumbling across great food, especially when I least expect it. Momo Kitchen happens to be one of them. With the hype over butterfly pea nasi lemak, I expected this to taste just like the many I’ve had but I couldn’t have been more wrong.

Located in the middle of HDB estates at Bukit Merah, this homely restaurant may not be the most convenient but definitely worth the travel. 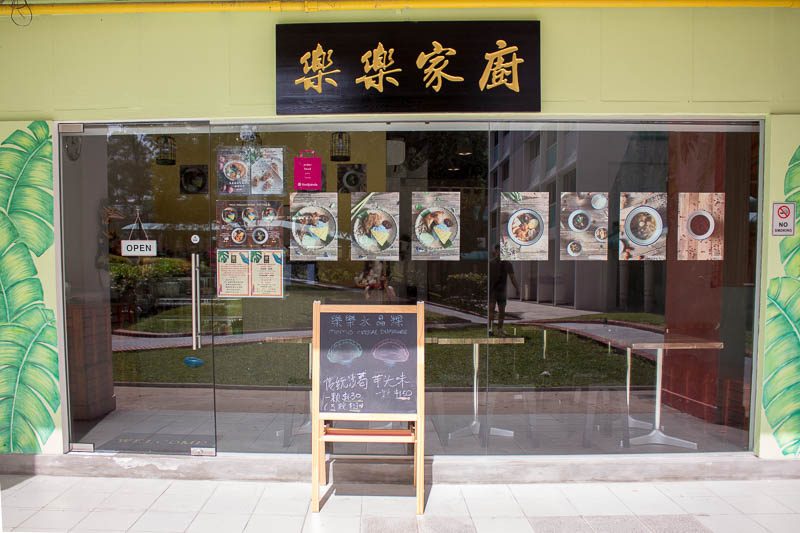 Momo Kitchen’s owner, Pauline, used to be a graphic designer. She discovered her passion for food when her mother fell ill and she had to cook for her family. Hailing from Malaysia, she picked up recipes from her in-laws who are in the food industry there. 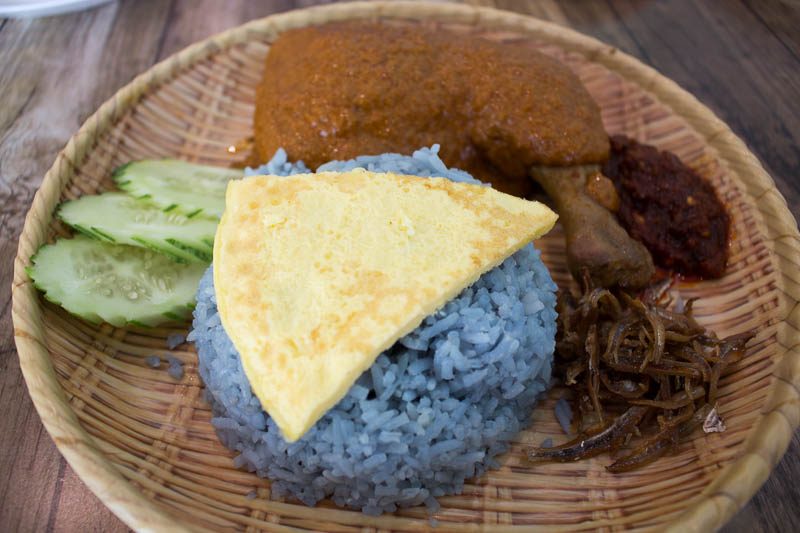 I decided to go for the Rendang Chicken (S$5.90), as I personally really like rendang for its complex flavours. As it was served to me, I was impressed by its sheer portion size, especially at its price. 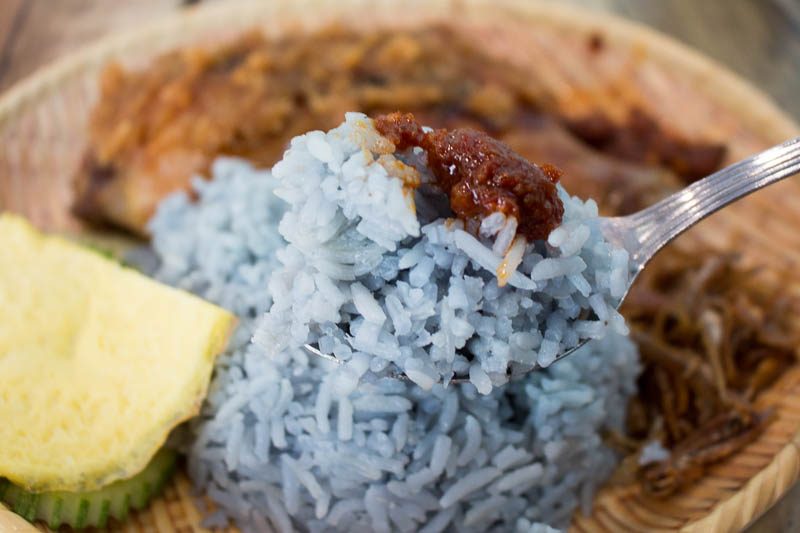 The butterfly pea rice was naturally dyed a baby blue colour, which was an aesthetic plus point. Cooked in coconut milk, it was distinctly fragrant. The rice itself was soft and fluffy, which I really liked. Rice is one of those simple staples, but when done right it really makes all the difference.

Paired with the aromatic sambal, it was so good I would have been satisfied having it on its own. The sambal leaned towards the sweeter side, but not too overwhelming. It still packed a slight punch, enough to feel the heat but not suffer from it. 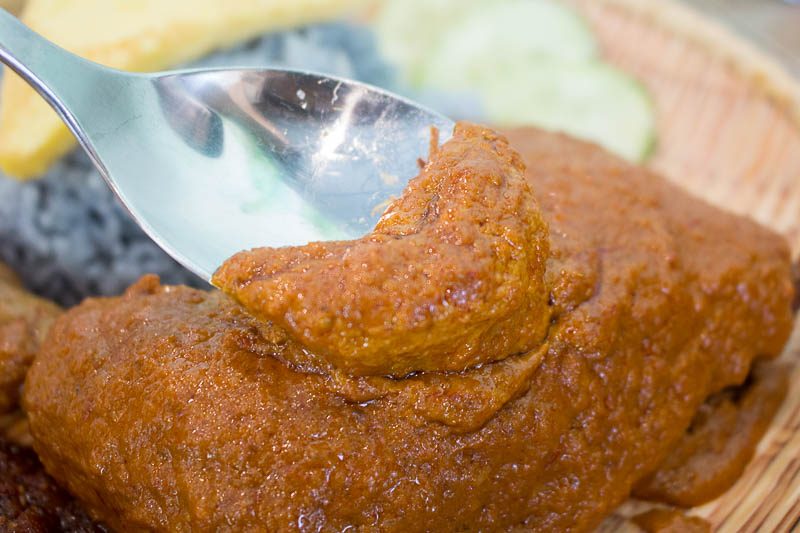 While the rice and the sambal was great, the rendang was a whole new level of delicious. Even as I write this now, I salivate at the thought of how immensely flavourful it was. Loads of spices were used to achieve that intensity in the rempah, they were bold yet complemented each other perfectly.

The coconut cream gave it a thicker and richer consistency, yet it wasn’t overpowering. The hint of spice helped to alleviate the milkiness and prevented any jelak-ness. 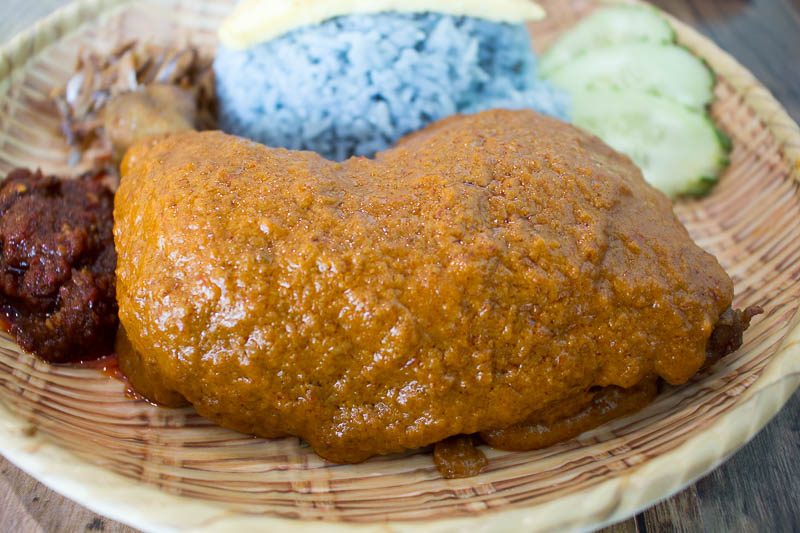 The huge chicken leg was also well-executed with its juicy and tender meat. This could be attributed to its preparation technique, first poached then simmered in the rendang sauce. 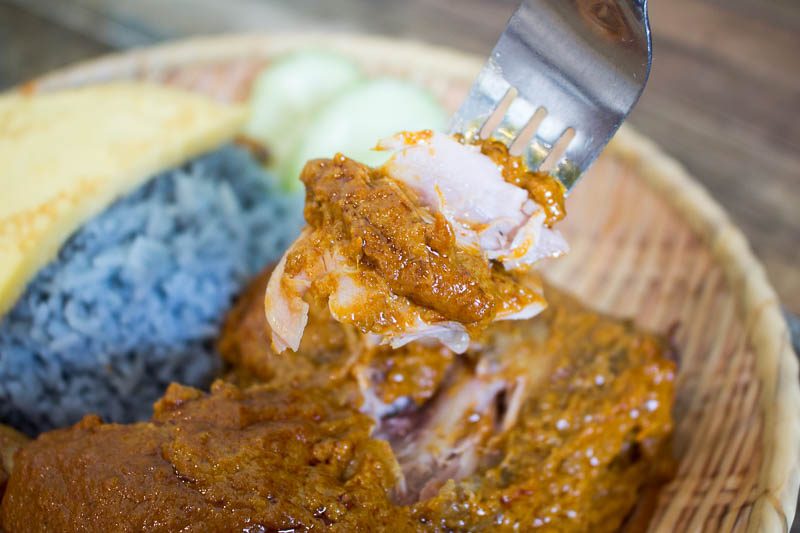 As chicken tastes mild on its own, what it’s cooked in and its seasonings play an important part. In this case, not only was the texture great but it nailed the full flavour profile as well. 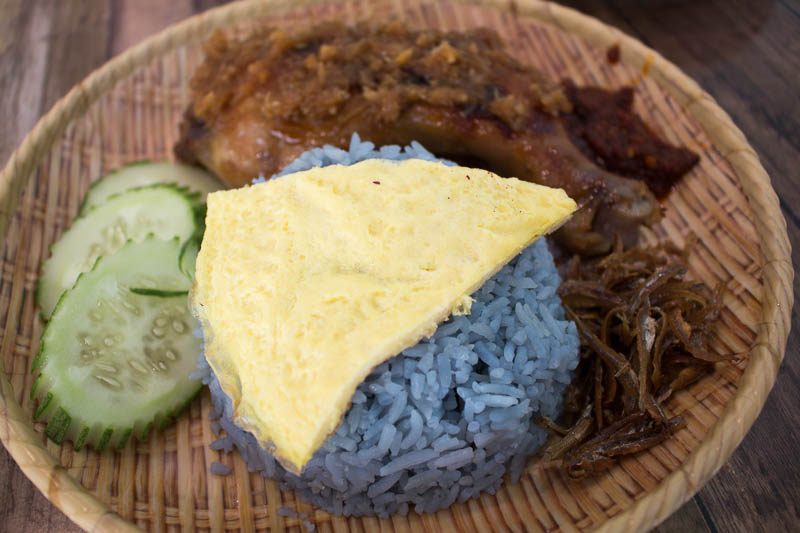 We also got the Lemongrass Chicken (S$5.90). Similarly, it also came with roasted ikan bilis and peanuts, fresh and crunchy cucumber slices and a slice of fluffy omelette. I appreciated that even the sides were done nicely. The cooking method for this chicken leg was slightly different. They sous vide it instead, which produced incredibly succulent meat. The lemongrass was deglazed then cooked into a sauce instead of being deep fried as how most places do it. The lemongrass was soft and easy to eat, with a distinctive fragrance. I liked how it had a subtle citrusy tang with some touch of herbal notes.

My only gripe was it was a tad too sweet for my liking, although it could be from the natural sweetness. 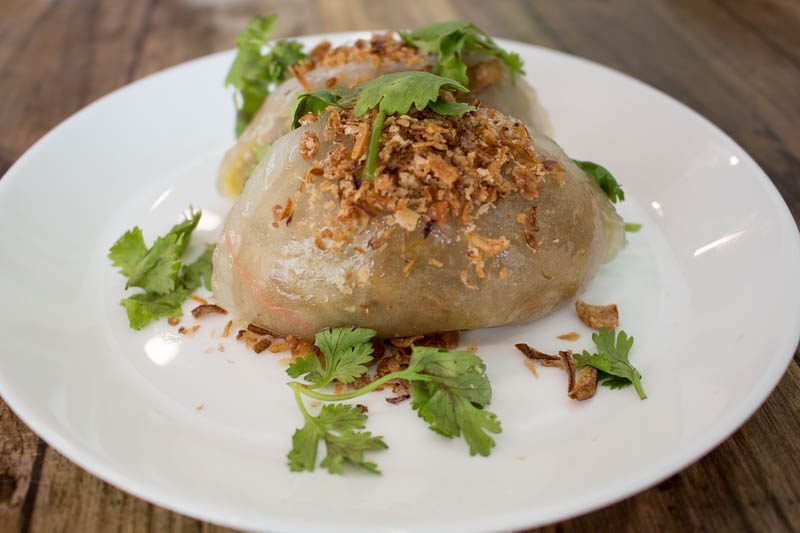 We also got the Signature Crystal Turnip Kueh (S$1.30), which looked glorious with its translucent skin. These handmade goodness were plump and I could also see the generous packed filling peeking through it. 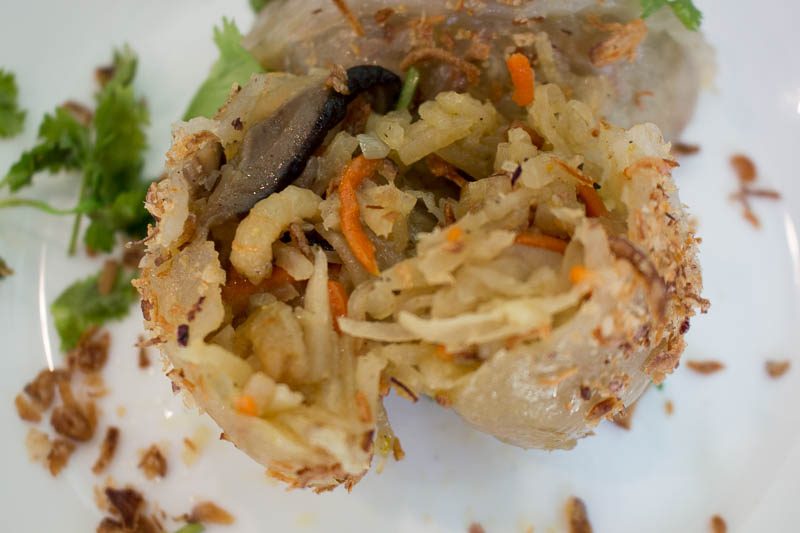 Cutting into it, the skin was resilient and there was an optimal ratio of skin to filling. While it looked like soon kueh, it tasted pretty different.

The crystal skin was soft yet chewy, I would best describe it as mochi-like. I loved how it had a nice bite to it, which was a textural contrast from the crunchy vegetables. Unlike soon kueh which has bamboo shoots in them, this kueh uses jicama. They also had a mix of carrots, mushrooms and dried shrimps in them. It was a savoury delight, packed full of flavour from the ingredients. It came with both sweet sauce and chilli sauce. While I did feel that the kueh was so good on its own that it did not need any additional condiments, I tried them out anyway. 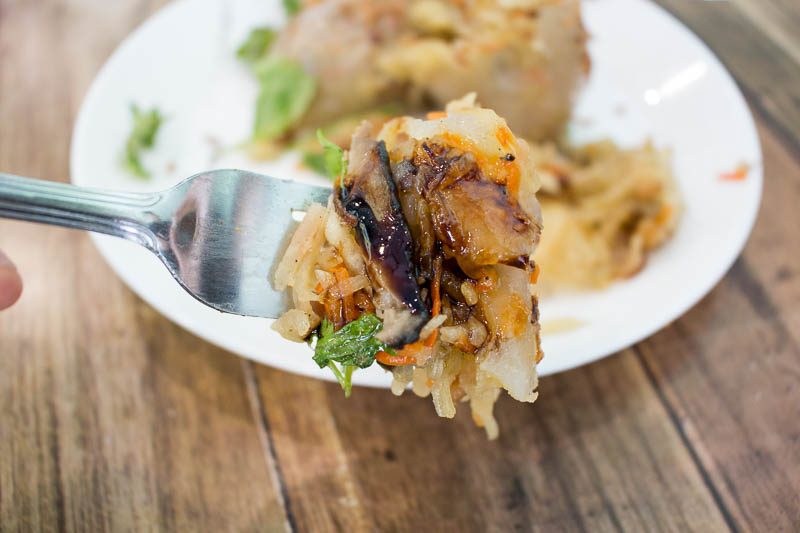 Personally, I liked the sweet sauce better as I felt it gave another dimension of taste to the kueh. However, the chilli sauce was pretty good too. It packed a little punch, for those who love a kick of heat. 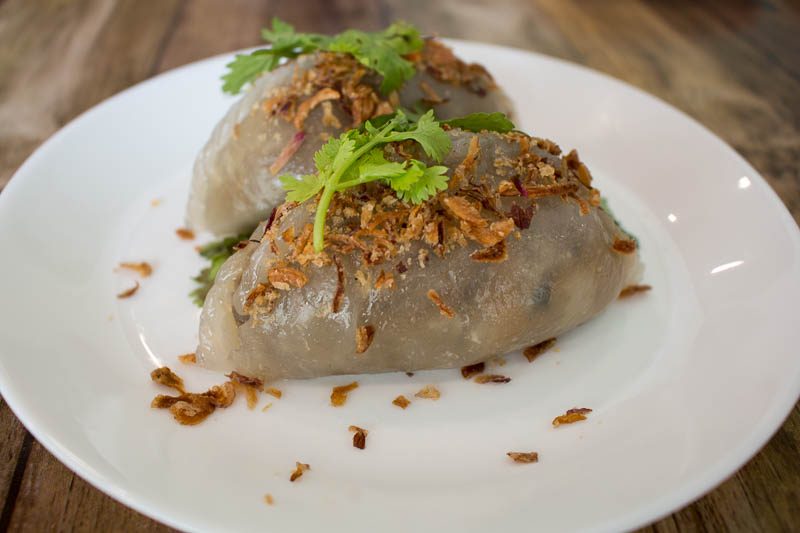 We also got the Handmade Yam Kueh (S$1.30). We harboured high expectations for this one as the former was that good. Indeed, we were not let down. 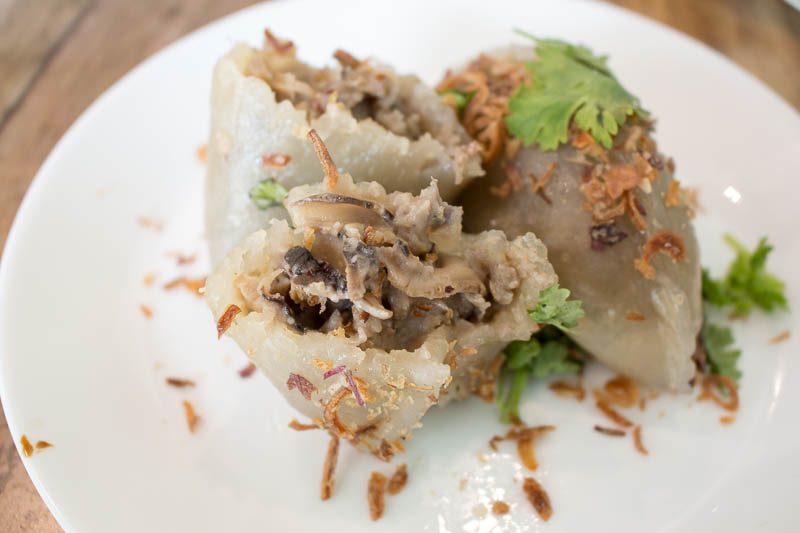 The yam itself was silky smooth, and this texture gave a richer mouthfeel. It was very fragrant, with the generous use of aromatics packed in the yam filling. The earthy and nutty notes of the yam were elevated, which made this a flavour packed dumpling.

If you prefer something heavier on the palate, or love yam, this is the one for you! 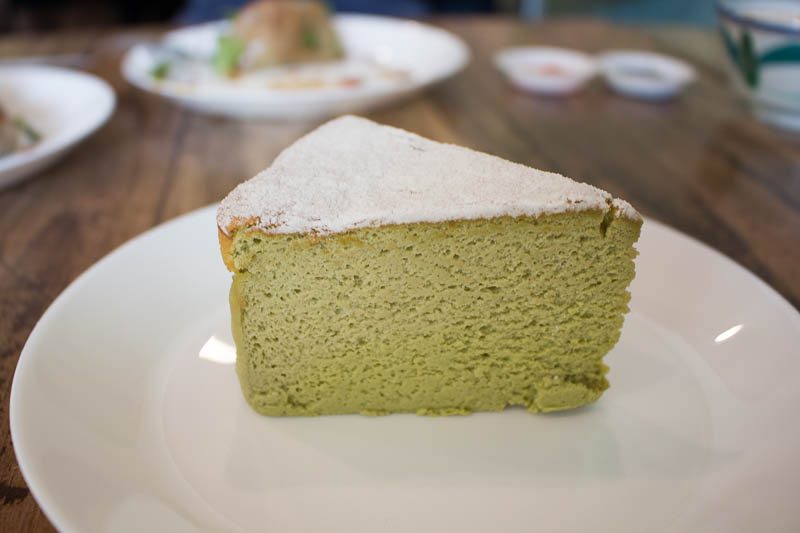 To end off our meal, we got an Uji Matcha Soufflé Cheesecake (S$6). This was made by Pauline’s cousin, Xavier, who is a trained pastry chef. He came up with the Chinese desserts that are always available at Momo Kitchen. He also does a variety of other desserts like this but there isn’t a fixed menu.

While it is always different, don’t miss out on it. Based on what I’ve tried, they are really good and comparable to speciality bake shops. 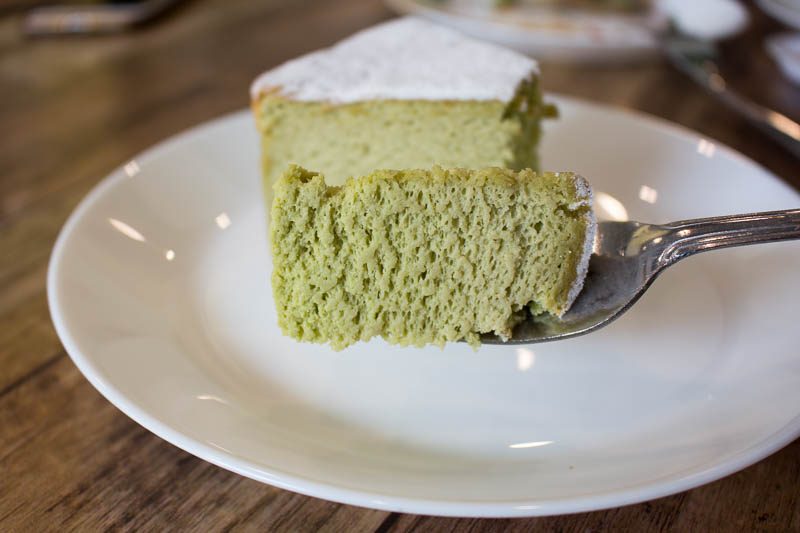 As I sliced into it, I was pleasantly surprised as to how soft and light it was with a slight jiggle.

I loved how fluffy it was, with a cotton-like mouthfeel as it melted away effortlessly. It was a perfect cross between a creamy cheesecake and an airy soufflé. Besides nailing the texture, the taste was spot on too.

The cheesiness was distinct, but not too overwhelming. It was very palatable, with a subtle eggy undertone. I could taste a hint of the matcha, which was rich and full-bodied. The rich bitterness with a light sweet aftertaste is evident in good matcha. Xavier let on to me that his friend got him some matcha powder from Japan, so he decided to make a creation around it. Well, it definitely worked.

I enjoyed my meal at Momo Kitchen immensely. It is one of those hidden gems that I will definitely frequent. Not only are their offerings affordable, but taste really good too. They also have other offerings such as Penang prawn mee, which I saw many people ordering.

That would be on my list next! If you are ever in the area, or even if you are not, do give Momo Kitchen a visit. I can attest to the quality that you will not regret it.