Quaintly nestled amongst a row of shophouses at the Chinatown district, Monochrome Fusion Bistro presents a newly inspired themed concept here in town. And as you can guess, yes, the shop is pretty much entirely designed in a monochrome tone.

Among the shades of black and white (not grey), one would be very much in awe of the amazing detail and intricacies the folks at monochrome fusion bistro have put into their decor. 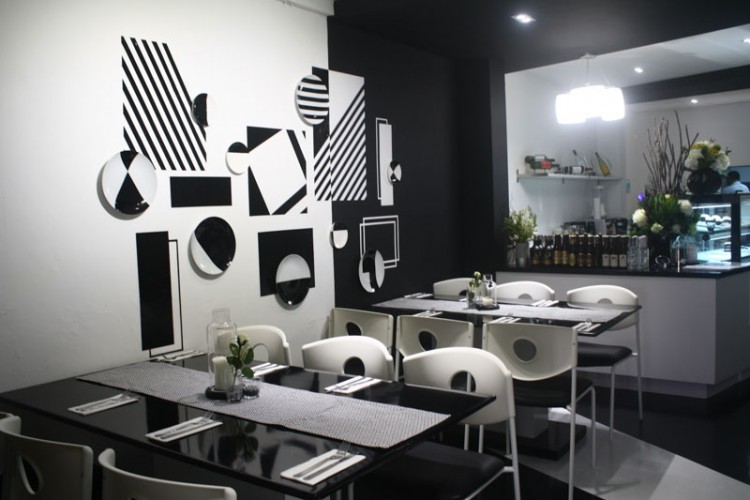 From hand-painted walls and plates to even their desserts, almost everything here is in black and white. It reminds me very much of settings in classic B&W movies, albeit with a modern twist.

Now, don’t expect their decor to be too harsh as per the clash of opposing colours, because there also seems to be a soft touch to it. With cream hues for flowers, as well as couches and sofas to lead your way to a relaxing environment to dine in.

But of course, the folks over at monochrome have thoughtfully incorporated their monochrome theme into their cuisine even, which made it all the more special. 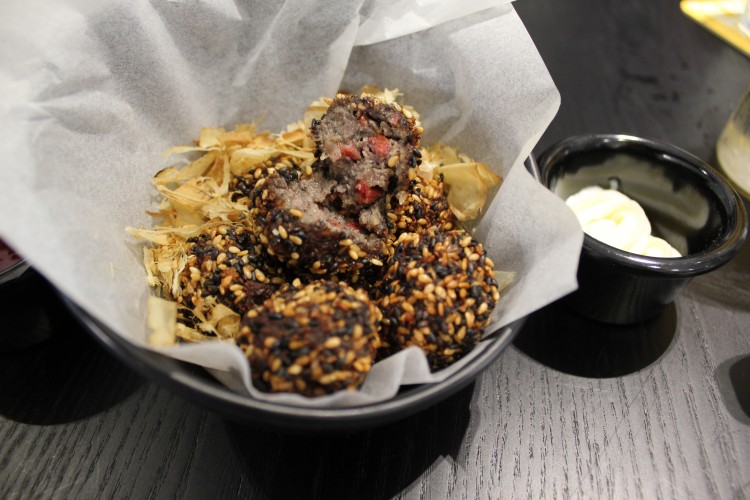 Monochrome B&W Chorizo Meatballs ($9.80). Monochrome theme alert! Even the sesame seeds that cover the balls are a mix of black and white. Perhaps due to the chorizos, but this side came across a little too salty for my liking.

Other than that, it was very much an interesting twist and one of their signature bites as well. Maybe you could try out their chicken version instead. 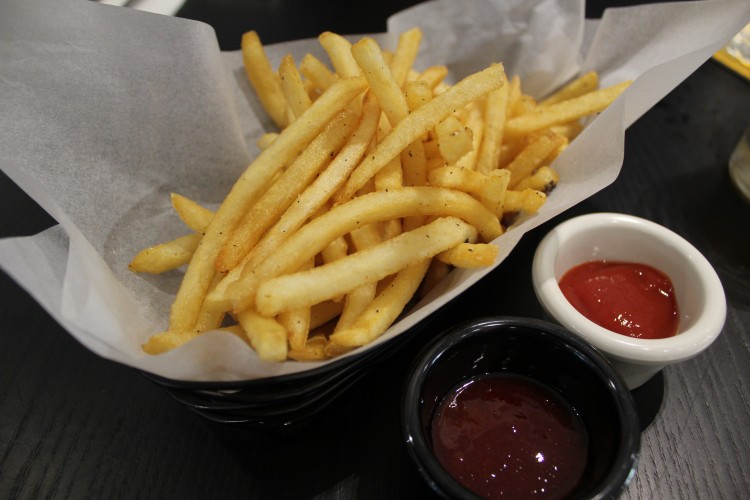 Smoked Truffle Fries ($11). Well, all I can say is that the truffle fries here were pretty ordinary, but they would satisfy your craving nonetheless. Served piping hot, the aroma of truffle fries seems to be one Singaporeans would never get sick of, and these were no exception. The fries were crispy, carrying a subtle but still- strong aroma of truffle oil.

By the way in case you didn’t know, truffle oil isn’t made from real truffles – its all artificial chemicals. The Thai Sauce Coated House Wings ( $9.80) was one of my favourites among the bistro’s menu. The wings were crisp on the outside, and yet tender and moist on the inside. Coated with a zesty sprig of flavourful Thai sauce, it made for a great combination as a starting dish. 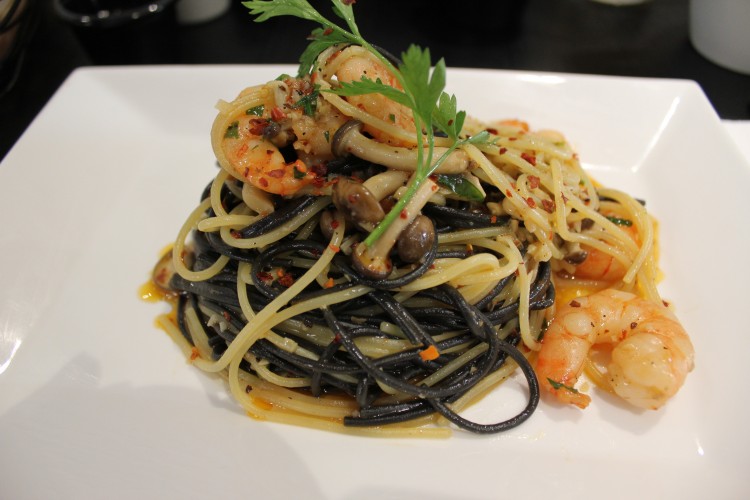 Here it is again, elements of their theme in food, au naturale via a mix of squid-ink spaghetti with normal ones for that contrast in colors. The Monochrome Aglio Olio ($18.80) was a pretty good choice as far as Aglio Olios go. The noodle was well-coated with a layer of fragrant olive oil. Fried with garlic, prawns and mushrooms, the flavour of the dish was enhanced.

Overall, it proved to be pretty pleasant per say, even though bordering on average. But hey, where else would you get such an interesting concept? 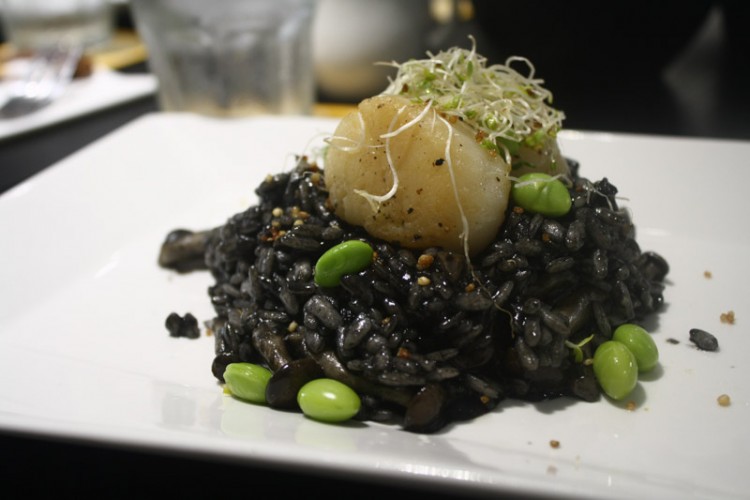 Squid-ink Risotto ($24). I liked this dish pretty much actually. The risotto wasn’t dry, and subtly carried the saltier taste of squid ink into the mix. Along with big pieces of juicy scallop, it was one of the better dishes here at Monochrome Bistro. I felt that they could have perhaps integrated more elements of beans/side salads to this dish for a lighter, refreshing taste.

However, I appreciated that Monochrome took the effort to pay close attention to the authenticity of the risotto dish, allowing for a slight bite to the grains, as per al dente Italian risottos go. 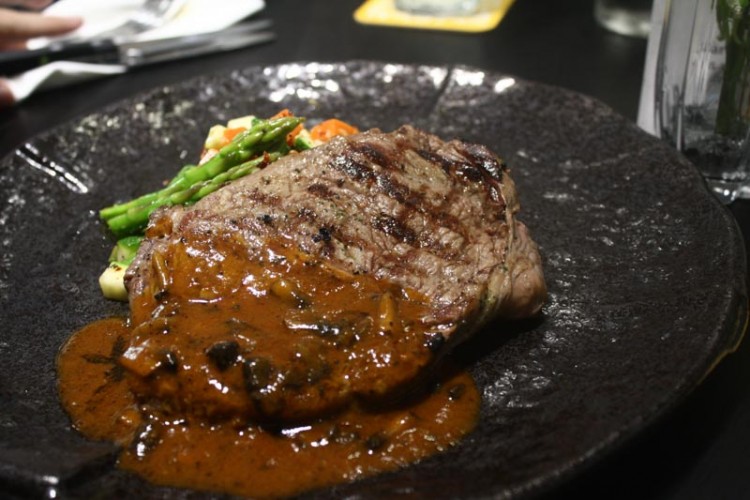 Rib-eye Steak ($28). Even though this dish was pretty disappointing, it was saved by the tenderness and fat distribution of the cut. The steak itself was pretty moist and slightly tender, albeit lacking in the seasoning department.

The initial bite left a flat flavour that just dissipates without any lingering beefiness. Well, you could try their pan-seared Barramundi instead. It looked quite good. 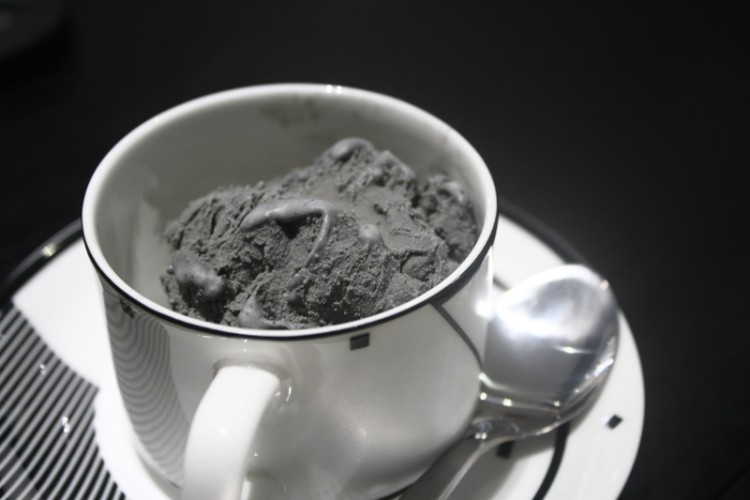 We were definitely thoroughly impressed by their Black Sesame Ice Cream ($4.80), it being one of the better ones I have tried. With a creamy consistency, it carried the robust and distinct taste of black sesame very well, but not crossing into overpowering. One of the more authentic black sesame ice creams in town, theirs were a notch above the rest, where you could really taste the original flavours. Certainly not one of those artificial wannabes. 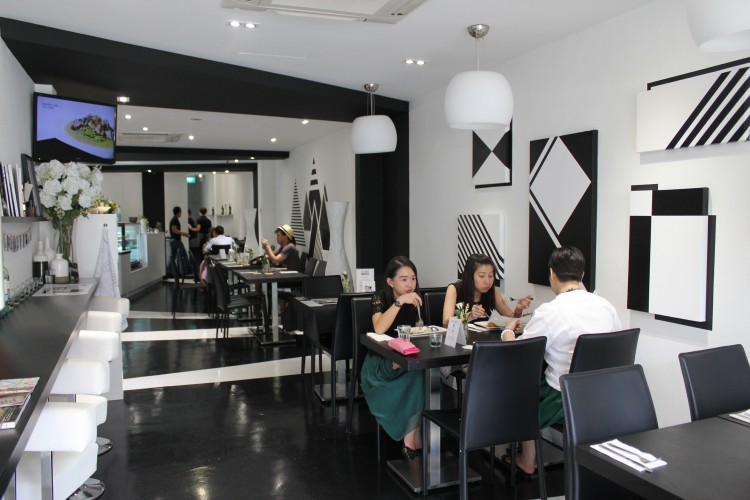 Overall, we found the food at Monochrome Fusion Bistro to be hinging on regular cuisine, with some hits and misses here and there. But still, thumbs up to the amazing decor and concept over at Monochrome and the evident effort of their theme in the food too.

If you’re around the area, why not drop by for a quick casual lunch or some great black sesame ice cream, for which Monochrome sure wouldn’t disappoint.