I was first introduced to Mother-In-Law Egg Tart when they were still a home-based business during COVID. My mother had brought home a box of egg tarts, knowing that I had a soft spot for them. I greedily gobbled it down and thought that they were really delicious.

They have two outlets, one of which recently opened in May 2022 at Jurong Point. I brought a companion and headed down to try their tarts to get an unbiased opinion. Located at Level 3 of Jurong Point opposite Golden Village, the yellow shop immediately stood out. I quickly approached the counter to order.

What I tried at Mother-In-Law Egg Tart

Mother-In-Law Egg Tart has a total of seven different flavours, and in order to try them all, we ordered a Box of 6 Pcs Assorted (S$18.90) along with the Original (S$2.20). The tarts are baked every half an hour due to high foot traffic, thus one can expect the tarts to be warm and flaky upon purchase. The Box of 6 Pcs Assorted (S$18.90) came with six different flavours, all of which were packaged nicely. When I opened the box, the aroma of freshly baked tart wafted through the air, and I was so excited to try all of them. 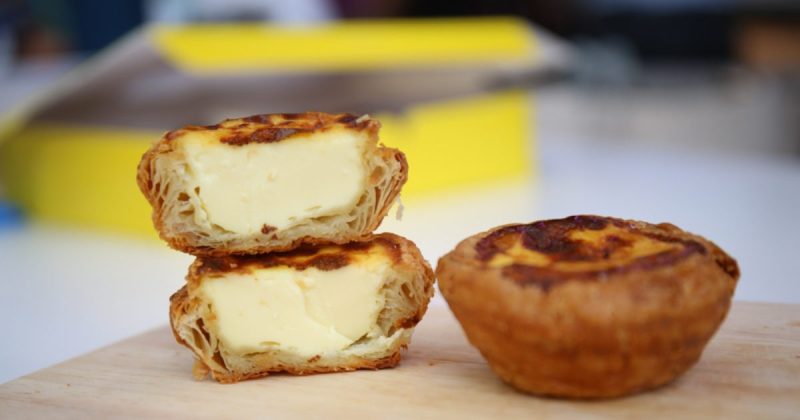 The Original (S$2.20 per piece) from Mother-In-Law Egg Tart is a Portuguese egg tart that is a rare find in Singapore.

The exterior was flaky and buttery, and due to air pockets in the crust, it was airy too. The filling inside contained egg, dairy, vanilla, and their secret ingredients, which turned this tart into a silky smooth concoction which was almost like silken tofu in texture.

There was a nice char on the top and each bite was fragrant, crispy and creamy. The original is the original for a reason. 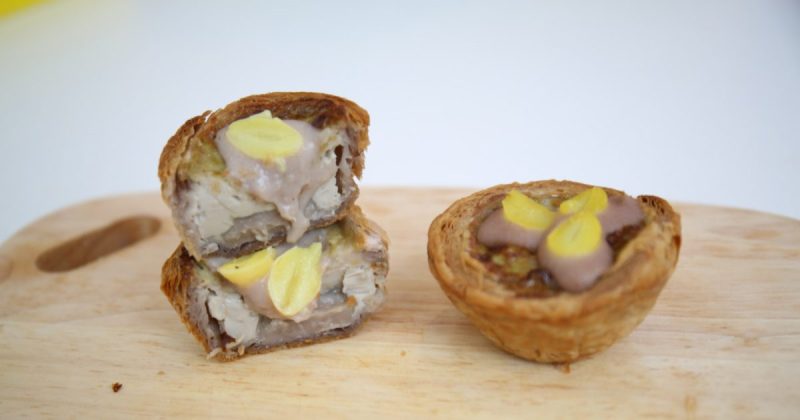 Mother-In-Law Egg Tart’s second most popular flavour is Yam & Purple Potato (S$3.40 per piece), which has both orh nee paste and purple potato.

The two ingredients complemented each other. The orh nee paste was not too sweet but the flavours were strong. If you’re wondering why the tart shell has a slight purple tinge, it’s because it was infused with yam during the baking process. It was topped with ginkgo nut, which added a hint of additional sweetness.

I can see why this was their second most popular flavour, as this tart would attract both the young and old with its comforting and familiar flavours. The Earl Grey Black Tea (S$3.30 per piece) can be mild tasting for some, but for me, it was just right.

The salty crust complemented the sweet filling, and the taste of the black tea balanced out the astringency of the Earl Grey. There was a piece of black tea mochi in the tart, which was chewy and sweet, and complemented the milder Earl Grey filling. 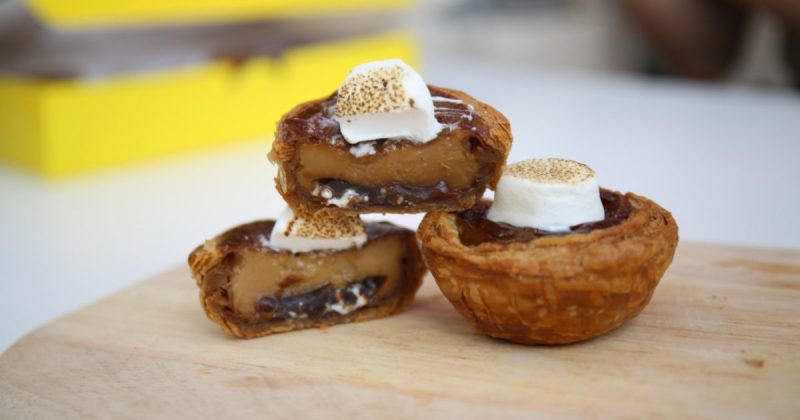 The Crispy Layers Coffee (S$3.30 per piece) tasted a lot like milk coffee.

Like the Yam & Purple Potato, the Crispy Layers Coffee’s tart shell was also infused with coffee powder. It had coffee-flavoured mung bean within the centre of the tart, which had a nice gooey texture. The tart was topped with marshmallows which lightened the strong coffee flavours. 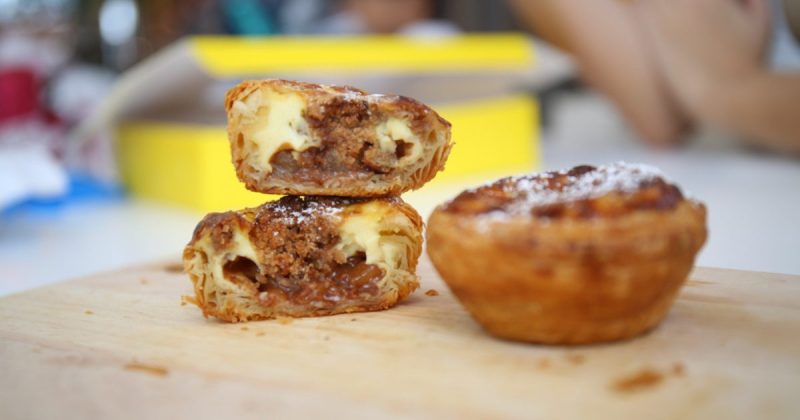 Crunchy Apple Cinnamon (S$3.30 per piece) pays homage to the original Portuguese egg tart, but to make it more suited to local taste buds, it was paired with apple crumble, which gave a nice cookie-like crunch to the tart. It tasted familiar, almost like McDonald’s apple pie filling, and paired well with the cinnamon, which made the tart taste like Christmas. 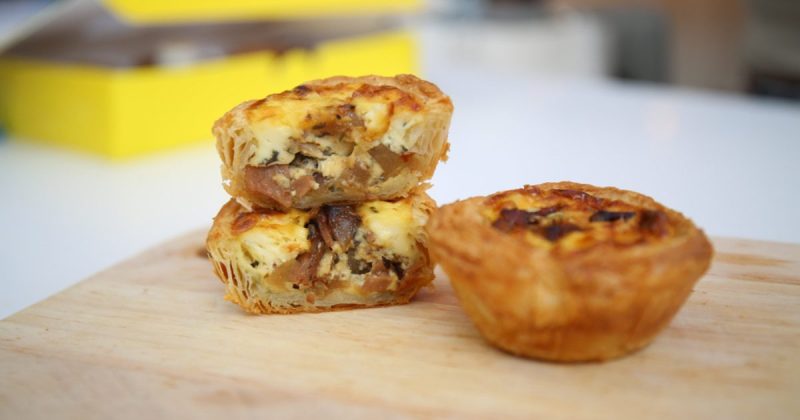 At the time of writing, Savoury Chicken Ham & Mushroom (S$3.50 per piece) was the only savoury tart Mother-In-Law Egg Tart sold, and it was delicious.

As a person who finds it hard to pair savoury and sweet together, this tart truly exceeded my expectations. It contained chicken ham, potatoes and mushroom, which were stir-fried together with a secret sauce and added to the batter. This tasted like a quiche’s filling in a tart.

It is definitely a rare find, and this will truly surprise many. All in all, this was a good savoury snack to eat. 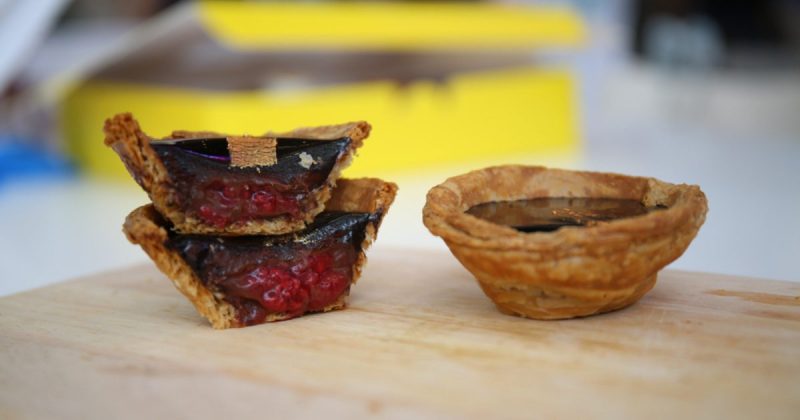 The Valrhona Dark Chocolate Raspberry (S$3.80 per piece) was actually not an egg tart at all. It was full of rich chocolate ganache and a sour raspberry filling, the latter of which helped to cut through the luscious chocolate. Gold powder was dusted across the top to give it a luxurious finish.

The chocolate tart had more of a crunch than the normal tart, and was less flaky. Though chocolate lovers might be able to down this tart in a single bite, I’d advise you to share this with a friend instead as it might be a little too decadent. It was as I expected — the egg tarts from Mother-In-Law Egg Tarts were simply delicious and even my companion heartily agreed. The savoury Chicken Ham & Mushroom was both our favourite, but the other six flavours did not fall behind at all. If both of us were to pass by this shop in a mall, we’d be going in to order some— no questions asked.