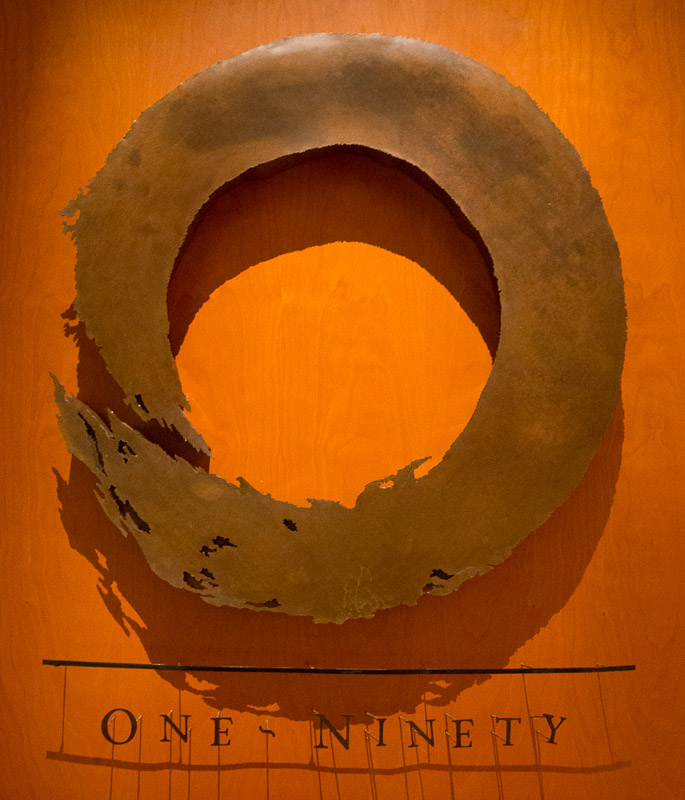 Newly remodeled One-Ninety restaurant is offering a champagne brunch and Mezze dinner that boasts air-flown steaks and ocean-fresh seafood likely to satiate those in search of a classy dine-in. Upon hearing of the Four Season Hotel bistro’s curated cocktail pairing, or Mezze, I quickly found myself seated at one of the couch seats anxiously awaiting the magical melange of meat and aperitif. Few can overlook the elegant layout that the One-Ninety nucleus has contrived with comfort and spatial abundance as its key considerations. The most notable element in the swank outfit is perhaps its open kitchen the Chef’s Grill, which allows patrons to scrutinize every move of the cooks hard at work over the brick oven and wood-fired grills.

A kitchen-side Chef’s Table, having all the trappings of royalty is also available to larger groups of up to 14. Headed by Executive Chef Giovanni Speciale and Senior Sous Chef Nicholas Owen, the kitchen endeavours to capture the very best flavours with grilling and searing over aromatic apple wood and mesquite. Whether this was to imply a revolutionary sophistication in the meats, I was to soon find out. 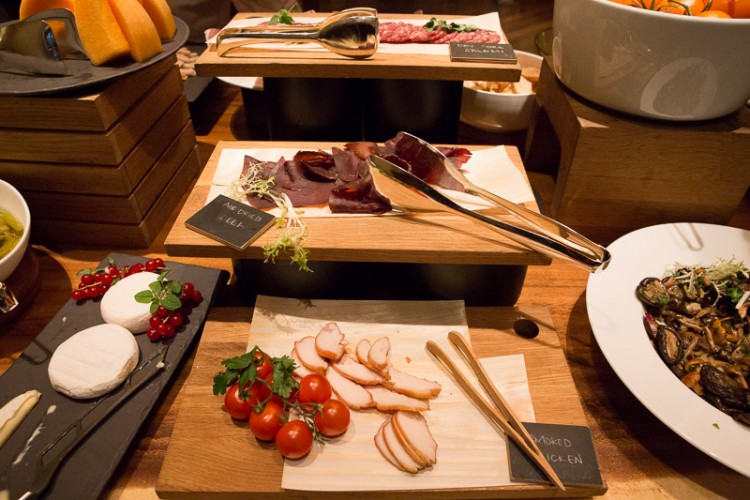 The mezze buffet at One-ninety is a semi-buffet, with access to the buffet spread and a choice of main course order. I found that there is an excessive amount to sample at the sumptuous appetizer buffet spread lined with the likes of seafood salads, grilled vegetables, and raw beef. This is not to say that it was far from enjoyable, but know that the main event was yet to be due. Nevertheless, I gravitated towards the lone salmon sashimi, raw sirloin with mustard paste, and grilled salmon with mustard herb. 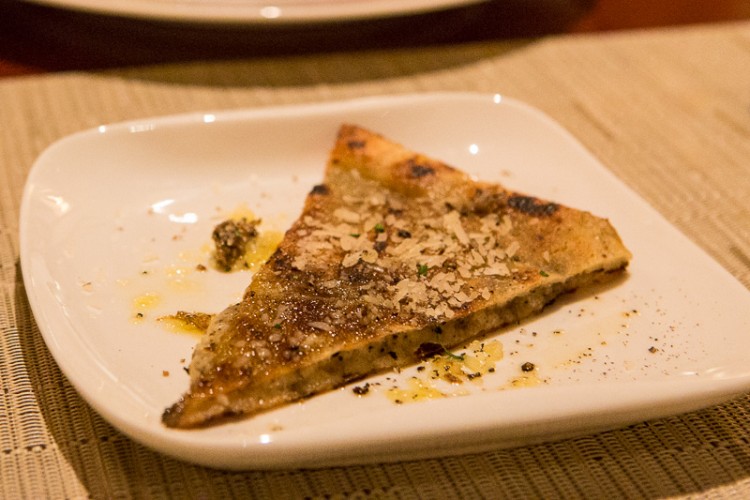 Truffle Foccacia. Previously a VIP-only dish, this black-truffle-infused slice stuffed with mascarpone cheese is now available on the a la carte menu. Being a big fan of cheese, it is suffice to say that I was blown away by the incredible aroma and explosion of cheese from every bit of my delicious slice. 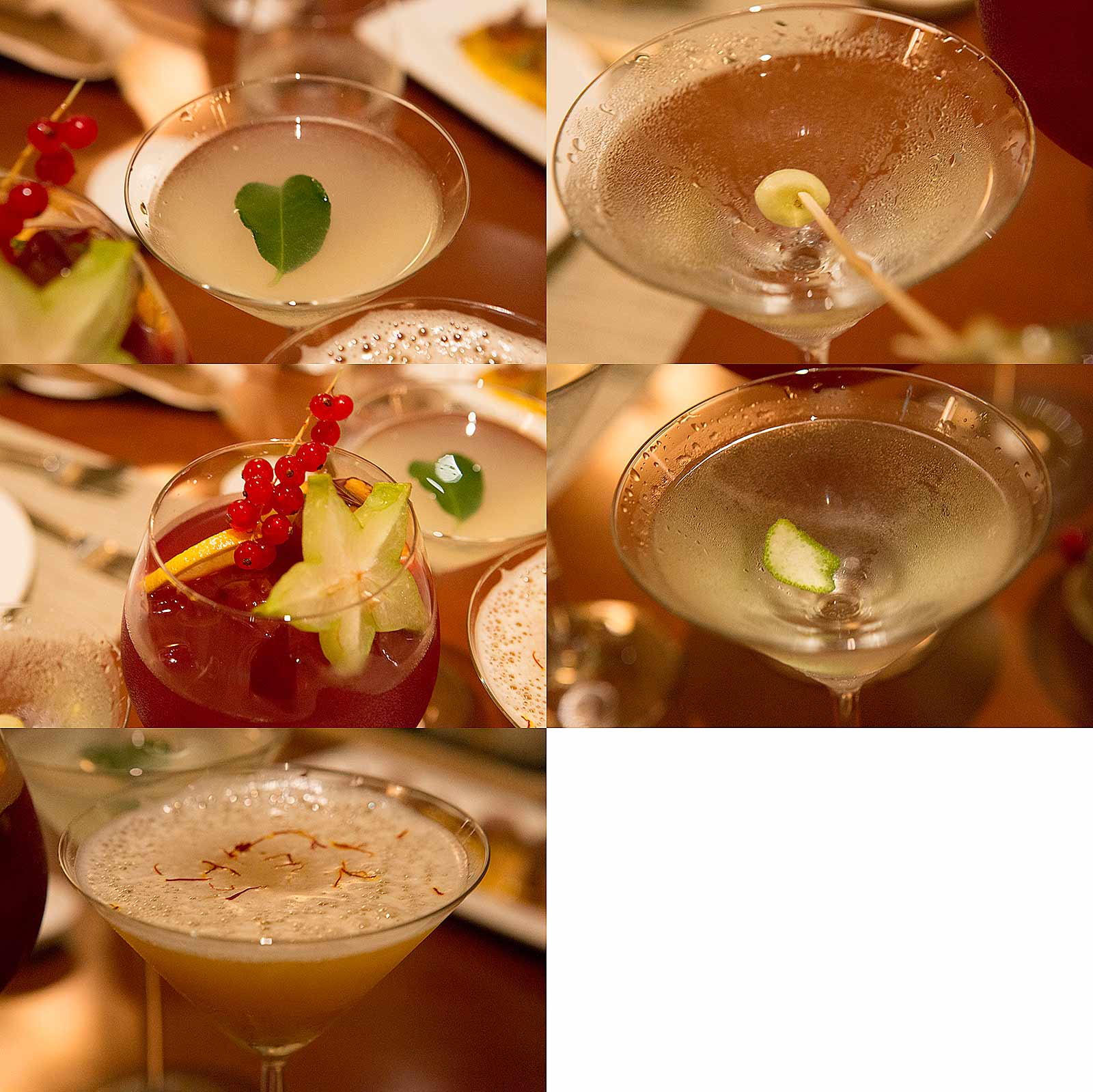 From top left: Wasabi Martini ($22), Dry Martini ($22), Singapore Sangria ($69 for pitcher; $23 for glass),  Gibson ($22), Thousand Nights ($23). We ordered 5 aperitifs that promptly arrived in a cohesive unit for the food pairings. The handcrafted cocktails at the One-Ninety Bar and Terraza are inspired by cocktail master Javier de las Muelas, and they would provide a stable buzz the rest of the way. Mooloolaba Wild King Prawns. This humble dish features just the aroma and texture from the wondrous grill that the chefs rave wildly about. Aside from its pleasantly giant form, I really liked how skin and meat are clearly distinct from each other, and found the smoky shrimp to go well with the balanced Wasabi Martini that introduces a minty and spicy aftertaste.

Mediterranean Sea Bass. Just as I had imagined, sinking my teeth into the crisp layer of skin drew the first cut into the particularly fresh and tender flesh within this coveted fish variety. With the gin-and-lime laden Gibson on the side, I probably could never have enough of this dish.

Red Label Organic Salmon “Tranche”. Though grilled salmon has a tendency to be slightly lacking in juice, rest assured that Four Season’s fastidious preparation of this Scotland-originating fish makes for a toothsome bite. I must make special mention of the creamy yuzu sauce (left) that tastes nearly identical to roe and gives dipped seafood the extra sour punch.

Strangely enough, it was difficult for me to match the cloying Thousand Nights with a particular type of meat. But I do believe the passion-fruit-imbued beverage can be effortlessly downed as a standalone glass. 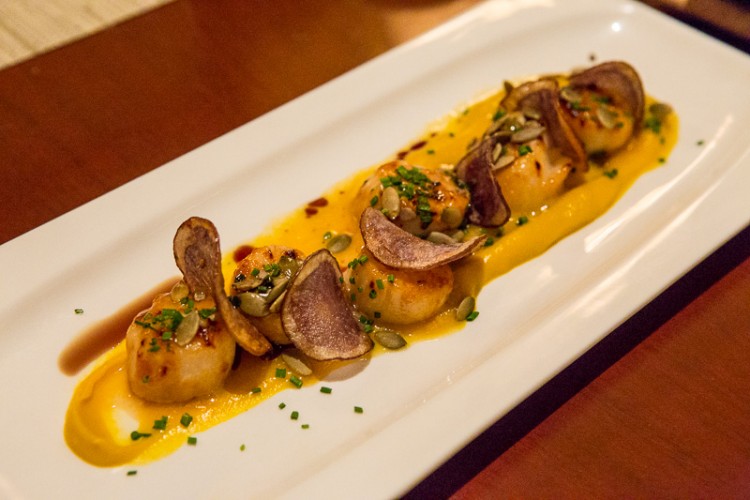 Miso-glazed Hokkaido Scallops with Japanese Pumpkin Puree and Purple Potato. The exquisitely designed dish attempts to seal the sweetness of pumpkin in rich scallops littered with nuts and spring onions. Innovation aside, I would readily have passed on this for other more delectable choices around, though I did find the fruity blend to nicely pair with the classic Dry Martini, which contrasted with its strong, dry notes. Tomahawk Ribeye ($156). This 200-day grain-fed Black Angus repeatedly undergoes a smoky recycling of its own drippings on the fragrant firewood underneath to produce a succulent steak au jus that I easily devoured with sheer delight.

I concluded that the tropical twist with the use of local offerings like dragonfruit on the medium-bodied Singapore Sangria adequately complemented all the dishes, but none more splendidly so than the red meat above. In fact the Sangria is easy and good enough to just drink on its own or most anything else. 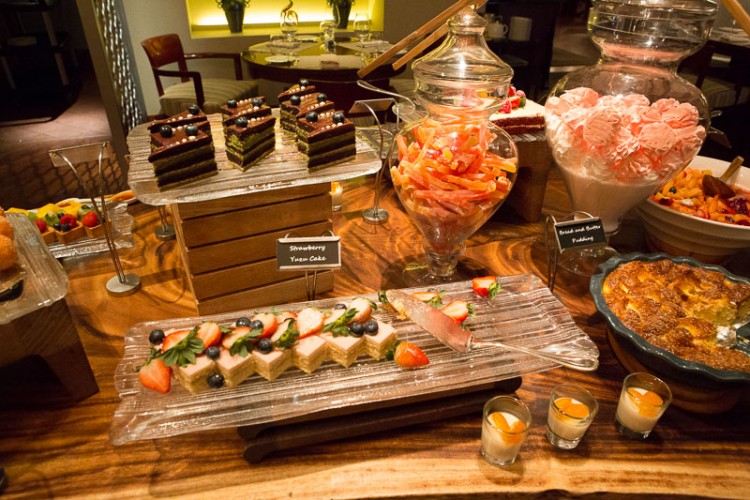 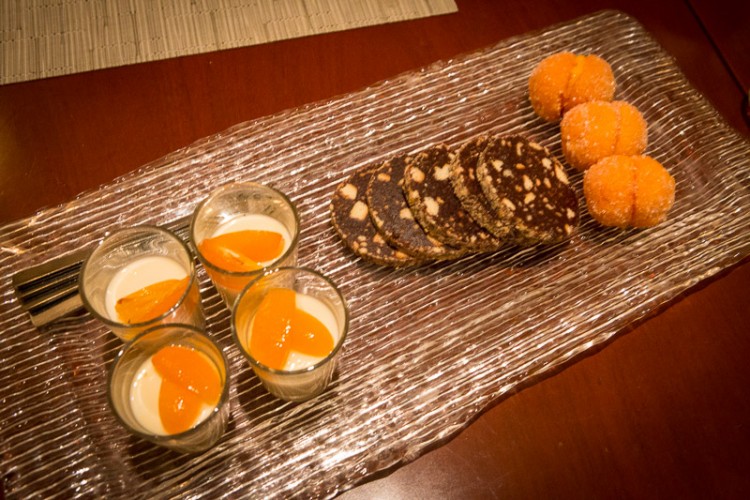 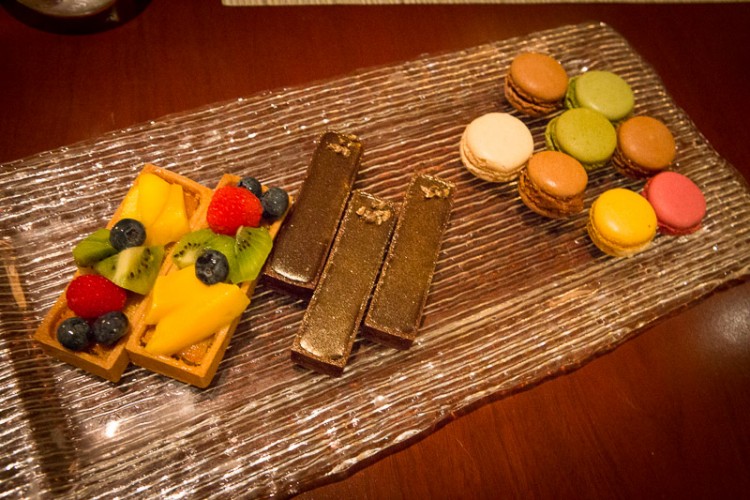 The choice of desserts was just as multifarious as what we were afforded for appetizers, having everything from crème brûlée to red velvet to macaroons. Something perhaps worth noting is the coated chocolate bar, served with a macadamia nut for good measure. In spite of all the restaurant’s grandeur, it’s encouraging to hear of how affordable the lunch and dinner deals are. Whenever you might be planning a barbeque in the future, maybe take a few minutes to consider if you’d want to try the indulgent wood-fired delights at Four Seasons Hotel for a reasonable price upgrade.

$49++ for Mezze lunch buffet including one main selection

$58++ for Mezze dinner buffet, including appetizer, dessert buffet spreads, and one main selection 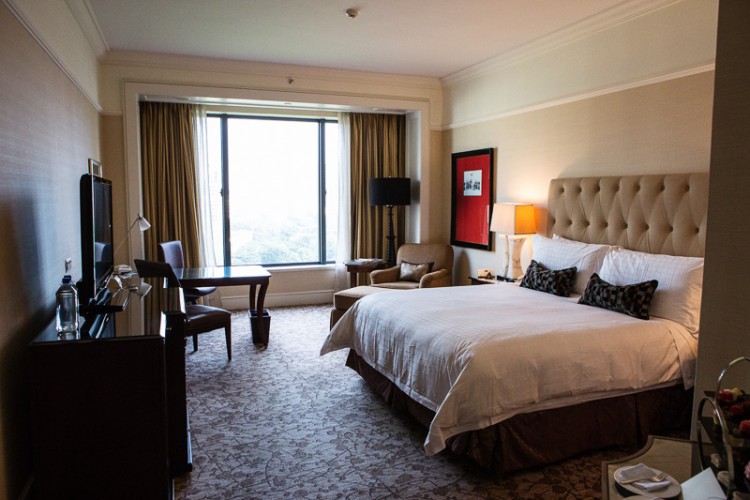 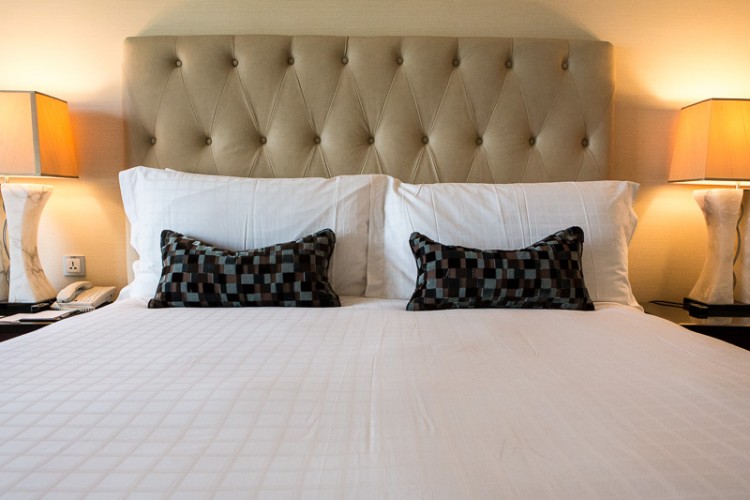 Taking a sneak into the rooms available above One-ninety restaurant, the rooms are chic and modern with a full marble bathroom. With its clean furnishing and ergonomically designed work desk, the rooms are suitable for both executive work as well as recreation. Four Seasons Hotel Singapore offers sky-high luxury with the unveiling of its revitalized 20th floor resort-style pool and event venue. Perched on the 20th floor rooftop of the hotel, the area is transformed into an urban oasis, where guests can enjoy sun-soaked swims under the tropical sky, made complete with handcrafted drinks and culinary delights.

With this re-launch of the Hotel’s integrated rooftop meeting destination venue and its luxurious rooms, guests can expect a comforting experience during their stay at Four Seasons hotel Singapore.