Holland Village is a quaint hubbub of tourists, bars and cafes. But under the roof of Holland Piazza (previously the Holland Road Shopping Mall otherwise known as the Windmill Building) lies Oporto — an Australian fast food chain famous for its flame-grilled Portuguese-style chicken. Dating back to 1986, Oporto was founded by Antonio Cerqueira who ventured into North Bondi, Australia to share mouth-watering spices from Portugal with his friends and the local food scene.

Along the journey, Antonio and his wife Adelina, created the legendary chilli sauce which enticed people from all over Sydney for a taste. Even 1,000 litres of the sauce was barely enough to satisfy the demands! Once I stepped into the 30-seater restaurant, a whiff of spices and freshly-grilled chicken hit my nostrils. Just like that, I knew I was in for a good time. The interior features earthy tones of green and wooden counters and communal tables with fun cork-shaped seats. There was plenty of sunlight cascading through the large glass-panelled windows but the lamps hanging from the ceiling decorated with vines illuminated the dining area even more. Normally, I’d begin with a savoury starter but we decided to nibble on Churros ($2.50) before the chicken and burgers came. The rings of churros were coated with a sheen of cinnamon and salted caramel sauce respectively. Biting into the crispy layer, the Churros was doughy yet chewy and not excessively oily (to my pleasant surprise). The cinnamon sauce wasn’t too sweet but didn’t exude much of the spice either, which led my fingers to reach for the caramel-drizzled churros instead. Half brush-basted with Lemon & Herb and the other with Original Chilli sauce, the chicken thigh-and-drumstick (you can opt for the breast-and-wing portion as well) had a nice gleam with visible grill marks. I was especially excited for the chicken with Original Chilli sauce, which turned out to be refreshingly tangy with just the right amount of fiery spice.

But I’d have to say the Lemon & Herb sauce won me over with its sweeter and more delightful fragrance of fresh herbs, which were thoroughly infused into the meat. The chicken was juicy and tender, with smoky accents of the grill — so yes, I’m definitely going back for more. While fries are the best partner-in-crime to a burger, there are also other options such as spicy rice, white rice, crunchy slaw and grilled corn. Sandwiched between a pair of good ol’ sesame buns were sizeable fresh-grilled chicken breast fillets, shreds of lettuce, melted cheese and creamy mayo along with the Original Chilli sauce.

It is regrettable that the patty was dry and too mushy to be their signature; I much preferred the grilled pieces of chicken. The chicken pieces of the Bondi Bites were tender and well-marinated with a tangy flavour, albeit pretty oily, while the Spicy Chicken Bites reminded me of a gourmet version of KFC’s popcorn chicken with a hint of spice. These snacks are served with a choice of their house-made sauces (additional $0.50 each). And guess what, catering to our local tastebuds, they created the Garlic Dipping Sauce.

Well, all I can say is, they’ve done a pretty good job because the creamy, sweet garlic was my favourite out of the four. Yet another snack we had was the Chilli Cheese Chips ($5.90). All their fries are flown in from the States and are blanched and fried on the spot, then glazed with gooey cheese and chilli.

The huge portion’s definitely for sharing unless you don’t mind the carb overload. At this point, it felt like my stomach could burst but I couldn’t miss their Chicken Taca Bowl ($9.90). The taca (Portuguese for bowl) consisted of lettuce, crunchy slaw and grilled chicken tenders atop a bed of spicy Mexican rice with your choice of sauce. The crunchy slaw lightened the heavy dish with slices of red and white cabbage and carrots. On the fluffy yet dry rice, the chicken was tender but was rather on the soggy end.

Overall, the taca wasn’t as much of a crowd-pleaser as compared to the rest of the mains on the menu. 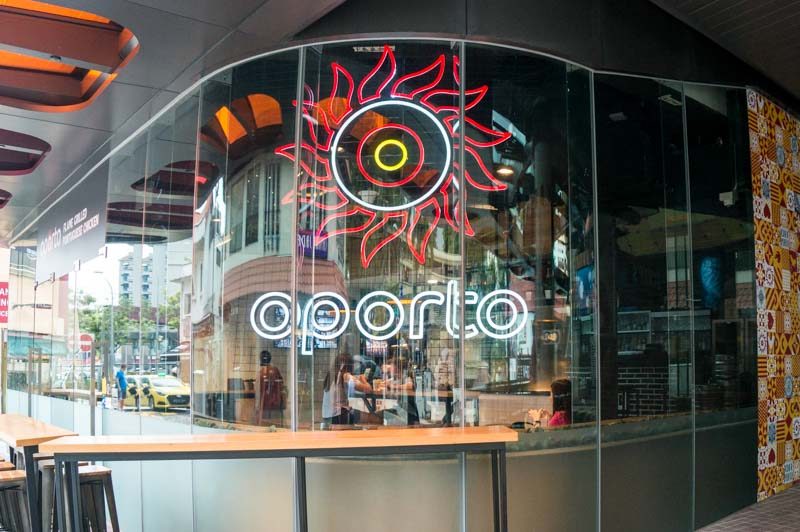 As a fast food chain, Oporto grills up some delicious chicken with a range of unique sauces. If you frequent the HV neighbourhood and have run out of food choices and money, why not gnaw on some flame grilled juicy chicken thighs?

5 Korean Snacks on Shopee to Bring out Your...