Milk or no milk is a common question when ordering and talking about Fish Soup Bee Hoon or 鱼片米粉 in Singapore. Some point to the question as a matter of health – a lighter soup without the extra saturated fat in full cream evaporated milk is much better for weight watchers.

However, among Fish Soup hawkers, not adding milk is a source of pride. Some put it on their menus, telling customers that they are serving the ‘real deal’, serving soup the traditional way.

In my investigation into the origins of Fish Soup Bee Hoon, I am aided by Chef Hoe Gern from No Milk Bistro, a modern European bistro serving dishes with Asian twists and their signature Teochew style Fish Soup.

What’s The Essence Of Fish Soup?

To trace the origins of the dish requires an understanding of what makes the dish. Its “essence”, so to speak. Modern versions of the dish are served single bowl; soup topped with fish slices or fried fish, tofu, green vegetables, tomatoes, sometimes dried seaweed and ikan bilis (dried anchovies).

Garnishes of spring onions and fried onions may also be added, and sliced chilis with soy sauce, or chilli sauce is served by the side in a dipping saucer. Some hawkers also ask if you want milk in the soup, referring to evaporated milk.

As hawkers selling Fish Soup Bee Hoon also serve Fish Soup, it isn’t hard to conclude that the soup is its “essence”. This is confirmed when I asked Chef Hoe Gern for a minimalist version of the dish, for which he answered, “just the stock”.

A creamy, opaque soup is entirely possible even without the addition of milk.

Cooking bones in water dissolves water-soluble proteins and converts collagen to gelatin. Further cooking concentrates the stock as water evaporates, creating an emulsion that gives the stock a milky texture and appearance as fat, marrow, calcium, other minerals and proteins gets dispersed in water. Chef Hoe Gern says this takes 45 minutes to an hour, and further cooking wouldn’t do much for flavour.

Is Fish Soup Teochew? Or Canton?

Fish Soup is said to be a Teochew dish, and while evidence is sparse, the addition of evaporated milk is said to be of Cantonese origins. Chef Hoe Gern talked about a possible Hong Kong connection, though he later dismissed it. I thought it might not be too far from the truth.

In the 1920s, Canton was renowned for its food, with the saying “The food is in Canton” (食在廣州). Hong Kong, having a Cantonese majority, was a culinary hub that received Canton influences and continued to refine its culinary scene even when culinary knowledge stagnated in China because of the Cultural Revolution in 1949.

British colonial rule introduced milk imports, and it is not hard to see the culinary exchange between Hong Kong, Malaysia and Singapore as a possibility.

In Chaoshan, where Teochews come from, there’s a saying “好鱼马鲛鲳，好菜芥蓝薳，好戏苏六娘俗语”, which translates to “Spanish Mackerels and Pomfrets are good fish, Kailan are good vegetables, and Su Liu Niang good Operas”.

With a little bit of common sense, reading on Mainland Chinese recipes, and Chef Hoe Gern showed that the choice of fish isn’t the most important – it’s the freshness of the fish.

The fish available here in South East Asia and China are different, so naturally, the fish choices differ. However, some fishes are still avoided if they are found to be not as suitable for making stock. Teochew, or Chaoshan cuisine places emphasis on natural flavours, so using only the freshest fish makes a lot of sense.

Teochew (or Chaozhou in Mandarin, as Teochew is just one transliteration of the dialect) Cuisine originates from the Chaoshan region in Guangdong, China, mainly in the Chaozhou, Shantou and Jieyang cities. You may be confused that Teochew Cuisine (or Teochew people) doesn’t just come from Chaozhou.

The modern Chaoshan region actually used to be called Chaozhou (that is, Teochew) before the Chinese Communist Revolution, being comprised of eight cities called the Chaozhou Ba Yi (潮州八邑) or Chaozhou Ba Yang (潮州八阳). After the revolution, this was later rearranged to become the three cities of Chaozhou, Shantou and Jieyang with political changes.

For the early (after 1819) Singaporean community of Teochews, many worked in the fishing industry as fishermen, boatmen, or fishmongers, eventually becoming leaders of the kelong industry. They also sold vegetables, rice, fruits and related items, food wise.

Early Teochews could also have come from Riau islands of Indonesia and Thailand (Siam as it was called back then).

Tracing Fish Soup To Its First Appearance in Singapore

Not Just a Good Food Guide: Singapore by Naleeza Ebrahim credits Swee Kee Fish Head Noodle House (AKA Ka-Soh) as creating the definitive version of the dish in the 1970s.

Focusing only on the stock, the logical lead would then be Fish Head Steamboat or 鱼头炉, another dish that is believed to be Teochew. It doesn’t seem hard to speculate that Fish Soup Bee Hoon is the single serving or one-pot meal version of Fish Head Steamboat, by adding noodles. Nam Wah Chong seems to be the earliest establishment serving the dish, since 1927.

iEatiShootiPost’s conversation with Nam Wah Chong’s owner seems to indicate that Fish Head Steamboat is something brought over from Swatow or Shantou 汕头. In Swatow, steamboat isn’t commonly served, though fish soup is supposedly found there.

Researching online about fish soup doesn’t seem to indicate any time periods for Fish Soup and the related dishes. If you were to judge based only on travel websites and blogs, Fish Soup wouldn’t even appear to be a Chaoshan speciality, though it appears to be a regularly home-cooked dish or 家常菜.

Then moving away from Chaoshan, Jiangsu Cuisine of Hangzhou, there is a dish called Fish Head Tofu 鱼头豆腐. A story goes that in Qianlong’s six personal visits to Jiangnan during the 18th century, he took a rest in Wushan Tianfeng due to downpour, stopping by a house. In some versions of the story, he was invited into the house and in others, he went in asking for food.

The true purpose of his voyages to Jiangnan is a pretty debated one that even movies were made romanticizing about it. The owner of the house used ingredient scraps, including Fish Head and Tofu (some versions of this story added Doubanjiang), to create Fish Soup.

Qianlong found it so delicious he came back again the next year, this time revealing his identity as Emperor and giving the name “皇饭儿” to the dish for the illiterate shop owner.

From then on, the dish known as Qianlong Fish Head (乾隆鱼头) or Huang Fan Er (皇饭儿) started to gain reputation. The restaurant owner was apparently called Wang Run Xing 王润兴. 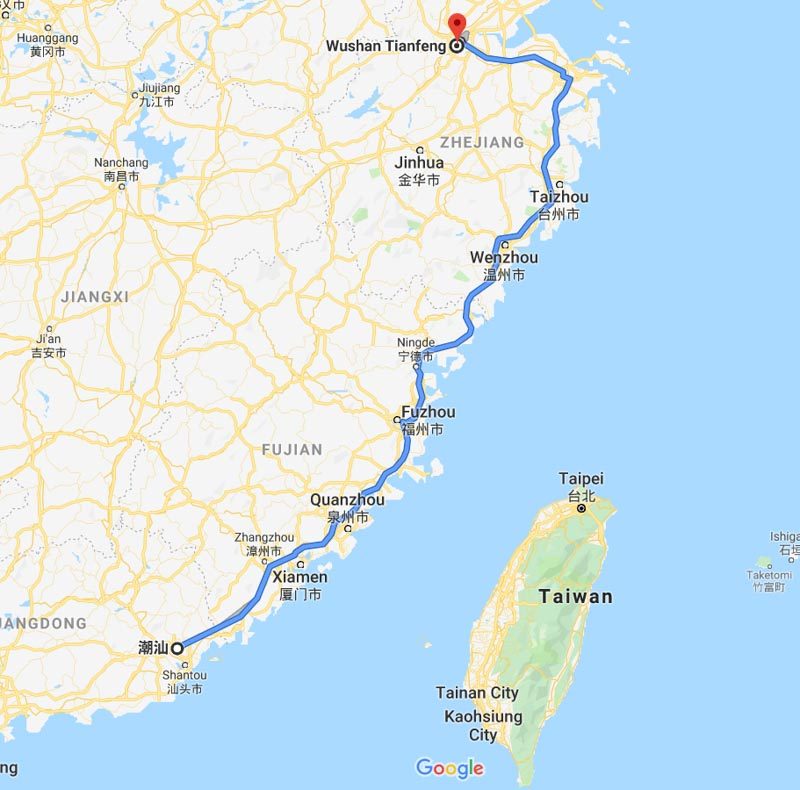 This appeared to be a good lead, but Qianlong naming and giving fame to a dish along his way to Jiangnan is a common story, from Suzhou’s Fengzhen Noodles (枫镇大面) to even the famed Xiaolongbao.

Wang Run Xing 王润兴 doesn’t seem to be famous, though it appears that there is one restaurant named so that opened in the 1840s. Perhaps Qianlong did visit the restaurant and the company was only registered half a century later, or perhaps it was a fake story.

Although this smells like a marketing ploy and not solid evidence, it did show that Teochew Fish Soup had an earlier version in Hangzhou. Interestingly, the path drawn from Hangzhou to Chaoshan is very similar to the migration path of Teochews for an existing theory that Teochews had migrated from Henan.

Teochew ancestors have probably been eating fish for millenniums, and beyond this Qianlong story, it seems difficult to trace the dish further back without more academic evidence that may or may not exist in China. More evidence could also possibly be found in Riau and Thailand.

To be fair, making a fish soup with fish head and tofu doesn’t seem to be a very revolutionary idea that requires millenniums of experimenting. But through the above, we now understand that the modern Singapore version of Fish Soup Steamboat and Fish Soup Bee Hoon are not easily found in other countries, and can wholeheartedly recommend them to our foreign friends as a purely Singaporean dish.

If you’re now in the mood for some fish soup, check out our 12 Best Sliced Fish Soups 鱼片汤 in Singapore.

This article was written by Victor Fong