The word “Raven” evokes an image of a jet black bird, an impression of darkness and mystery, and Gothic writings of the American writer Edgar Allan Poe.

In Chijmes, you will now find an alternate embodiment of raven itself – a new restaurant called Raven, decorated in majestic black marble decor, serving an all-new but somehow mysterious cuisine of The New Americas, a rare combination of Northern and Southern American food with the oriental tastes of Asia. 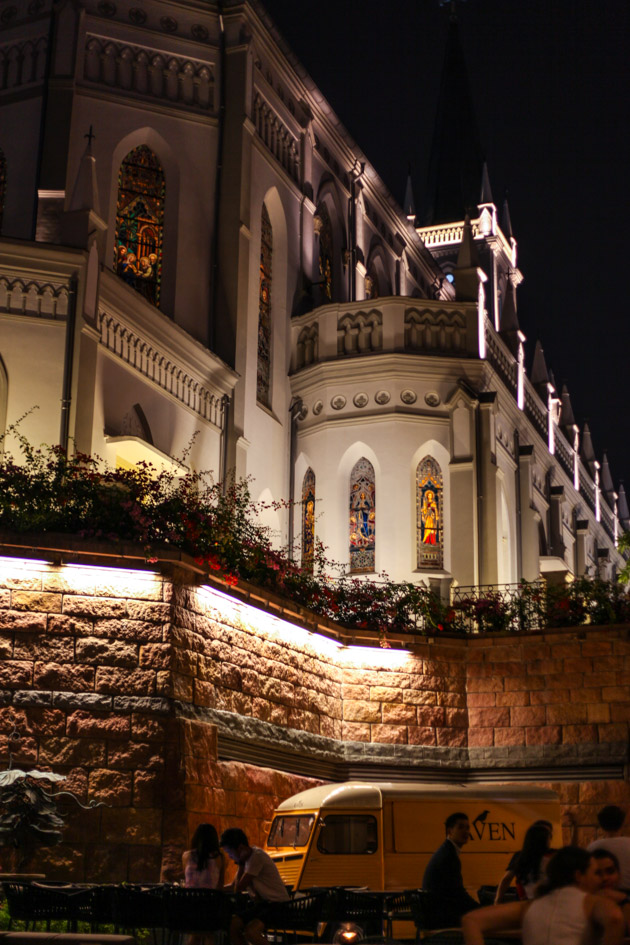 Raven is the brainchild of Guy and Gordon MacGregor – the same people who has brought us House of Dandy, one of Singapore’s most trendy cocktail bar. Their concept is to simultaneously contrast and blend to the atmosphere of Chijmes – you can enjoy the Raven’s signature cocktails and other alcoholic beverages like most Chijmes patrons while given a choice to affordably dine with style and demure at their restaurant. The man behind Raven’s daring menu is Head Chef Sam Chablani whose past experiences included Michelin-starred Chef Daniel Boulud’s db Bistro Moderne in New York City, 1-Michelin-starred Gotham Bar & Grill, The Halia at Singapore Botanical Gardens and Lolla. His forte is his meticulous attention to detail and he is very adept at the grill.

I will introduce to you some of his creations that range from small plates, mains, pastas and desserts. You will be enthralled by what Chef Sam is capable of – he is a Singaporean native with a flair for colliding gastronomic culture and style. 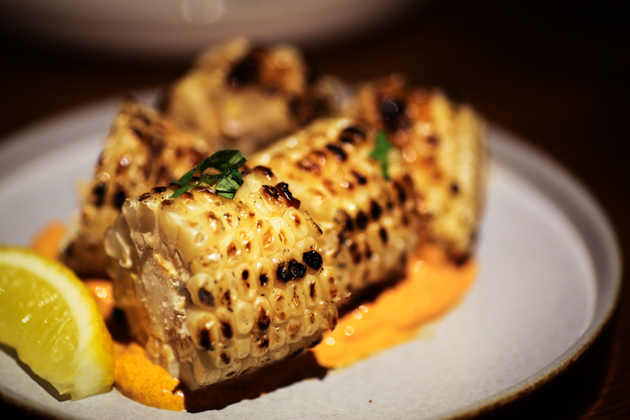 Firstly, the small plates – something light and easy like the Roasted Corn Niblets ($12) or the Fried Chorizo Croquettes ($13) is a good way to get your gastric juices flowing.

I have particularly loved the Roasted Corn Niblets for the way its smoked sour cream is blended in a concoction of spices – chilli, paprika, cayenne and oregano, all in South American styling. Wrapping the sweet tasting corn with this spicy, smoked sour cream gifts you one of the most addictively tasty appetiser you have ever had! 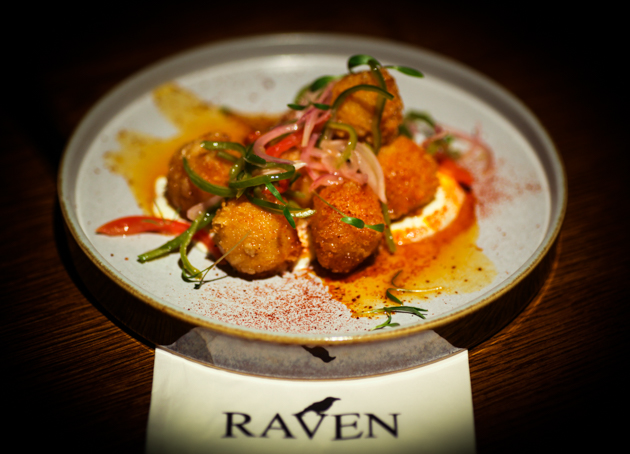 The Fried Chorizo Croquettes are expertly triple-fried and served with a tongue-tantalizingly tangy jalapeño vinaigrette and pico de gallo. These croquettes have this peyote-like addictiveness that you’d find it hard to stop. Washing it down with Raven’s Signature Cucumber Rickey does not help either – you will now crave for more of their cocktails. 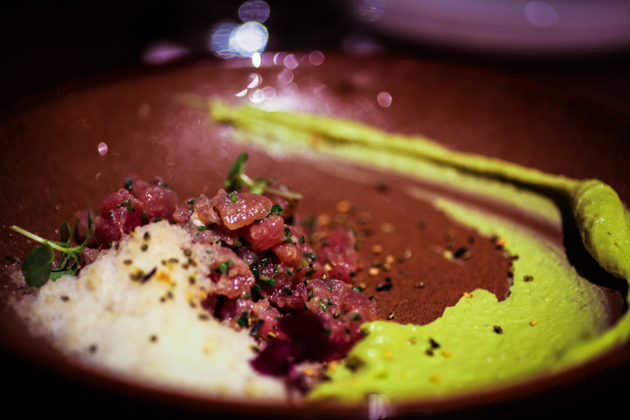 For those who want something from the sea, may I recommend you the Tuna Tartare ($17) and the Steamed Little Neck Clams ($16). The Tuna Tartare is done a la orientalé – Avocado wasabi puree that has a very gentle sting that is tamed with yuzu, soy vinaigrette and frozen pear shavings.

Take a small but adequately generous amount of the avocado wasabi puree with the tartare – you would actually be pleasantly surprised at how subtle the wasabi element is. 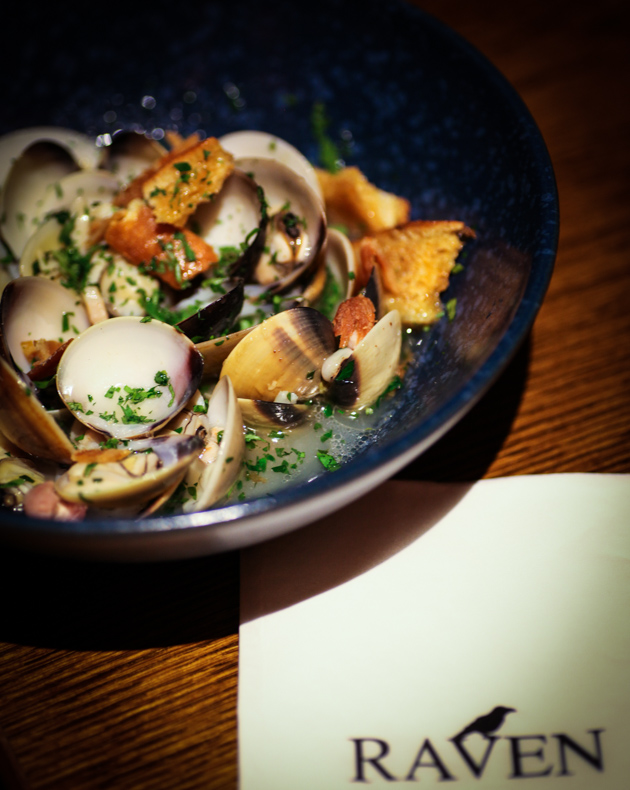 The pot of Steamed Little Neck Clams is comfort food, for me. At the end of a long hard day, I want something soothing but with some element of pick-me-up – the bacon dashi (white wine with bacon broth) and clams are sautéed with bacon and garlic, and garlic croutons added over it.

Sip gently on its broth and savour its flavour with the clams – this will take all your worries away. The soothing effect is augmented with sips from any of the cocktails on offer. 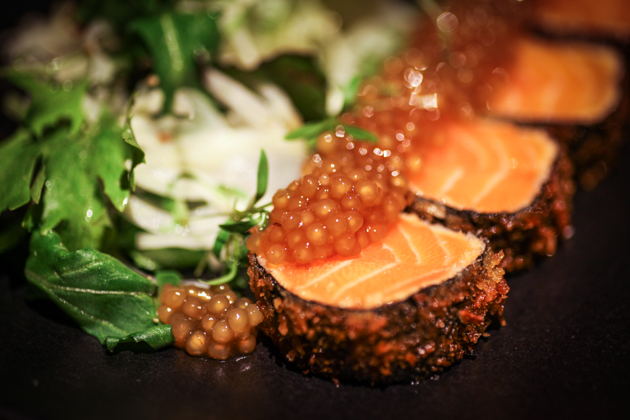 For the choice(s) of the mains, I went straight to the meats. The Crispy Nori Wrapped Salmon ($29) is one of the best looking, most meticulously prepared mains I have had this year.

The salmon is expertly panko crusted (Japanese-style breadcrumb coats the salmon) and then gently fried while retaining the salmon pink and tender texture. I love this dish for three reasons – its technique of preparation, its taste and texture, and for being so Instagramable. 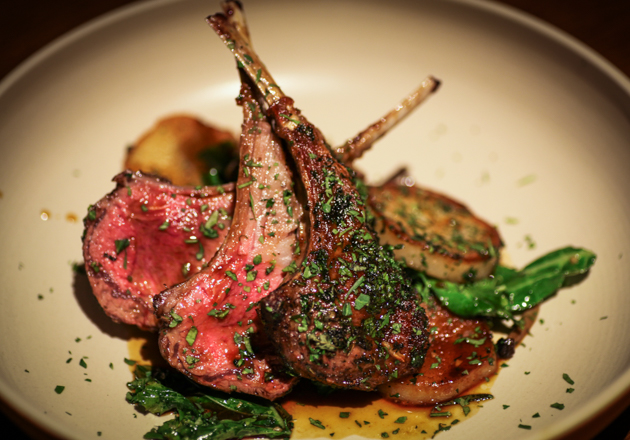 The lamb meat lovers would rejoice at the sight of the Herb Crusted Rack of Lamb ($37) – made of Victorian lamb from beautiful New Zealand, basted in garlic and butter.

The accompanying potatoes are lamb-fat-roasted and further complimented with Honshimeiji mushrooms that have been roasted and glazed in chicken stock and finished with raw garlic and rosemary. This is the level of detail that Chef Sam consistently puts into each of his dishes. 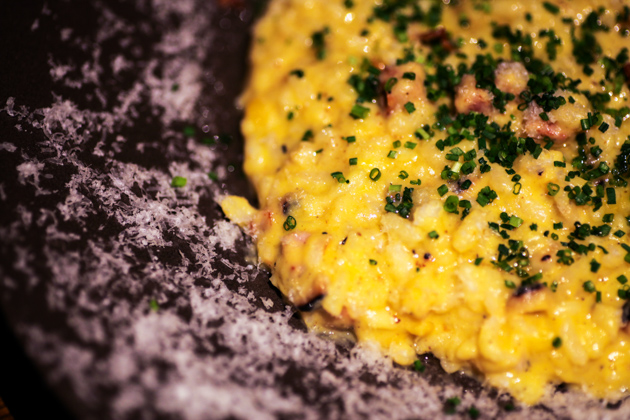 For those who prefer a main dish that is less meaty, you could opt for the Bacon and Sweet Corn Risotto ($21). It is made with Manchego, which is a cheese made in the La Mancha region of Spain from the milk of sheep of the manchega breed and is aged for between 60 days and 2 years. This is a very pretty dish, although the corn in the pasta was just a little too sweet for me. Take it with the crispy bacon to take the edge off the sweetness.

Raven’s pastry chef has prepared a list of desserts and there is always a case of so many desserts, so little time (and tummy space). I will make it easier for you by making these two recommendations – the Green Tea Opera ($13) and Chocolate Overdose ($13). Both are very beautifully made and are adequately sweet. 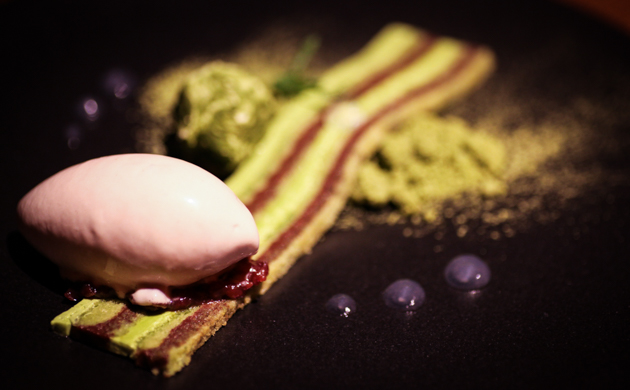 The Green Tea Opera is reminiscent of a Japanese zen garden. It is, after all, made up of green tea and chocolate truffle with Azuki bean ice-cream and sake gel. It is zen-fully sinful and not too sweet either. 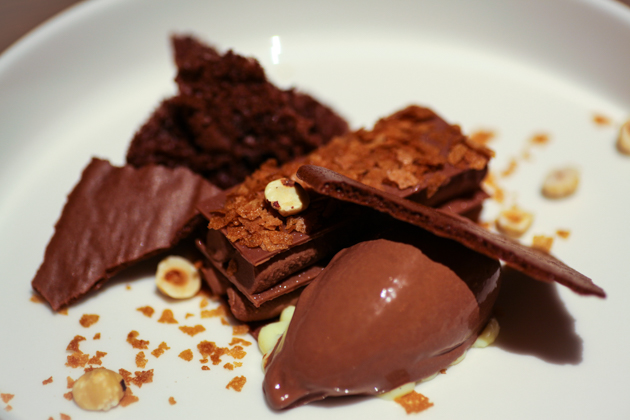 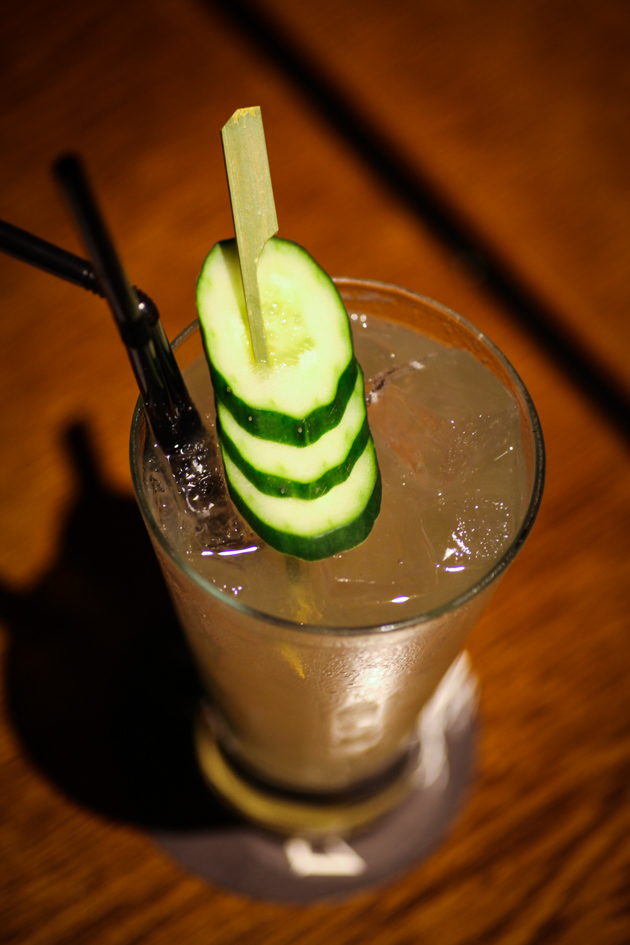 For those who are happy to proceed to their al fresco area, you could soak up the atmosphere with Raven’s happy hour offerings of Somersby on tap or bucket deals from $50 for 5 beers. I would also like to add that the cocktails from their bar are exemplary. Their cocktails (all $17) take inspiration from The House of Dandy – try the Agave Smash, Cucumber Rickey (pictured above), Elder Presidentes or Maple Leaf Sours. You can’t go wrong with any of these. At the end of my dining experience at Raven, I could say that I have been very pleasantly surprised by the quality of their offerings. Their location among a bevy of clubs and pubs initially lowered my expectations but I was proven wrong.

My heart has also been captured by their deco that runs consistent with the theme of Raven – the dark marbled bar with sculptures of raven and that Alec Monopoly grand piano art piece did so much to give Raven’s patrons a feel of an modern urban restaurant set in the 1920’s period.