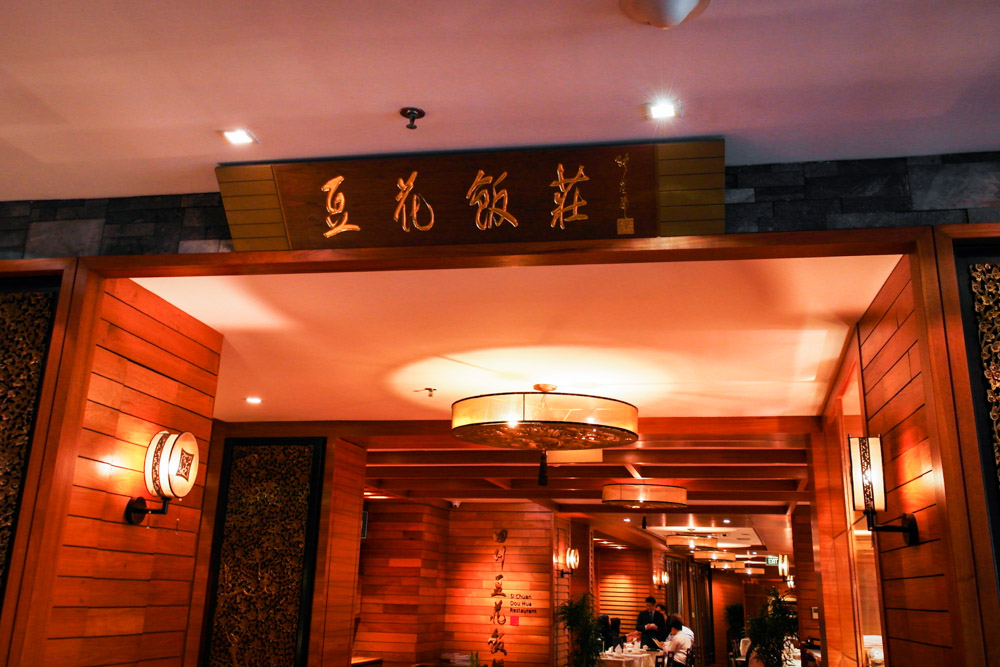 In the Si Chuan mountainous region, there is not much sun and the natives depend on spicy chilis and peppers to keep themselves warm. The Chinese also believe that sweating drains out toxins, and thus the signature spicy Si Chuan cuisine was born. 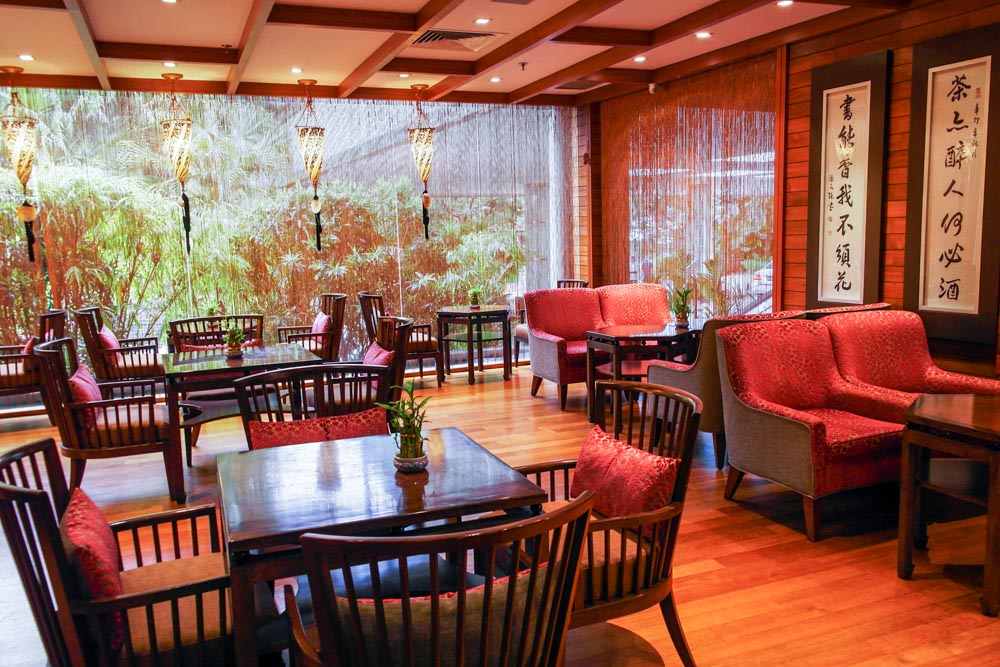 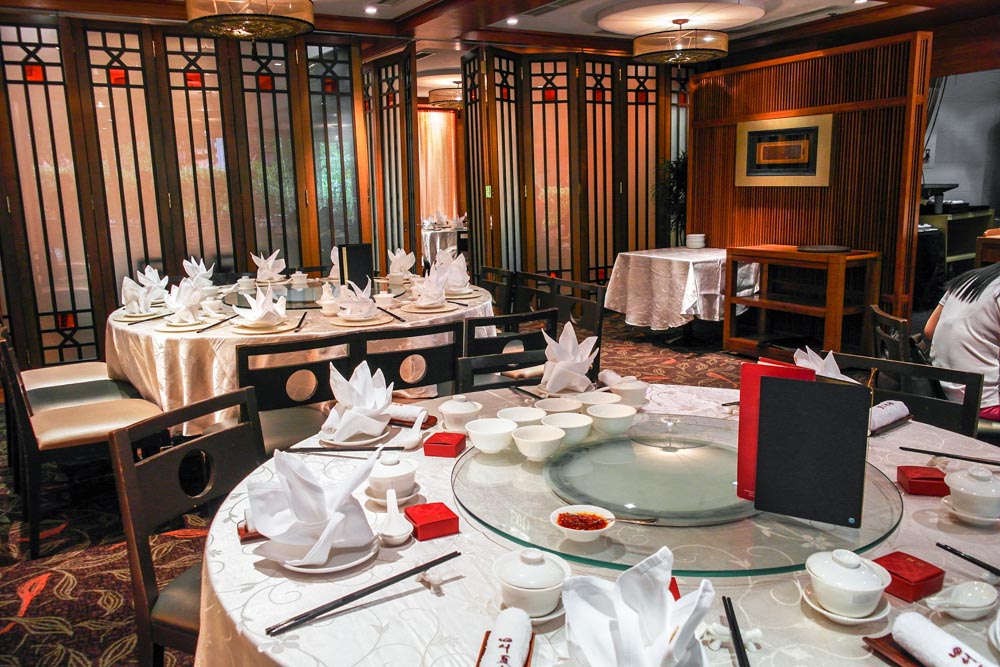 Centering on authenticity, the restaurant’s interior further accentuates a traditional ambiance and mimics an old Chinese tavern, albeit much classier.

Although I’m not a fan of either spicy or tofu, and I was seriously considering whether to even put myself through this, Si Chuan Dou Hua restaurant did catch my attention when it was recommended by a chef while I was working on another restaurant guide. So what the heck. 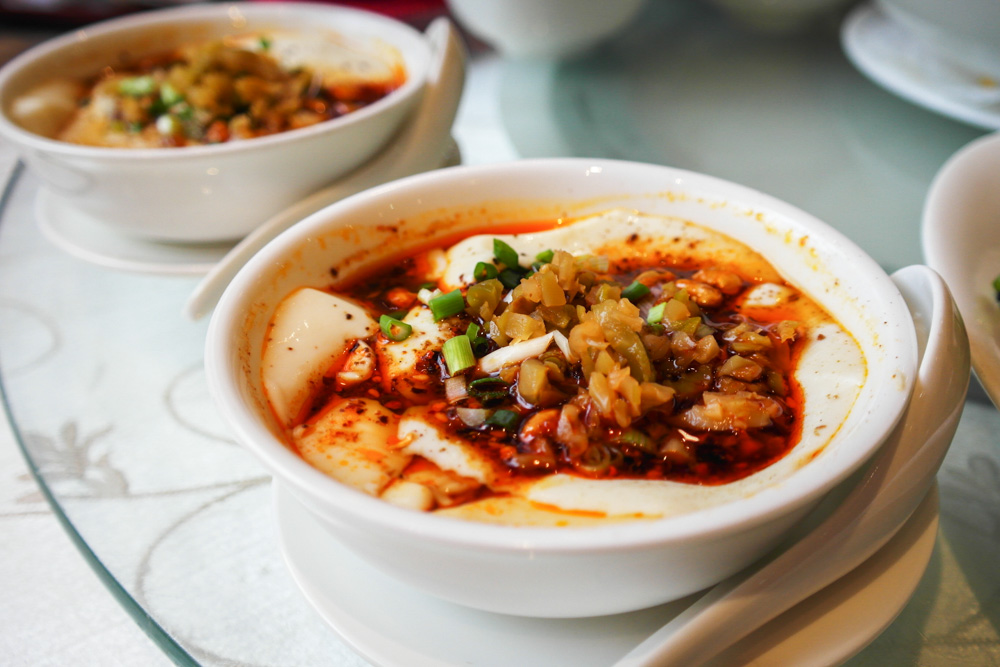 Bean Curd with Sichuan Chili and Pepper Sauce 麻辣豆花 ($3.50). A common appetizer in China to start off the meal, the chili has a sort of delayed effect, so don’t rush it. Also has pine nuts for a bit of a bite rather than just being soft. Sliced Pork in Garlic and Chili Sauce 蒜泥白肉 ($12). Although the lean pork is used, the meat was very tender and fragrantly doused in chili oil. Originally the recipe called for pork belly, but due to rising local demand for healthier options, lean meat is used. 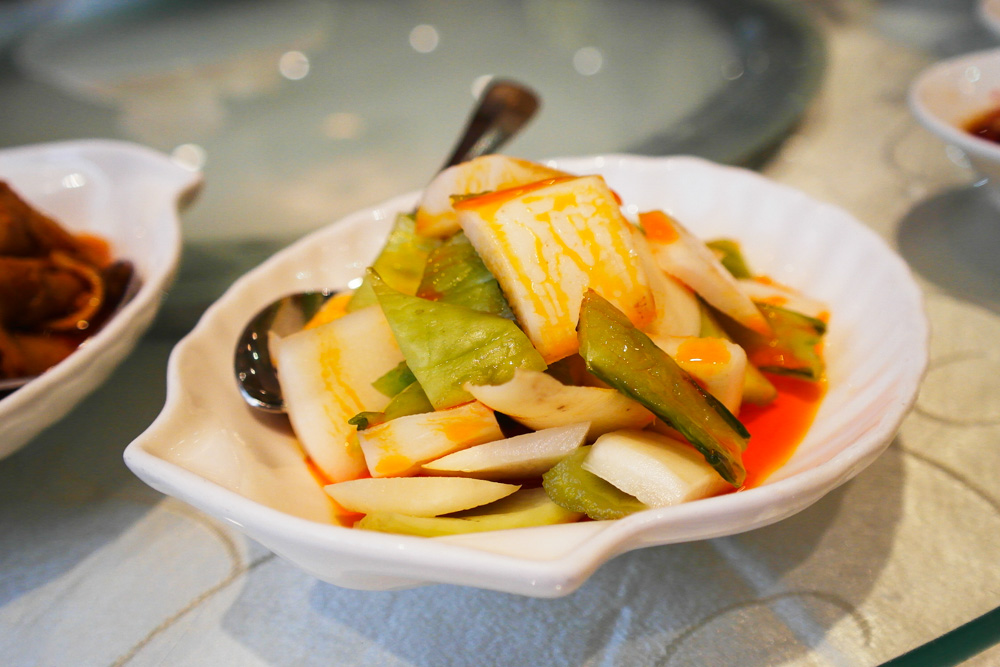 Chilled Sichuan Spicy Preserved Cabbage 四川泡菜 ($6). An assortment of vegetables is used more for color than for any specific taste, including mustard leaf and white radish. “Chong Qing” Chilled Chicken with Spicy Bean Paste 重庆口水鸡 ($15). Translated from the Chinese name, this dish literally means ‘salivating chicken’, which implies how delicious the dish is as you will salivate for more.

Indeed, the plain chicken breast adds on a certain flavour punch with the chili bean paste that slowly titillates the taste buds for more. Mix up the chili oil and don’t just try to skim off the top as the clear chili oil is actually the most spicy component. 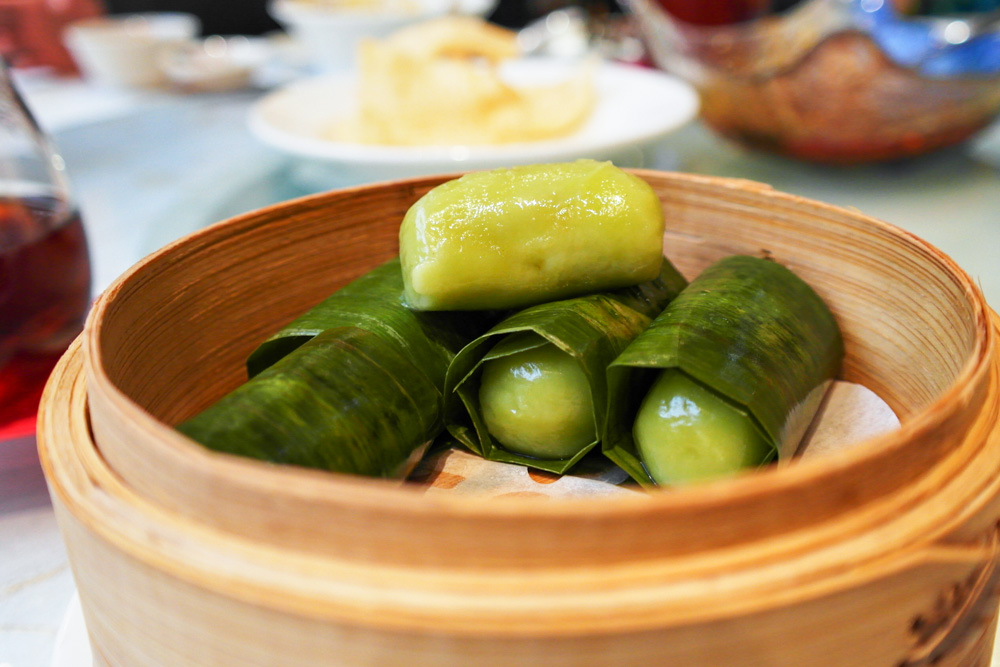 Minced Meat Glutinous Rice Dumpling Wrapped in Banana Leaf 叶儿粑  ($4.50 for 3). Most people think Si Chuan cuisine only has spicy dishes, which is not true- this dim sum item is a testament to that. The green dumplings are dyed by the spinach that is infused with the rice, and filled with pork floss inside for a sweet respite from the spiciness. 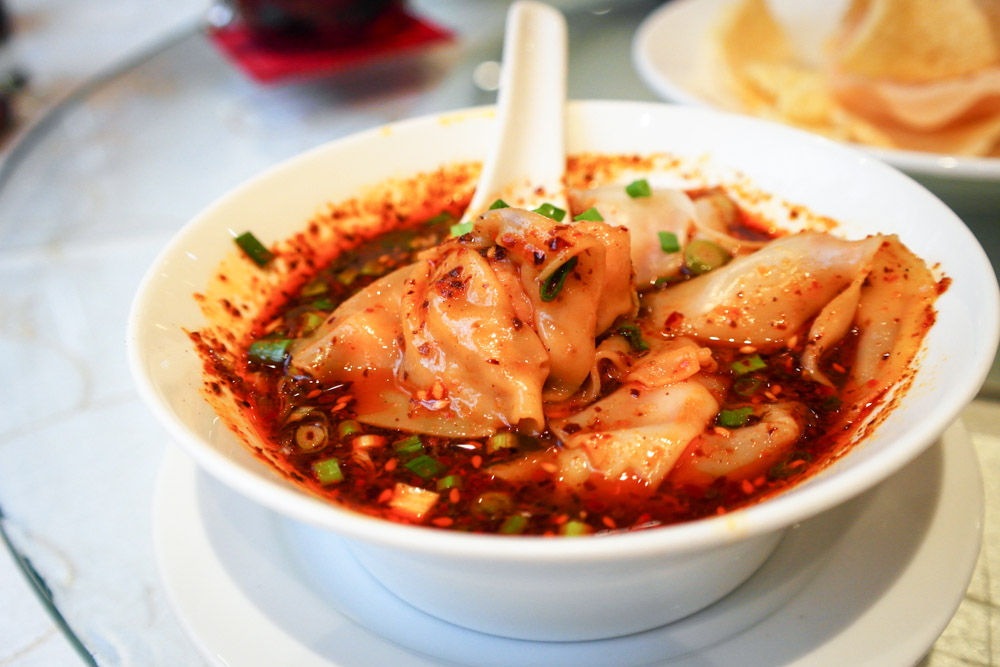 Minced Meat Dumpling in Sour and Spicy Stock 酸辣抄手 ($6 for 6). This smooth dumpling comes with a spicy sour broth that sets it apart from usual meat dumplings. 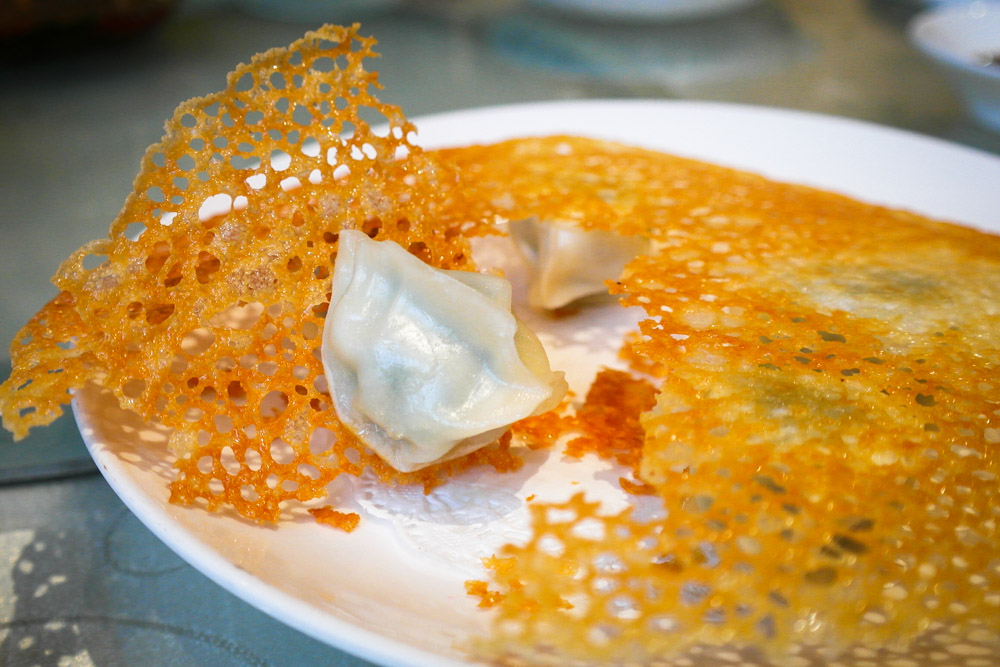 Pan-fried Minced Meat Dumpling with Chive 冰花锅贴 ($4.50 for 3). Another example of a non-spicy dish, the cracker not only absorbs the fried oils, but adds a crispy texture to the dumpling. 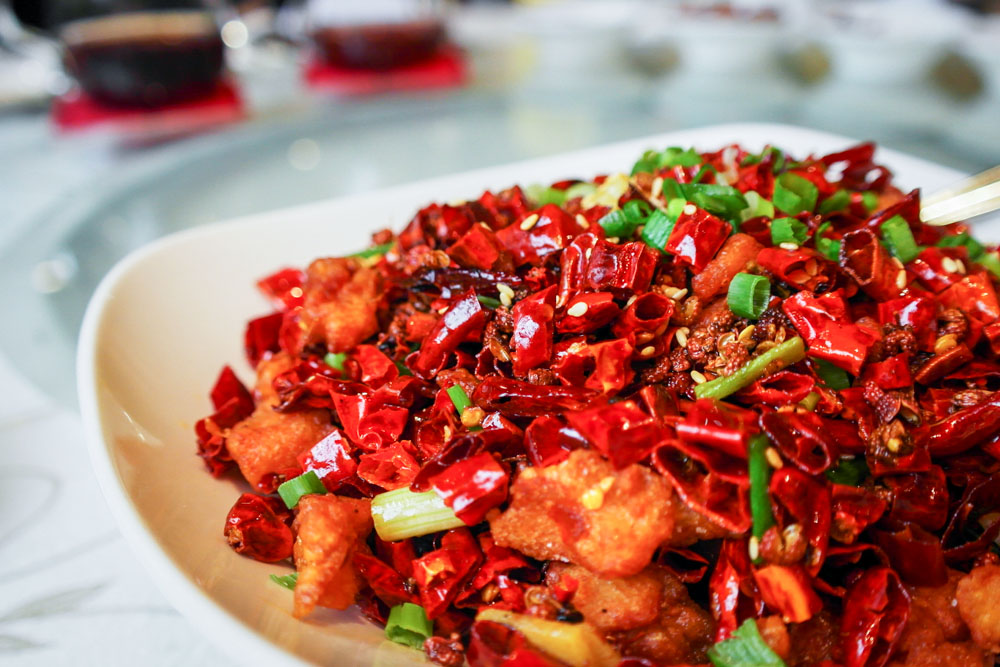 “Chong Qing” Diced Chicken with Dried Chili 重庆辣子鸡  ($20). One of the signature dishes of Si Chuan cuisine, you are not supposed to eat the chilis scattered all over, but rather, to fish for the crispy chicken pieces.

A good fried chili will have evenness all around without being burnt. Even after being put out for a while, the fried chili should still retain a soft crunch that can be observed by tossing it up a little to hear a distinct flaking sound when the chili falls. This is what the chefs in Si Chuan Dou Hua practice to perfection.

This was no doubt, the spiciest dish of the meal. Although my tongue more or less melted, the spiciness is rather addictive as it comes in small doses within the small chicken pieces. Don’t bite into a si chuan pepper though, or you’ll feel an electrifying numbness in your gums. The chili peppers is more to flavour the dish rather than for consumption. 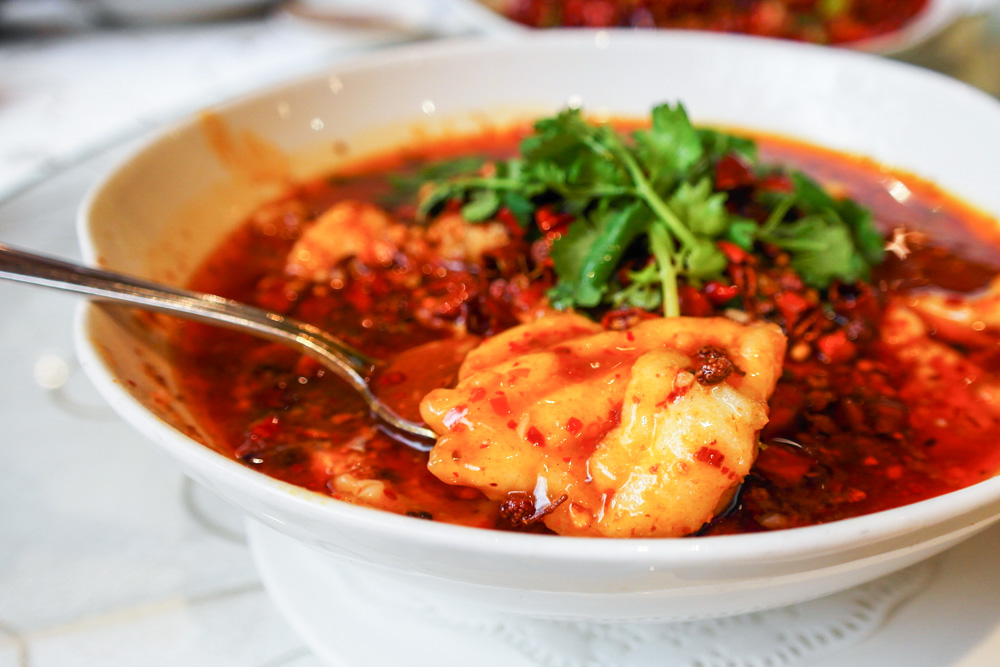 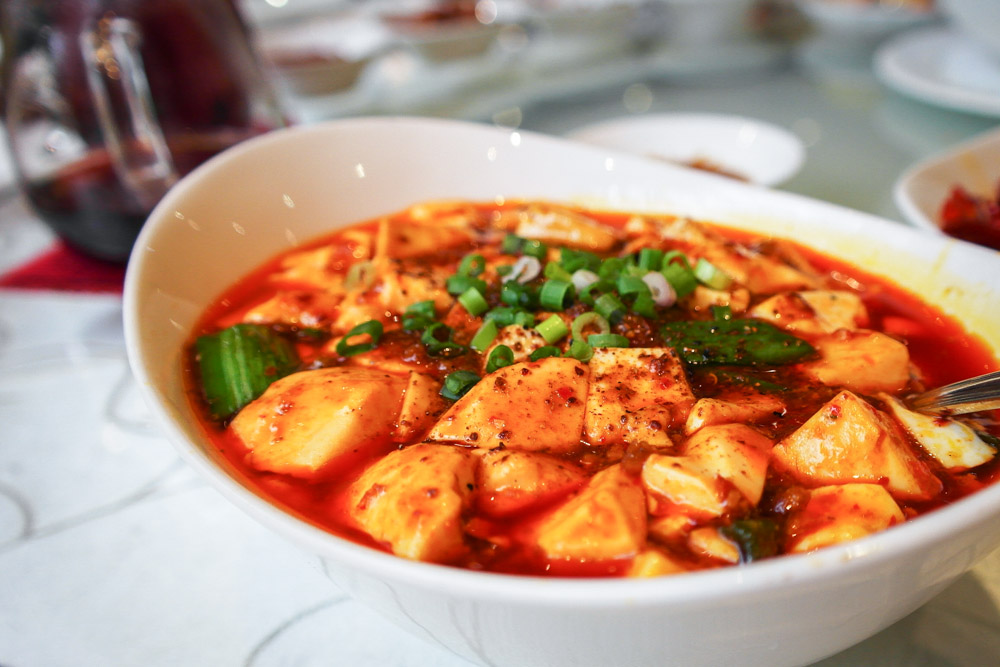 Bean Curd in Spicy Minced Meat Sauce 麻婆豆腐  ($16). My eternal nemesis: spicy tofu. After trying the Japanese version at Shisen Hanten, you can tell various differences between the 2 similar dishes.

For one, this version at Si Chuan Dou Hua has a heavier soy taste in the bean curd. The flavours are also a lot bolder and spicier, and definitely advised to be paired with rice for a more balanced flavour. The taste of subtle numbing spiciness is not one easily forgotten. 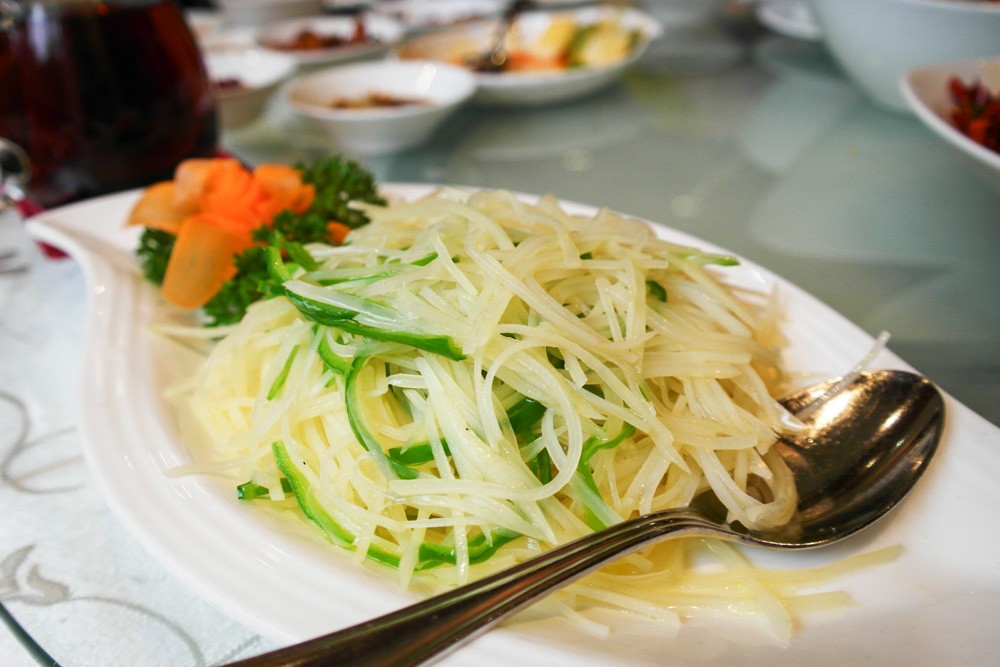 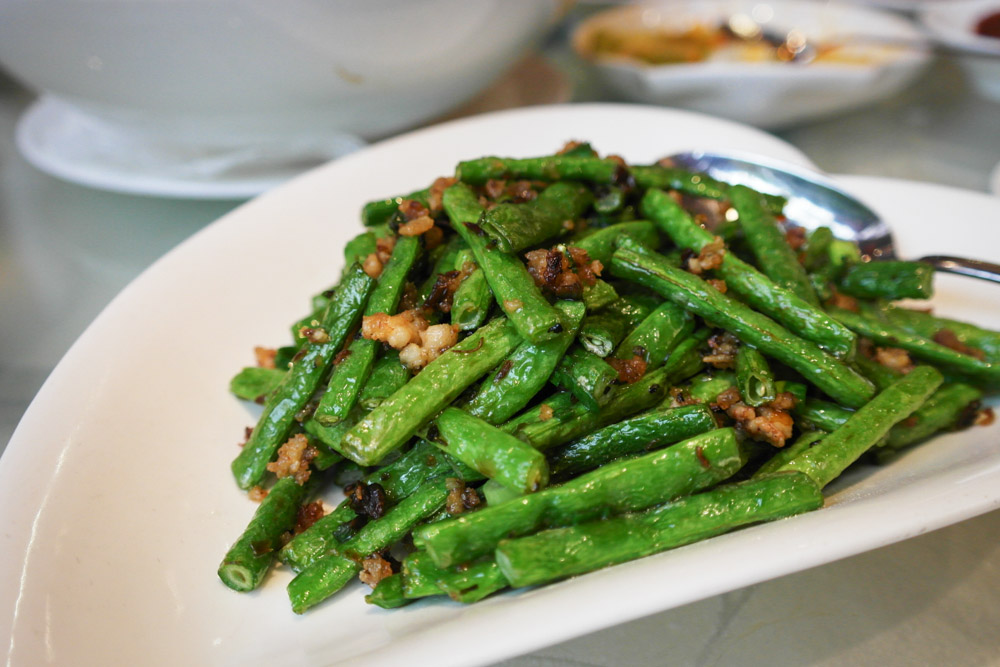 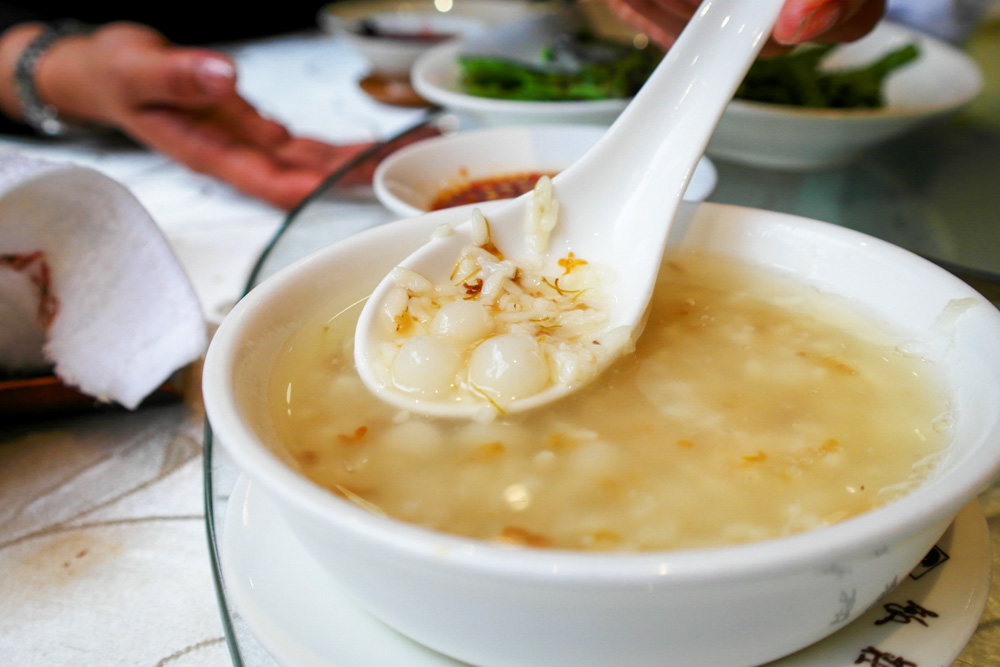 Glutinous Rice Ball in Chinese Rice Wine 桂花米酒粉子 ($5). Upon serving, the strong rice wine assaults your senses, and can be a bit much for non-alcoholics. The rice balls are more or less tasteless by itself, and you really need to appreciate the sweetness in rice wine to understand this dish. 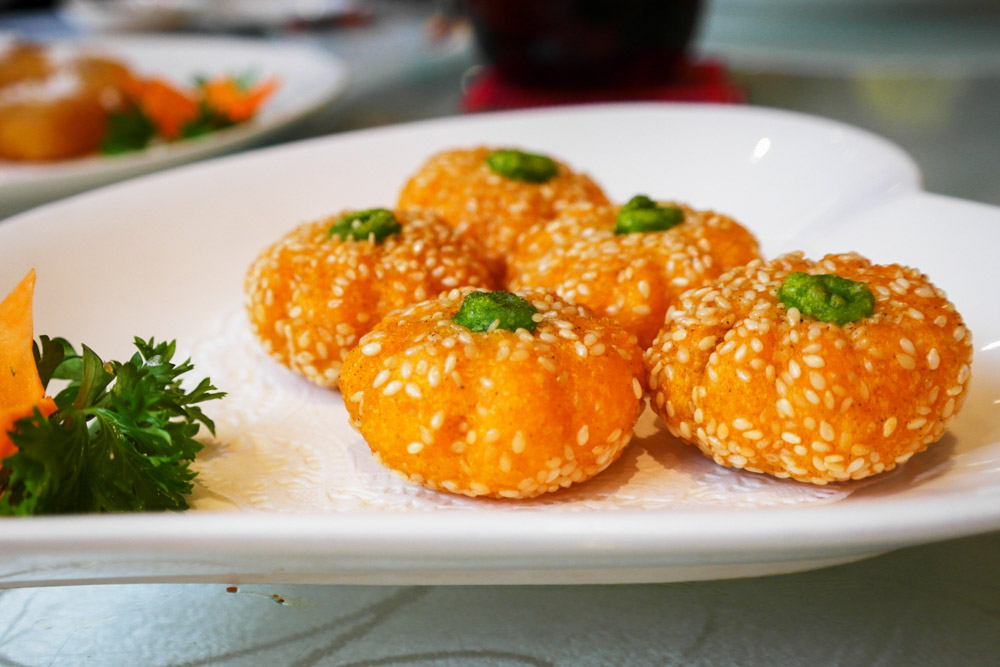 Pumpkin Pancake 南瓜饼  ($5 for 4). A sweet and savoury dessert filled with read bean paste, the exterior is crispy and contrasts well with the soft filling. Sichuan Glutinous Pancake 香酥甜糍粑 ($5 for 4). This was rather plain though despite being sweet. Tea pouring from long nosed bronze kettles. It’s actually water being poured from the kettle, into a cup of tea leaves. 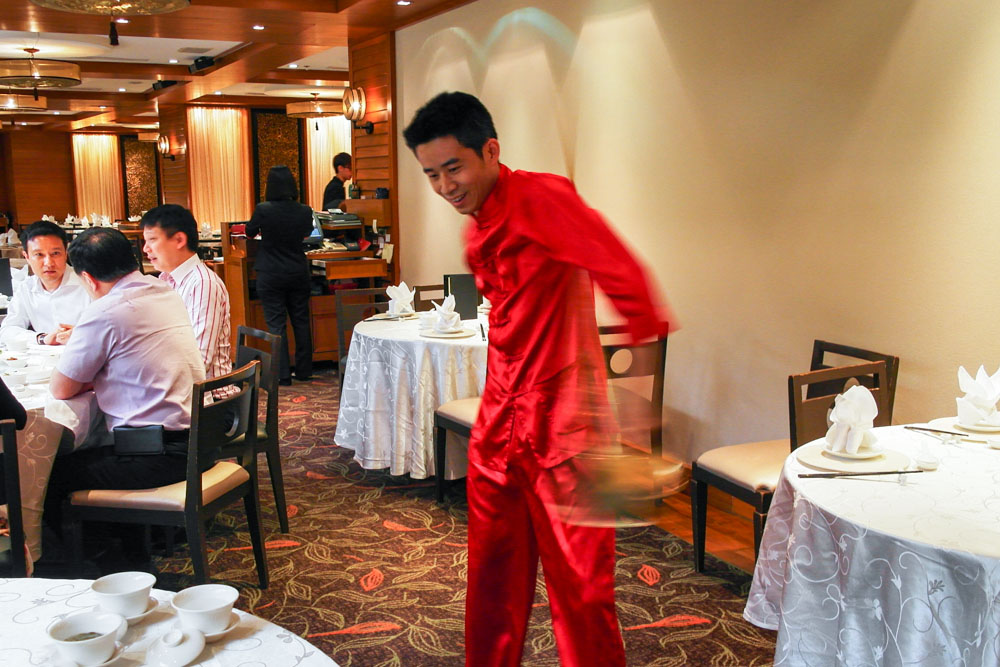 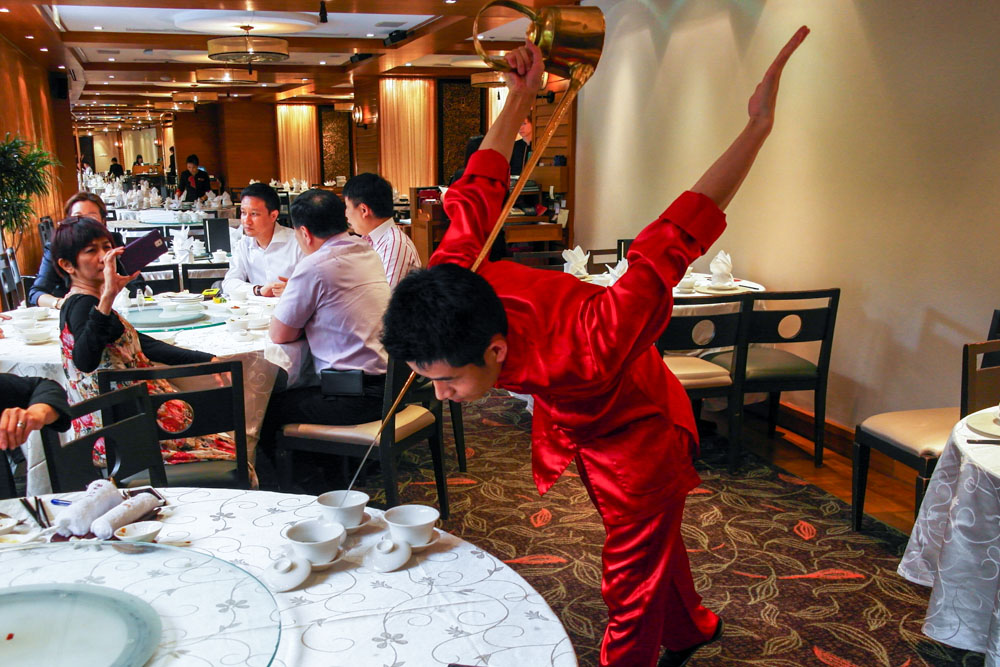 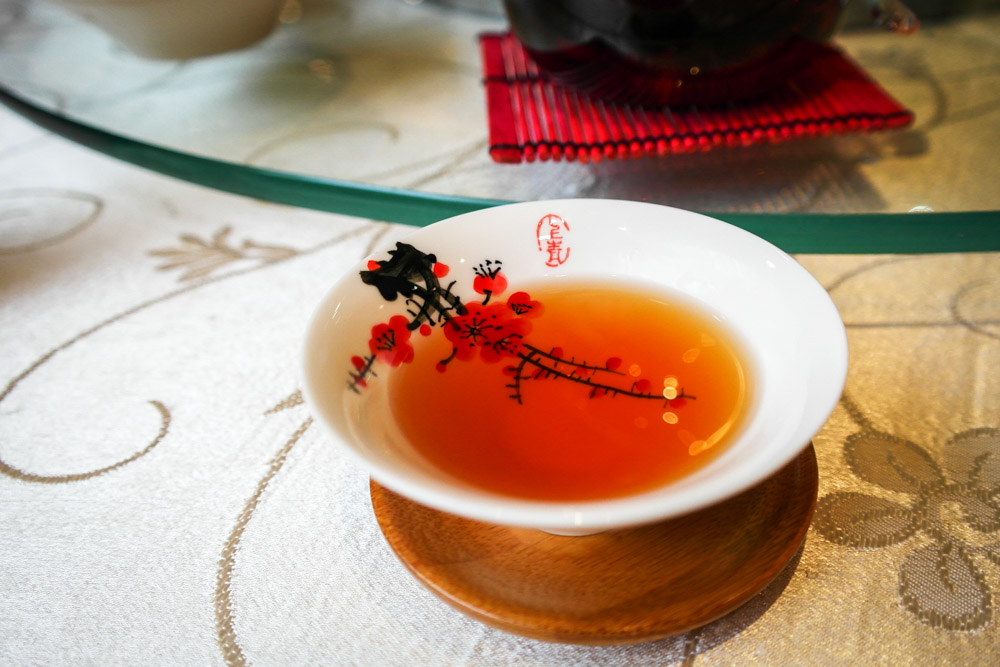 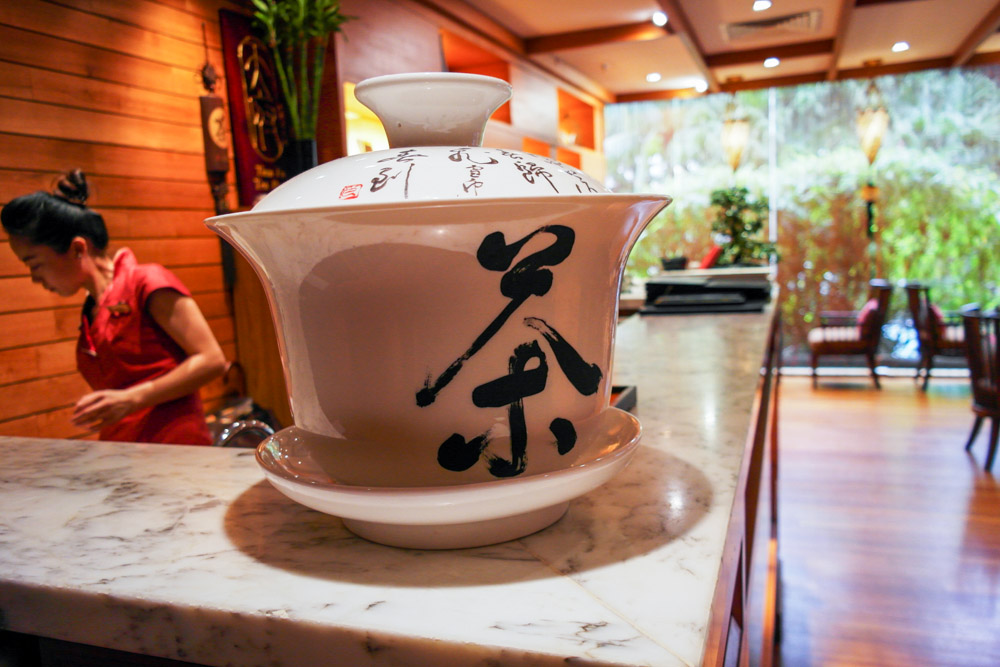 All the tofu used in Si Chuan Dou Hua is formulated with a special recipe and produced in house to give it’s acclaimed soy taste. Between the different Si Chuan Dou Hua restaurant outlets, each caters to a specific crowd with slightly different menu items.

An authentic Si Chuan experience, Si Chuan Dou Hua can be considered the pioneers of this cuisine in Singapore, serving a mix of Cantonese and Si Chuan delicacies fine-tuned to Singaporean taste buds. If you have a hankering for mala 麻辣 dishes, this is the first place you should go.