Despite growing up in Tampines, I’ve actually only dropped by Tampines Round Market & Food Centre a handful of times. 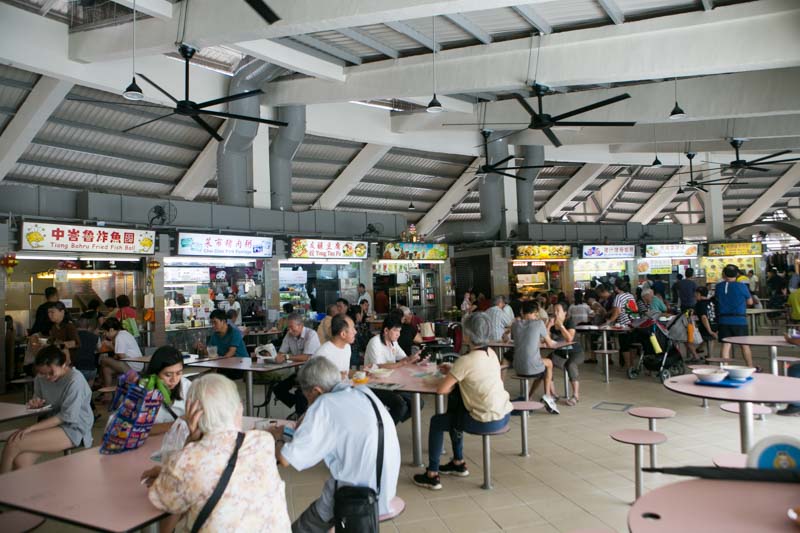 Sure, I’ve heard my parents rave about how good the food is, but it was only when I dropped by for lunch at Song Han Carrot Cake that I found out what a real gem this donut-shaped hawker centre is. The reason why it’s so popular? It uses curry powder in the carrot cake, which adds a tinge of heat to the dish. It’s the only carrot cake stall in Singapore to use curry powder, which makes it truly one-of-a-kind.

There’s only one uncle helming Song Han Carrot Cake, so it took me about 10 minutes to get my order. I watched as he cooked a large pan’s worth of carrot cake, split it into five to six servings, and added prawns or black sauce, depending on the individual customer’s order. For just S$2 a plate, I’d consider Song Han’s carrot cake to be one of the cheaper ones around. I got the Fried Black and White Carrot Cake (S$4) and the minute I collected my food, the strong smell of curry powder and turmeric wafted up from the plate, which reminded me instantly of rendang, Indian curry, roti prata, and so on.

I loved how Song Han listed Fried Black and White Carrot Cake as an actual dish on its menu. Most carrot cake stalls I’ve been to sell the black and white versions individually, and only put a mixture of both versions on the same plate if you request for it specially. The minute I ate Song Han’s white carrot cake, I was actually surprised at how light the flavours were.

Perhaps it’s because I’m more used to smoky and savoury carrot cakes, which rely strongly on soy sauce or pepper for flavour, but Song Han’s white carrot cake was sweet and fragrant, which was refreshing for a change.

The curry powder wasn’t too overwhelming (thankfully) and complemented the natural sweetness from the radish cake cubes. As I continued to chew on it, I could taste a hint of wok hei and white pepper.

The more I ate it, the more it grew on me. I ended up polishing off the entire plate of white carrot cake because of how addictively simple and delicious it was. The black carrot cake was definitely more flavourful thanks to the addition of dark soy sauce, which gave it a roasted and smoky touch. Song Han was really generous with the chye poh as well, which I spotted in every spoonful of carrot cake.

Apart from its trademark curry powder, what I loved about Song Han’s carrot cake was that it was handmade (which I could immediately tell from its inconsistent shape), as if the stall uncle had whipped out his knife on the spot and haphazardly chopped it up.

Texture-wise, the radish cubes were soft and delicate, like boiled yam, and I also liked that it wasn’t too oily. In fact, some might say that it’s on the drier side—there wasn’t any oily residue left on the plate at all. I also got another plate of Fried Carrot Cake with Prawn (S$4), and I was super delighted to find six to seven little pieces of springy prawns within my one plate alone.

They were sweet and firm—a sign that it was definitely fresh—and I liked that it added a different texture to the dish, so I wasn’t just eating soft carrot cake or crunchy chye poh.

For just S$4, Song Han was definitely generous with the chye poh, prawns, radish cake cubes, and eggs. If I ordered this elsewhere, I’d be charged at least S$5 or more.

Be prepared to wake up early for Song Han’s carrot cake because it closes as early as 10am on Mondays!

However, the carrot cake is worth the time and effort—you can’t find it anywhere else in Singapore, and the addition of piquant curry powder will definitely make you want to come back for seconds.