Triple three does themed buffets every now and then and from 9 – 26 April 2015, this quaint place in the heart of Orchard Just behind Cineleisure, less than a ten minute walk from the MRT goes to America! With simple hearty American classics like Mac&Cheese, Croque Madames, juicy steak/turkey/honey ham cuts. 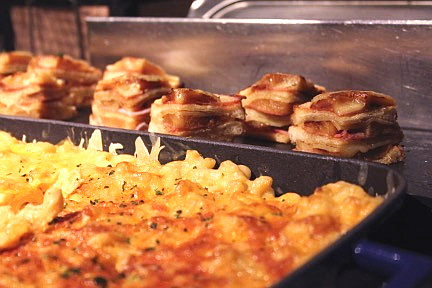 The Mac & cheese was executed in the traditional American fashion- light milky cheesy mash with macaroni. You can see it in the way the cheese sticks to the plate that a consistency like this takes a certain kind of skill to achieve.

My only hesitation would be that it was served cold. I loved the miniature version of the Croque Madame too! A little guilty pleasure of mine at Cafes, layers of honey ham stacked between buttered bread. Absolutely delicious. 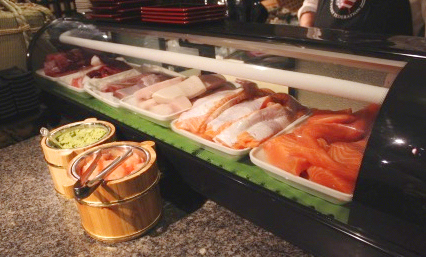 At Triple Three, they make an effort to go beyond the American classics to include a range of different foods too. For the appetizers, they have included different types o Japanese sushi and sashimi that includes swordfish, tuna, salmon and yellow tail. The salmon sashimi in particular was great.

Thick, meaty pieces without that dry bitter after-taste – a hallmark of insanely good quality. The exceptional quality to the seafood here is consistent across their crabs, their lobsters, their oysters and I almost dare say it is the freshest to seafood that I have ever had in my entire life. 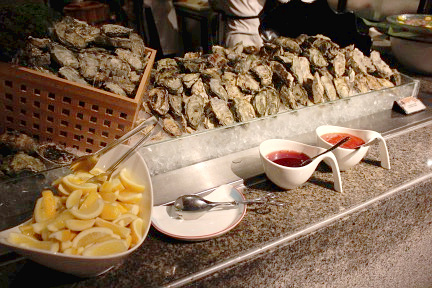 The freshly shucked oysters here are really popular too. As a disclaimer, the servers here have a practice of coating the shucked oysters with some lemon citrus water. If you prefer having your oysters shucked raw without any condiments whatsoever, as I do too, make sure to inform the server first.

As a rule of thumb, I have a habit of trying my food without condiments/dips because that way you cannot really access the freshness to it. If it is of a certain quality, it should be good enough to have on its own. Something I am more than happy to say about the seafood in Triple Three. 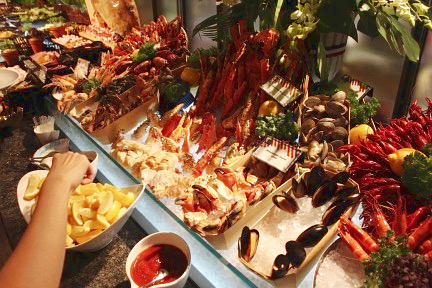 The fresh seafood section grows to include a variety of other things like crab legs, clams, prawns, mussels and even escargos too! I was trying to ration out stomach space between all the food so I did not have the opportunity to try the other fresh seafood. Which as a reasonable extrapolation, I am almost sure is very good too. 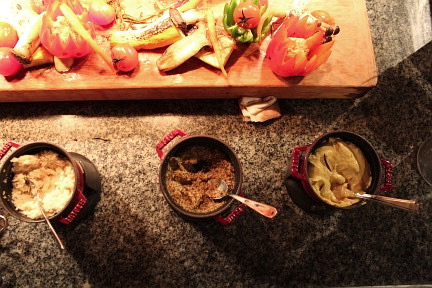 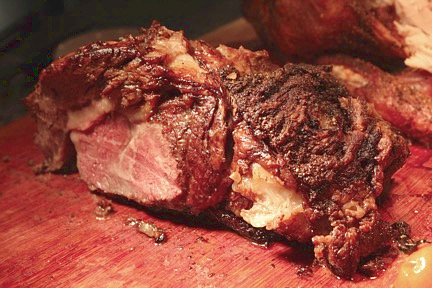 Easily the beef cuts were the star of the night. Perfectly medium rare, tender enough to chew as the flavor of the beef melts in your mouth with just a hint of blood. While the marbling was rather inconsistent, it was something really worth overlooking for really. The turkey was admittedly a bit dry while the lamb was pretty good too. It had a comfortable level of grease without having the whole thing turn out too heavy/oily. I am continually amazed how the chefs here at Triple three accommodate the many different themed buffets so seamlessly. The different meat cuts perfectly encapsulated what an American meal should be like.

The halibut was really good here too! I sadly don’t quite have a picture on it so I can only try to do it justice describing it. From what I think was red mullet, the ingenious use of a fish with a denser meat allowed the different herbs and juices to be captured better during the marination process.

The result was obviously wonderful. For the most part, you usually have fish that is well seasoned but not marinated. It’s a combination of quality ingredients and skill – here at Triple three, they have both. 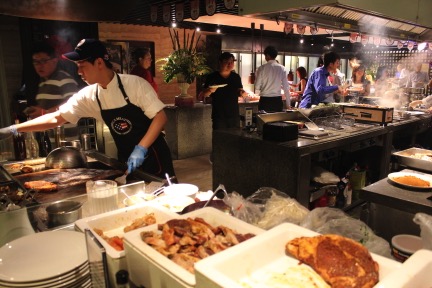 You can have the beef/salmon done up teppanyaki style with vegetables tossed up at the side. Maybe consider it a personal dislike for Japanese food, I didn’t quite like how the grease on the teppanyaki accumulated on the table so the resulting beef cuts turned out a tad bit too salty. It was great having the beef grilled, I just didn’t like the grease on it as much. The salmon though turned out just fine. A tad bit charred for a faint aftertaste of salmon skin. Just the way I like it. 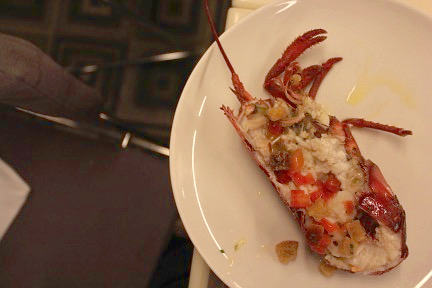 Ah yes, the Lobsters. They have it served differently at two separate stations. One way like this where its served with a dash of olive oil and croutons. The olive oil is only there to taste but the freshness of the lobster meat is undoubted for. I have a penchant for naturally strong flavors like these. Minimal seasoning. Maximum taste. I could have endless plates of these. My only hesitation is the long waiting time in between servings as they are all freshly made on the spot.

I would not recommend the lobster at the second station though; it is served with a chilli sauce and a mantou to the side. For some odd reason, the chilli sauce had enough kick. It was spicy but it failed to add any new dimension to the dish, in fact all it did was distract me from the goodness that is the fresh lobster though. I still finished this second helping because, yes – the lobster on its own is really that good. 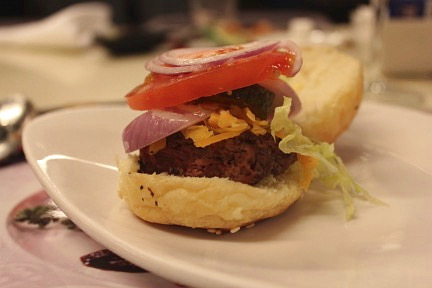 Nearer to the desserts section, there is a small little booth to the side. Surprisingly neglected by most of the dinner dinners that serves little hamburgers, tacos and Mexican wraps. I was happy to know they had a variety of dips to choose from that included Guacamole, Ground beef etc.

True to the American theme, I liked how these miniature burgers were slightly charred at the bottom bun for a smoky after taste that goes perfectly with the ground beef patty. I could have these all day but alas I was still on a mission to ration space for desserts. Customize the burgers with your own choice of toppings; capsicums, olives, cheddar cheese, lettuce, tomatoes. Do the same with your your taco/wrap too. You can choose to have it served with either chicken/pork/mutton or prawns. The safer,more conventional option would be to have it with a meat filling but I chose to have my wrap with prawns instead. Why? Because the seafood is so dang good here of course! with a Guacamole dip to the side. I was amazed at myself finding space to finish two servings of this nearing the end of the buffet. 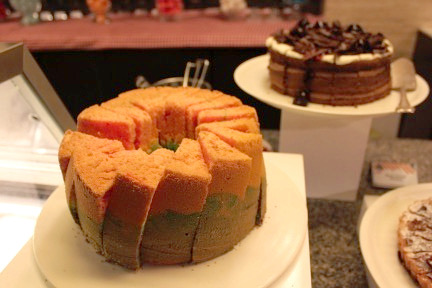 Triple Three has a decent dessert selection with plenty to choose from. I was intrigued to find a rainbow chiffon cake but apart from aesthetics, it really was just a regular chiffon cakes. They have key lime, pecan pie along with some bite sized cakes what I really liked here though was their different yoghurt themed desserts. 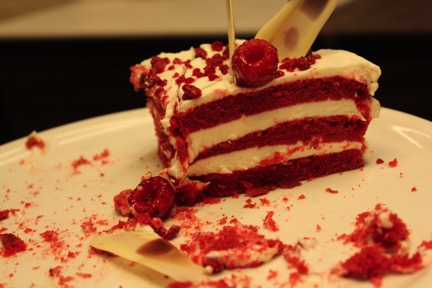 They have a interesting twist to the classic red velvet. Instead of the usual cream cheese, they opted to have yoghurt with their cakes as frosting. Surprisingly not as dense, the sour and softly sweet yoghurt was rather pleasant with the chunky chocolate cake. I quite liked this interesting combination. 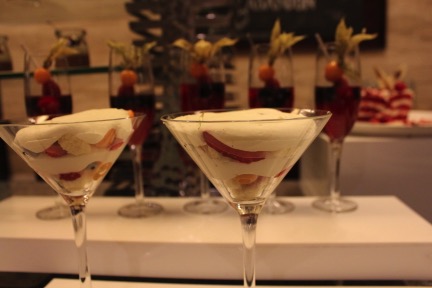 Another interesting thing I stumbled upon were these dessert cups, a mix of yoghurt with heavy cream mixed with fruits. I love how the fruits balanced out the milky taste to the yoghurt/cream mixture. It might not be the most pretty of desserts but is something refreshing from the usual cakes, pies whatnot.

When I go for a buffet, I don’t like to gorge myself silly trying to make my money’s worth. In fact, I find overstuffing yourself senseless ruins the whole dining experience altogether. I had a little bit of everything and thoroughly enjoy myself here.

The Great American buffet is only available during dinner and Sunday Lunch – priced at $108/pax. However, if you have a Citibank card, the second diner enjoys a 50% discount. Admittedly, this is definitely one of the more pricey buffets but for the selection and quality of food, it really is reasonably priced.

*The Great American Buffet is happening now till 26 April 2015.

Previous articleOn The Table: Singapore Cafe Review
Next article16 Healthiest Salad Bars in Singapore To Keep The Fats Away