What makes a good bowl of Sarawak kolo mee so different from a regular bowl of noodles?

Kolo mee is one of Sarawak’s most popular dishes, and though it might look like the simplest bowl of springy egg noodles, this no-fuss culinary icon comes with just the right amount of shallot oil, which makes every bite oh so fragrant. Not to mention that QQ minced meat and char siew, which provides that satisfying meaty bite.

You won’t need to travel across the causeway to find authentic kolo mee any more, because here are the 10 best kolo mee stalls in Singapore. When it comes to kolo mee, 林玉梅 Lin Yu Mei Sarawak Laksa & Kolo Mee is probably the most famous stall in Singapore.

Located in Haig Road Market & Food Centre, this popular hawker stall is run by Mdm Ling Hang Hua and her sister, both of whom come from Eastern Malaysia. Be prepared to queue if you’re visiting during lunchtime, as this stall boasts impressive queues!

The sisters have since expanded to several other locations— namely Anchorvale, Toh Guan, and Punggol— though its OG stall still remains at Haig Road. Affordably priced at S$4 per bowl, the Sarawak Kolo Mee is a must-try here. Curly, pale yellow noodles that bear a striking resemblance to our ever-dependable maggi mee are paired with minced pork, boiled char siew, and a blend of soy sauce, shallot oil and chilli. The result is a simple yet incredibly aromatic bowl of noodles that make this such a hearty delight.

Apart from that, Lin Yu Mei only sells one other dish— Sarawak Laksa (S$6), which is made with a combination of tamarind paste and coconut milk to create an earthy and herbal broth. Run by two Kuching-born hawkers, Meow Mee uses authentic recipes from Kuching (aka the capital of Sarawak), thus ensuring that its offerings are truly authentic to the core.

You can find Meow Mee in a Kim San Leng coffee shop along Geylang, and it’s a short 7-minute walk from Aljunied MRT. 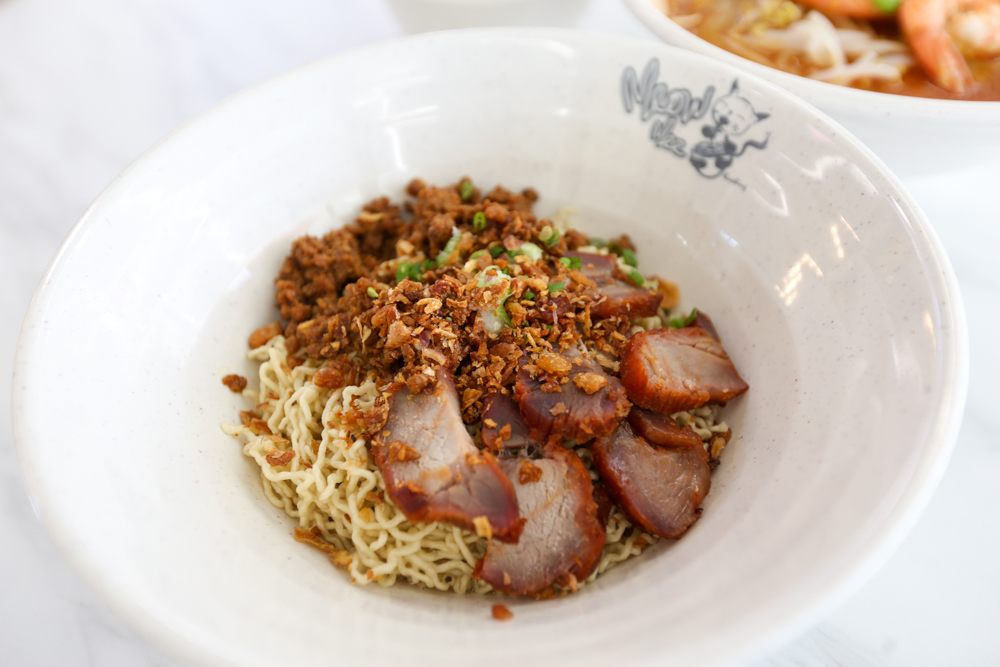 This was superbly tasty. The noodles were cooked just right and retained a QQ bounciness, and they had been coated in a blend of shallot oil, rendered lard, soy sauce and white vinegar, which gave it an incredibly aromatic touch.

It might look simple, but the flavours from Meow Mee’s KOLO Mee were absolutely spot-on. Highly recommended!

Also known as one of Bedok’s best-kept secrets is Sarawak Delicacy Laksa & Kolo Mee. It’s located along Bedok North Street 1, which is right behind Bedok Mall, and this stall is super well known for its never-ending line of customers, who queue from as early as 9am to grab a bowl of piping hot Sarawak laksa and delicious kolo mee.

Running the stall is Agnes, who hails from Sarawak, and her son. Though Agnes has lived in Singapore for close to 30 years now, she decided to open Sarawak Delicacy Laksa & Kolo Mee as she missed the familiar flavours from her hometown.

You really can’t go wrong with the Kolo Mee from this stall. Featuring springy, curly noodles that are coated in the right amount of lard and shallot oil, this simple bowl of noodles is topped with tender minced meat and char siew.

You can also try Agnes’ Red Sauce Noodles (S$5.50), which is essentially its Kolo Mee, but tossed in char siew drippings to create that vibrant red hue. Tampines Round Market & Food Centre is a popular haunt by many East siders. It’s been there for as long as I can remember, and my parents would often bring me there for breakfast when we used to live in the area.

One particular stall that you should try is Yummy Sarawak Kolo Mee, a popular kolo mee stall known for its long queues and often slow service. Yummy Sarawak Kolo Mee’s Signature Sarawak Kuching Kolo Mee Set Meal (from S$5) comes packed with more ingredients than I expected, and I spotted unique toppings such as fried wontons, dumplings, and pork ribs. To some extent, it even reminded me of wanton mee, but the bed of white curly kolo mee gave it away.

Despite the generous amount of ingredients, the kolo mee remained fragrant, springy and light. A fair warning that its chilli is spicier than it looks, so my best tip would be to refrain from mixing it in all at one go.

VivoCity-goers will recognise Jia Xiang Sarawak Kuching Kolo Mee. Yes, it’s that kolo mee restaurant in the basement of VivoCity, and this used to be one of my favourite haunts whenever I was in the area.

Apart from its VivoCity outlet, you might be pleased to know that Jia Xiang Sarawak Kuching Kolo Mee has two other outlets, all of which are centrally located— Alexandra Retail Centre and Marina Square.

There’s plenty of options here at Jia Xiang Sarawak Kuching Kolo Mee, but our advice would be to go for the classic Jia Xiang Mee (S$9.90), which comes with QQ noodles, minced meat, char siew, some vegetables, and a generous amount of savoury sauce and oily pork lard.

Once you’ve had a taste of the classic, you can try Jia Xiang Sarawak Kuching Kolo Mee’s other renditions, such as Fried Chicken Kolo Mee (S$9.50) and Black Pepper Smoked Duck Kolo Mee (S$9.50). Located in a coffee shop right behind Sarawak Delicacy Laksa & Kolo Mee is Ju Xiong Singapore, an 8-year-old stall that uses an original Sarawakian recipe to churn out tasty bowls of kolo mee. Ju Xiong offers three versions of Sarawak Kolo Mee (S$5)— white, red and black. Purists can go for the white version, which is the original kolo mee. The black version gets its name for the soy sauce it’s covered in, while the red kolo mee is covered in char siew sauce, which gives it its characteristic red colour.

You can also try Ju Xiong’s Sarawak Laksa (S$6), though note that most online reviews have mentioned this to be lacking in spices and more one-dimensional than other stalls.

Thanks to Traditional Sarawak Kolo Mee, you can now easily satisfy your kolo mee cravings at any of its five outlets across Singapore— Fusionopolis, Century Square, Northpoint City, Westgate, and Choa Chu Kang.

Those with a penchant for strong flavours can go for its Curry Chicken Kolo Mee (S$7.90) or Black Pepper Smoked Duck Kolo Mee (S$7.30) instead. For the best experience, complete your meal with Sarawak Coffee/Tea at an additional S$1.30.

Here’s a fair warning: most online reviews have pointed out the hit-or-miss standards from this brand, with some Google reviews raving at how tasty this dish is, while others have called it tasteless. Better pray that its standards are good the next time you’re dropping by!

This is for all you CBD folks. The next time you’re at Amoy Street Food Centre, be sure to head to the second floor to check out Sarawak Kolo Mee by Jin’s Noodle. Though it’s only open for 3.5 hours a day, this popular stall still manages to rack up an impressive fan base.

We recommend you for its titular dish, which features springy kolo mee tossed in a fragrant concoction of lard and chilli. Each bowl is also generously topped with a good amount of well-marinated minced meat and char siew to create that perfect comfort food for any occasion.

Its name, JJ, stands for 晶晶 (jing jing), which can be translated as “bright” or “shining”. Whether or not that’s an indication of their future or whether their noodles will be gleaming with shallot and lard oil, well… we’ll leave it up to you to decide.

The lady behind the hawker stall, Madam Wong, prides on using authentic Sarawakian ingredients and wherever possible, making everything from scratch. This even applies to Madam Wong’s Sarawak Noodle (Dry/Soup) (S$4/S$5), which features fried wontons, tender homemade char siew, minced meat, and springy kolo noodles that are tossed in an aromatic sauce comprising lard, oil and soy sauce. As a bonus for getting to the end of this article, here’s one kolo mee stall that you should definitely try— if not because of the food, then because of its creative offerings.

You might be interested to know that the recipe behind this ingenious creation took years of trial and error, and was inspired by Alan’s late mother. Alan’s Mala Prawn with Pork Ribs Kolo Noodle (S$8 for small, S$11 for large) might sound like a handful, but each mouthful was wonderfully delicious.

Though each element— mala, kolo mee and prawn mee— is too strong on its own, they pair up like adjacent pieces on a jigsaw puzzle when put together. The end result is an incredibly flavourful bowl of noodles, with the ideal amount of savoury spiciness from mala and sweetness from kolo mee.

Previous articleThe Glasshouse opens their 2nd outlet at Neil Road— the next Instagram-crazed cafe?
Next articleNew in town: The Pasta Project — Build-your-own pasta from as low as $5.90 with just a tap of your finger