11 best steamboat restaurants in Singapore worth queuing for

Steamboat, mainly a Chinese or Japanese tradition, is something we Singaporeans hold very dear to our hearts. It seems like we can’t get enough of it, from yearly reunion dinners to even a casual bonding session with friends at a nearby restaurant.

Steamboat used to only involve a pot of boiling water, with additional ingredients like fish, meat, seafood, fishballs and vegetables thrown in to slowly flavour the soup. Nowadays though, to increase the intensity of the experience, the base soup used is mostly stock or some pre-cooked flavoured soup.

Of course, with steamboat being such a prevalent staple in our Singaporean culture, many steamboat chain restaurants have started to pop up in recent years.

We have not included Chinese-style fish head steamboats, which could be another article all on its own.

Here is a list of 11 best steamboat restaurants in Singapore that you should definitely try with your family!

1. Beauty in the Pot Open till 3am, Beauty in The Pot is perfect for your late night casual gathering with friends or family alike. Featuring their signature Collagen Broth (yay to youthfulness), you can still stay bright and awake while having a steamboat feast at 1am. You’re certainly in for a treat here at Beauty in The Pot!

It is no secret that Singaporeans are in love with Japanese cuisine, not to mention Japanese hotpot (nabe).

Tsukada Nojo is famous for its Golden Chicken Collagen Stock, which comprises chicken bones that have been stewed for over eight hours. Based on a traditional Japanese secret recipe, this special broth is then allowed to cool, forming a jelly-like pudding that disintegrates magically into a creamy, thick broth when heated. It is super rich in both flavour and collagen, and not to mention healthy too. No wonder there always seems to be a queue!

Pick from a Single Flavour Pot (from S$19) or Double Flavour Pot (S$30) and select from a wide variety of soup flavours such as Original, Sukiyaki, Pumpkin, and even White Miso Soy Milk. As for ingredients, be sure to try Tsukada Nojo’s Kagoshima Fish Cake Original (S$5)! The newest hotpot contender in town is Wu Wang Guo, a quaint yet excellent hotpot restaurant located on the third floor of Chinatown Point. It opens till 3am daily and offers a 25% discount off all food items after 9.30pm (applicable even on weekends and public holidays), making this restaurant a real force to be reckoned with. Wu Wang Guo has a wide range of soups which include traditional hotpot favourites like WWG Collagen Beauty Soup (S$11), as well as newer flavours that were inspired by the local palate, such as Golden Fish Maw with Pig Stomach Soup (S$7) and Nourishing Drunken Chicken Soup (S$8).

My personal favourite was the Golden Fish Maw with Pig Stomach Soup for its piquant pepperiness, which warmed my whole body. Wu Wang Guo also offers unique hotpot ingredients that I’ve never come across before. Its specialty homemade pastes, such as the Dragonfruit Prawn Paste (S$12), stunned me with its vibrant colour. After being cooked, I couldn’t taste any hint of dragonfruit in the springy balls of prawn meat, though I noticed it was juicier and slightly sweeter than normal. You can try the Black Ebiko Prawn Paste (S$13), which popped in my mouth in a delightful way and went perfectly with the tender prawn meat. For the ultimate show-stopping experience, try Wu Wang Guo’s Sake Drunken Prawn (S$13 for half portion, S$26 for full portion). Live prawns were covered with sake and served to us in a closed container. It was a real sight, with wriggling, fresh prawns that were jumping in the container!

Trust me when I tell you to let the staff handle this dish, as they’ll take over the entire cooking process and even peel the prawns for you. We didn’t need to get our hands dirty at all. A+ for effort.

Note that if you’re dining past 10pm, do exit via Chinatown Point’s entrance with the taxi stand as the other one will be closed. For those driving, you can use the mall’s entrance at the Level 3 carpark.

Get ready to be treated like a king (or queen) here at Hai Di Lao 海底捞, the undisputed most popular hotpot joint in this article. Though the waiting times are long, ranging from an average of one to two hours even for folks who’ve made priority reservations, it’s certainly worth it. Not only do they have various soup bases available, such as the all-time favourite Tomato Soup Base and Bai-Yu Soup Base, Hai Di Lao’s ability to let you order in half portions means you can order a wider variety of your favourite dishes, such as U.S. Wagyu Beef (from S$28), and Iberico Pork (from S$12).

The services here are worth a mention. Free gel manicure sessions (which are back as of August 2022), charging ports, and miscellaneous free-of-charge services such as being able to change your phone screen protector, providing shawls if you’re cold, and so much more.

With one of the best laksa soup bases you can find here in Singapore, San Laksa Steamboat definitely managed to snag the hearts of many. It is a little puzzling how there are so many good laksa joints here in Singapore, but those serving that creamy, thick and authentic laksa steamboat are few and far between.

Do note that after 14 years at Telok Blangah, San Laksa Steamboat has moved to Kitchener Road. Price wise, it’s pretty affordable. The Signature Laksa (S$10) soup base is free-flow, while the Two Soup Combo costs S$12. Meat dishes start from S$5, while vegetables go from as low as S$2.50 each.

San Laksa Steamboat will surely satisfy your tastebuds. I thought I might get a little sick of the rich, coconut-based broth, but it actually got even more enticing as ingredients were added in. We ended up polishing off almost the whole pot of soup. Talk about a bowl of sinful goodness!

Chope: Save 20% at San Laksa Steamboat

A different take on the local hotpot scene, Shabu Sai offers a shabu shabu selection instead, with many different soup bases to choose from.

Their broths may not be as thick or authentic in flavour as the rest here, but they definitely have more variety. The broths include favourites like the Sukiyaki, Tonkotsu and Yuzu Collagen.

Shabu Sai serves a 70-minute shabu shabu buffet, with prices starting from S$16.99++ per pax for the weekday lunch buffet, so it’s an extremely value-for-money option where you can continuously order as much Pork Collar, Pork Belly and Chicken as you want. Do note that if you’d like to have free-flow beef, you’ll have to top up S$2. 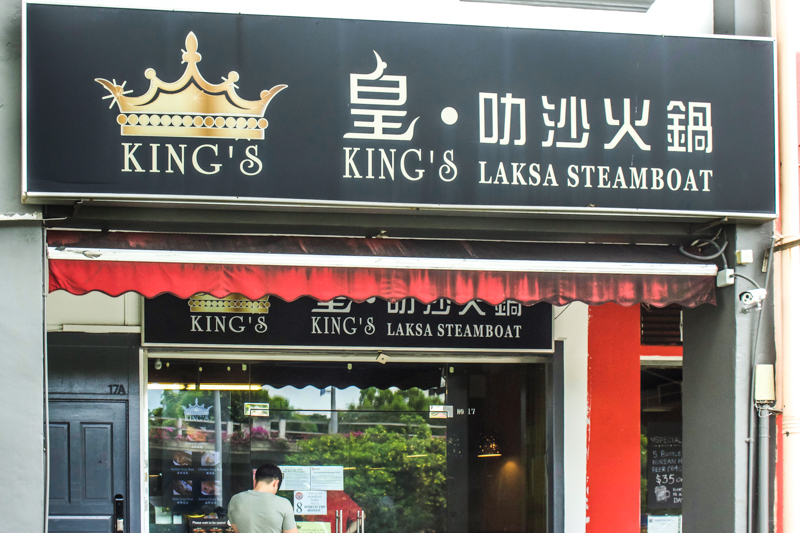 Located along Teck Chye Terrace, King’s Laksa Steamboat offers a 120-minute all-you-can-eat steamboat buffet that comes with an affordable price tag. It also offers various soup bases such as Laksa and Mala that can be paired with over 80 different steamboat ingredients.

Note that its buffet prices vary depending if you’re here for lunch or dinner on a weekday or weekend, but generally the prices start from S$24.80++ per pax, with separate prices for the soup bases. 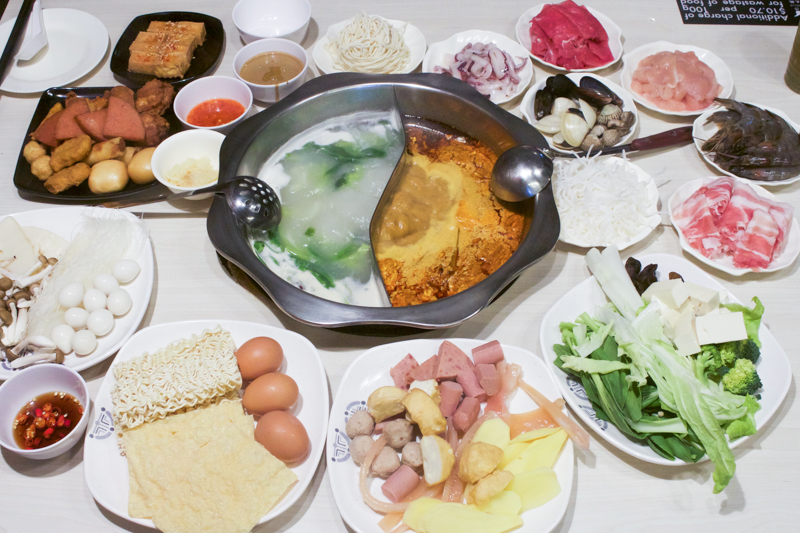 You’d be pleased to know that the buffet doesn’t just provide raw ingredients; they serve fried side dishes, as well. In fact, they have a wide array of appetisers ranging from Spring Rolls, fluffy Golden Mantous, Chicken Nuggets, Luncheon Meat and delicious Prawn Paste Chicken.

These really helped to keep our tummies from grumbling while we were waiting for the steamboat ingredients to cook. What’s more, each of these dishes is fried a la minute so, you know that they’re guaranteed to be fresh! I bet you that you’ve never heard of pao fan hotpot. PaoFan Paradise is run by the folks from T.K Kitchen Restaurant, and they’re the first to invent their signature Hotpot Pao Fan. While their pao fan hotpot flavours include Ginseng Chicken Pao Fan and X.O. Fish Pao Fan, we recommend you try their Lala Pao Fan (U.P. S$78, promotional price S$58). You’ll get a plate of fresh lala along with a colourful mix of fresh prawns, clams, and crayfish, their signature garlic fried rice, fresh vegetables, and other hotpot staples.

To best enjoy this unique hotpot, there are a couple of “steps”. First, try the broth with the lala. After that, pour the soup into your bowl of garlic fried rice. Lastly, add the vegetables and other hotpot staples into the soup.

Founded in Hong Kong by Mr Fong Chi Chung (who first made a name for himself with Michelin-starred restaurant Putien), Uncle Fong Hotpot Restaurant has been nothing short of a booming success, drawing massive crowds that include both locals and celebrities alike.

This restaurant offers an authentic Chongqing hotpot experience, and is most well known for its nine-grid layout pot, which segregates the entire hotpot into three different heat zones. The heat is the strongest in the middle square, while the four grids around the centre square have a more even, medium heat. Lastly, the corner grids have the least amount of heat.

Pair the fiery yet piquant soup with specialty items like Beef Tripe (from S$12.50), Pig Throat (from S$9.50) and Fresh Ox Liver (from S$8.50) for the full Chongqing hotpot experience.

Qi Xiang Hotpot will delight Westies, because it’s located at The Chevrons in Jurong East and opens till 3am! While most hotpot places offer mala, chicken and tom yum soup bases, Qi Xiang Hotpot’s Signature Broth Soup is certainly worth a mention. Sweet yet spicy, it had a strong hint of soy that reminded us of kicap ayam (an Indonesian/Malay chicken dish simmered in sweet soy sauce) that made us go back for more. More interestingly, Qi Xiang Hotpot offers an all-day breakfast menu, so that you can snack on familiar favourites such as Rosti Plate (S$11.90) and Chicken Cutlet on Waffle (S$9.90) while sipping on your hotpot soup. Those working around the Tai Seng area will be familiar with the Sakae Holdings Building on 28 Tai Seng Street, but nestled on the first floor within the Wonderfull kopitiam is Buffet Paradise Steamboat & BBQ Buffet, which offers an all-you-can-eat buffet! With a massive buffet spread ranging from Green-lipped Mussels to Fish-shaped Surimi and six types of marinated pork and chicken, you’ll really be spoilt for choice. Be sure to pair your food with free-flow condiments and sauces, and end your meal with unlimited scoops of ice cream for that sweet, sweet note.

Do note that you can have one or both of two varieties of soup: Herbal Chicken and Tom Yum, the latter of which is spicier than you think!