I fondly remember my time in London when I had a Full English Breakfast every single day. The eggs, sausages, bacon and beans, not forgetting black pudding, always make for a hearty meal.

I’ve never been able to get over how unforgettably delicious British food is. Since then, I’ve been looking for places in Singapore which serve up sumptuous British fare.

Without further ado, here are 10 British food spots in Singapore where you can dine like the Queen of England. Located in the Joo Chiat area, British Hainan is a family-run restaurant.

The restaurant prides itself on serving a range of British-inspired dishes, with recipes which belonged to the family’s Hainanese elder. Their signature Hainanese Oxtail Stew (S$29.90) is a hot favourite amongst diners. They slow-cook the oxtail for about four hours, making it extremely fork-tender and juicy.

They also serve it with a side of baguettes for you to mop up the rich and decadent gravy. There’re no GST or service charge here, so you’re definitely getting your money’s worth! Given how posh the Britons are, the last place you’d probably expect to find British food is a hawker centre. However, Lad & Dad is a stall in Maxwell Food Centre which specialises in British comfort food.

Founded by a father-and-son duo, the stall serves up a range of iconic British fares. The English Fry Up Platter (S$12) is the closest dish they have to a Full English Breakfast, which I absolutely love. The greasy goodness of the bacon, sunny-side-ups and English sausage never fails to hit the spot and leave me satisfied. Lad & Dad also serves up a lip-smackingly good Fish & Chips (S$10). Their mushy peas were surprisingly tasty and the fact that they serve it with straight-cut chips instantly won me over. Located in the tourist-teeming VivoCity, The Queen & Mangosteen is the perfect place to take refuge after a shopping trip. They fill the pie with prawns, scallops, as well as the fish of the day, in a creamy sauce. A layer of fluffy and buttery mashed potatoes completes the dish. Their Haddock & Chips (S$20/S$22) comes with a large helping of chips, tartar sauce and a small bowl of mushy peas. Dense and meaty, the haddock was ultra flaky. It had a beautiful golden-brown batter which gave a delightful crunch too.

Their traditional thick cut chips are made from whole potatoes from Cambridge and freshly-cut just before every lunch and dinner service. As such, they’re incredibly crispy on the outside, yet fluffy on the inside. It’s almost like a cross between a French fry and a potato wedge!

Located right next door to the aforementioned Smiths is The Red Lion. The two establishments are actually partners, serving up scrumptious British pub food in the Novena neighbourhood. 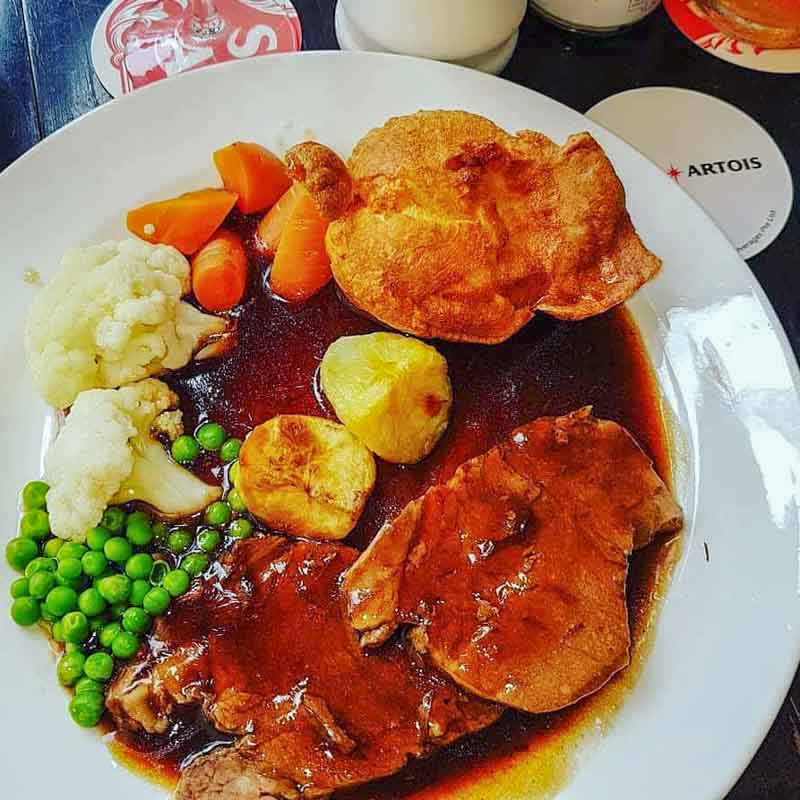 On Sundays, The Red Lion offers a traditional English Roast (S$22++) lunch. With a choice of roast lamb, roast beef or roast chicken, it’s perfect for a hearty Sunday meal.

Or if you can’t wait till lunch, The Red Lion has a Great British Breakfast menu too. The Lions Hearty English Breakfast (S$22++) will definitely fill you up even if you’re a big eater. When it comes to great British food, Gordon Ramsay often comes to mind.

His only Singapore outpost, Bread Street Kitchen, lets you have a British experience at affordable prices. The Pan Fried Seabass is a must-try if you’re a fish lover. The meat was succulent and made an exceptional contrast with the crisp skin. Located along Haji Lane, The Mad Sailors serves up much more than Bangers & Mash and Fish & Chips.

Expect to have great British food in a homely setting, perfect for winding down after a long day at work. Their Good Ol’ English Fry Up (S$22) is a modern version of the classic English Breakfast. From sausage to baked beans to egg, this dish has it all!

The star of the show would definitely have to be the huge beef sausage. Spanning across more than half of the plate, it was delightfully juicy, pairing well with the garlicky roasted mushrooms. Located along Mohamed Sultan Road near Fort Canning is The English House.

Under the helm of legendary British chef Marco Pierre White, they serve up English comfort food with a modern twist. 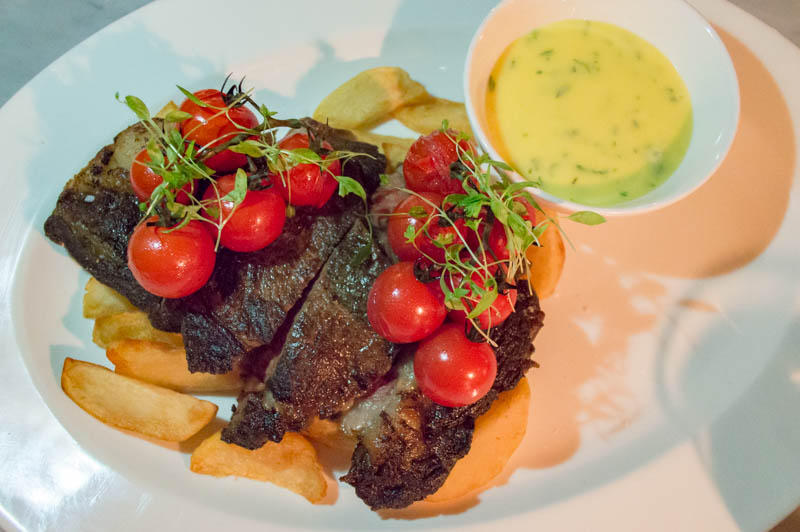 The creamy and tangy Béarnaise sauce went really well with the meat. Its rich flavour managed to cut across the greasiness of the beef. Nested within the Hexacube Building, Pig N Whistle is a neighbourhood gastropub that serves up authentic British pub fare.

A hidden gem in the Eunos neighbourhood, it has become a second home for the residents in the area. Pig N Whistle is the only place in Singapore where you can get authentic Steak & Ale Pie (S$12.90+) that’s made in-house. The puff pastry was golden, flaky and buttery, giving off a delightful crunch.

The chunks of beef were sinewy yet tender, falling apart with the gentlest tug. It comes with a rich gravy that makes for an irresistible oozy mouthful. Perched on the pinnacle of Ann Siang Hill, Oxwell & Co. represents a piece of the British comfort in a heritage shophouse. The classic Fish and Chips (S$26) is also exceptional. With fresh seabass, chips and tartar sauce, this dish is a crowd favourite. They infuse beer into the fish batter too, making it incredibly scrumptious.

So Bob’s your uncle! With these grub spots, authentic British food isn’t that far from us anymore.

Which country do you think has the greatest eats? We’d love to know your favourite international cuisines and where we can find them here in Singapore.