“Immense range of Spanish tapas to choose from” 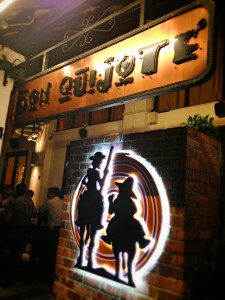 On my latest Spanish food warpath, I was fortunate enough to get a massive dinner party invite to Don Quijote, a simple little feature at Dempsey Rd. In case you fumbled with the name like I did, it’s pronounced “Don-key-ho-teh”.

Don Quijote restaurant is named after the famous Spanish novel Don Quixote (pronounced the same way) featuring an adventurer so inspired by chivalry, he sets out on various quests to revive this dying trait, one of which features him charging windmills he believes to be ferocious giants. Yea its trippy stuff. Even the logo is of the hero with his sidekick if you noticed.

The interior of Don Quijote is spacious and simple, using a lot of yellow paint, brickwork wallpaper and dark wooden furniture, giving a earthier and grounded feeling. This creates a very homely style of dining which is what the restaurant wants to convey. 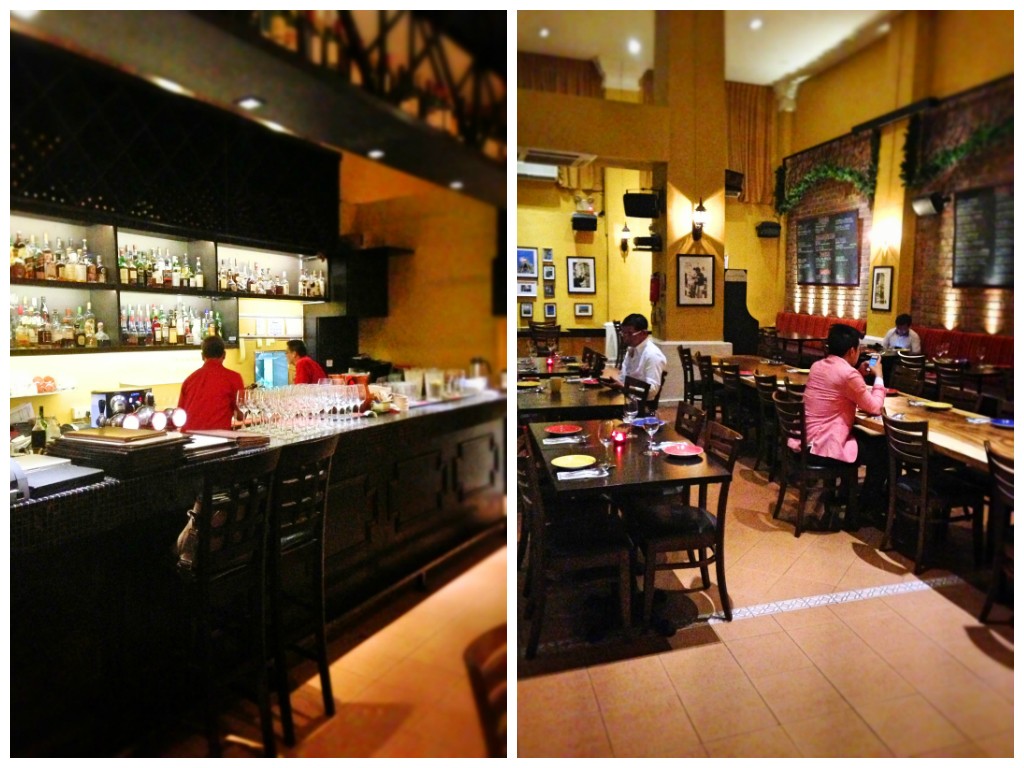 Spanish communal dining is really all about sharing and eating heartily with friends and family over a large variety of tapas dishes.

Don Quijote restaurant has more than a hundred items on its menu, and trying every single dish will probably take you 10 visits minimum. For my tasting, I probably tried 20% of the menu which was already about 30 different dishes. As such, what I’ll do is split the review into 3 parts for easier reading, categorization of the menu items and so I don’t go insane with typing.

The interesting thing you can do at Don Quijote is to really customize authentic Spanish menus in different styles. Choose to eat like a true Spanish family! Or a T-rex. The choice is yours. In this 3 part restaurant feature, I’ll be featuring one possible dining menu per article.

I’ll be introducing the first Spanish dining menu today, which is a traditional Spanish Tapas and Paellas dinner that is good for a party of 6. Calamares Fritos. Fried Battered Squid served with House Sauce ($12). The fried squid was a tad chewy from being overcooked, but the fry batter was excellent. Chipirón. Baby squid 3 ways of cooking: Fried Battered, Cooked with garlic and olive oil or in its own ink ($15). Tender baby squid that is delicious in any of the cooking options you choose. Tacos de Lomo al Queso Azul. Tenderloin Steak Cubes with Blue Cheese ($20). This tapas is definitely worth a highlight as the best tapas of the night. Superbly tender and juicy pan-fried in some simple caramelized onions. By itself the meat was already perfect, but you could dip it in the subtle blue cheese sauce provided to add a bit more dimension. 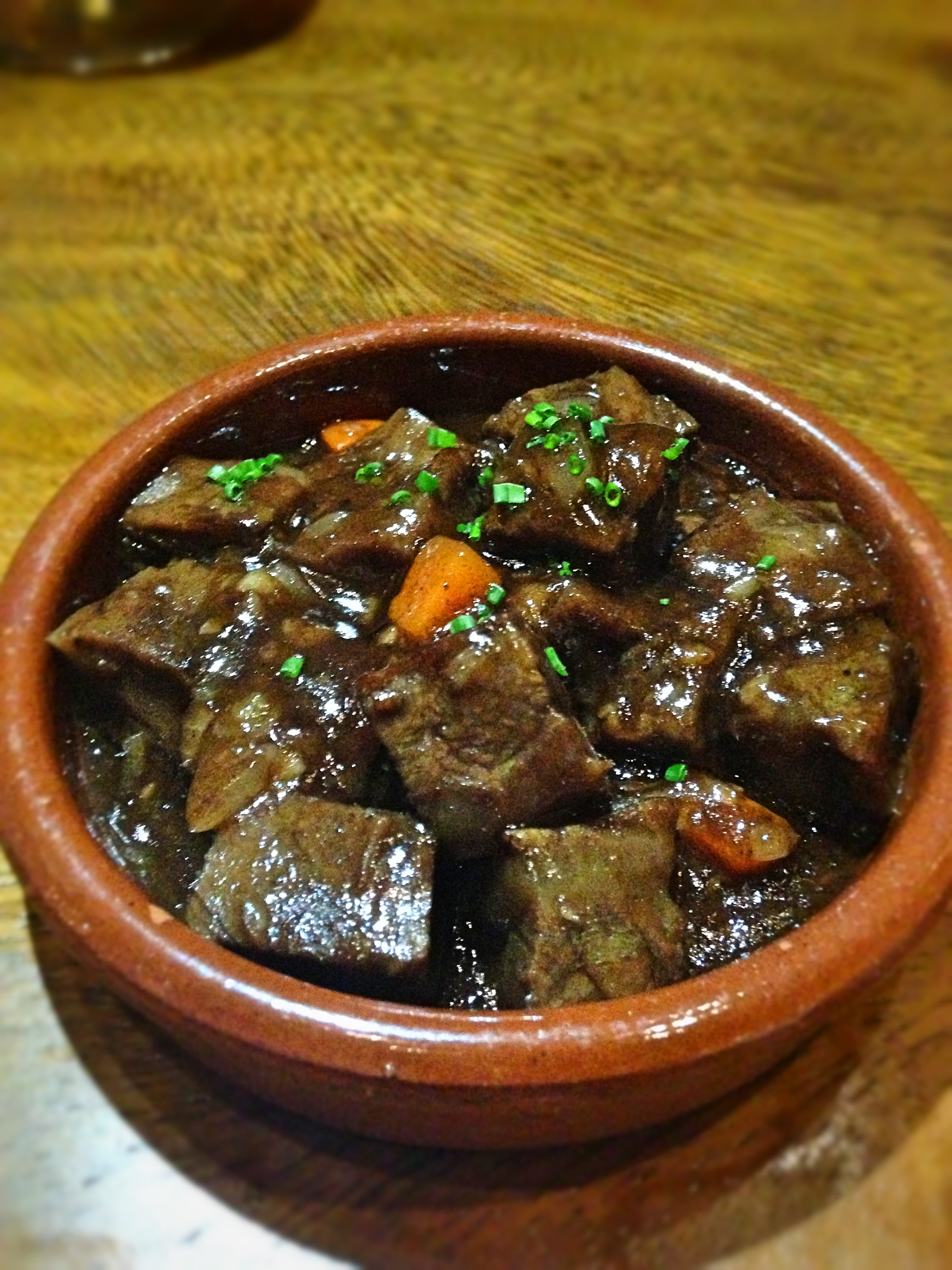 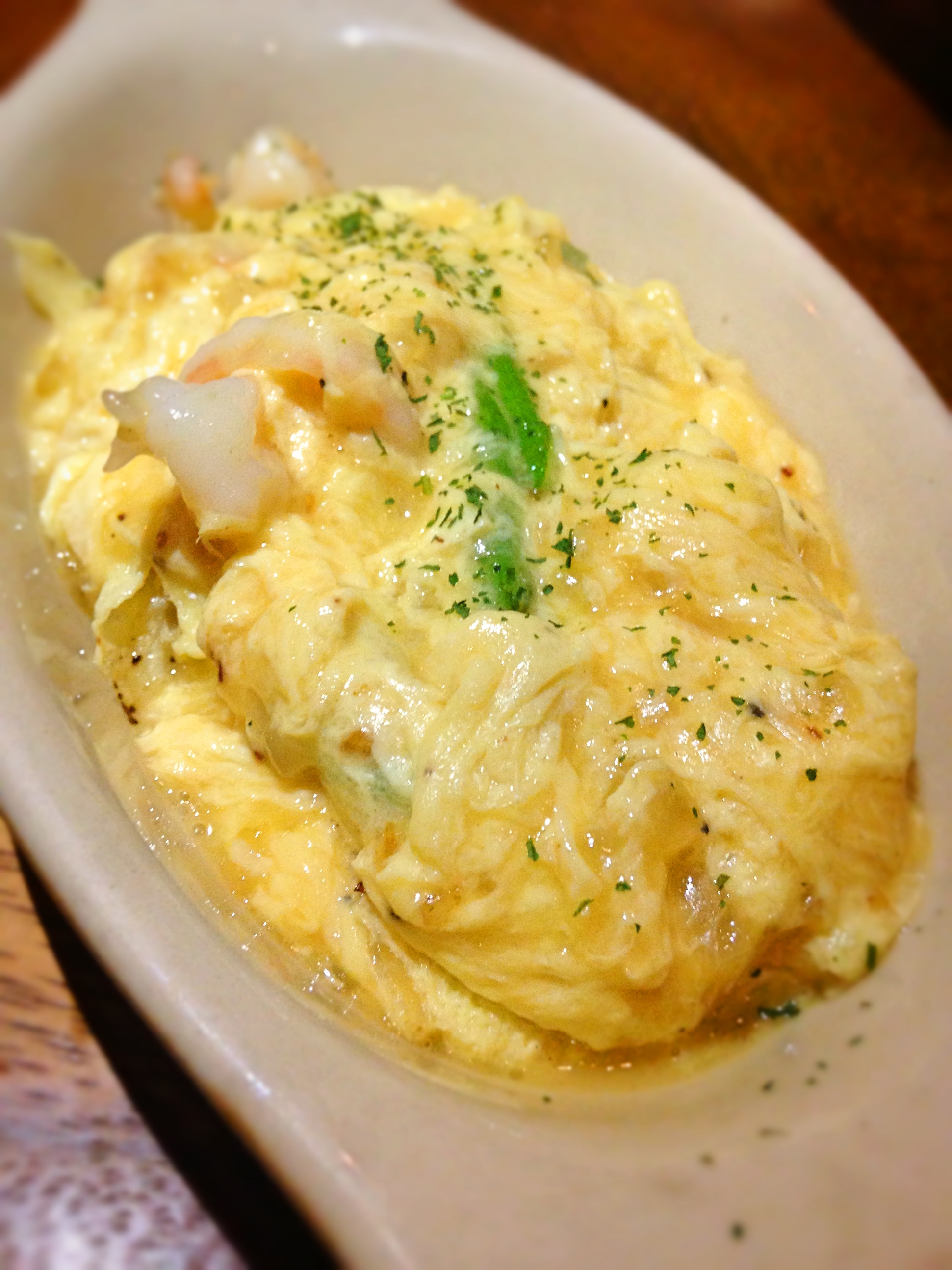 Revuelto de Espárragos y Gambas. Scrambled Eggs with Asparagus and Shrimp ($10). I like my scrambled eggs still a little runny, so this was a good consistency for me. 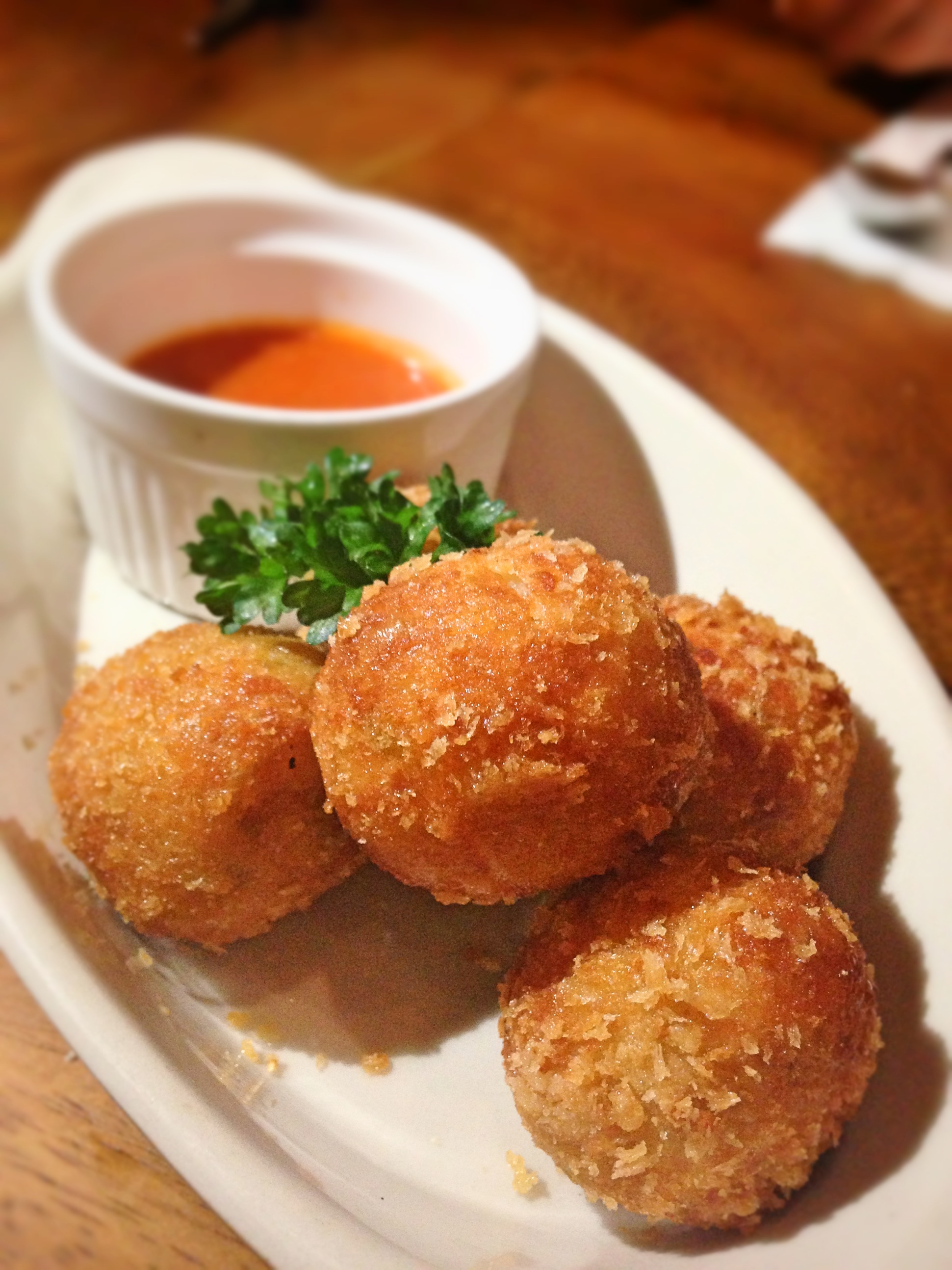 Croquetas con Jamón. Croquettes with Cured Spanish Ham ($16). What’s not to like about fried potato and ham? 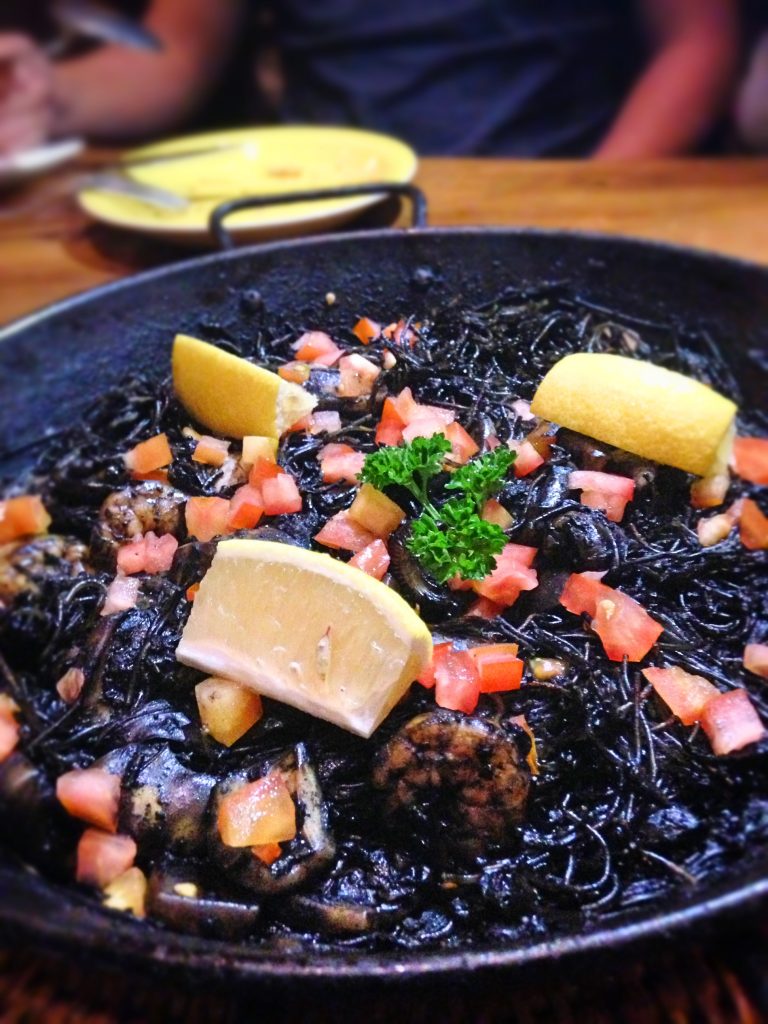 Fideuá Negra. Squid, shrimp and pasta, cooked in squid-ink ($30/$45/$60). This pasta was cooked entirely in squid-ink, and the saltiness comes from the ink itself without any salt added. A very natural flavour, but I still felt it was a bit over salty for me. However, its really good to taste the squid-ink infused so deeply in the pasta. 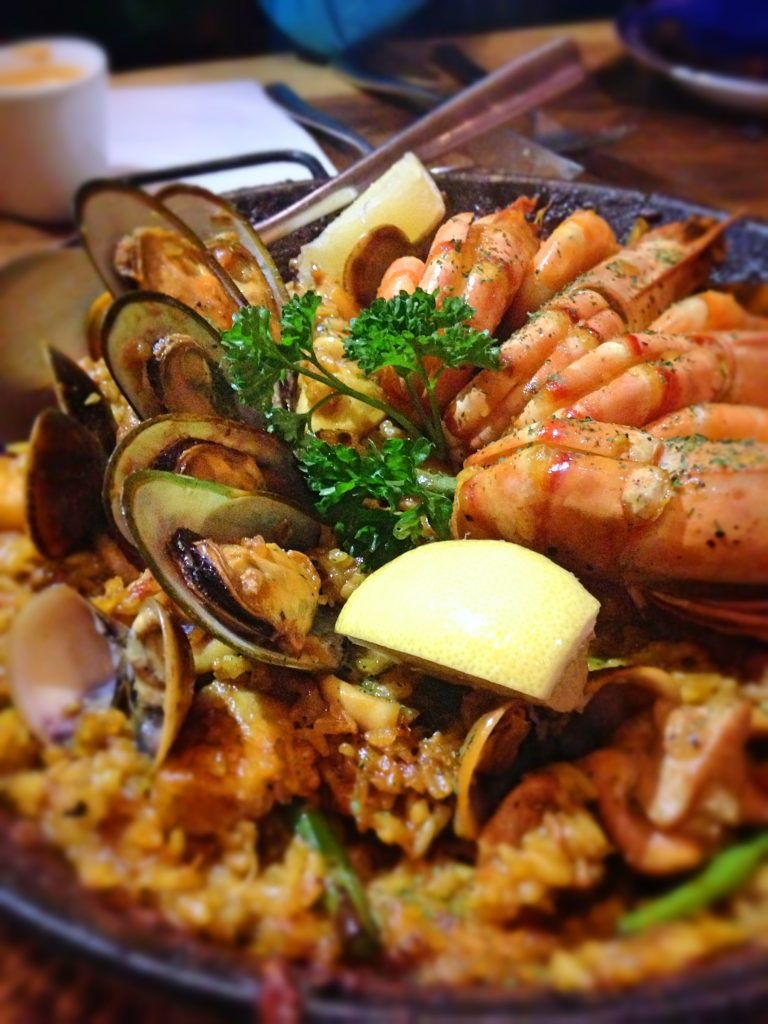 Paella Especial Don Quijote. Tiger prawn, clam, mussel, chicken pieces and rice cooked in saffron stock ($48/$78/$98). A very strong, flavourful Paella overflowing with seafood. The Paella rice was a tad mushy, more to the texture of risotto rather than Paella, which is a little more dry with a crisp on the top. The saffron infused broth stock was good but again, a little too salty for me like the pasta.

Don Quijote strives for rustic, simple dishes that express the homely Spanish culture. When I was in Barcelona, I found many of the local dishes to be flavourful, and at times overly salty for me as well.

Ken Lim, owner of Don Quijote restaurant, has travelled extensively to various regions of Spain to bring this authenticity back to Singapore. Whether or not to tweak the authentic flavours to a more localized level is a business call that affects its legitimate recipe origin, yet paradoxically might be more locally palatable.

As an overall view, most of the dishes in Don Quijote have got the flavours and seasoning spot on, but I feel there are slight technical mishaps like overcooking that need to be solved in the kitchen. The seafood is also very fresh, delivered almost daily from the local port. Click on the links below for the next menu review.