Gather The Misfits: Have A Mischievous Time With Board Games & Light Bites At This Cafe & Bar On Rangoon Rd

Unless you live in the North-East, you probably don’t frequent Rangoon Road much. While the area is not as well-known as Tiong Bahru or Tanjong Pagar, it is home to a range of cafes, from Old Hen Coffee Bar to Oriental Ice Bistro. Replacing what used to be C Plus cafe is Gather The Misfits, which is a cafe by day and a bar by night. 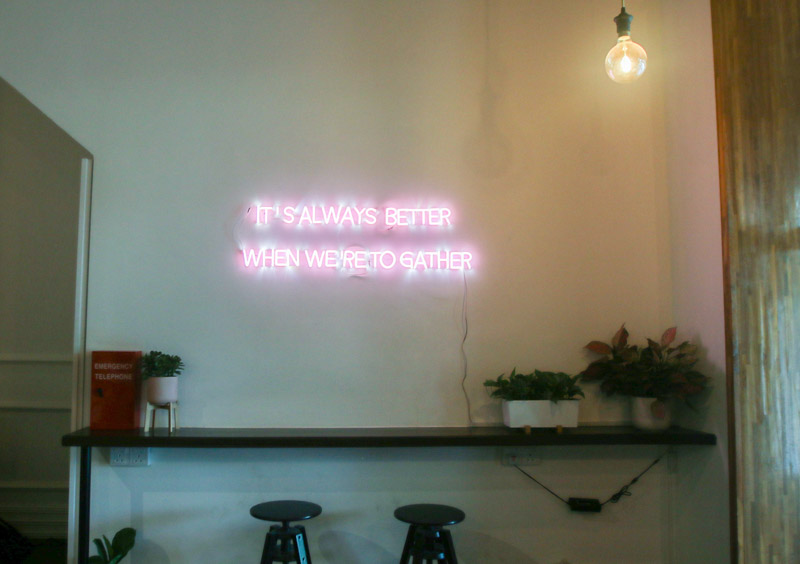 As clichéd as it sounds, I was immediately drawn to the neon light signage, which I had mentally marked as an Instagram-worthy spot. With the wooden furniture and plants scattered around the space, the interior had homely and cosy vibes. 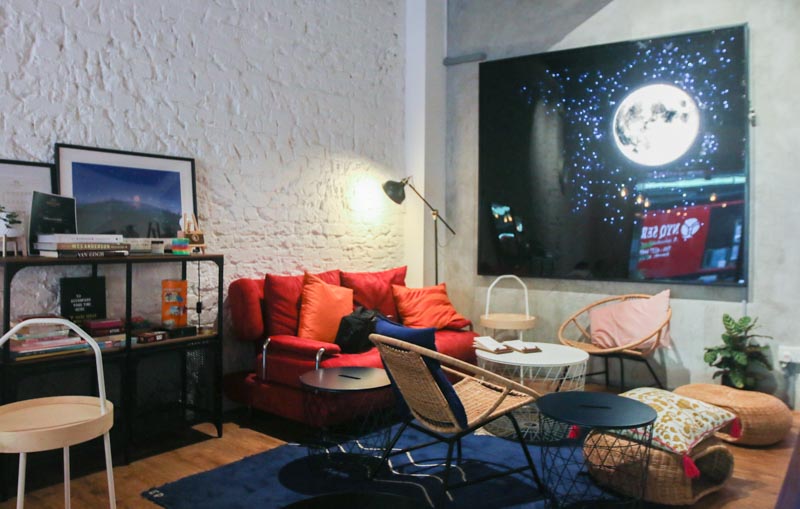 There is even an elevated seating area which is perfect for an intimate gaming session with your friends.

I hardly chance upon actual cafes that offer board and card games, so the child in me jumped at the opportunity Tucked away at the back of the cafe is a mini retail store, which is easy to miss unless you walk by on the way to the restroom. They sell a variety of notebooks, flowers and dining-ware—think of it as Etsy-meets-Naiise. 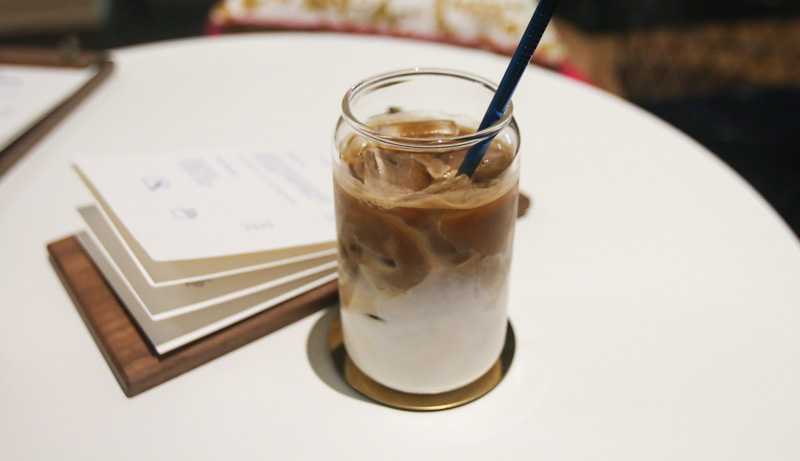 After settling down at my table, I ordered some iced Cafe Latte (S$6) to combat the “Z monster” that was creeping in.

I liked that the coffee didn’t taste watered down, yet the flavour of the espresso was not overly bitter. 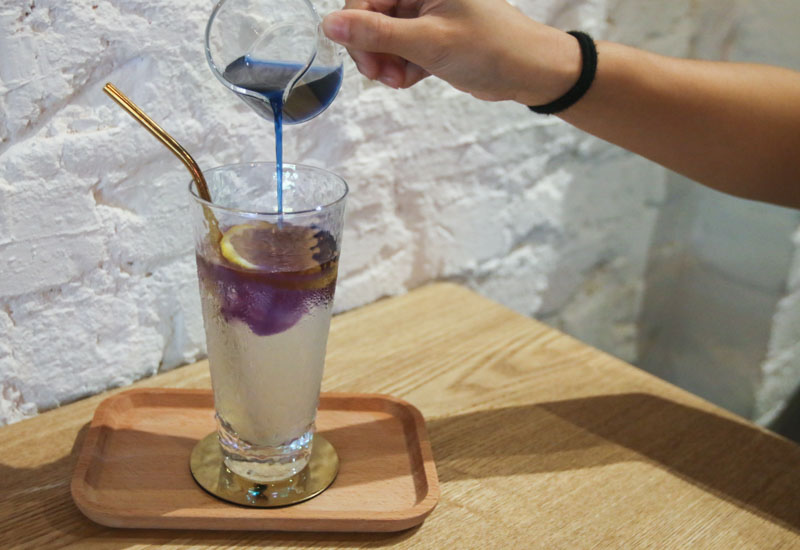 Having gotten some caffeine in my system, I moved on to try their Blue Pea Lemonade (S$5.50).

I liked how the lemonade was served with a side of blue liquid that you can pour in, which provided the perfect opportunity for an Instagram boomerang. Watch the lemonade change from clear to purple! Sadly, that was where the magic ended. I only noticed the slight taste of lemonade, which I would have preferred to be stronger since there wasn’t any flavour contribution from the blue pea flower colouring.

Their food menu is still very much in the works, so there wasn’t much to choose from. We ordered some of their Toasties to try, because bread is always a good idea. 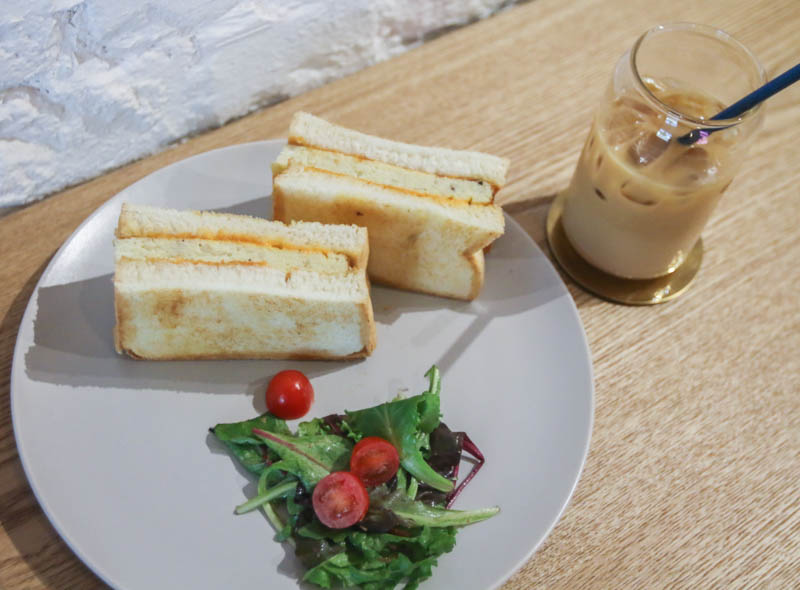 If you’re vegetarian, you can go for their Cauliflower Gatau With Spicy Mayo (S$9).

While “mushy” isn’t the best description of food, the filling was indeed soft and mushy; a smooth paste with some cauliflower chunks and eggs. And somehow, it went well with the crispy toasted bread.

Oddly, the spicy mayo dressing reminded me of nacho cheese. It was probably because of the pickled chilli and mustard used in the dressing. which kind of resembles the hint of spice that I get from nacho cheese. I thought the bold flavours of the spicy mayo complemented the plain cauliflower filling nicely. 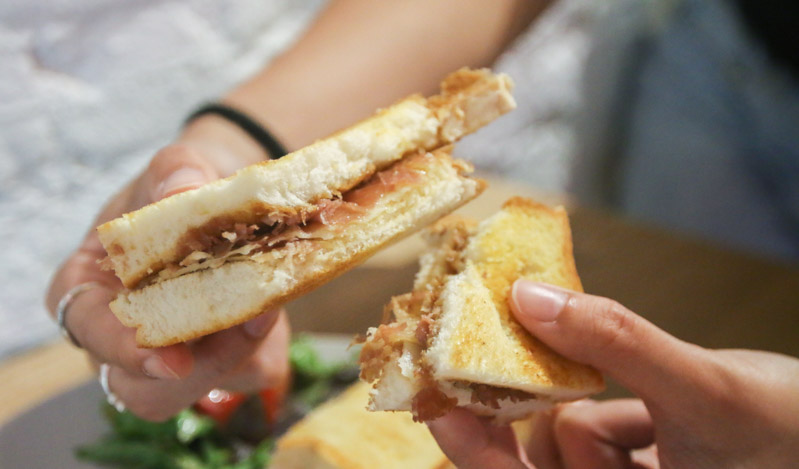 For a meat option, we tried the Prosciutto With Black Garlic Mayo (S$13).

The savoury cured ham was the perfect appetite kick-starter, and the bits of cheese added some texture. However, I could not really taste much of the black garlic mayo, which would have been better if it was stronger.

I also thought that the toast was a little plain, and could have used some tomatoes or lettuce for crunch. 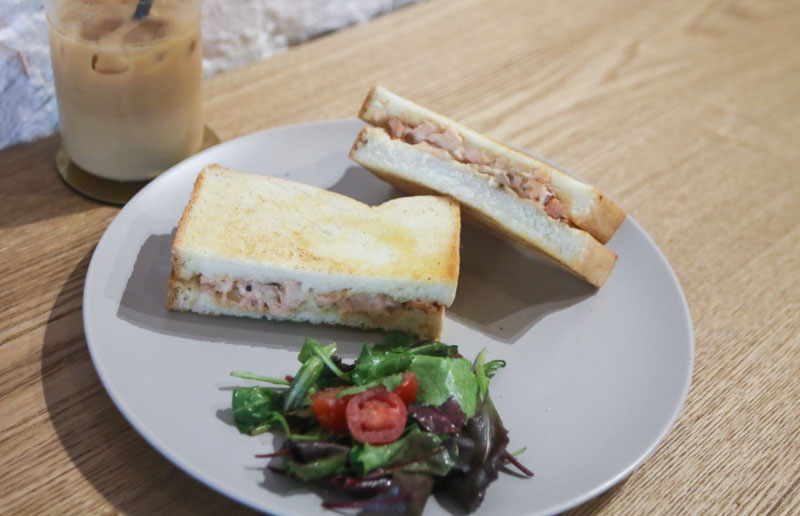 Next up, we tried their Smoked Fish With Bonito Cream (S$13). They used salmon, which was soft and flaky, though I did not taste much smokiness. A pity!

While I understand that salmon can be pricey, I personally would not pay S$13 for this variation on a simple tuna sandwich. Same goes for the rest of the other Toasties, which I feel can be found at a more affordable price at other places and those would come with more fillings. Moving on to dessert, we went with their Earl Grey waffle topped with a scoop of pandan ice cream (S$9.50).

I liked that the waffle was fluffy, though I thought it could’ve used some crispiness on the edges. 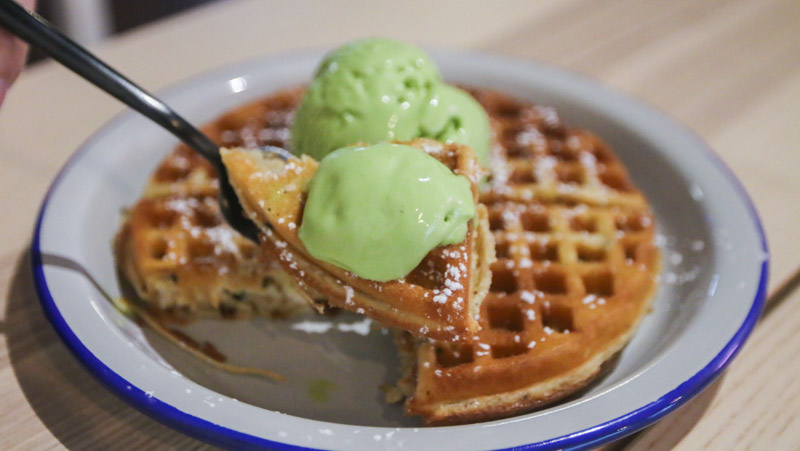 I was disappointed that I could not detect much of the Earl Grey tea flavour in the waffle, so I would suggest trying the pandan batter instead, which might have a prominent taste.

The pandan ice cream was fairly light in flavour, and while I didn’t mind it, a more distinct fragrance would have complemented the already plain waffle better. Don’t be alarmed if you see the lights dim at 6pm, because that’s when the cafe converts into a bar concept (217misfits) from Wednesdays to Saturdays.

If you’re interested, they also frequently organise events at their space, like pizza tastings and beer pong nights. 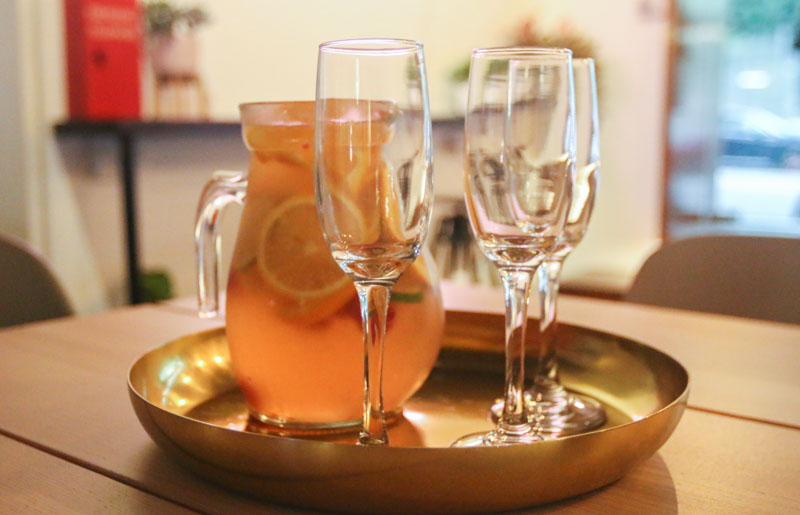 We tried one of their newer drinks, the Mamma Mia Sangria, priced at S$108 for a 1.5-litre jug. Instead of using Spanish red wine which is commonly found in sangria, this one uses Prosecco (sparkling white wine). There was also an addition of vodka and limoncello liqueur.

For the fruity part of the drink, they used a blend of raspberry, lime, lemon and orange. They helped to provide a hint of sweetness and sourness, which helped to mellow down the acidity of the alcohol.

I liked how they opted for sparkling wine, because it gave the drink a nice fizz. And even though the ethanoic taste from the vodka was strong, the drink did not burn, and glided down the throat smoothly. 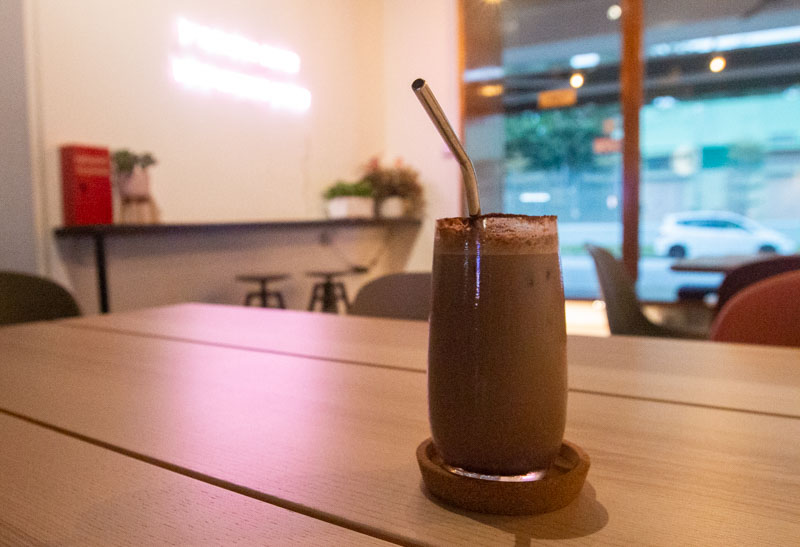 If you’re someone who does not enjoy the strong taste of alcohol, Stylo Milo (S$14) could be the drink for you.

It is a concoction of Milo, Amarula (a hazelnut cocktail and fruit-based liquor) and rum, but I basically tasted no hint of alcohol at all.

Thanks to the muted alcohol taste, the drink goes down the throat smoothly and can be pretty dangerous if you drink too much at once. Remember to pace yourself if you do try it out! They also serve bar bites, which makes great finger food to pair with your drinks.

Even though everything tastes good when you’re tipsy, I have to say that their Popcorn Chicken (S$9) and Seaweed Chicken (S$9) impressed me. They were crispy on the outside, while meaty and tender on the inside. The accompanying sauces including sriracha mayo and wasabi mayo also provided a kick of spice to the chicken.

Paying for the two items on their own is pretty pricey, so I would suggest getting the combo of seaweed chicken, popcorn chicken and fries at S$12 instead.

While I don’t think I could justify paying over S$8 for the Toasties, I would not mind going for the waffles and coffee again. I personally prefer the bar menu, and would highly recommend a night with your friends for a round of drinks.

I also particularly enjoy the chill ambience that the space provides, and would love to head back again for a session of card or board games.

A game of Limpeh Says over some beer, anyone?