Traditional stalls are disappearing from our hawker centres every day. That’s why Hainan Cuisine & Snacks (海南小吃) is such a gem—because nothing like it exists in Singapore anymore. 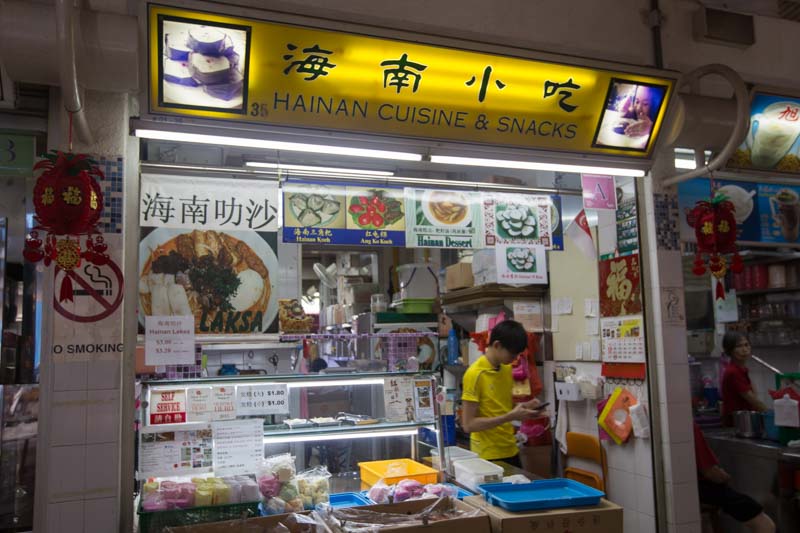 Located at Kim Keat Palm Market and Food Centre, Hainan Cuisine & Snacks has been making traditional Hainanese kueh and other snacks for the past 40 years.

It was started by Mdm Yeoh Min Lin, who ventured into the kueh-making business by circumstance. After her late husband passed away, she had to single-handedly support her five children and decided to sell bread and butter at the market right next to Kim Keat Palm Market and Food Centre. After that, in order to set her stall apart, she decided to specialise in Hainanese kueh.

Now, Mdm Yeoh has retired and has left the kueh making to her daughters and grandchildren. Kim Keat Palm Market and Food Centre is home to many old stalls, such as Kim Keat Wanton Noodle and Tong Fong Fatt Hainanese Boneless Chicken Rice, and it shows in the building’s appearance.

Though the hawker centre has arching ceilings, it’s still dimly lit and humid, with the only source of ventilation being the revolving fans stationed at the occasional corner.

When I visited for lunch on a regular weekday, the smell of raw fish wafted in from the wet market located right next door. It’s not the most glamourous or cleanest hawker centre around, I’d give you that. Hainan Cuisine & Snacks sells a variety of Hainanese snacks, the most popular of which was its Homemade Yi Bua (S$1.20).

The stall also sells other kuehs and desserts, such as “Chicken Poop” Dessert (a soup-based dessert with noodles shaped like chicken poop), tau sar piah, and other snacks like bread. I’m not Hainanese, so the Yi Bua was completely new to me. Its sticky and warm texture reminded me of chwee kueh, but the way it was wrapped with a banana leaf and topped with a red dot made me think of ang ku kuehs.

It looked seemingly ordinary on the outside, but I knew the minute I opened it, it’d be a whole different story. Fair warning—there’s no way to unwrap this kueh without using your hands, so my dining companion and I ended up getting our hands sticky.

It was wrapped delicately around its sides, as well as its bottom, and the banana leaves clung to the sticky kueh so much that we had to pry the leaves from the kueh. 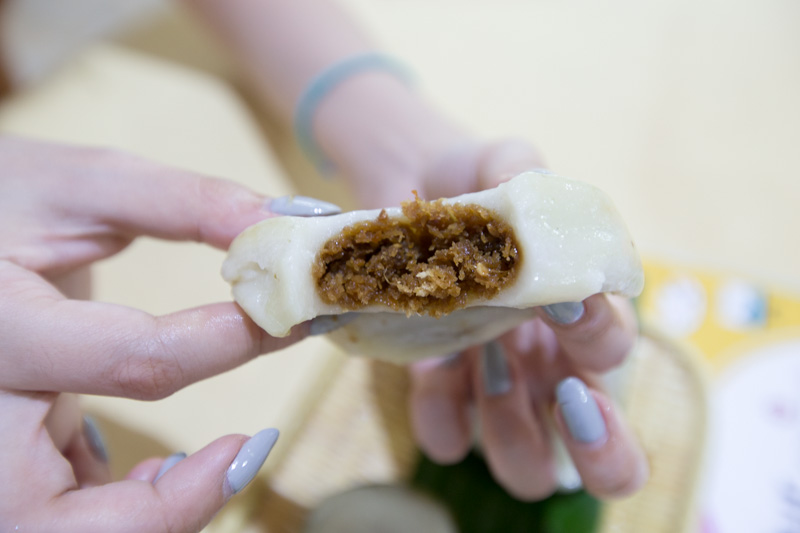 Upon biting into the Yi Bua, I was immediately hit by a sharp and zesty taste. I realised that it was the grated ginger, which was fragrant and instantly overwhelmed my taste buds. It was only with my second bite that I could taste the other flavours: the roasted sweetness of the gula melaka, the creaminess from the coconut, and the subtle crunchy nuttiness from the sesame seeds.

In particular, I really enjoyed how the grittiness of the grated coconut and ginger acted as a nice contrast against the smoothness and stickiness of the glutinous rice flour.

While my dining companion didn’t particularly like how strong the ginger taste was, I found it refreshing and indulgent at the same time. I could see myself ordering one Yi Bua for breakfast and eating it with a kopi o kosong on the side. Hainan Cuisine & Snacks also sells Hainan Laksa (S$3), which is the only main dish on its menu.

For just S$3, I got a small bowl of noodles with a ton of ingredients, such as fish cakes, tau pok, cockles, half an egg, a dollop of chilli, and more. Some say that laksa originated from the Peranakans while others claim it came from Penang, but this was the first time I heard that there was a Hainanese version of this local favourite.

Unfortunately, I couldn’t see or taste any unique differences between this bowl of Hainanese laksa and the other bowls of laksa I’ve tried. All its ingredients were the same and the taste was pretty similar as well.

I’m not saying that it wasn’t delicious—in fact, it was pretty yummy. The Laksa was piquant and spicy, and the coconut milk was fragrant and added a rich creaminess to the laksa gravy. However, was it uniquely Hainanese? I’m not too sure about that.

It’s heartening to know that traditional stalls like Hainan Cuisine & Snacks still exist nowadays and that it hasn’t faded away with the onslaught of time and modernity. Being able to taste authentic Hainanese kuehs like Yi Bua was refreshingly nostalgic, and I’d recommend everyone try it at least once before this rarity disappears for good.