Where to eat: 12 stalls at Hong Lim Market & Food Centre worth fighting the lunch crowd for

Located just beside Chinatown Point, Hong Lim Market & Food Centre is more accessible than ever with the implementation of the Downtown Line.

With a slew of established crowd favourites and even a Michelin Bib Gourmand awardee, here are 12 stalls in Hong Lim Market & Food Centre you’ve gotta try. A favourite amongst the lunch crowd, Ji Ji Wanton Noodle Specialist has been serving up delicious and affordable wanton noodles for years now. While the Wanton Noodles here start as low as S$3, we decided to go big with the S$5 portion.

The result was a generous portion of noodles tossed in a fragrant oil and black sauce with tender char siew. The wantons here were huge, well-marinated and came with small shrimp in the mix as well.

The stall owner let us in on a little secret: the meat pork filling is made with lean fat containing only 2% fat, whereas other places use as much as 60% fat. Indeed, each bite was smooth with no chewy lumps of fat at all. 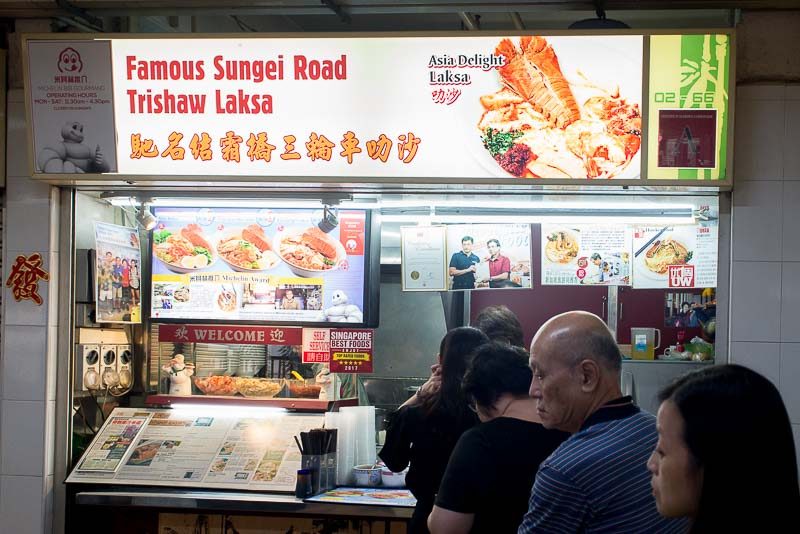 Having received the Michelin Bib Gourmand award consecutively every year since 2016, Famous Sungei Road Trishaw Laksa was an eatery located at Hong Lim Market & Food Centre which we were most excited to try. The most noticeable thing about the Asia Delight Laksa has to be its broth; it is milder and less cloying than, say, the Katong laksa-style which features a much more lemak-filled gravy. Even with only a subtle hint of coconut milk, the broth remained very rich and creamy. It was so addictive we finished every last drop of it!

Aside from this, the fresh prawns and cockles were also a lot more succulent and sweeter than that found in most stalls around the neighbourhood. If you’re craving laksa but worried about your calorie intake, you know where to go. Embroiled in a rivalry with another curry chicken noodle stall on the second floor, many consider Heng Kee Curry Chicken Bee Hoon Mee to be the original hawker of the ‘Heng’ name.

Priced from S$5.50 a bowl, our Chicken Curry Mee arrived with a heap of ingredients. While I’ve heard accounts of the broth here being less rich than its rival above, I actually found it to be satisfyingly thick without being too cloying. In fact, it was addictive.

However, it turned out that it was this thick because I visited when they were about to close for the day, which meant that their gravy had been greatly reduced. So fair warning, if you prefer thick curry, try to visit when they’re closing. 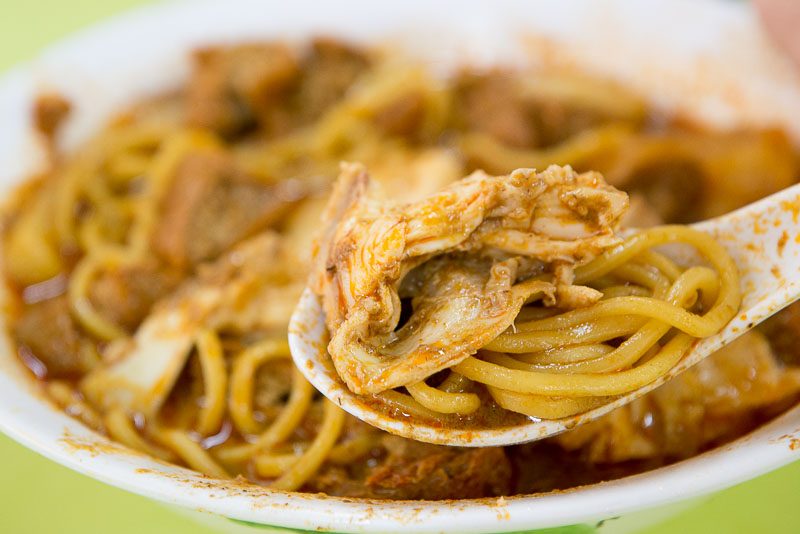 The noodles here are nothing to shout but the generous serving of chicken slices, despite its dry appearance, was actually decently moist and tender. The potatoes, having been slow-cooked for hours, were extremely soft as well.

This is definitely a dish curry lovers should not miss! 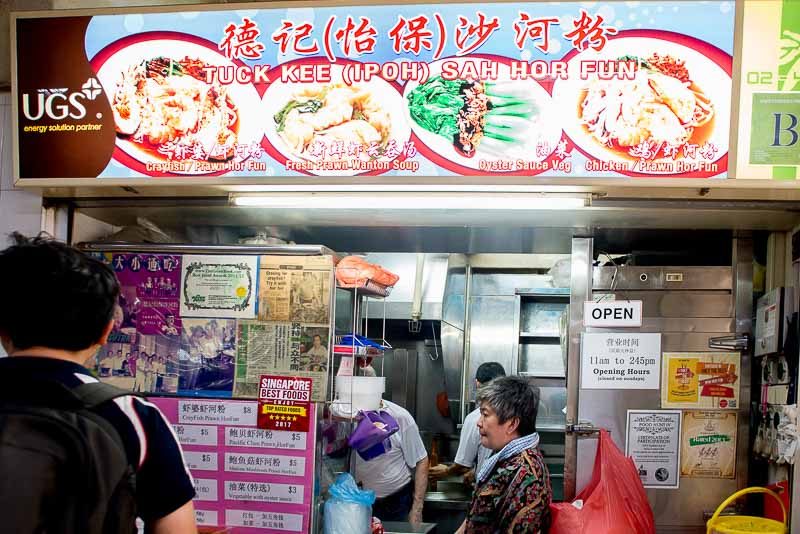 With 40 years worth of history and notable long queues, it’s not difficult to spot Tuck Kee Ipoh Sah Hor Fun at Hong Lim Food Centre. Serving up delectable hor fun at affordable prices, feel free to opt for prawn-topping options starting at S$6 while the crayfish-prawn option will only set you back S$10. The thing that struck us first was how large the prawns were in our plate of Crayfish Prawn Hor Fun (S$10). Sweet with a light crunch, they were also halved to make it a little easier to eat.

Here, the vibrant-coloured crayfish roe was a pleasant bonus as it managed to elevate the texture of the entire dish. Similar to the classic Hong Kong shrimp roe noodles, you can choose to mix the roe into the hor fun for an added crunch. Apart from the well-executed crayfish, the seafood stock used in this plate of hor fun also impressed us with its intense and savoury aroma. Generously drenched on the silky smooth rice noodles, the gravy elevated the flavour of the entire dish, resulting in addictive slurps that will keep you going till the very last bite. 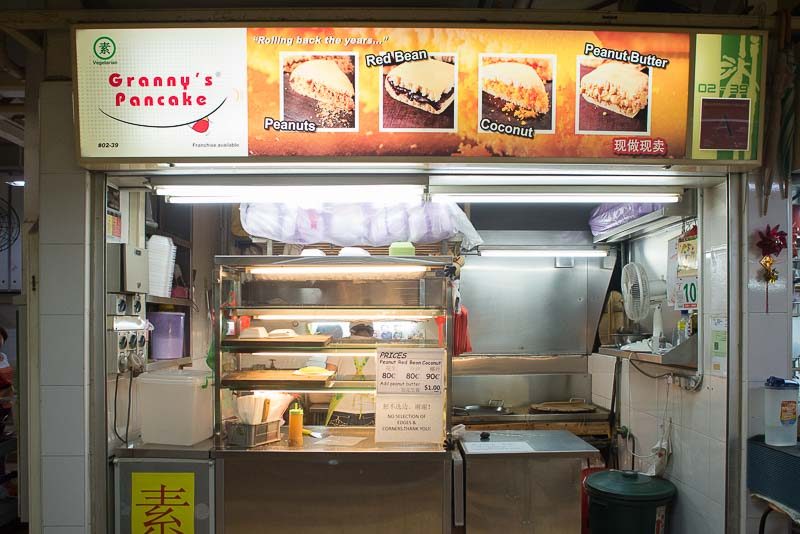 Opening from 7am till they sell out, Granny’s Pancake sells affordable ban chang kueh and has a pretty group of loyal customers as well. When we reached around 1.45pm, they were already down to their last three pancakes. The Peanut Butter Pancake (S$1.20) was fluffy and slightly moist while the amount of peanut fillings were decent for its price too. The additional peanut butter gave the peanut filling and the pancake a creamy texture that was different from the peanut pancake.

If you are someone who enjoys different dimensions of texture in your food, you will fall in love with this. Just be sure to get there early or you might not get your preferred filling!

While the smallest serving of Ba Chor Mee (S$6) may seem a little steep, keep in mind that you are paying a premium for a bump in quality compared to your run-of-the-mill ba chor mee stall. 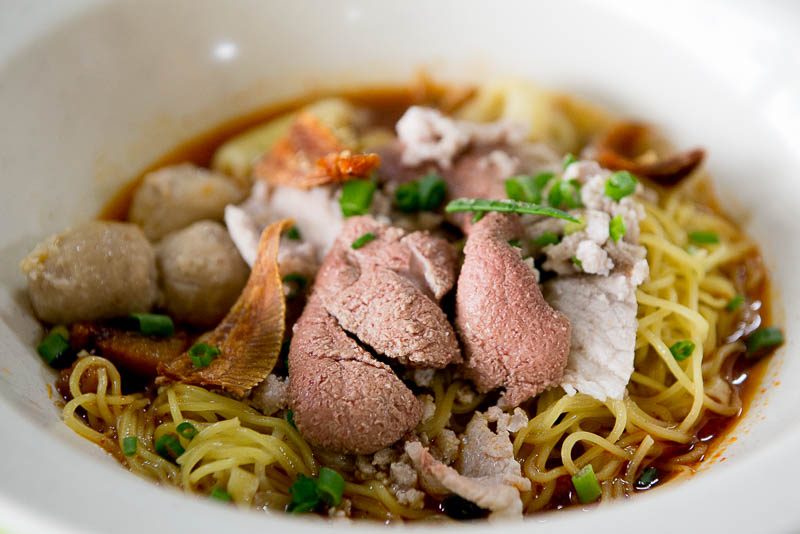 The noodles here were springy and well-coated in the fragrant soy-vinegar sauce base. The slivers of pork liver were soft and tender as well.

The meaty dumplings, while an uncommon topping in ba chor mee, was a welcome one with its well-marinated minced pork. The only gripe I have was the toughness of the pork slices; it came either overcooked, really lean, or a combination of both.

Otherwise, it was still a great bowl of noodles. 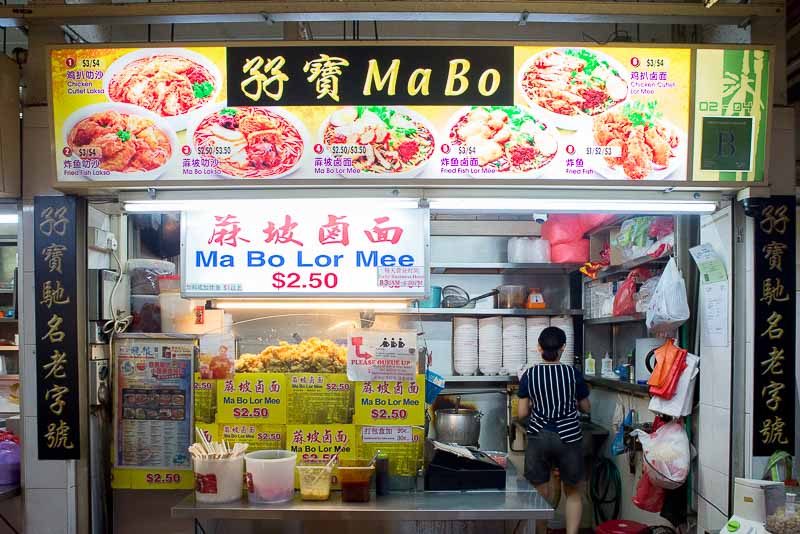 With several branches around Singapore, Ma Bo Lor Mee prides itself on serving great tasting and affordable lor mee to the masses. With the smallest potion going at just S$2.50, we were certainly convinced. The standard Ma Bo Lor Mee (S$2.50) came with a single fish fillet, thick yellow noodles, fish cakes, half an egg and braised pork. Not only was it extremely fragrant, it looked exceptionally appetising, whetting our appetites with just its appearance alone.

While most of the ingredients here seem pretty average and common, what made this dish stand out was the taste of its gravy. Viscous with a starchy gooey consistency, the sauce was immensely satisfying with a hint of sweetness that stood out beautifully in the sea of savouriness. 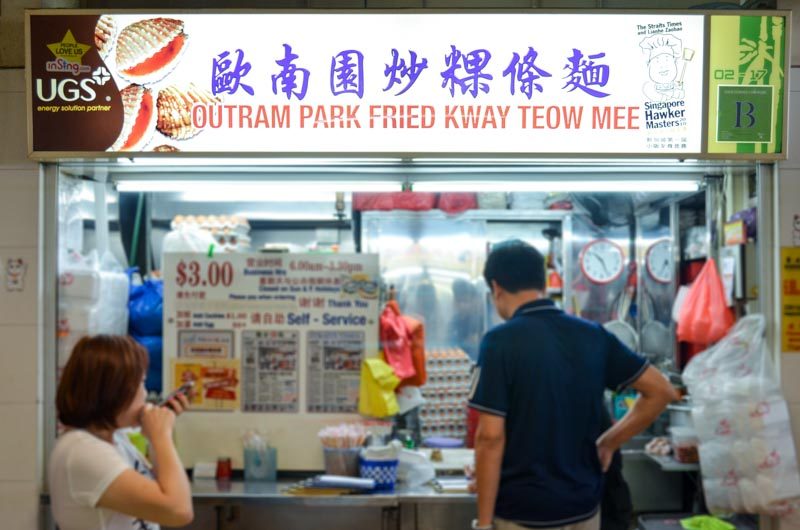 With seemingly never-ending queues that can keep you waiting for as long as 90 minutes, Outram Park Fried Kway Teow Mee is one stall at Hong Lim Market & Food Centre where you can’t use the ‘I’ll-wait-till-the-queue-gets-shorter’ approach simply because the queue only gets longer. 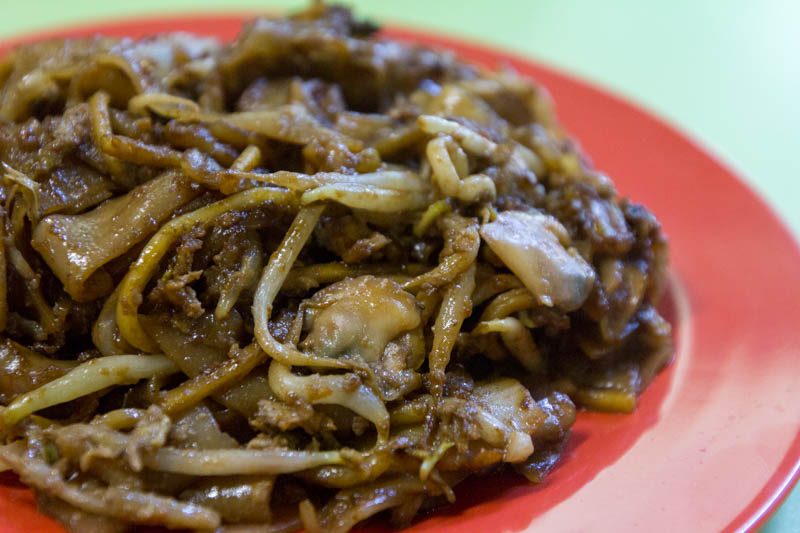 Filled with the smokiness from the wok hei, the hawker’s Char Kway Teow (S$4) boasts sweet and savoury noodles fried with an intensely aromatic dark sauce as well as a generous amount of cockles. Sadly our only disappointment was the lack of pork lard that was fired into our plate.

Compared to other char kway teow, Outram Park Fried Kway Teow Mee’s noodles are definitely wetter thanks to the owner’s unique method of frying the noodles with the eggs first, resulting in a creamier texture which thankfully made up for the absence of our favourite porky bits. Unlike its competitors in Hong Lim Market and Food Centre, Belly Lucky Noodles stands out by serving up a different breed of wanton mee: the fusion kind. Ordering here is simple enough, since the hawker only offers two dishes: Char Siew & Dumpling Noodles (S$5), and Dumpling Soup (S$3). Presentation-wise, the plate of Char Siew & Dumpling Noodles might not be the prettiest, but the size of the dumplings in the accompanying soup was what really impressed us. Each dumpling was bursting at the seams, stuffed with minced meat, diced prawns, water chestnuts, and mushrooms. Here, the noodles were springy and firm without the uncomfortable alkaline after-taste. However, the star of the dish had to be the char siew. Glistening slices of fatty pork awaited on the plate. They were well-marinated, sweet and savoury, the kind of taste and texture that will leave you craving for more. A cosy stall located at a corner selling a variety of noodles and rice, Cantonese Delights is a stall that you will never miss during your visit to Hong Lim Market and Food Centre. By the looks of the snaking queue forming at the storefront, you can be reassured that you will be in for a treat. The chicken cutlet was juicy, smoky, and soft. Encasing the succulent pieces of white meat was a thin crust—savoury and crisp to perfection. Elevating the brilliance of this dish was the curry gravy. Don’t forget to request for your plate to be drenched with this fiery orange goodness as the fragrance and richness will blow your socks off just like it did to ours.

Love yourself a bowl of warm and comforting soup on a cold rainy day? Head to Dong Fang Hong Sotong Ball Seafood Soup. The eatery prides itself on its handmade sotong, fish and meat balls which are proudly showcased in the only item on their menu, the Sotong Ball Seafood Soup (from S$4.50). Uneven in shape, the trio of balls in the soup are freshly made daily to ensure its taste and quality. The ball that impressed us the most was none other than their sotong balls. Prepared using specially sourced squid paste, these balls had an intense briny flavour and a unique chewiness that captured our hearts.

If you can’t decide on a staple to go with this immaculate tasting bowl of soup, take our advice and try it with the Ee Mee (+S$0.50). We kid you not, but these eggy noodles perfectly complemented with everything the humble dish had to offer!

Duck confit from a hawker stall? You heard that right. Nestled in the upper floor of Hong Lim Market & Food Centre, Eddy’s serves up exciting fusion cuisine at affordable prices. To make things interesting, each dish is spiced up a notch with the addition of unique ingredients like mala spices and hae bee hiam, an addition that gives spices the food up with a local touch. The most eye-catching menu item would be the Duck Confit (S$10), a classic western dish that involves cooking duck in its own fat over long periods of time. At Eddy’s you can opt to have your piece of duck with either the Aglio Olio Spaghetti or Mashed Potato as your carb pairing. If that’s not enough, the dish comes served with corn on the cob and a side of coleslaw!

If you’re hankering for pasta, fret not. The Mala Shrimp Spaghetti (S$7.50) also offers a spicy and savoury mix of flavours that is sure to whet your appetite. Served with mushrooms, cherry tomatoes, and broccoli, you’ll definitely get a well-balanced and filling meal here at Eddy’s.

Aside from these stalls, Hong Lim Market & Food Centre still has many more great and affordable hawker stalls. If you haven’t been here for a meal yet, you’re truly missing out.